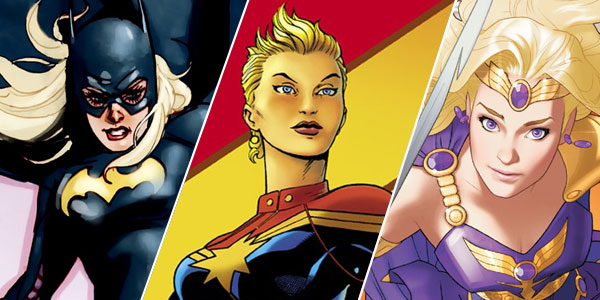 You may not know this, but I fancy myself quite the ladies’ man. In truth, I’ve always had much more of a soft spot for female super-heroes than for their male counterparts. Maybe it was because they seemed to have worked so hard to get where they were. Maybe it was the fabulous outfits (looking at you, Dazzler). Or maybe it was because they kicked as much ass as their gentlemen teammates, but never seemed quite as macho about it. Whatever the reason, today my pull list is as heavy in estrogen-fueled awesomeness as it’s ever been. 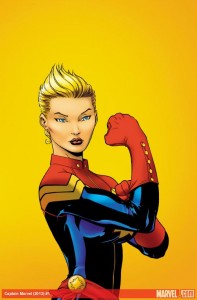 As another San Diego Comic-Con (SDCC) looms, last year’s debate on women in comics seems just as topical as ever. For those just tuning in, amidst an extensive public relations push for DC Comics’ New 52 relaunch came a fury of fan discourse, inspired by one vocal fan dressed as Batgirl. This was not just any Batgirl, mind you, but Stephanie Brown, whose title was ending after two years and being replaced in the new universe. Since her book’s cancellation, Stephanie Brown has become the poster child for much fan criticism and support, but that day it was one eager, thoughtful woman who took the limelight.

The Batgirl of San Diego, as she has since been dubbed, stood up at multiple DC Comics-sponsored panels and simply asked, “Where are the women?” Reaction was mixed, but what clearly evolved was a greater dialogue about the market for, interest in and commitment to more female characters gracing the pages of our favorite super-hero comics. One year later, my hope is that the seeds of last year’s debate have produced more fruit for the industry in this arena.

So, before we all strap into our traveling pants — metaphoric or literal — let’s see where we’re at with the Big Two, DC and Marvel Comics, for female comic characters. Three categories for measurement stood out for me in looking at the last year of publishing: female-led ongoings launched since SDCC, ongoing ensemble books with 40% (or more) featured females, and female-led mini-series or one-shots solicited in the last year.*

DC and Marvel are fairly well-paced with each other in the latter two categories, but the obvious gap here is in female-led ongoings. I hate to be partial, but with a 12:1 ratio for ongoing titles with women in lead spot(s), DC seems to have something figured out that Marvel is still missing. Last month, 6 of DC’s 12 female-led titles were in the top 50 comics listed on the Diamond Distribution sales charts. Clearly, it’s time for the old trope of fanboys not wanting to support “girly comics” to be retired.

In the spirit of positivity, however, I generally like to focus more on what is possible, rather than deficiencies of the past. Both companies have room to grow in their representation of female characters, so what else can they do to make it happen?

Take advantage of the brand.
On first glance, it would seem DC embraces this concept wholeheartedly. In an era where the company logo may as well have pointed ears, there are several female-led books already spinning out of the Batman franchise. Batgirl, Batwoman, Catwoman — and to a lesser degree, Birds of Prey and Worlds’ Finest — all take advantage of their parent brand’s popularity while maintaining what makes each of them unique and powerful. It would seem like a no-brainer to put together some titles for the ladies whose looks and origins are deeply engrained in Marvel’s key brands. The key is to make each one individual in their missions: An old school comedic take on She-Hulk? A crime noir-inspired Web of Spider-Woman? Thor Girl’s first day of high school? Even the Red She-Hulk Betty Ross could make a compelling central figure for a horror-themed book. Also, with the recent raised profile of Aquaman in the market and the spotlight she received in hot seller Blackest Night, what about an Aquawoman book starring Mera? 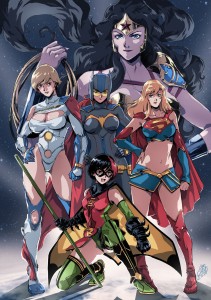 Spin out of success.
Both Marvel and DC have had their share of mega-successful team books that are chock full of characters readers have come to love and cheer on. For instance, Stormhas been a key member of the X-Men who is consistently popular with fans and creators, yet in over 35 years has never had her own ongoing series. Rogue too seems like a natural to headline her own book, having only gotten one shot in the last 30 years to shine in a solo. Both of these characters, if written with the same care as in their team books, could blaze up the sales chart. Black Widow was arguablythecentral hero of this year’s Avengers movie, but didn’t have more than a two-issue mini-series on the stands for interested viewers. This summer, Marvel is banking on the popularity of Gambit and Hawkeye, so why not their equally (if not more) favored female teammates? Across the street, the New Teen Titans’ Raven has a ton of potential as a unique solo character spinning out of that hallmark group, and is particularly ripe for exploration in a rebooted DC continuity. Add to that the relative success of DC’s Dark line and you have a recipe for success.

Reconfigure your bench.
With so many characters, male and female, off the table temporarily with DC’s reboot, this is a prime time for them to look at what’s missing in their publishing line. Something Marvel has done so expertly over the years, from yesterday’s New Mutants and Generation X to today’s Avengers Academy, is present younger characters in an educational environment. DC has not had any team books set in a school setting, to my knowledge, ever. How about a Bat-Girls Inc. title, featuring young girls inspired not by Batman, but by Batgirl, to team up, fight crime, all while getting their high school homework in on time? Senior class president Cassandra Cain, junior cheerleader Stephanie Brown, sophomore goth Black Alice, and freshman nerd Misfit band together for unorthadox afterschool bat-activities, all the while being watched from a distance by their red-haired math teacher, who just happens to use a wheelchair. Or how about revive The Witching Hour with Traci 13, Nightshade and Jinx, three high school witches living a “charmed” life, beating their curfew (barely) and saving the world from demons and dark magic? Meanwhile, critically acclaimed Marvel series Alias and its protagonist Jessica Jones has been on the shelf gathering dust for years. Never a better time to experiment in the comic market with dusty intellectual property than now!

Genderbend.
As much as I think it’s a fallacy that male readers don’t want to read about female protagonists, I do believe in the saddening theory that most DC and Marvel fans are not overwhelmingly interested in completely new characters, particularly as title leads. Reintroducing or reinventing older characters, but swapping their gender has a long history with both companies. Monica Rambeau (Captain Marvel), Courtney Whitmore (Star-Spangled Kid), Ava Ayala (White Tiger) and Kate Spencer (Manhunter) all took on traditionally male costumed identities to interesting results. Could a new Doctor Mid-Nite be introduced as Doctor Charlotte McNider, blind avenger of Earth 2? Could a red-furred child of Azazel pop into the X-Mansion in need of help from Nightcrawler’s other family? Could the Atom appearing in May’s Free Comic Book Day special be Ryan Choi after all, sporting a gender-neutral name but be decidedly more female this time around? Maybe it’s time for Anissa Pierce to step up as Black Lightning herself, blazing a new trail in Gotham City with her partner Grace.

Create a new paradigm.
The Birds of Prey have been part of the comics landscape for so long that we forget how unprecedented it was. Barbara Gordon (Oracle/Batgirl) had never worked with Dinah Lance (Black Canary) prior to that first single-issue special. Canary certainly wasn’t part of the Batman family, but the pairing just clicked. Over a decade later, it’s almost evolved into an institution. Now is the time to create new mixes, pairings, concepts and connections, particularly for leading ladies at the Big Two. A S.H.I.E.L.D. book partnering Kitty Pryde with Mystique to reveal the hidden truth behind Destiny’s “death”? A new Brave and the Bold ongoing starring globe-trotting journalist Lois Lane uncovering some mystery about a different DCU hero every month? Or Sue Storm leading Medusa, Venus and the rest of The Invisible College across time and space to fix her husband’s mistakes without him finding out? The possibilities are literally infinite!

So, no matter what DC or Marvel has up their sleeves for San Diego this year, my hope is that the conversation about representation is having an effect, and not just with executives. If you’re a fan not diving in and supporting the female-led books that are currently being published by the Big Two, frankly you’re missing out. No matter what your feelings on the debate, one truism should never be put to rest: a good book is hard to find. And these are some freaking awesome books. Don’t miss out!

UPDATE 7/15/12: At San Diego Comic-Con, Marvel announced Red She Hulk as an ongoing series (continuing the numbering of Hulk) and DC announced Raven would be rejoining the Teen Titans. Also teased was the future of Doctor Mid-Nite in Earth 2 as “a him… or her!”