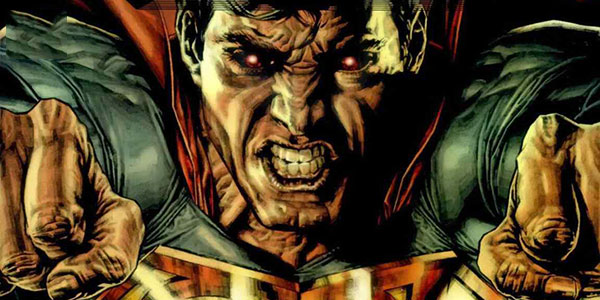 I’ve been pretty torn about writing this column — not because I am of two minds on whether the Man of Steel can kill in a story and have it remain a legitimate representation of what we call “Superman.” No, of that I am singularly sure that you can. I’m torn because I am alternately glad there is still enough interest in the topic to warrant pulling together some calm reasoning on the matter, and really goddamn tired of reading about it.

But here we are. 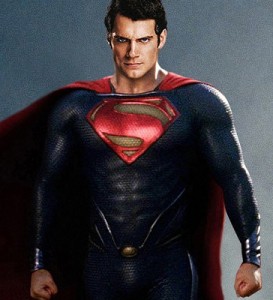 For those who haven’t seen Man of Steel in the theater yet, and somehow have been able to maintain the element of surprise about its contents, TURN BACK NOW. For all the rest, you may encountered a bit (ha!) of controversy online about the film, particularly one moment toward the end where Kal makes a very somber decision in order to save the life of a family literally under fire. In snapping Zod’s neck to stop him from rampaging further across the ruins of Metropolis, the hero who could barely be called Superman (so much is this film a journey of discovery toward that goal that it doesn’t even bear the name) committed the ultimate, irrevocable act of violence that some felt too uncharacteristic for the hero. Superman, I hear, is supposed to be better than the average man who could make such a decision. He’s the ultimate representation of our best selves, and is, as the film even tries to drive home over and over, maybe even godlike in his stature.

Except that Kal, or Clark, isn’t a god. He is human in all the ways that matter, particularly at this point in his journey. And he has a lot to learn.

A well-cited precedent for why it is possible for Superman to kill has always been 1988’s conclusion to John Byrne’s run on the Man of Steel, a story entitled, “The Supergirl Saga.” Having been transported to an alternate world overrun by Kryptonian villains released accidentally from the Phantom Zone, Kal is left with a dangerous decision. Should he take a chance that the currently powerless killers of five billion earthlings will not regain the upper hand and find a way to destroy other worlds, or does he make the ultimate judgment on a world that has no official court system left to punish them or protect innocents? 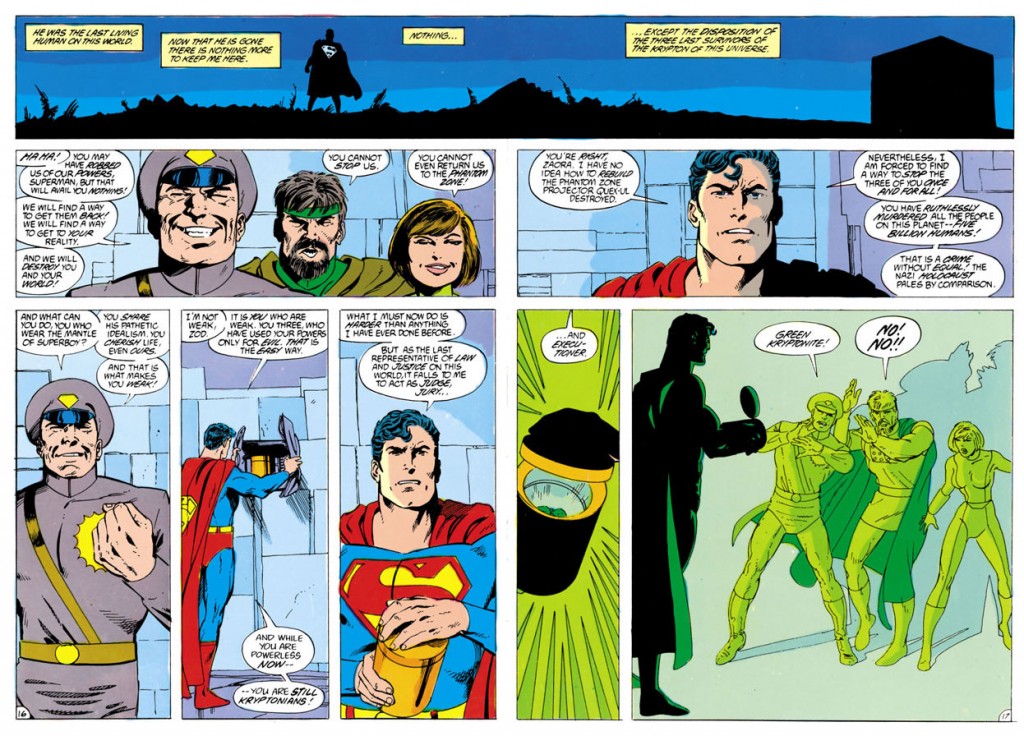 Think about it. Here we have a man, still early in his career as an enormously powerful being, who has never faced this sort of sheer destruction before. The trauma of witnessing the outcome of an act one hundred times larger than the Nazi Holocaust should make any man act out of rage or impulse. But Superman isn’t just any man. He acts out of reason and perhaps inexperience, but not out of malice or haste. And the immediate result (as also clearly depicted in the Man of Steel film) is regret — so much so that it takes Kal a period of exile into space to rationalize the decision he made, and figure out how to be a better Superman afterwards. 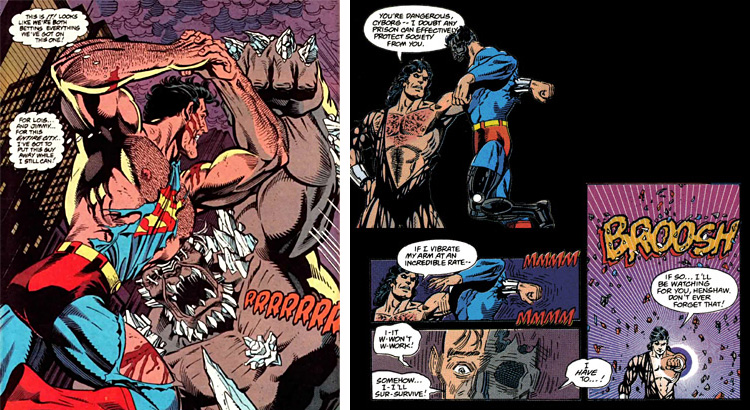 Did it mean he would never kill again? Oddly enough no, as Kal not only delivers a deliberate killing blow (albeit receive one simultaneously as well) to the monster Doomsday who is threatening every human in his path, but does so again upon his resurrection to the Cyborg Superman. In the latter case, it’s clear from the dialogue that Superman is prepared for the possibility that this is a killing blow he’s delivering, but once again, this is not an act of anger or revenge, but a decisive moment in the protection of innocents — one our own local heroes of the police have to make on, thankfully rare, occasion.

One can claim that Superman has other means at his disposal to stave off killing, that a police officer would not. But let’s not pretend these instances of dilemma are whether Superman should be able to kill a run-of-the-mill armed threat. An unstoppable Kryptonian monster, a cybernetic version of the world’s most powerful man… these are enhanced threats for an enhanced man, stakes raised more than sufficiently to warrant Kal’s actions, particularly at this point in his career.

So, we have a man who has been raised in America’s heartland by, presumably, politically conservative parents — who are still alive at this point, mind you — and been raised to prioritize the protection of others over his own well-being. Is it hubris to believe one individual has the right to take a life for the protection of others? Certainly. Is it understandable that even a Superman would take that psychological responsibility upon himself (to the detriment of his own well-being) in order to protect those in need? Absolutely. And having been raised in a state that frequently sentenced men to death row (but oddly enough hasn’t executed anyone since 1965), it shouldn’t come as a surprise that Superman holds the view of protection of the many through such means. 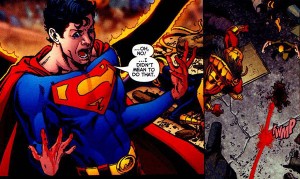 Again, this in no way implies that a Superman callously, or even accidentally, killing (as his doppelganger Superboy Prime does) is an accurate representation of the mythology in any sense. But even in Man of Steel, you do not see a man acting without regret — and presumably repercussions to come in a sequel — or without deliberation. In fact, I might argue that such an act is critical for Superman to commit in order to truly realize the value of the lives he protects and prior to any vow to never kill again. Why? Because his origin doesn’t provide a built-in prohibition against or acceptance of killing as it does for his partners in the DC Comics Trinity: Batman and Wonder Woman, respectively.

As recently as at the end of Scott Snyder’s brilliantly crafted story, Death of the Family, calls were made by fans for Batman to finally kill the Joker (Some of those fans, by the way, are ironically the same ones deriding the idea of a Superman who kills. Go figure.) for the havoc he has wrought in the Batman Family’s lives. But Batman doesn’t kill. Ever. 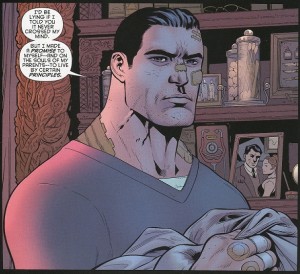 You want a prime example of a story that does not represent the root of a character adequately enough to be considered canon, have Batman kill someone. It’s not a question of whether “My Batman” can kill — Batman (Bruce Wayne, that is) doesn’t kill. The rationale is built into his very origin. Having witnessed the death of his parents at the hands of a callous, desperate killer, Bruce Wayne is psychologically unable to bridge that gap. His whole mission centers around saving EVERYONE, and that includes the guilty as much as the innocent.

Now, before you pull out the obvious claim to the contrary, let me just stop and say: shooting Darkseid during the events of Final Crisis just doesn’t count. I know! It’s a double standard! I’m a hypocrite. It’s all just bullshit.

Actually, no. Darkseid is many things, but he is not killable. As we witnessed in the beginning of the story Grant Morrison so eloquently lays out, the death of a New God always creates a rebirth, sort of a universal reset button that can’t in any way be seen as permanent a death as Batman’s prohibition against killing requires. That aside, Darkseid himself is the literal embodiment of Anti-Life. And here’s where Morrison is quite the genius. Killing Darkseid/Anti-Life is producing Life itself, the opposite of murder, and the complete fulfillment of Batman’s mission. And to do so in this last moment — the only time in his career where firing a gun was bringing life into being — is just too poetic for words.

So, if one end of the linear spectrum that is the DC Trinity is Batman, for whom killing is NEVER an acceptable option, Wonder Woman lies securely at the other end. Born and bred to be a champion by a culture that embraced Athenian values of wisdom and war, Diana does not have a prohibition against killing, and certainly doesn’t experience the regret Kal does upon the demise of Maxwell Lord. Having snapped Lord’s neck to prevent his further mind-control of a rampaging Superman in the run-up to Infinite Crisis, Wonder Woman did what needed to be done in her estimation, and at one point even argues she’d do it again if necessary. 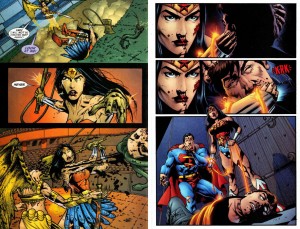 This should come as no surprise either, as one year prior to this confrontation, Diana removed the head of her opponent, the monster Medusa — to no fan outcry or dismay, mind you. What differentiated Medusa from Maxwell Lord in Diana’s estimation? Nothing. Both were monsters that needed to be taken down, and killing, however dark a turn it can become, is not outside the arsenal of a woman raised to act decisively in battle and engage with the rules of war most fully. Does she revel in the act? Certainly not. But Wonder Woman is not one to limit her own options on the matter.

It is between these two polar opposites that Superman rests in our mythology, never an absolutist in one manner or another, representing someone who has killed but could never consider it lightly. He has learned from the experience — one could say grown past it — but isn’t naïve enough about the danger of what he does to think that there’s always another way. Whether it was to save the sole remaining universe in Crisis on Infinite Earths by killing the Anti-Monitor, or protecting the life of his remaining friends from an insane Mr. Mxyzptlk in “Whatever Happened to the Man of Tomorrow?”, Kal has been willing to take that responsibility of killing another being upon himself, and face the consequences for it.

And therein lies just one aspect of Superman’s true heroism. It’s one thing to write about a figure who can do no wrong and never has to face tough decisions, but for my money, I want a hero to look up to that does face the most difficult of circumstances and takes responsibility for his or her actions. We’ve seen that time and time again with Superman, and I have no doubt that’s the crux of what we’re seeing in the new Superman film franchise as well. Whether or not this is YOUR Superman or MY Superman (And you know what, it’s totally OK if it isn’t. Not every story is written for every fan.), is certainly arguable. But there’s no question in my mind that what we’re seeing in these stories — and on the big screen this month — is every bit a Man of Steel deserving of his part in the 75 year mythology of our greatest fictional hero ever.