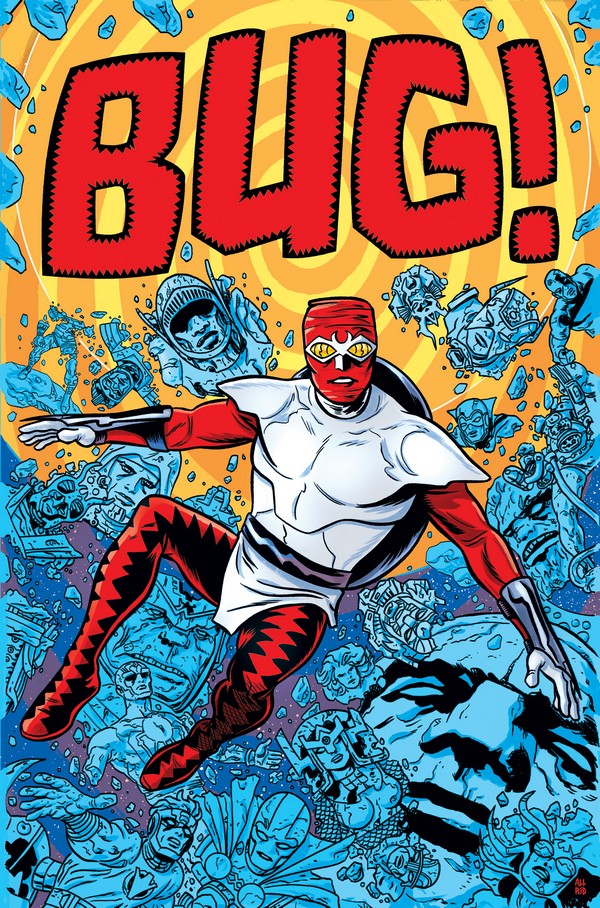 DC’s Young Animal is adding more strange and wonderful to the mix with BUG!: THE ADVENTURES OF FORAGER. The new miniseries is an original story that pays tribute to the work of Jack Kirby by featuring his characters, like his version of Sandman and sidekick Sandy, Blue Beetle, Atlas and more! What makes this comic book even more unique is that it’s a family affair—with Lee, Michael and Laura Allred writing, drawing and coloring the book. The six-issue miniseries is set to debut May 10.

“Every time I get to work with my ‘big bro’ Lee, it’s like tapping into our most thrilling childhood comic book daydreams,” says Michael Allred, artist on the project. “If you gave me the chance to list the characters I’d most like to get my hands on from Kirby’s ‘Fourth World,’ Forager the Bug sits squarely at the top. And now we are throwing him into the DC’s Young Animal mix, winding him up and letting him go! When you add in our not-so-secret weapon of Laura’s magical colors, I couldn’t possibly be more pumped about this series!”

Forager is just one of the hive until the day he breaks out of his cocoon and finds himself in a mysterious house in an unknown realm. But he’s not alone. As he comes across strange creatures—a ghostly girl, a talking teddy bear—Bug will have to figure out how he got here and how to return. He’ll soon cross paths with the evil General Electric, who is after a precious metal that might change the very fabric of life! Forager must set out on a trip across the Multiverse to stop this evil uprising, and may even establish himself as a New God in the process.

“I am absolutely thrilled to have the first family of comics, the Allreds, producing BUG!: THE ADVENTURES OF FORAGER. This year, DC is celebrating the fantastic brain of Jack Kirby and this is our offering to that wonderful tribute. In Young Animal fashion, this miniseries takes an alternative look at a character from the past, Forager, who still has a few unturned stones in his history,” explains Gerard Way, curator of the imprint. “The Allred’s brand of wild and weird fits perfectly with what we are doing, and in some ways inspired various aspects of the imprint— so it only makes sense to bring them in to do what they do best. We can’t wait to show you what they’re cooking up and hope this is the first of many family projects for the imprint that they’ll be involved in.”

“Ever since Mike and I read a battered copy of NEW GODS #9 in the waiting room before guitar lessons, we’ve loved Forager the Bug,” explains Lee Allred, writer on the project. “A kinetic action hero on one hand, an alienated, introspective youth on the other—he’s the quintessential Young Animal character. We’re taking Bug on a slam-bang, save-the-universe romp across DC’s Kirbyverse as we search for Bug’s true place in life. It’s a family team project about a family road trip. Don’t make us turn this Kirby car around!”

“What a blast to watch Mike and Lee work together. It’s like listening to little kids romping in a sandbox and hearing their imaginations burst as they play,” says Laura Allred. “I get inspired whenever the three of us slide into that perfect creative stream. They turn me loose with so much wonderful stuff that lights me up. There is a lot of joy in what we’ve done so far, and I’m so excited about everything we’ll do.”

Way continues, “The imprint takes an unexpected approach with DC’s classic heroes, while at the same time keeping them fun and completely accessible, and this comic book is no exception. We are honored to have such talented creators at the top of their game working with the imprint, and we hope this is the first of many miniseries to head your way.”

DC’s Young Animal, the pop-up imprint driven by the creative mind of Gerard Way, is alternative, unconventional storytelling with thought-provoking narrative featuring unexpected characters from the DC Universe. BUG!: THE ADVENTURES OF FORAGER joins the bizarre and thrilling DOOM PATROL, MOTHER PANIC, SHADE, THE CHANGING GIRL and CAVE CARSON HAS A CYBERNETIC EYE. These are comics for dangerous humans.