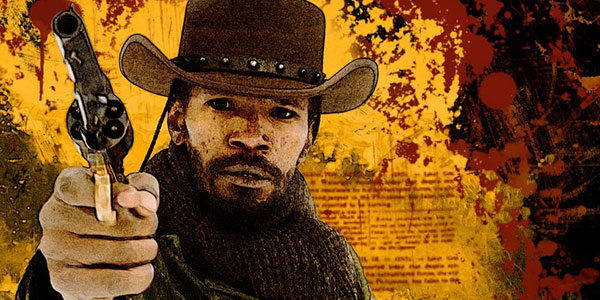 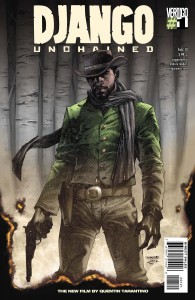 Django Unchained and the Trick of the Adaptation

It’s a rarity such as this that we get to write in our modern age of comics about a movie adaptation. There are plenty of movies which depict comic books. There are plenty of comic books that depict cinematic characters. However, these are only depictions, rather than a true-blooded adaptation of a movie. [Before you mention it, The Girl With The Dragon Tattoo doesn’t count because it was first a novel, then a movie, then another movie, and then a comic book.]

I had no intention of seeing Django Unchained in theatres. I am not a huge Tarantino fan. I also had no intention of buying the DC Comics/Vertigo comic either, except the distinctive, mostly red cover drew me in. I opened it up and found that the art was by none other than R.M. Guerra — yes, that awesome artist of Scalped, who we watched grow many characters on the Prairie Rose Indian Reservation. I hadn’t seen anything from him since Scalped ended its run, so I was in.

Quentin Tarantino does a short intro to the book, which explains that the comic will include a lot of the stuff from the movie that got cut. And if you run to the theatre the same night as reading this first issue, you’ll see this at work. It’s a loss to the movie though, as the cut scenes actually add quite a bit to the drama and texture of the comic. 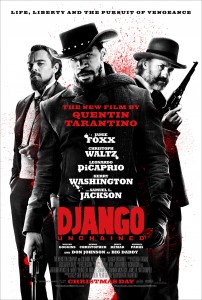 We know that Tarantino is going to try and comment about something cinematic in his work. In Django, he set out to create his Western done in the style of a Blaxploitation movie. This is fine and expected. The trouble with the movie though is at times it comes off like it’s trying too hard to be a Tarantino movie or too hard to be the Blaxploitation film he set out to create. I realize sometimes audiences are thick, and they need to be beat over the head with the idea you’re presenting. This is why they make movies like Ted or Texas Chainsaw Massacre. The kind of audience who goes to see Django doesn’t require the handholding that was blatant in its last ten minutes and peppered throughout the rest of the film. We get it, and the fact that we got it an hour ago and you’re still spoon feeding it to us almost ruins the film. Almost. The movie is saved by stellar performances and colorful dialogue.

The thing is, though, I’m able to write this review because of the comic. I wouldn’t have gone to the film had I not picked up and thoroughly enjoyed the adaptation. Now that I’ve ingested both, I am able to say that I think the comic was better than the movie. In fact, even though I know the ending of Django Unchained, I am still going be reading the comic adaptation all the way to the end.

The comic is unique from the movie. Having the gritty dark style of R.M. Guerra provides an extra layer of drama that only made cameo appearances in the film. The comic is less an adaptation of a Tarantino film and more of a well written dark Western — the kind we’ve been craving for awhile. Sure, the comic still maintains the quirky and tongue-in-cheek dialogue of Tarantino, but it does so with pointed accuracy. It cuts to the reader in a way that the movie just carries on past. In the comic, each panel becomes this beautiful mixed genre offspring of cinematic and sequential art.

You can find Gord Cummings on Twitter at @gordwcummings or via email at gordwcummings@gmail.com.