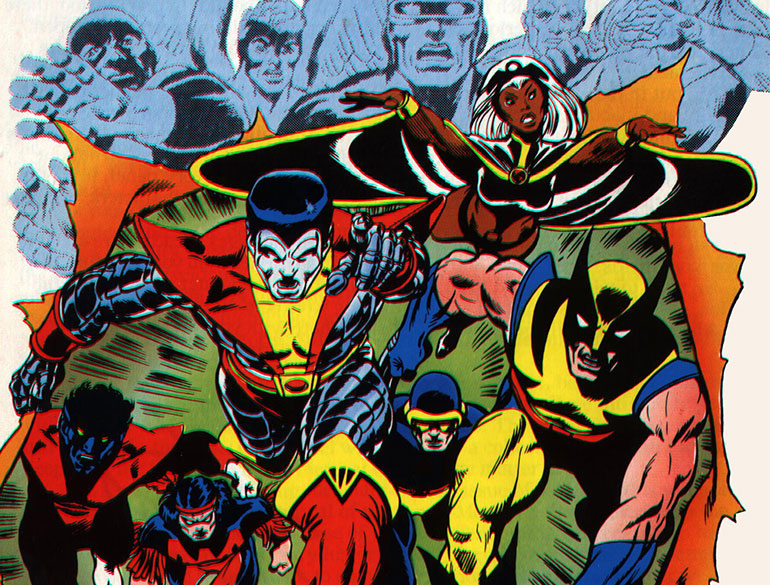 With hundreds (maybe thousands!) of mutants on hand to choose from, we have three days of creative combos to tickle your fangirl and boy imaginations! 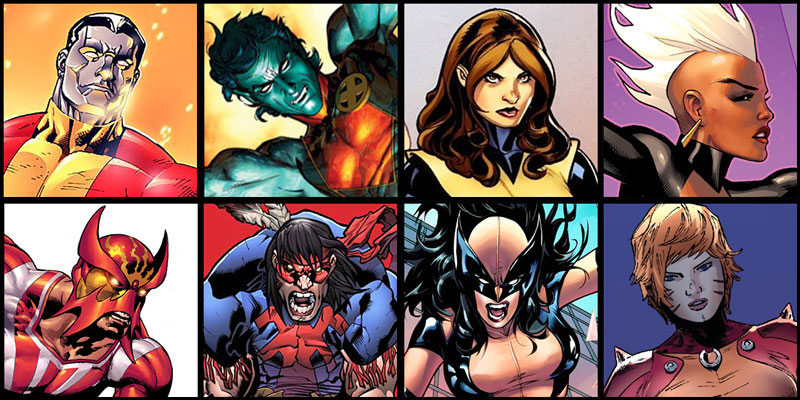 Marvel’s exploration of legacy and infusion of youth has left fans feeling nostalgic for “their” characters, or the more popular versions of other chracters. Couple that with the lack of attention given the X-Men, especially as Marvel has elevated the Inhumans to grab so much of the merry mutants’ spotlight, and now is the exact right time to bring back some fan favorites and rejuvenate the X-brand. Most importantly, the X-Men need to remind people to respect and celebrate their differences while having some fun along the way.

Unless otherwise noted, the constituents of this X-Men roster are plucked from before the Mutant Massacre, when it was still possible to arrive at the mansion on Graymalkin Lane and see a softball game or a picnic, hear a joke, and forget about the fact that the residents of the mansion were anything but people.

The best way to anchor a team is with an anchor. The metallic-skinned strongman returns with a zest for life, a willingness to serve, and one helluva punch.

Kurt joins his long-time teammate to provide the heart and soul of this roster. He’s not a leader, he’s a doer, and he’s here to do whatever it takes for the X-Men to return to greatness.

There’s going to be some tech that needs minding, and occasionally her teammates will need to receive a swift kick in the pants (literally or verbally). Kitty Pryde is just the gal to do that and inspire the tam to strive to be better despite any and all odds against them.

She’s certainly proved herself as one of the greatest X-Men ever. She’s led the team both with and without her powers. This time, however, she’s not leading, she’s joining. Sporting a Mohawk and rocking the badass outfit she wore as the leader of the Morlocks, Storm changes the climate of every room she enters.

Bringing the heat and ready to prove his worth as an X-Man, Sunfire checks into the roster from the early days of the Avengers Unity roster. He’s ready to make a difference it he world, and the X-Men are ready to finally see what he can do by their side.

Not Jimmy setting aside the Warpath moniker to take up his brother’s mantle. No sir. This is John Proudstar, plucked from the timeline just before his unfortunate demise. No longer trying to grow out of anyone’s shadow, John is confident in his abilities and his position with the X-Men. Still silent and strong, but a leader by example, Thunderbird is ready to bring the hurt and makes an impressive double-team with Colossus when it comes to pure fisticuffs. Oh, and he makes a mean big family breakfast to get his team rolling every morning.

This is another one of the deviations from the collective timeline. And the reason this team is together. Laura Kinney needed the X-Men, but not just any X-Men – these X-Men.

Let’s do this. Pull Rachel from the timestream at the height of her power and confidence. Let’s make Rachel Grey everything she can be and more. The telepathic lead for the this X-Men team, Rachel keeps the team connected in battle, not unlike the Martian Manhunter under Grant Morrison’s pen. And, yes, she is leading the X-Men.

Brimming with braggadocio, Mojo has come to Earth and has declared himself the most powerful ruler in the world, and he’s doing it all in a media circus, transmitting his blather to any and all screens. Wait. What? That’s not Mojo?! Well, that simply doesn’t matter, because these are the X-Men! 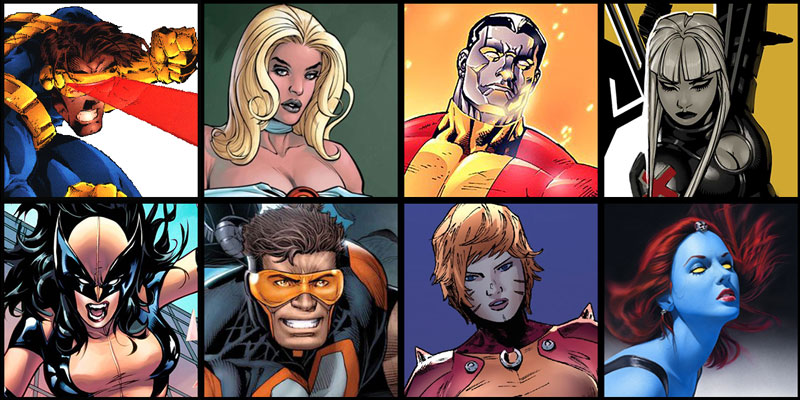 Cyclops was right. He saved the mutant race from extinction and he was thanked by being branded as a villain and treated as such by his oldest friends. I was always disappointed that after everything went down in AvX, so few X-Men flocked to his side.

So let’s rewind a moment to when Scott was still living and surrounded by some quality mutants who gave him the respect he deserved.

This isn’t revolutionary Cyclops or war general Cyclops. No longer fighting off extinction, Cyclops is back in his nineties mindset. Just a great leader, focused, always ready with a brilliant strategy. He’s still a stick in the mud but his heart has grown back.

The reason Emma loves Cyclops is because he makes the hard decisions. She didn’t leave his side after AvX and even after his death, she’s still fighting on his behalf now in Inhumans VS X-Men. She understands him in a way Jean never did and instead of judging his choices, she bears the weight of the consequences with him. The past few years were rough on mutantkind and it took a strain on their relationship so I’ve always wanted to see how they would act together at a time when things for mutants weren’t so dire.

Colossus may have the kind heart of an artist but he has the mind of a soldier. He stuck by Cyclops when the going gets tough and made some real sacrifices of his own, sacrificing his own soul to power up and become Juggernaut. He has a very professional relationship with Scott, not always agreeing with him but following him nonetheless.

Illyana Rasputin cares about two things: her brother and mutantkind. She didn’t hesitate when the time came for Cyclops to call for revolution and Cyclops has been relying on her skills for quite some time. When Utopia was under attack during Second Coming, Cyclops risked an entire team of heavy hitters to rescue Illyana from Limbo. They would never admit it because they’re both closed off introverts but the respect they’ve developed for eachother is very real.

X-23 is more than ready to step up to a main X-Men team as Wolverine. X-23 and Cyclops have a very interesting relationship. He basically used her as weapon, sending her to eliminate mutant threats as a member of X-Force. It didn’t sit well with Logan and now that she’s grown so much, X-23 probably doesn’t look back at those times fondly. Nonetheless, she showed a real trust in Cyclops judgement back then and a Wolverine’s trust is not an easy thing to gain.

Every X-Team needs a detractor, someone who disagrees with the leader on everything and I can’t stomach having Adult Beast on an X-Men team these days so let’s go with his younger, not so obnoxious counterpart. He’s the team genius as well as it’s moral compass. He realizes why his future self hated today’s Cyclops but he’s shown that he’s willing to give his old friend a chance to tell his side of the story.

The best X-Men books are rich with soap opera drama and when it comes to drama, the Summers family tree is chock full of it. Despite being around for decades, Rachel hasn’t had much quality panel time with her father. She was one of the first in Wolverine’s camp to switch sides during AvX so she clearly has a respect for him. And yes, she still loathes Emma.

What’s an X-Men team with a reformed villain who will stab them all in the back by issue 15? The X-Men love giving villains second and third and fourth chances, especially Mystique. She plays the role of traitor so well but is it time for her to finally go against type and be loyal? She never had a deep hatred for Cyclops and he’s allowed her into the X-Men once before. Of course, she later betrayed them at their most desperate hour and Cyclops sent Wolverine to kill her so he’ll be watching her more closely this time. 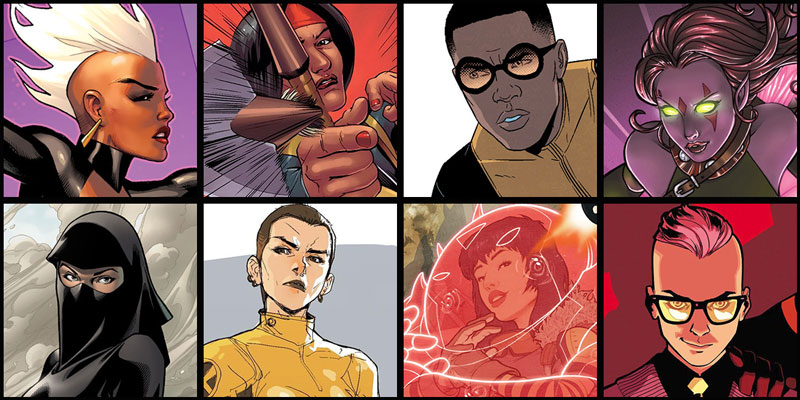 A New Generation! The X-Men as we know them is GONE. A brand new team needs to be formed for the 21st century that honors the multi-cultural, multi-ethnic tradition of the All-New All-Different X-Men.

Now in her sixties (somehow. Don’t ask too many questions about Marvel Comics aging.) and still boasting a mohawk, the mutant formerly known as Storm is the last surviving member of the X-Men as anyone has known them. It’s left to her to reconstruct the strike force team and rescue a brand new group of mutants worldwide who face oppression in a new alt-right, anti-mutant wave of hate.

Long in hiding after the near total annihilation of the original teams of X-Men, Dani Moonstar is finally located by Professor O in the wake of her tribe’s last stand against the US government that left only her free. Long remembered as Ororo’s best student, Mirage is called upon to lead the next team of X-Men in making sure communities of mutants and humans can have safe homes, healthy lives, and prosper.

Officially the smartest person alive — mutant or human — Prodigy does have some big shoes to fill to finish the work of the late Henry McCoy, Reed Richards, and Lunella Lafayette. Prodigy is, in fact, Mirage’s first recruit, having seen so much potential in him as a teenager once upon a time. They fulfill in each other what is missing in becoming the true heirs to Professor X’s power and influence.

Blink has made it her mission to rescue mutant children with her teleporting powers from all over the multiverse, particularly since everything went so wrong. Her recruitment is a natural for a team that wants to locate and save anyone who’s left to rebuild Xavier’s school and keep the mutant race alive.

Like Blink, crucial for any mission where infiltration is necessary, particularly in terms of espionage and information gathering, Dust is a natural for the strike team Professor O wants at the forefront of her new plan.

Teenage no longer, the girl once known as Negasonic Warhead is now considered America’s last deterrent against Russian nuclear dominance, although her ties to the US Government have since unraveled. Joining the X-Men is going to upset a lot of military men in Washington and put a bullseye on everything Professor O wants to accomplish. She just doesn’t know it yet.

It’s no accident that more than a few of Professor O’s recruits mimic her old teammates’ powers and abilities so deftly. Armor stands in for the powerhouse Colossus used to represent for the X-Men before his death, as Blink does for Nightcrawler. Hisako is all grown up, however, and no longer has anything to prove. She is the quintessential brawler and thinker in the field.

Quire has spent years at the forefront of the alt-mutant movement, with questionable ties to the very organizations and nations the X-Men were designed to fight against. He’s racist. He’s sexist. He’s somehow simultaneously anti-human and wants to undermine mutantkind. So why is it so important to Professor O that he be here? And what is that red flicker in his eye?