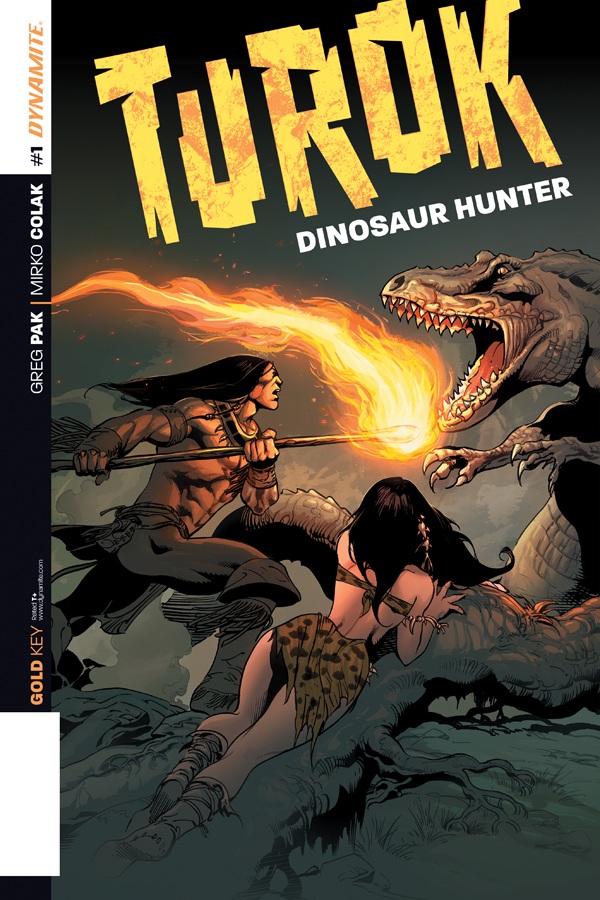 “I’m so grateful to the retailers who are supporting the book so enthusiastically,” says writer Greg Pak. “And much love to our artist Mirko Colak, our colorist Lauren Affe, and our letter Marshall Dillon, who are going above and beyond making the book look like nothing else on the shelves. And of course a huge tip of the hat to editor Nate Cosby and all the crazy kids at Dynamite who are hustling so hard to make this entire Gold Key line something special.”

“What a great way to begin the Gold Key Universe,” adds series Editor Nate Cosby. “Greg, Mirko, Lauren, Marshall and all of the amazing cover artists got us off to an incredible start, and the amount of people responding to the story has been such a joy to see. Here’s hoping just as many people pick up MAGNUS in March, SOLAR in April, and SPEKTOR in May!”

“Greg Pak is a masterful world-builder and this series is a prime example of how it’s done,” says Dynamite Senior Editor Joseph Rybandt. “It’s especially nice to be rewarded at the retail level for all the hard work and more thanks are owed to the entire creative team and Nate Cosby whose running the day-today ops of the Gold Key launch!”

Written by Greg Pak (Batman/Superman) and drawn by Mirko Colak, Dynamite is putting out a book that is unlike anything else on the comic rack! Thanks for all of your support for our launch of the Gold Key Universe!

Check out the tremendous reviews Dynamite has received for Turok #1!

TUROK: THE DINOSAUR HUNTER #1 (Newsarama) – “Each iteration of Turok: Dinosaur Hunter sees the creative team putting their own take on what’s basically a man-versus-nature story. Writer Greg Pak takes some of the best lessons from Planet Hulk and creates a Turok that is among his people, but still very much an outsider. It’s refreshing to read the character still so new to the world he will soon inherit. However, the real star of this comic is artist Mirko Colak. His line work sets a fantastic tone for the book and drafts a world that feels very much alive, both in beauty and brutality. His inks balance perfectly with smart coloring choices by Laureen Affe. While Pak’s dialog reads a little choppy at times, the twist and art more than raises Turok: Dinosaur Hunter #1 to a must-read.”

TUROK: THE DINOSAUR HUNTER #1 (Comic Book Resources) – “As Turok: Dinosaur Hunter #1 closes, the setting comes into clearer focus, giving readers a sense for the where and the when, but the what remains a mystery and has promised to pack an adventure-filled picnic basket for lunch.”

TUROK: THE DINOSAUR HUNTER #1 (Newsarama) – “We love the classics and are always a bit hesitant when those classics are revamped and repackaged with a shiny new cover and presented to us all over again. As someone who’s only exposure to this character is by controlling him in a 64-bit video game, this comic serves as a great introduction to Turok’s personality and the world that he inhabits. Gone is the running and gunning tough guy that I played in the video game and in his place is a sensitive, relatable outcast in a dangerous world – he is every bit of a classic hero. Pak uses simple storytelling techniques to tell a compelling story, and coupled with the slick art of Colak and Affe, we are presented with a great introduction to Turok and this line of classic books.”

TUROK: THE DINOSAUR HUNTER #1 (IGN Comics) – “Pak keeps the dinos at bay so we can spend some time getting to know Turok, which really pays off. There’s a ton of heart in this first issue as we see the pain and burden that the character carries. His world feels real, even though it’s one completely foreign to us. It’s not immediately clear why this otherwise straight forward tale has dinosaurs in it, but if your hook is “There are dinosaurs here!” then you can sign me up. This is just a great comic book. It’s well written, fully realized and, oh yeah, it has dinosaurs in it. Dinosaurs with feathers.”

TUROK: THE DINOSAUR HUNTER #1 (Comics Spectrum) – “Dynamite action & explosive storytelling get the Gold Key relaunch off to a great start. Pak’s story and Colak’s art blended perfectly to draw me into Turok’s world. The last two pages of the issue were the icing on the cake adding in an additional story element that I’m going to love seeing played out over the course of the series. We have something here that is respectful of its roots but completely fresh. I’m on board for this series and am looking forward to seeing the other titles in Dynamite’s Gold Key relaunch; Pak and Colak have set the bar pretty high for the other titles debuting soon.”

TUROK: THE DINOSAUR HUNTER #1 (Unleash the Fanboy) – “Pak added some action to the issue as well, but it was the build-up of character along with the symbolism that I enjoyed the most. Mirko Colak did an astonishing job of the artwork. The detail and layouts were particularly impressive, as despite having a lot of scenery it was still very smooth and realistic. Turok opens the Golden Key Universe nicely and if the remaining three series are like this I will be a very happy fanboy. Highly recommended.”

TUROK: THE DINOSAUR HUNTER #1 (Bagged and Bored) – “Colak’s art is beautiful, and he captures the natural setting with beautiful tones by Lauren Affe. I have high hopes for this series. With Pak at the helm we can expect that the story will be entertaining and high energy. Even if there end up being no bionic dinosaurs I’m sure that Dynamite will continue their successful rebooting of comic characters.” 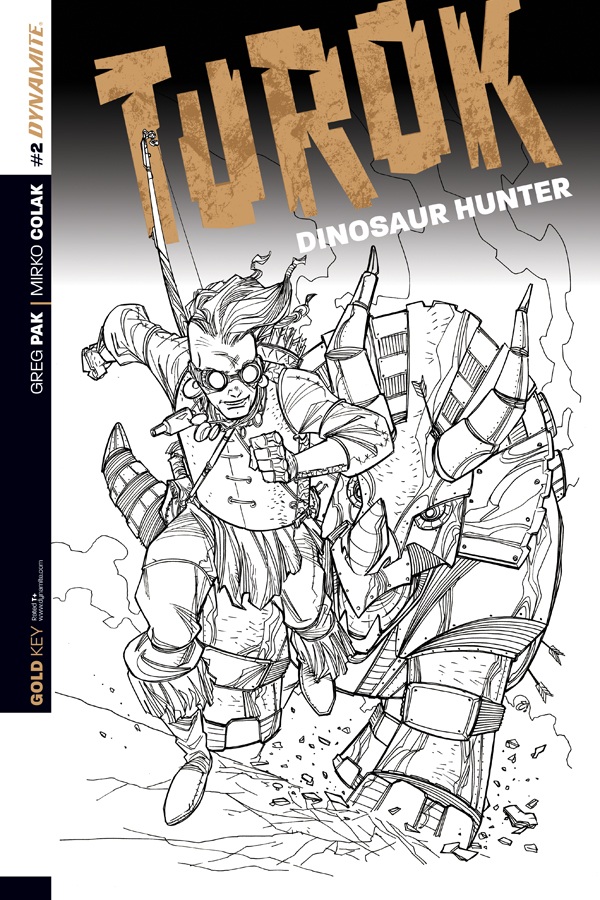 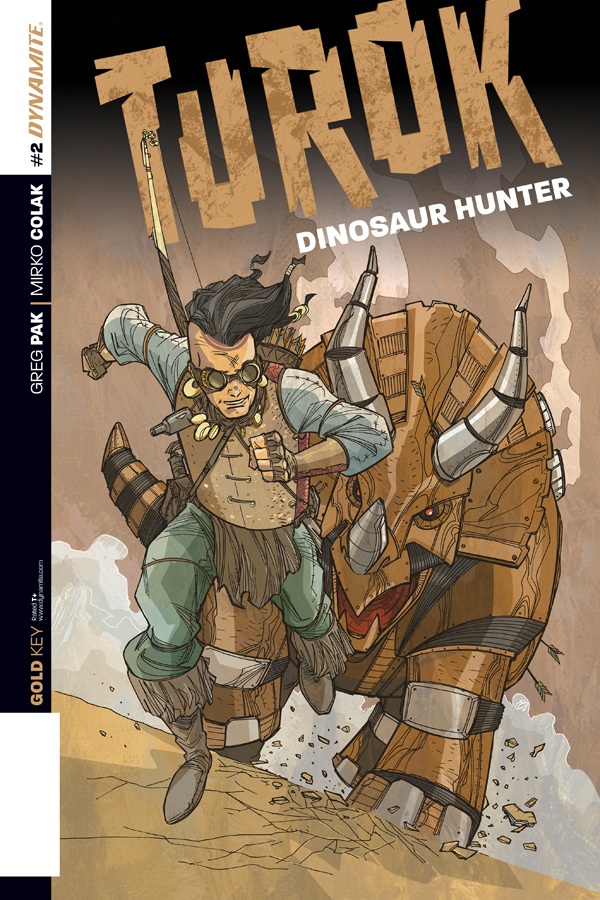