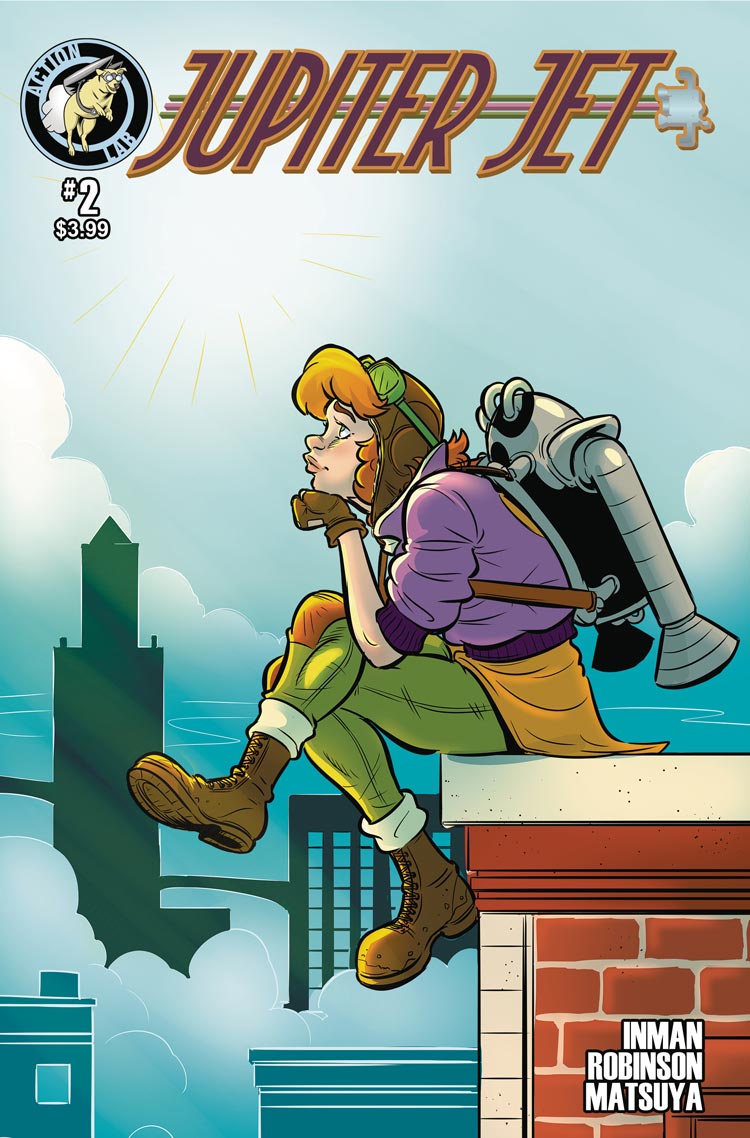 The further breath-taking exploits of that amazing character – Jupiter Jet! If you missed the first issue then you will soon discover that Jupiter Jet is faithful throwback to the “funny books” of yesteryear. Action, adventure, danger, and intrigue are all found within the pages of issue #2. It’s everything that a second issue should be.

Jupiter Jet #2 is the enthusiastic smile on the face of a young child opening a birthday present. It’s innocent, fun, and full of energy. The story takes off quickly and keeps the reader running along right until the exciting cliffhanger end. Robinson and Inman’s writing keeps the storyline as simple and adventurous as it’s heroes.

It’s appropriate for the heroine, Jaky, as she is simply trying to be a force for good in her world. While she is also trying to save her own family from financial problems she doesn’t hesitate to give up what she’s gained in order to help others first. It’s easy to see the large heart she has in her actions. Her dialogue, as well as many of the other characters, is a blast to read as she articulates in alliterates. The style of writing used helps the reader imagine a bombastic 1930s soundtrack in the background as she leaps into action.

In similar fashion the oversize sound effects helps place the readers inside an animated cartoon. This issue successfully amps up the excitement from the first issue as well as giving some more back history to Jaky. We also get to spend more time with the nefarious villain of the series who is delightfully evil and a nice counterbalance to the goodness of Jaky.

Issue #2 is definitely a step in the right direction and quickly moves the story along. As with the first issue there is a back story that continues the origin of Jaky’s backpack. It is a short piece that may remind the reader of comic book versions of non-fictional characters from the past. The story makes good use of only a few panels but seems like it could also be it’s own book if expounded upon.

The artwork is such a perfect match for this retro hero and feels like you could find it on the newstands of the 30s or 40s. Ben Matsuya is a natural for this style and makes it even better by giving the characters plenty of visible emotions in their reactions. His style of rendering faces is reminiscent of caricature drawings found in the county fair, a delightful appropriate match for the tone of the book.

Matsuya is including lots of little things in the background that either the characters or others (like Jaky’s cat) are reacting to while something else is going on in the foreground. It’s a nice touch that is fun to look for throughout the story.

Above all the artwork really captures the youthfulness of the story. Jaky and her brother look like kids and not just shrunken down muscle bound adults. Adventure is injected delightfully in the action scenes of Jaky flying through the sky with her jet pack roaring at her back.

Adventure is also conveyed in the color choices by Mara Jayne Carpenter. The issue is saturated in lots of bold redish-oranges and bright light blues. Orange fills the pages with joy and enthusiasm while sky blues tie into a theme of “the sky’s the limit.” The colors really drive home the fun-filled adventure tone of the book.

Taylor Esposito continues to deliver lettering that is on-point. He does an excellent job of switching up the style slightly to emphasize when a character is delivering excited speech. It is just another important piece of the entire picture that makes Jupiter Jet the success that it is.

If you missed issue #1 then now is the perfect time to go back and read it first before jumping on with issue #2. It is such a fun reminder of what comic books started out as: wholesome fun that kids and adults alike can enjoy. Jupiter Jet is sure to be America’s greatest adventure strip!