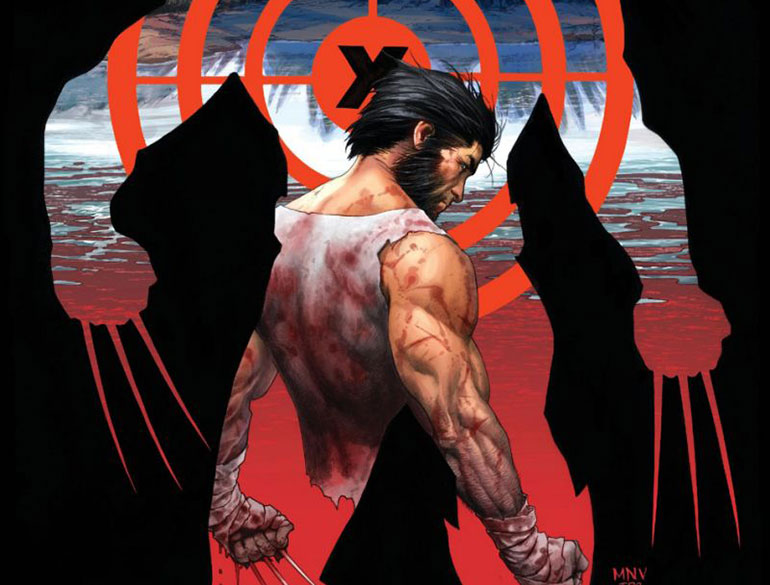 Super-heroes are meant to die.

Stay with me here: all hero stories should end with a coffin. It’s the only logical ending.

Every single super-hero put on their cape, cowl, or spandex because they were no longer able to accept their world for what it was. They couldn’t turn away from the malice, injustice, chaos, or whatever ominous synonym for “badness,” that seeped into the cracks of their society or personal life.

And tragically, they’ll never conquer that badness. The super-hero is never going to fully vanquish their arch-nemesis once and for all. The hero’s mission will never be finished because that which they chose to fight will always remain. Badness, sadly, is a facet of human nature. The only true ending to this futile struggle is a funeral.

Very doom and gloom, right? Not when you realize the beauty in that futility. 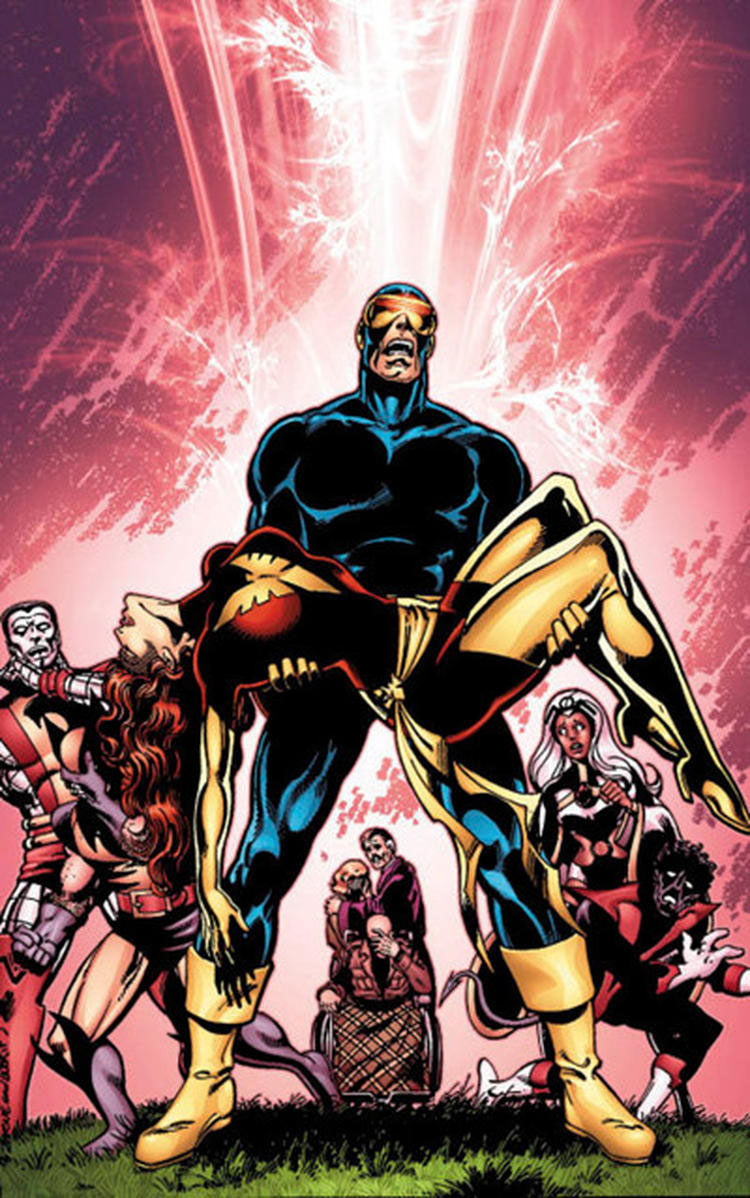 Super-heroes are heroes not because of their abilities, or their willingness to forsake their own life and limb, or the fact that they protect their worlds from super-villains.

They’re heroes because they represent the better angels of our nature. They preach — symbolically or literally — that we don’t have to give in to the demons dormant within our psyches, and that we can find strength in rejecting them. They teach us how to rise above by first being lowered into the dirt.

Wolverine taught me that lesson. 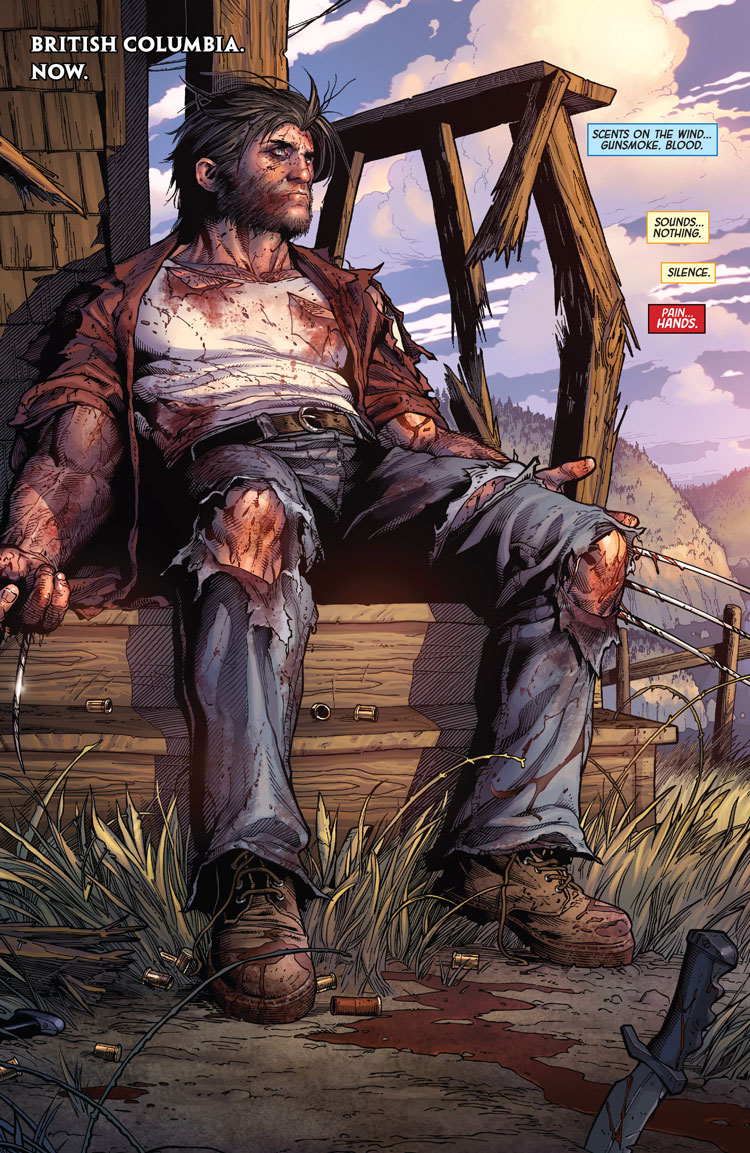 Wolverine has the most complete arc in all of superhero comics. Debuting in 1975, the man we eventually came to know as Logan was nothing more than a wandering savage looking for purpose and to atone for his sins. After a tussle with The Hulk, Professor X approached Wolverine to join the X-Men and Wolvie said, “Why not?”

From there, he found a home within the X-Mansion, dignity as an X-Man, love in the eyes of Jean Grey, and finally, atonement by founding his own school for wayward mutants to ensure that they would never suffer the same mistakes that he did. His story is a complete circle — a journey made whole, as the wandering savage found peace in helping others.

And at the end of that circle was death. 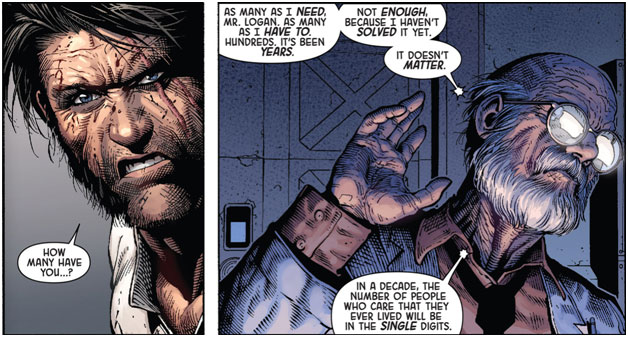 In the subtly titled mini-series “Death of Wolverine,” Logan meets his end after he loses his healing factor and ends up encased in a tomb of adamantium en route to finally finding the scientist who laced his bones with the mysterious alloy in the first place. The series felt mundane to me until the last four pages. This scientist, realizing he is about to be all sorts of stabbed, asks a murderous Wolverine — who has a coating of smoldering adamantium hardening on his person — what made him a hero? What had he ever accomplished?

“Enough,” meaning that Wolverine finally realized all the pain he suffered, blood that he spilled, and death he brought was worth something.

“Enough,” meaning that the sum of deeds helped make the world around him better.

“Enough,” meaning he had lived his purpose and his journey was at its end.

And “Enough,” meaning that he finally atoned for the man he was and was at peace with the man he became. 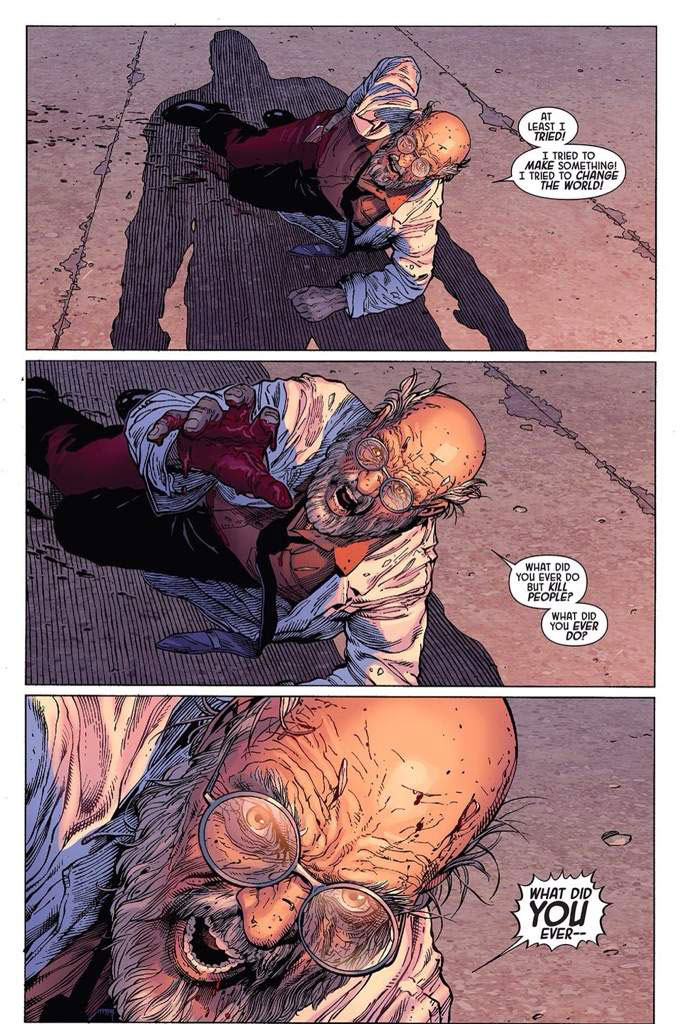 It’s a perfect death. We were given the opportunity to go on one final adventure with a character we love. The character is given literal and existential threats along the way, suggesting that the audience ponder the meaning of his life. And ultimately, the character and the audience are meant to find closure and meaning from the character’s journey, just as the grim reaper comes for his due.

But Wolverine is a comic book character.

And just like every major comic book character since 1992 (thanks in some part to the wild critical and financial success of “The Death of Superman”), he died and is now being resurrected via plot-chicanery. And so this begets the age-old question: What is the point of death in super-hero comics?

That’s simple. Death in super-hero books is no longer an ending. It’s a plot device. It’s just another story. 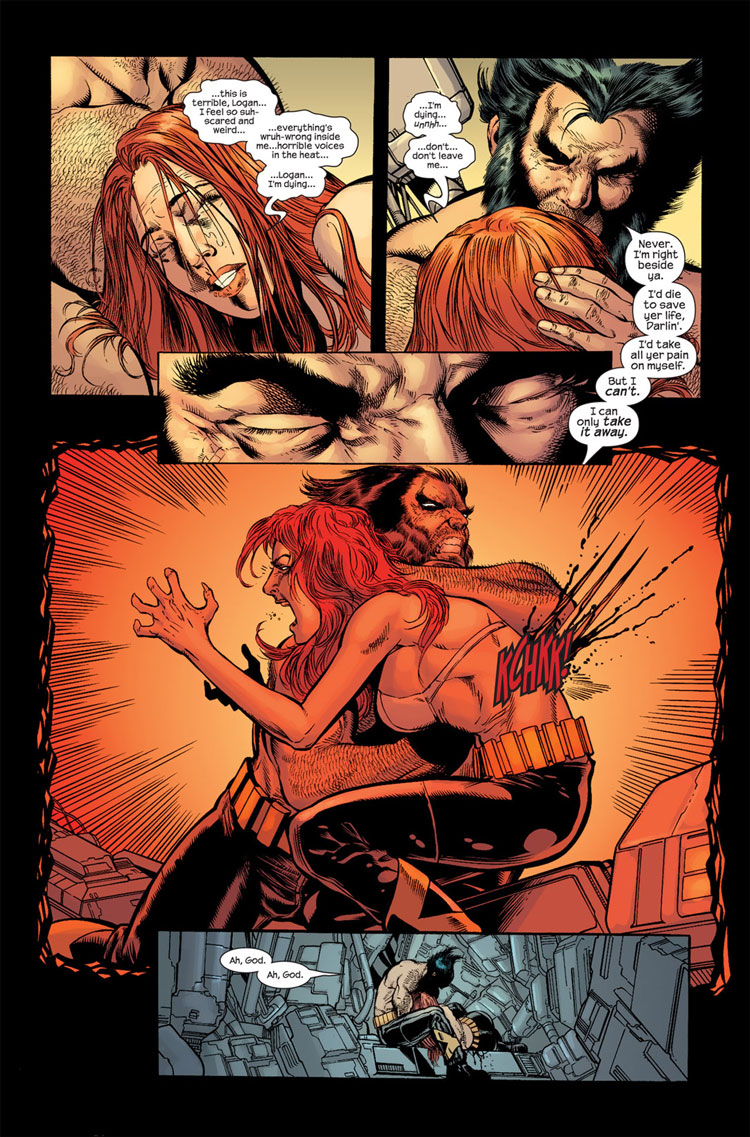 A super-hero’s battle will never end. Batman will never rid Gotham of random violence and chaos. The Flash will never be fast enough to stop all the tragedies in Central City from happening. Daredevil will never bring justice to Hell’s Kitchen.

But they’re not meant to. Their battles and stories are meant to be anecdotes and parables that inspire us to make ourselves and our world better.

That message though invariably gets muddled amidst all the plot contrivances, retcons, and reboots of any given hero’s character history. We as an audience often spend more time trying to keep all the details in check. We care more about what the Speed Force can do or what color Kryptonite is getting tossed around. And we stop paying attention to what the super-hero’s story is trying to say.

This is why we need the reaper. 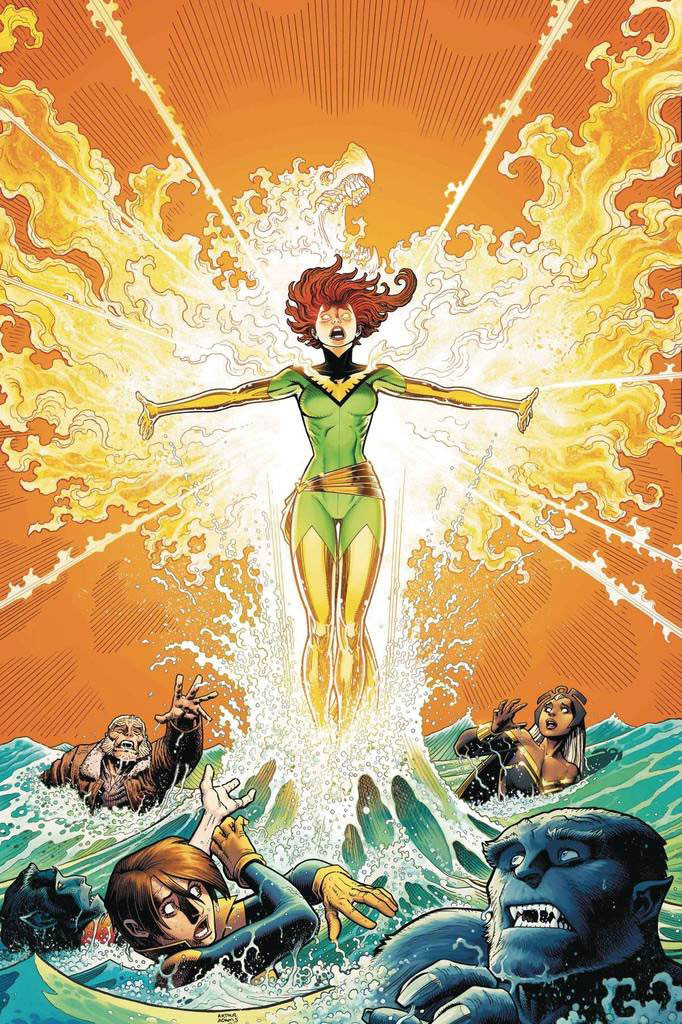 The reaper can tear away all the plot contrivances around a super-hero’s story to distill the very essence of that character’s message. When the Flash famously ran himself to death to stop the Anti-Monitor in Crisis on Infinite Earths, did you care about the specifics of how it happened? Were you concerned about every detail of Doomsday’s origin did as you watched Superman have his ill-fated boxing match with him to protect Metropolis? Did it bother you that Wolverine had bone claws under his adamantium skeleton as the cocoon was hardening around him?

No, you felt that Barry would knowingly die to help as many people as he could. You remembered that Clark is a farm-boy, who taught you to stand up to monsters. And that Logan was just a man who didn’t want people to suffer the way he did.

Super-hero deaths are often telegraphed and advertised to readers for the sake of marketing. No matter how final it appears or how long it takes, they will always be reversed. They may be clichéd, melodramatic, and whatever that guy from your comic-shop said — but: when they’re used effectively, they can definitively epitomize and enshrine a hero’s message.

There is no better way to celebrate the life of a super-hero, than by watching their death. 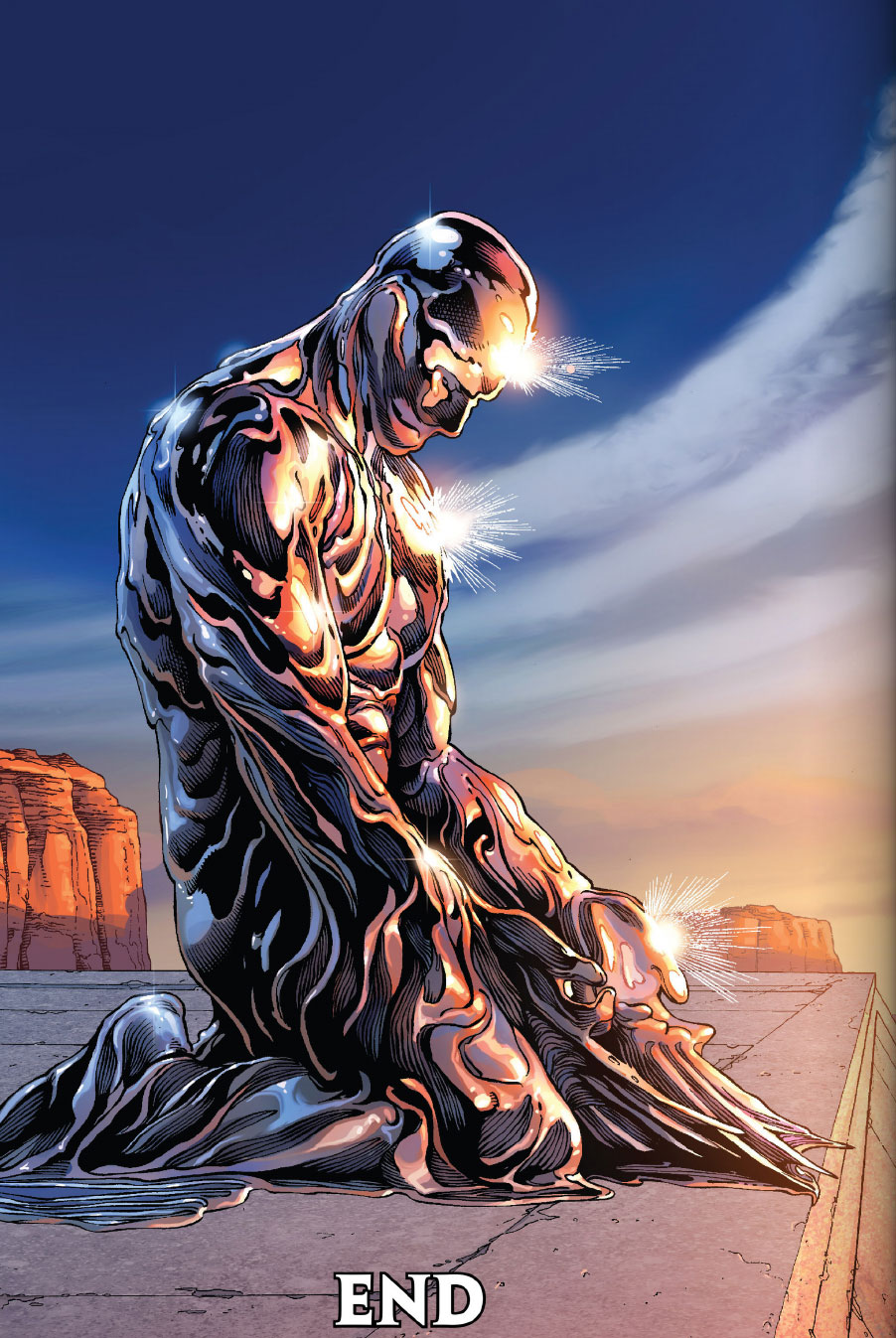