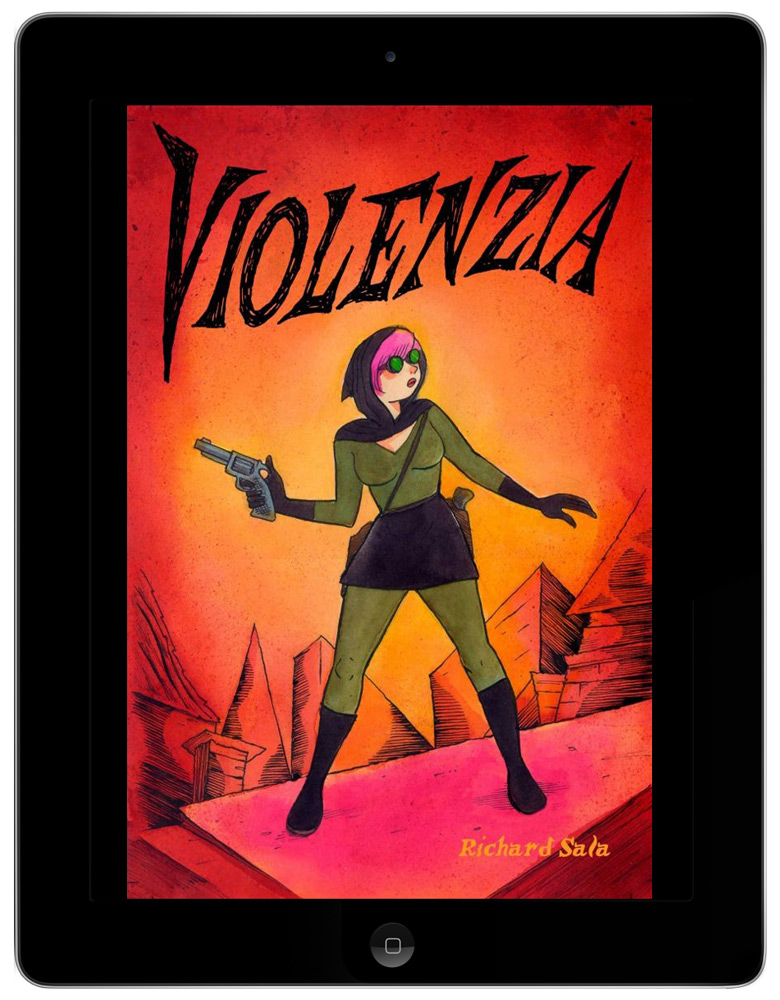 Fantagraphics and comiXology have announced a partnership to distribute the publisher’s first digital exclusive comic, Violenzia by Richard Sala. 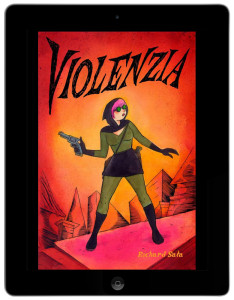 “Let there be no mercy or forgiveness for they have shown none.” With these words, whispered into the wind, a mysterious young woman leaps into action with wild abandon, twin automatics blazing. Is she a brave and reckless heroine taking on a monstrous evil? Or is she a deranged angel of death? One thing is clear, whether she is dropping from a high window into a crowd of red-robed fanatical cultists, or facing down a horde of psychotic hillbillies, you don’t want to get in Violenzia’s way.

“This is a new model for us,” said Fantagraphics Associate Publisher Eric Reynolds. “Not a better model, but a different model. Richard Sala is one of our most beloved authors, and recently he has built up a considerable and new following online, via his Tumblr and other social media, so when he proposed Violenzia it seemed like the perfect opportunity to experiment with a digital-only release.”

“We’re thrilled that Fantagraphics partnered with us to bring Richard Sala’s beautiful and hilarious Violenzia to comiXology and our worldwide audience,” said comiXology co-founder and CEO David Steinberger. “Readers and fans will also be treated to experiencing this amazing work in comiXology’s cinematic Guided View reading technology.”

A fast moving, self-contained story, Violenzia is a blast of pulpy fun, told in scenes of audacious action and splashes of rich watercolors.  With elements of golden age comics and old movies mixed with Sala’s trademark humor and sense of the absurd, Violenzia is serious fun, a bloody enigma masked as eye candy, a puzzle box riddled with bullet holes.

Violenzia is the latest story by Sala featuring heroines (or anti-heroines) who are quirky, mysterious and unpredictable — such as Peculia (PECULIA , PECULIA AND THE GROON GROVE VAMPIRES), Judy Drood (MAD NIGHT, THE GRAVE ROBBER’S DAUGHTER) and K Westree (CAT BURGLAR BLACK) and features the same distinctive mixture of mystery, violence and humor as his books THE CHUCKLING WHATSIT, THE HIDDEN and DELPHINE.

Look for Violenzia out today on comiXology.

About Fantagraphics
Fantagraphics Books has been a leading proponent of comics as a legitimate form of art and literature since it began publishing the critical trade magazine The Comics Journal in 1976. By the early 1980s, Fantagraphics was at the forefront of the burgeoning movement to establish comics as a medium as eloquent and expressive as the more established popular arts of film, literature, poetry, et al. Fantagraphics quickly established a reputation as an advocacy publisher that specialized in seeking out and publishing the kind of innovative work that traditional comics corporations who dealt almost exclusively in super-heroes and fantasy either didn’t know existed or wouldn’t touch: serious, dramatic, historical, journalistic, political, and satirical work by a new generation of alternative cartoonists (including now-legends like Peter Bagge, Daniel Clowes, Gilbert and Jaime Hernandez, Joe Sacco and Jim Woodring) as well as many artists who gained prominence as part of the seminal underground comix movement of the ’60s, such as R. Crumb and Kim Deitch. Fantagraphics has since gained an international reputation for its literate and audacious editorial standards in publishing the best cartooning from all eras and regions with exacting production values.

About comiXology
ComiXology has revolutionized the comic book and graphic novel industry by delivering a cloud-based digital comics platform that makes discovering, buying, and reading comics more fun than ever before. ComiXology’s Guided View™ reading technology transforms the comic book medium into an immersive and cinematic experience, helping comiXology become one of iTunes top 10 grossing iPad apps in both 2011 and 2012. Offering the broadest library of comic book content from the top 75 publishers, and including independent creators as well, comiXology will not stop until everyone on the face of the planet has become a comic book fan.  A privately held company, comiXology is based in New York City.  For more information visit www.comixology.com.