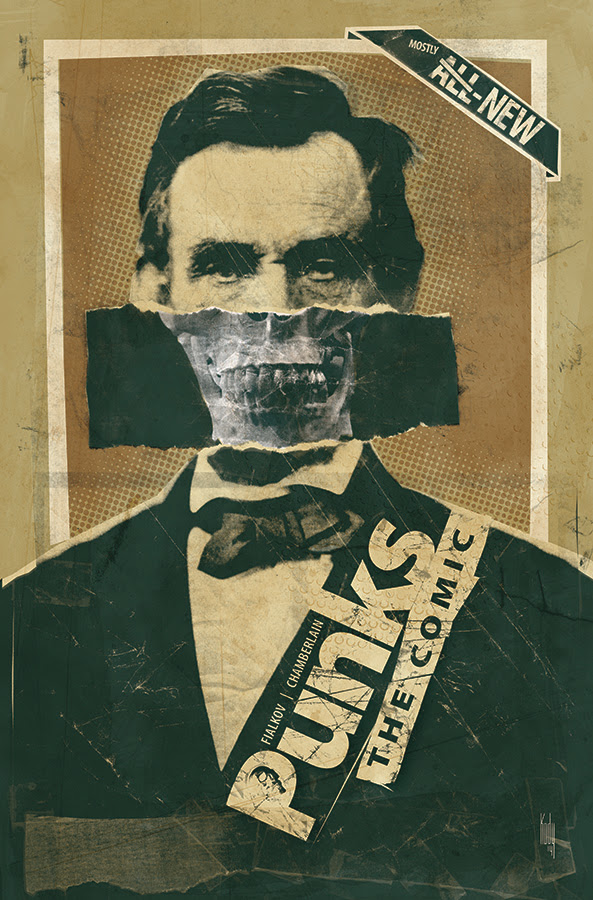 The cult hit comedy returns with new stories and a bonus classic in the back of the issue in PUNKS: THE COMIC #1. From Eisner and Harvey award nominees Joshua Hale Fialkov (The Bunker, The Ultimates) and Kody Chamberlain (SWEETS, The Ride) comes the latest dose of irreverent, fun-loving hilarity that fans have been waiting for.

Dog, Skull, Fist, and Abe Lincoln live in a house, beat the #%?! out of each other, and frequently humiliate themselves. There is bleeding and sadness; Morrissey would likely approve.

“Returning to both the world of Punks and Image is like a warm, slimey sock,” said Fialkov, before pausing to rethink the comparison. “No. That’s a terrible analogy. It’s like a pungent pair of goiters. No. This isn’t going well. Um… Getting to make new Punks for a whole new audience is a dream come true. And not one of those weird dreams with too much massaging.”

“Exactly ten years ago, Josh and I took an obscure political figure named Abraham Lincoln and thrust him into the mainstream of American pop culture with the very first issue of Punks,” said Chamberlain. “As usual, Hollywood wanted a piece of this newly unearthed ‘hero’ and Abe quickly found himself immersed in a whirlwind of feature film projects and various promotional opportunities.”

Chamberlain continued, “Let me be absolutely clear, I don’t think what Abe did could be considered ‘selling out’, in fact, I’m genuinely thrilled for the success and popularity he’s found as a result of our well-made comics. Still, as a fan of his early work I couldn’t be more excited about this new attempt to revive his failed comic book career.”