LOS ANGELES, CA (November 5, 2018) – BOOM! Studios today revealed a first look at GIANT DAYS: WHERE WOMEN GLOW AND MEN PLUNDER #1, an all new over-sized special from creator John Allison in December 2018. Surprise, Ed Gemmell’s flying to Australia for the holidays! He’ll get to spend a glorious vacation meeting his girlfriend’s family and paying her dad back for the plane tickets with hard, physical labor . . . all while basking in the warm glow of holiday sunshine and cheer.

Launched in 2015 under BOOM! Studios’ YA-focused BOOM! Box imprint, Giant Days was originally a webcomic from 2011 that was written and illustrated by Allison. Since then, Giant Days has featured the art of acclaimed artists including Lissa Treiman, Max Sarin, Liz Fleming, Julia Madrigal, Jenn St-Onge and more. The world of Giant Days has expanded to include young adult novels at Abrams Books and two previous critically-acclaimed holiday specials.

GIANT DAYS: WHERE WOMEN GLOW AND MEN PLUNDER #1, this year’s holiday special, marks the first time that John Allison has both written and illustrated a full-length issue of Giant Days at BOOM! Studios.

“This has been an incredible year for Giant Days, so we’re celebrating it with an extra-large issue chock full of EXTREMELY Australian Christmas traditions for Ed Gemmell, but I promise there is plenty to love no matter where in the world you are!” said Shannon Watters, Senior Editor, BOOM! Studios.

Print copies of GIANT DAYS: WHERE WOMEN GLOW AND MEN PLUNDER #1 will be available for sale on December 5, 2018 at local comic book shops (usecomicshoplocator.com to find the nearest one) and at the BOOM! Studios webstore. Digital copies can be purchased from content providers, including comiXology, iBooks, Google Play, and the BOOM! Studios app.

For more on GIANT DAYS and other projects from BOOM! Studios, please visit www.boom-studios.com and follow @boomstudios on Twitter. 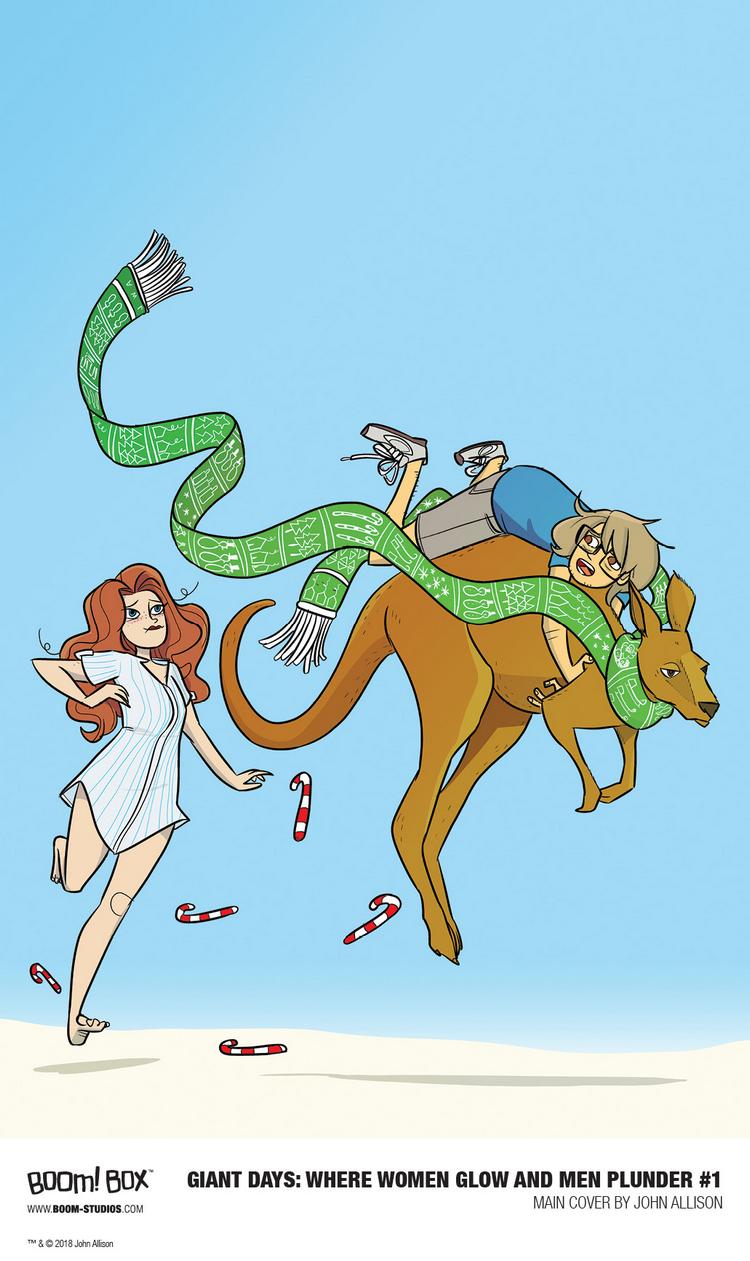 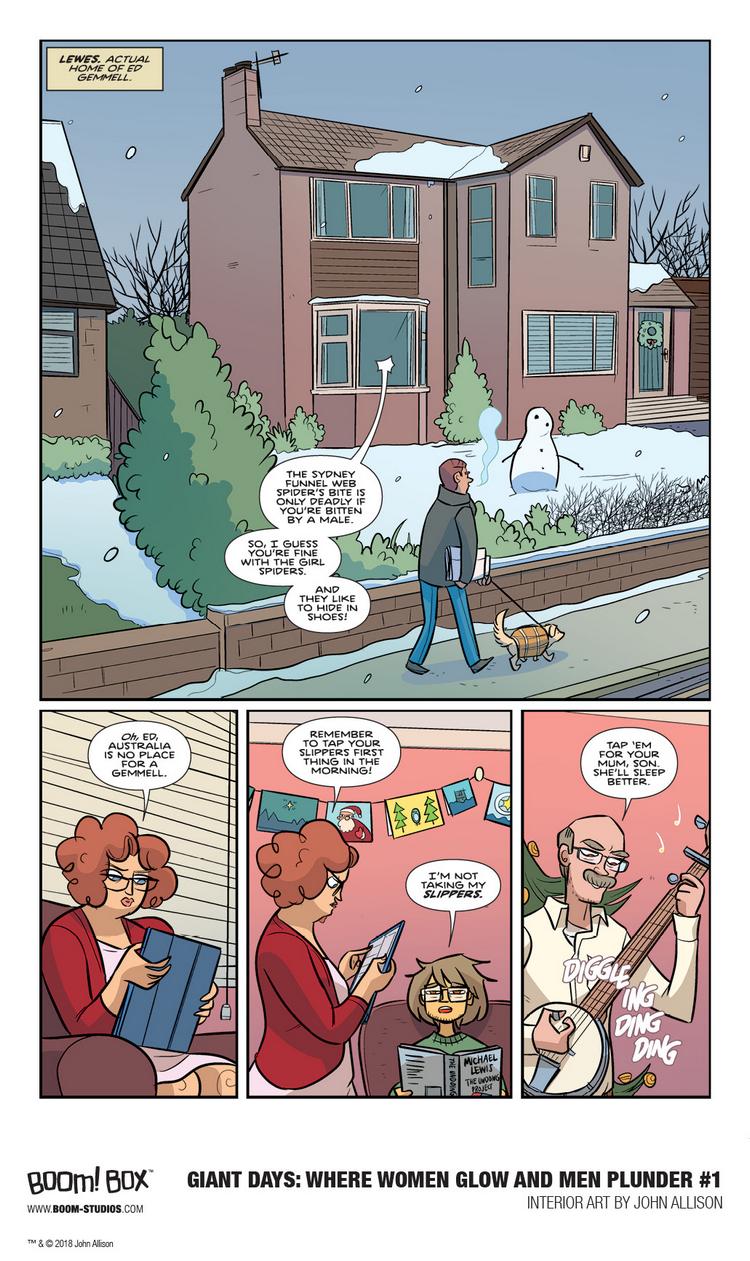 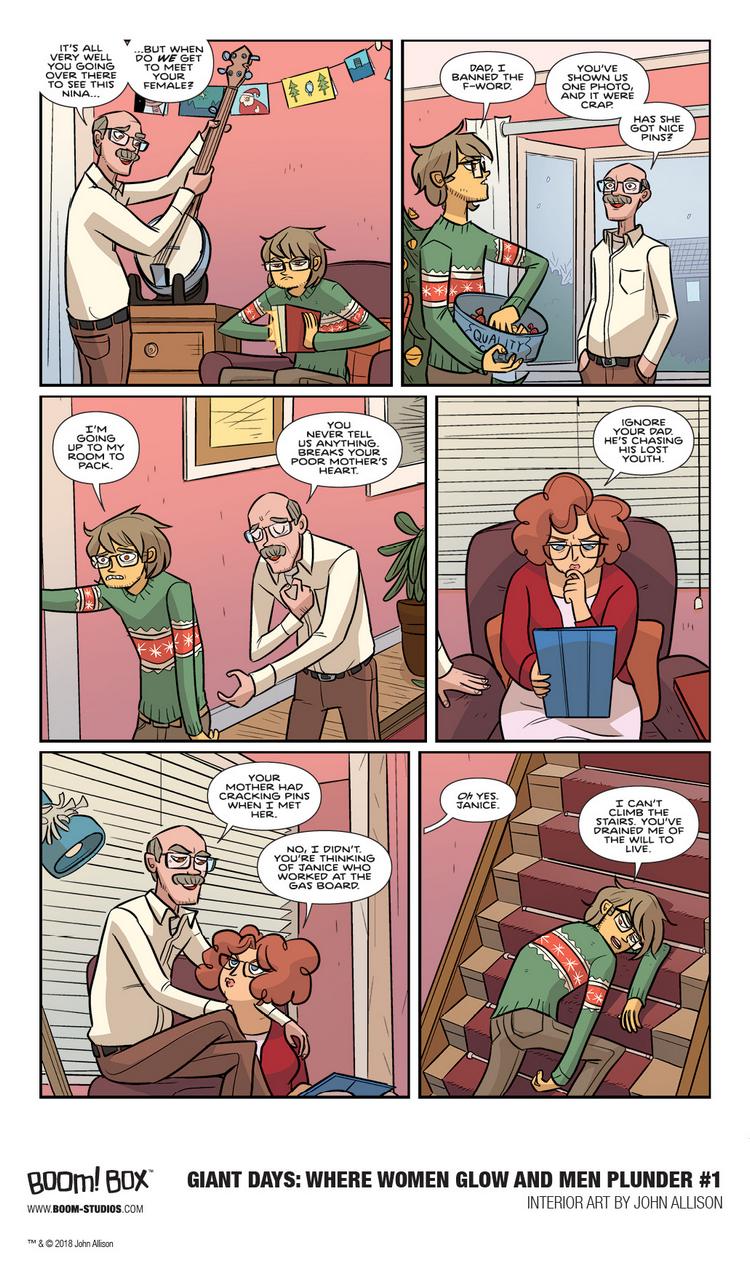 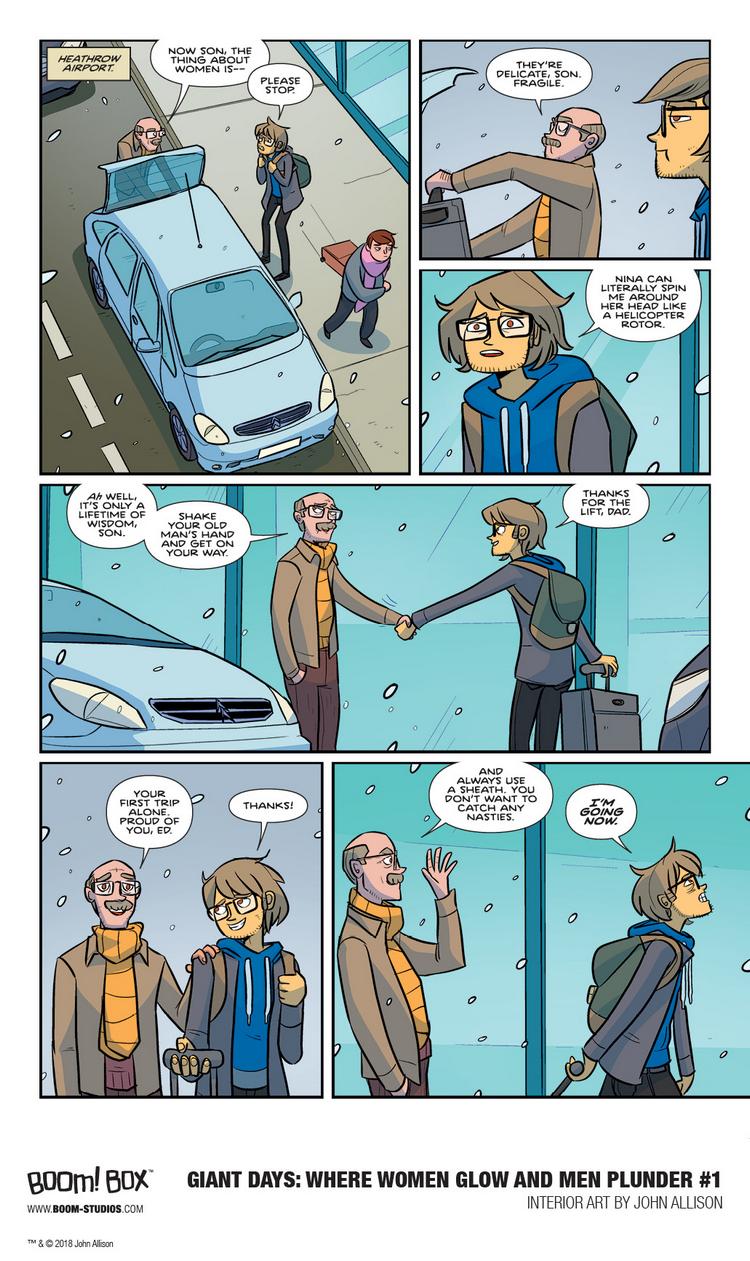 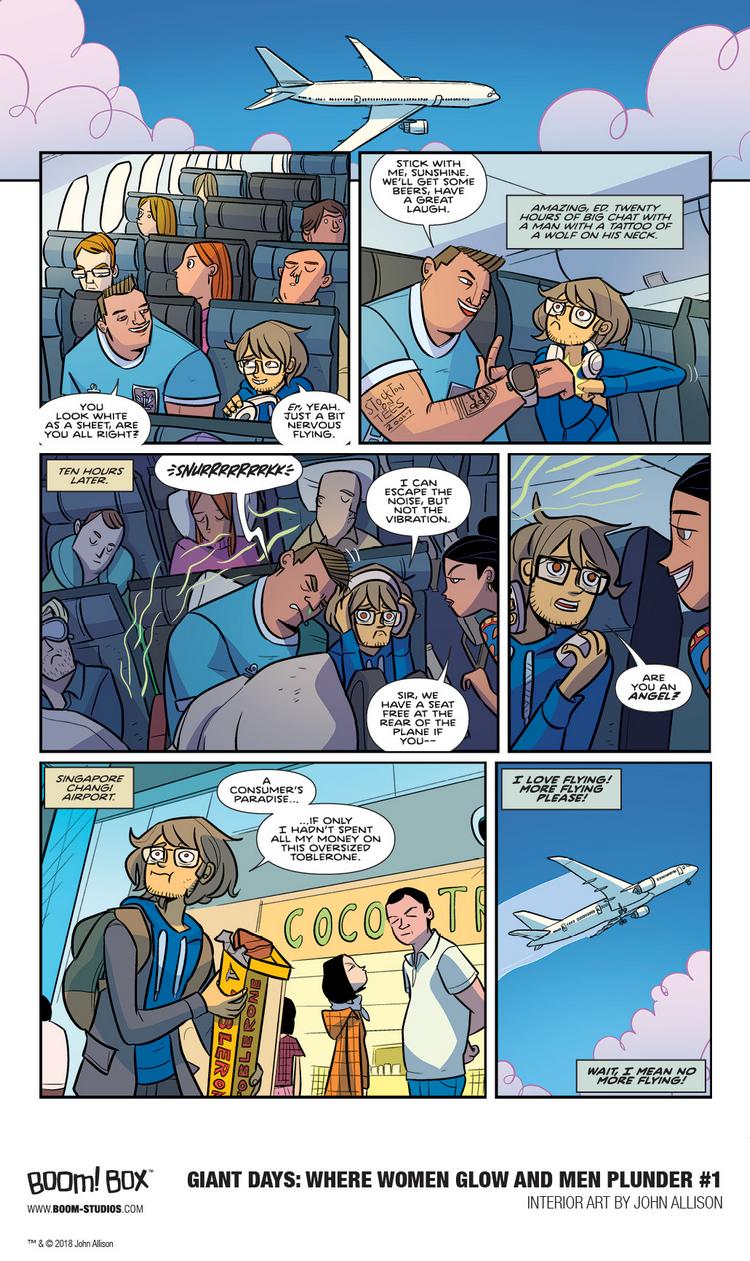 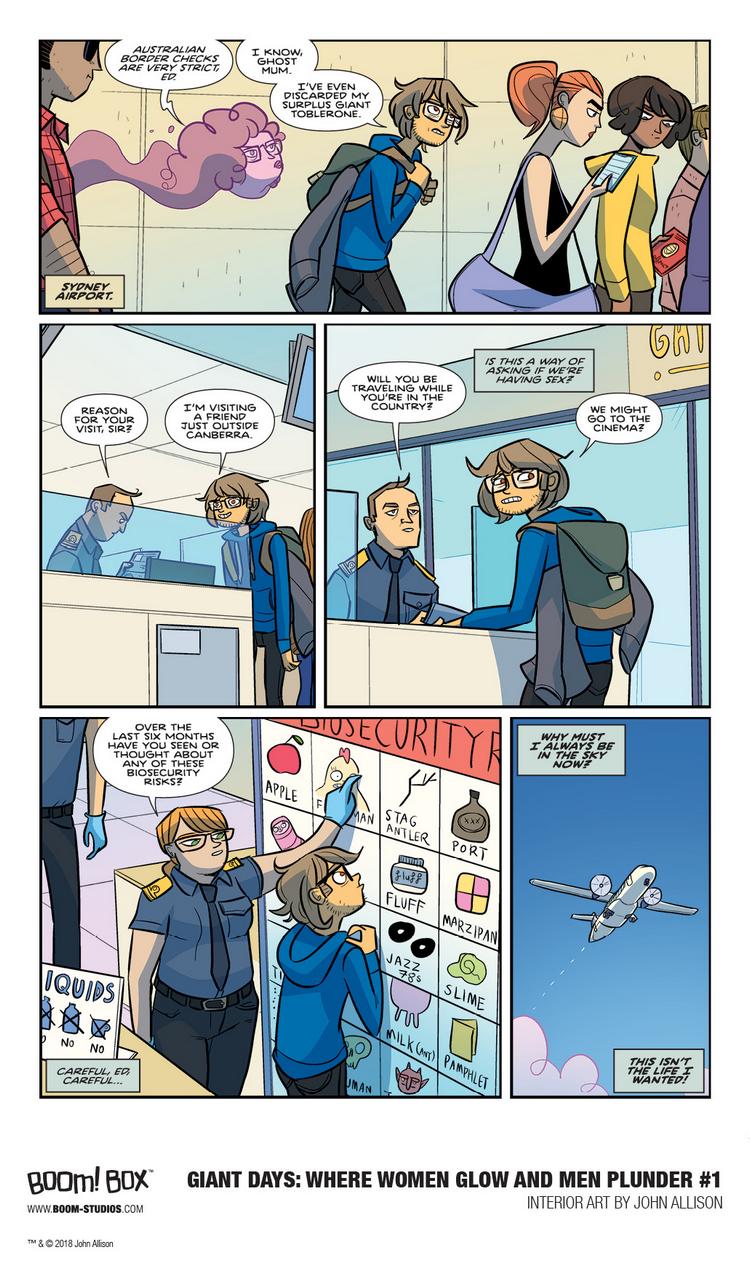