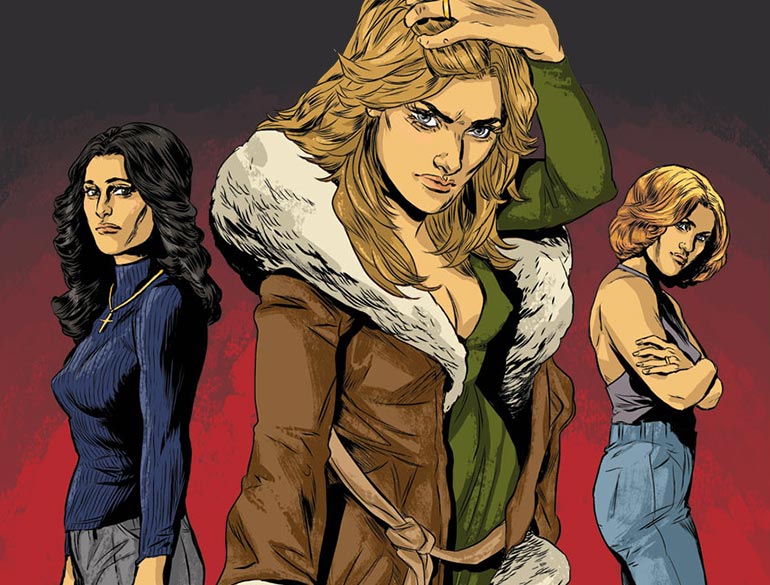 Today we’re looking at The Kitchen, an eight-issue miniseries from Vertigo that features not one, not two, but three female protagonists. Against all odds and expectations, Angie, Kath, and Raven are three Irish-American housewives in 1970s New York City who take over Hell’s Kitchen’s organized crime scene.  We’re chatting with writer Ollie Masters about the creation of the series, its inspiration, and the influence of the other members of the creative team. 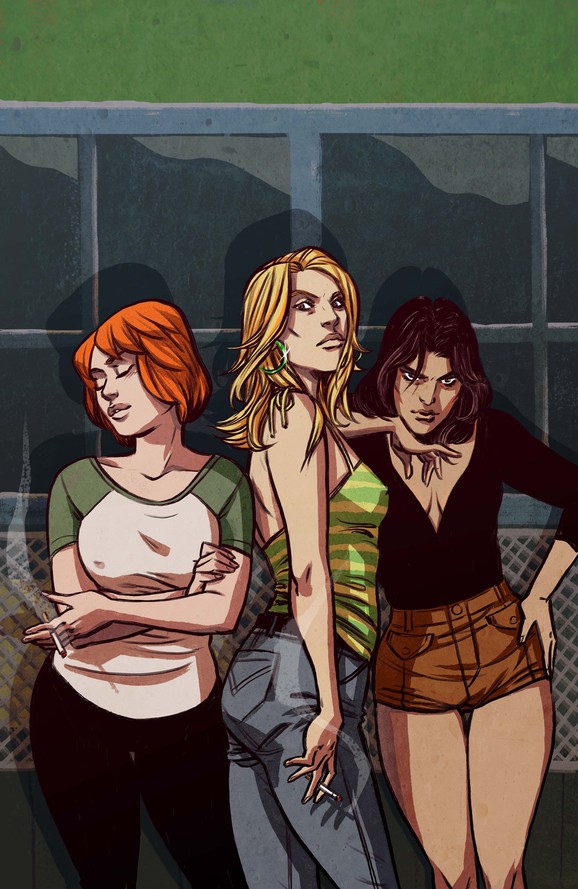 Who are the women of The Kitchen?

Kath and Raven are two sisters who have grown up in the mob life and know it well. Their father was a Hell’s Kitchen gangster back in the 60s and Kath meets her husband, Jimmy, through the mafia. Jimmy worked for her father until he eventually struck out on his own with Johnny and Rob. Raven ends up with Johnny due to a one-night stand and Catholic guilt, while Angie has never loved her husband Rob as much as he loved her.

When their husbands all end up in prison, the three women start hustling on their own and truly evolve. Kath and Raven pick up the collecting game in a way that would have made their father proud while Angie, with the help of enforcer Tommy, becomes a hard-hitting enforcer in her own right.

Once they get going, things pan out rather smoothly — or at least they were, until their husbands get out of jail. 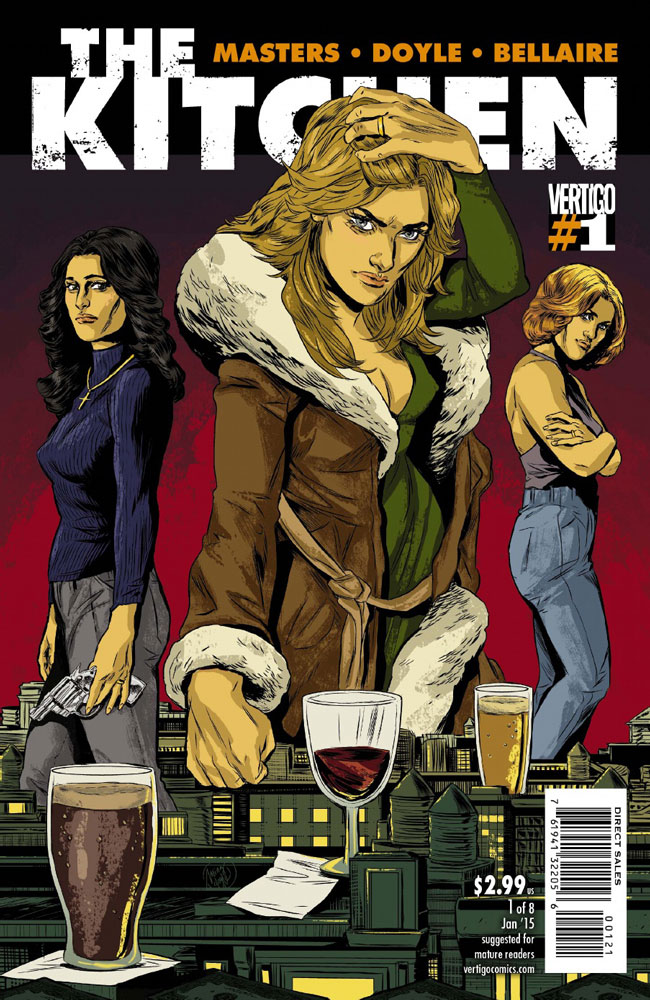 J. A. Micheline: I really want to know more about the steps that led to The Kitchen’s creation. You said in a previous interview that you wanted comics to be as inclusive as possible and confirmed that the comic was a conscious effort to reach out to previously neglected audiences—but was a story about women a concrete goal for you?

Ollie Masters: I don’t think it was a concrete goal before I started on The Kitchen. A lot of this really hit me when I was just working on it as an idea (way before I’d even gotten a pitch together). I started out with this simple idea about three wives taking over their husbands’ gang. That was the core of it, but as I was developing the characters, I realized I was going for these easy stereotypes in how I portrayed Kath, Raven, and Angie and not really doing them the justice they deserved.

Working on The Kitchen really made me think about representation and diversity in my work. Just because I’m a white/straight/male it doesn’t mean that should be the default for the characters I write. Sometimes, though, that needs to be a conscious effort because it’s easy to slip into just writing what you know. 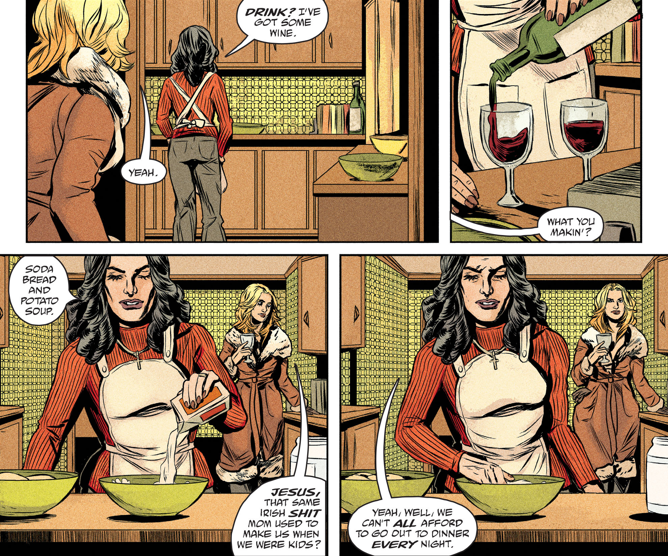 JAM: In my mind, gangster films and stories have been seen as the purview of men not just because action is often marketed to them but also because part of the “gangster package” has been machismo, proving to others that you’re a man’s man, so to speak. How has that aspect of the genre played a role in your writing of the comic?

OM: It’s definitely a part of it because, as you said, it’s a part of the “gangster package” — but I guess in some ways it’s a reaction against that. That macho “I’m a real man” thing just always seems like posturing to me and a lot of times there’s more than a little insecurity that comes with it.

In The Kitchen, the girls prove themselves to be just as adept at the gangster game as anyone else, but the husbands not only won’t take them seriously, but are actually offended by it. A lot of that is not just because their wives are better at it than them (and that hurts their pride), but also because they’re still stuck in a mindset of “the man goes out and earns the money while the woman stays at home and looks after the house.” If ‘their’ women are out on the streets making money and doing a better job of it than them, then they can’t help but see themselves as less of a man because of their messed up mindset.

This is why I wrote Tommy in the comic — to show that guys don’t have to be that way. He’s the toughest gangster in Hell’s Kitchen, who’s lived the life harder than anyone else but he isn’t a macho guy. He doesn’t view himself as a man’s man and sees the girls as his equals. 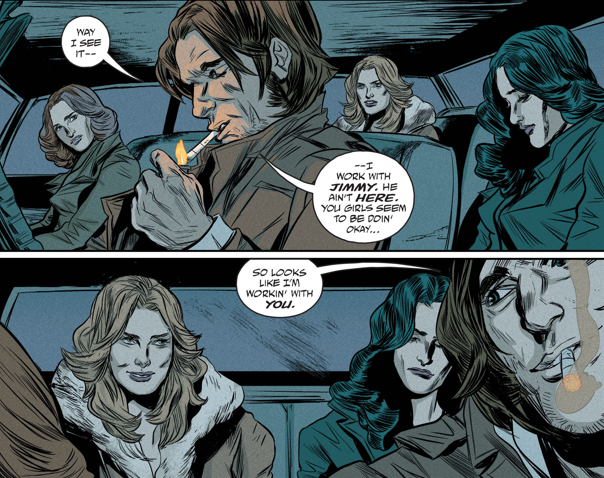 JAM: Aside from you, the entire creative team is made up of women: Jordie Bellaire on colors, Becky Cloonan on covers, and Ming Doyle doing the interior art. Was that just the way things shook out or were you specifically looking to work with women on this project?

OM: It was kind of mixture of both but leaning more towards it just being the way it shook out. I always liked the idea of having a female artist for The Kitchen, but it wasn’t an all or nothing situation. We ended up with three women on the creative team simply by picking our favourite people to work on the book.

JAM: Has working with a team of women influenced your writing of The Kitchen?

OM: I can’t say it’s consciously influenced me but I guess it must have in some way. If it has, all I can say is it must have been a positive influence because working with Ming, Jordie, and Becky has been great. They’re three of the hardest working people in comics and they’ve really pushed me to become a better writer. 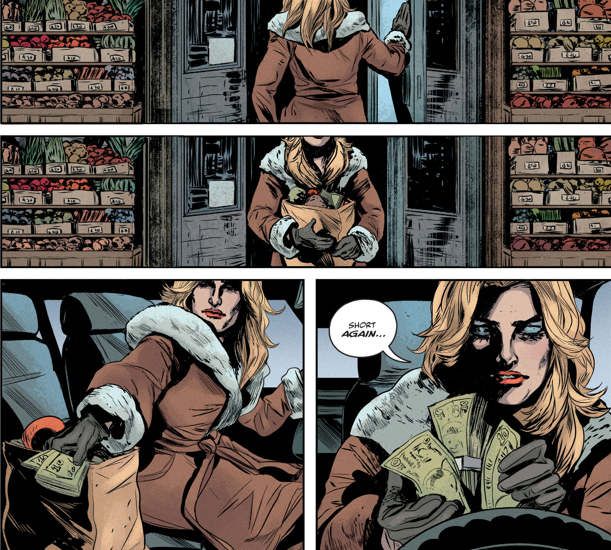 JAM: Which of the three women protagonists is your favorite? Why?

OM: I don’t know… It’s hard to pick one, they’re all my favourites! If I had to though… it would probably be Angie. She’s the most honest out of all of them. There’s no bullshit with her.

JAM: Last question—I’m not sure if you’re aware of this, but Catwoman has also moved in the mafia direction, so we’ve now got two great books with women as mafia bosses, one Irish and one Italian. Give me a prediction: what’s the next big genre that women take over?

OM: Yeah, I am aware and I really dig that book. I dunno about what next though… hopefully all of the genres! 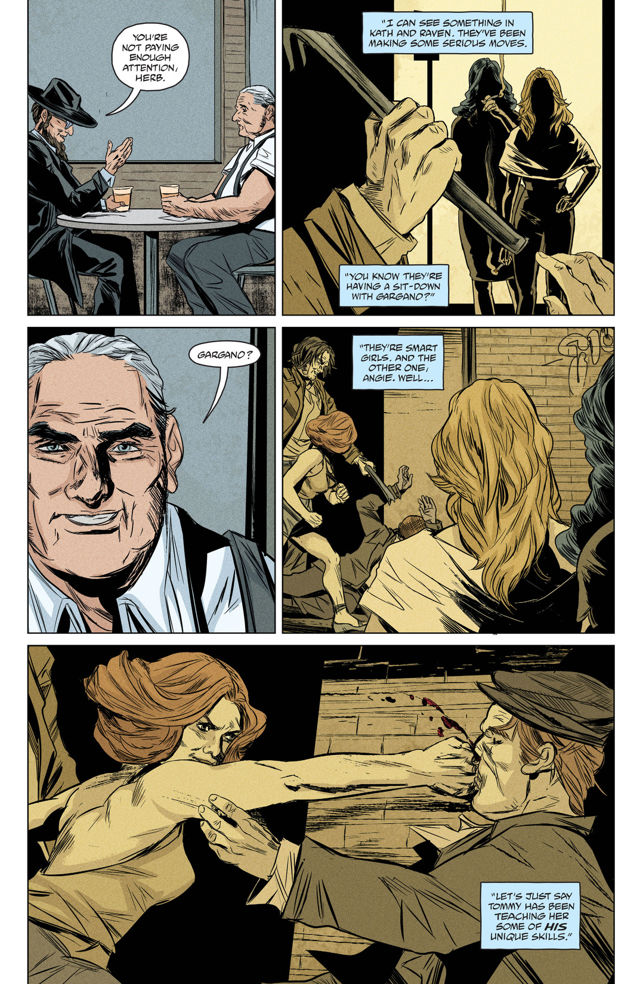 “Not only are we given scenes with each woman dealing with their husbands coming back into their lives, but we are also shown scenes in which they’re doing their gangster thing … the creative team is demonstrating equal validity to these typically feminine and masculine narratives.

“This isn’t some Real Housewives of Hells Kitchen, where the women shop and do their nails, gossiping about their dirty husbands. This isn’t the Sopranos, where wives can pretend they aren’t complicit as they drive their SUVs around town. These are working women, taking over the reins of their husband’s jobs as women did when men went to war. “