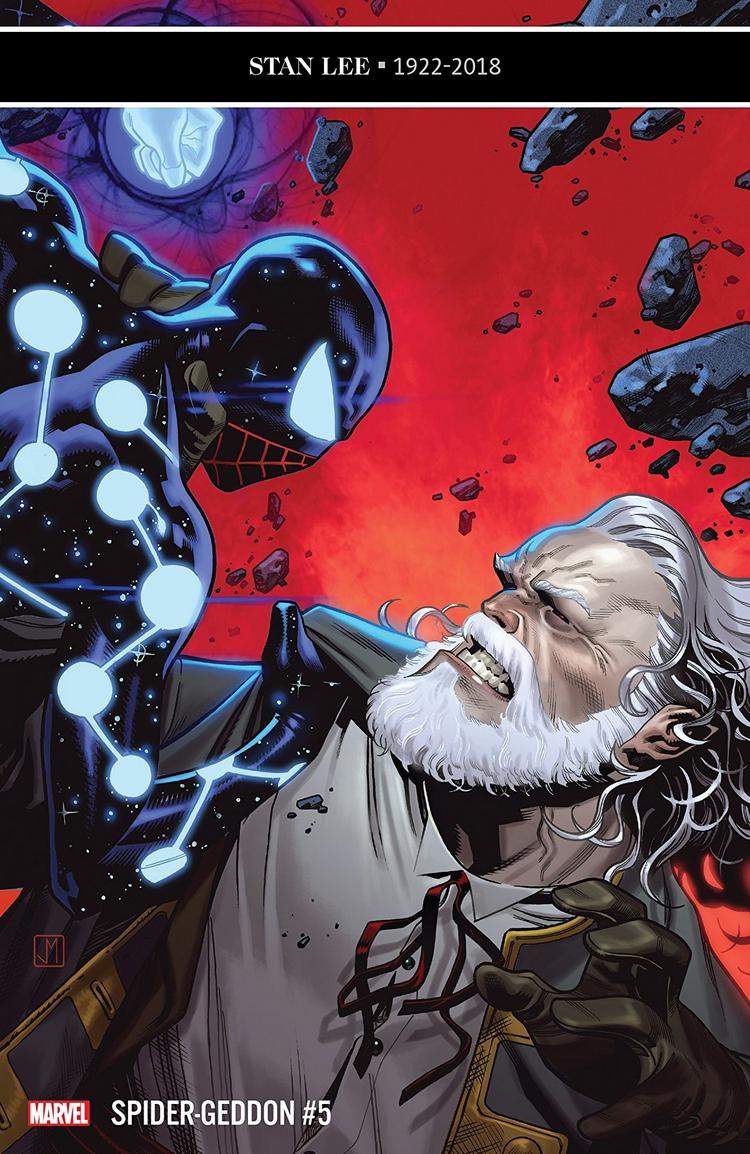 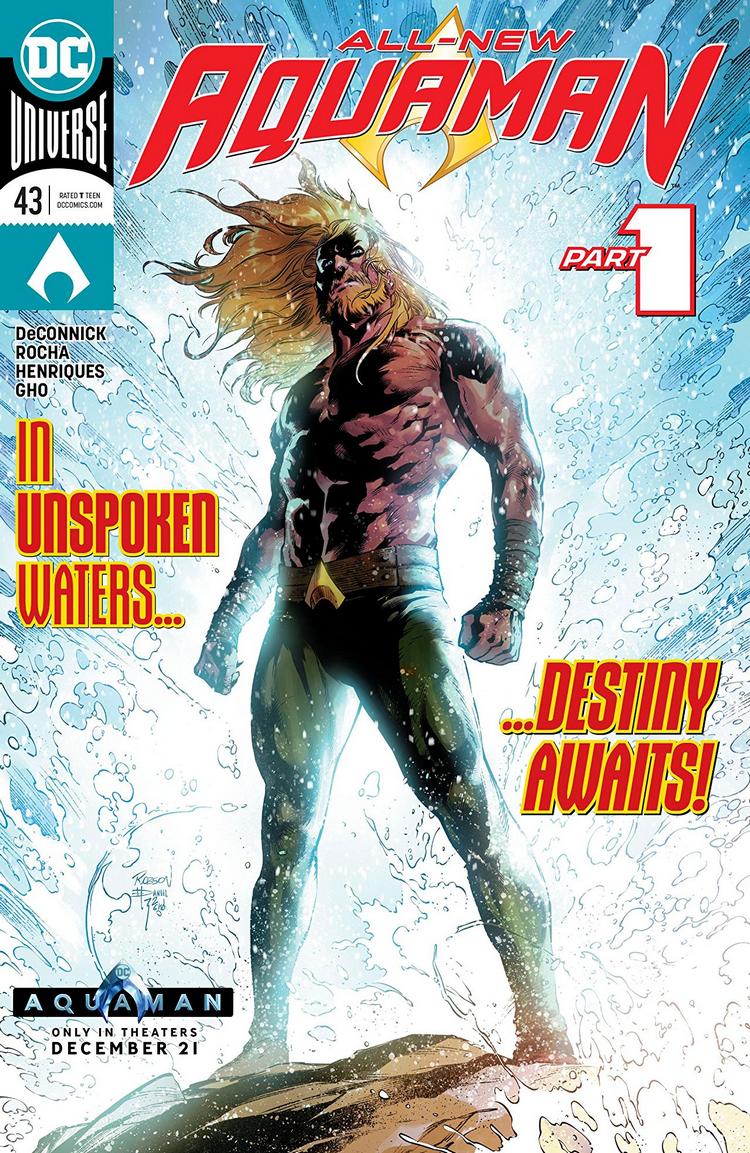 The tides turn for the Sea King with a new creative team! Star scribe Kelly Sue DeConnick (Captain Marvel, Pretty Deadly) and red-hot artist Robson Rocha (TEEN TITANS, SUPERGIRL) take the rudder to steer Aquaman into uncharted waters. In the wake of “Drowned Earth,” an amnesiac Arthur washes ashore on a remote island, and ends up being cared for by a young woman named Callie, who’s just a little TOO curious for comfort. And as a lifetime of horror movies has taught us, there’s something strange going on in this island village. Aquaman needs to come to his senses quickly…or he might wind up sleeping with the fishes instead of chatting with them.

Why It’s Hot: Between the epic Drowned Earth story wrapping up a few weeks back, and Kelly Sue DeConnick joining their ranks, DC Comics is making sure that there is quality Aquaman content ahead of the character’s solo movie opening in North America this week. This is very smart of the publisher, as the movie *should* be a smash hit that will leave people wanting more of the King Of Atlantis. Throw out all the movie chatter and you’re still left with one of the most popular writers of the past decade making the jump to DC and working with an artist who is turning out arguably the best work of his career. This is as close to a no brainer pick as there is this week. 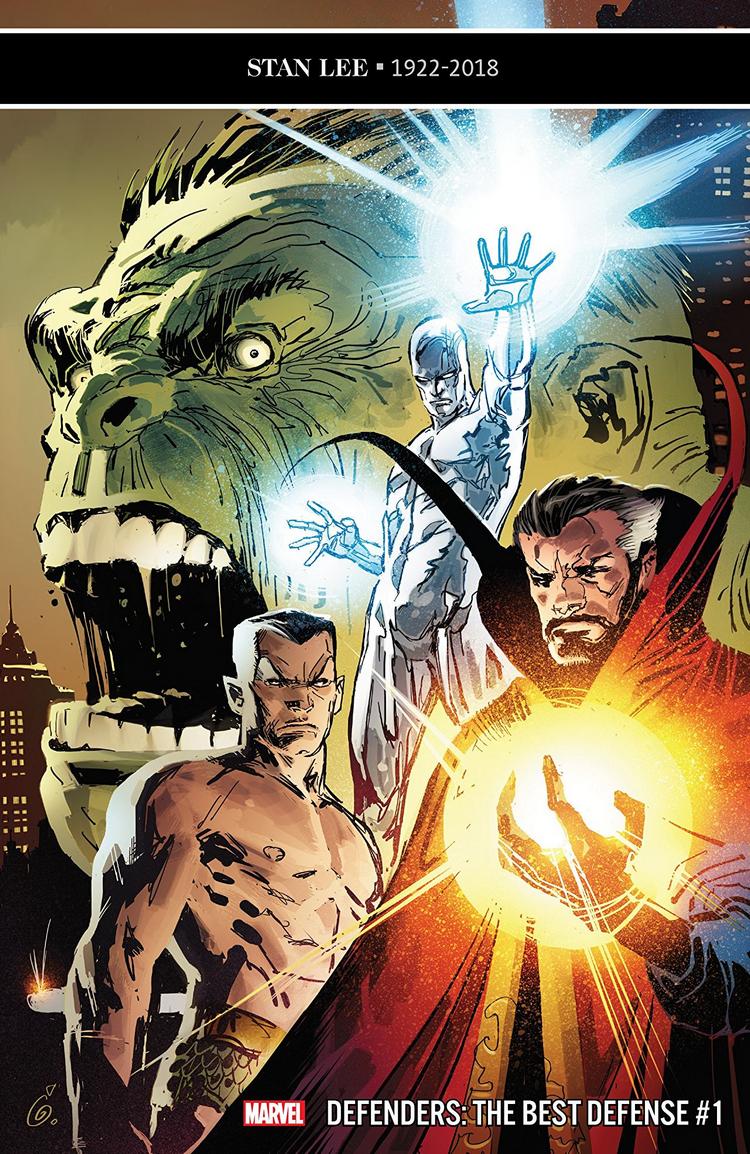 • The lost Atlanteans. The Train. The bedsheet man. Dead Steve. The Stock Exchange of Souls. Trust us, it all makes sense.

• In fact, it makes enough sense to destroy our entire solar system… Unless four very different heroes can come together to stop it.

Why It’s Hot: Sure, this one month story told over four character one shots and this final team up issue had some good talent attached when it was announced. I don’t think many were prepared for just how good those one shots would be. Some of Marvel’s best talents showed why they are considered among the best over the past few weeks, and now the story all comes to a head with the stellar Immortal Hulk creative team bringing The Defenders back together again. It’s always nice to be pleasantly surprised, even though I probably shouldn’t have been in this case. 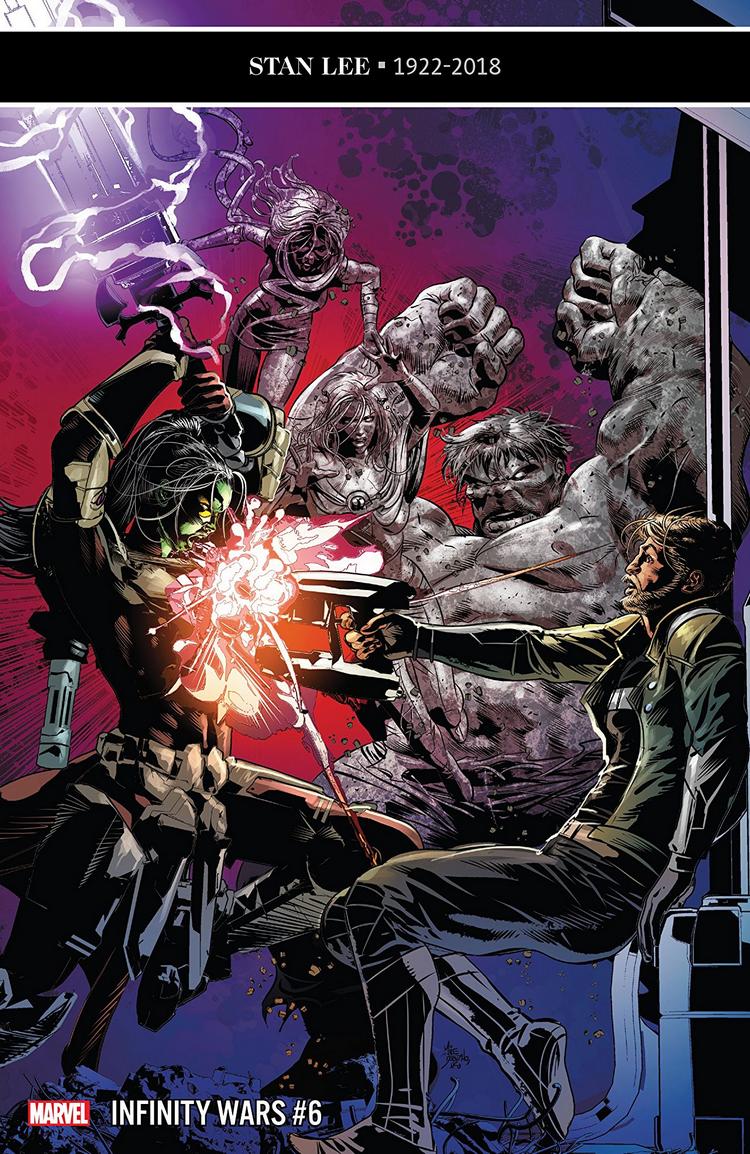 Why It’s Hot: Not only does this issue mark the end of one of the most underrated Marvel events ever, but it also marks the end of Gerry Duggan’s run with the Guardians Of The Galaxy. Over the past few years Duggan has built a long running story from one of the best GoTG stories to one of the very best that the cosmic side of Marvel has to offer. From All New Guardians Of The Galaxy #1 to the return of legacy numbering in Guardians Of The Galaxy #146, to Infinity Countdown, and all the way through Infinity Wars what Duggan has accomplished should be considered the very best Guardians Of The Galaxy run ever. He married the Bendis/movie era with the beloved DnA era in such a way that shouldn’t have been possible. The end result was a special, severely underrated run. That all comes to an end with a huge issue this week, so thank you to Duggan and all of his collaborators from Aaron Kuder to Mike Deodato and everyone in between. Oh, and Donny Cates, no pressure in following up this run, except for all the pressure *inserts winky face emoji* 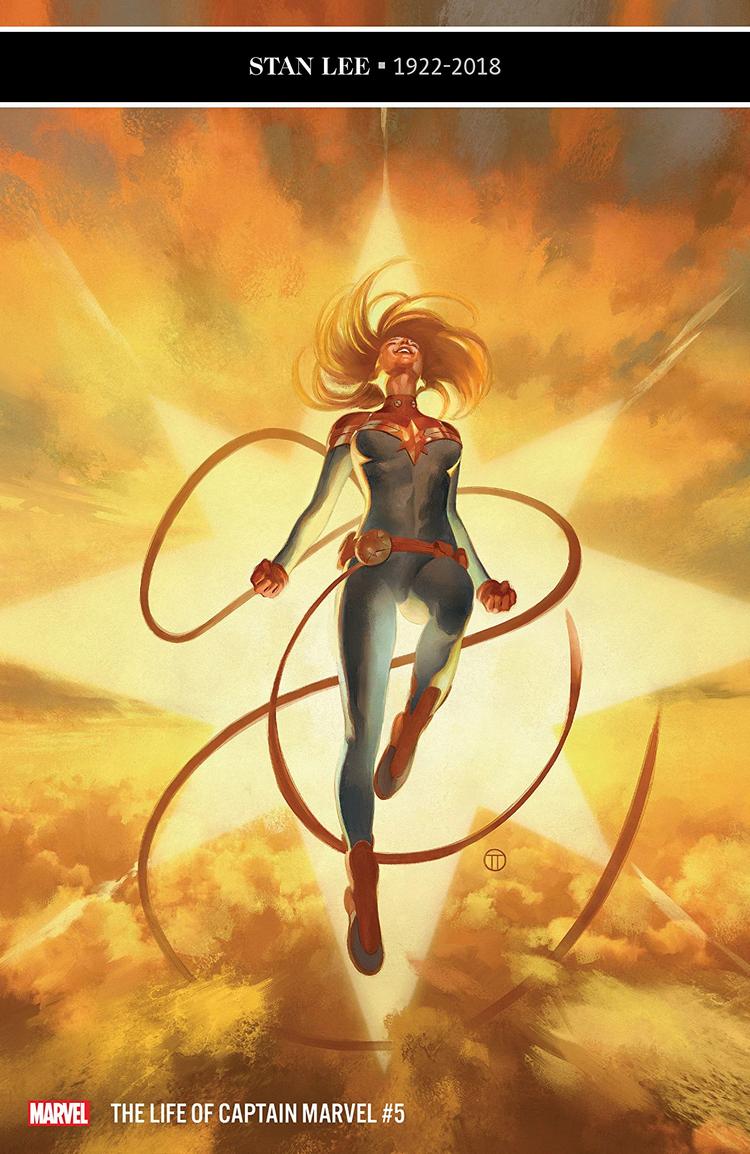 Carol Danvers believed she was alone in this world, the product of a chance encounter combined with a lifetime of heroism. But her destiny runs far deeper than she’d dreamed. Now a bloodthirsty Kree soldier is at her doorstep – but will she face this final challenge alone?

Why It’s Hot: Margaret Stohl’s time with Carol Danvers comes to an end with the finale to the well received story that redefines Captain Marvel’s history and place in the Marvel Universe. This story would make for an amazing last minute holiday gift for those in your life eagerly anticipating Carol’s big screen debut in a few months. On that note, it ending now makes way for there to be a definitive origin for the the character in collected form when her movie presumably becomes the next big hit from Marvel Studios. Whether you are finishing up the series this week, rushing out to pick up all five issues this week, or waiting for the collection just know that this series is well worth your time, and should become an evergreen story for Marvel from here on out. 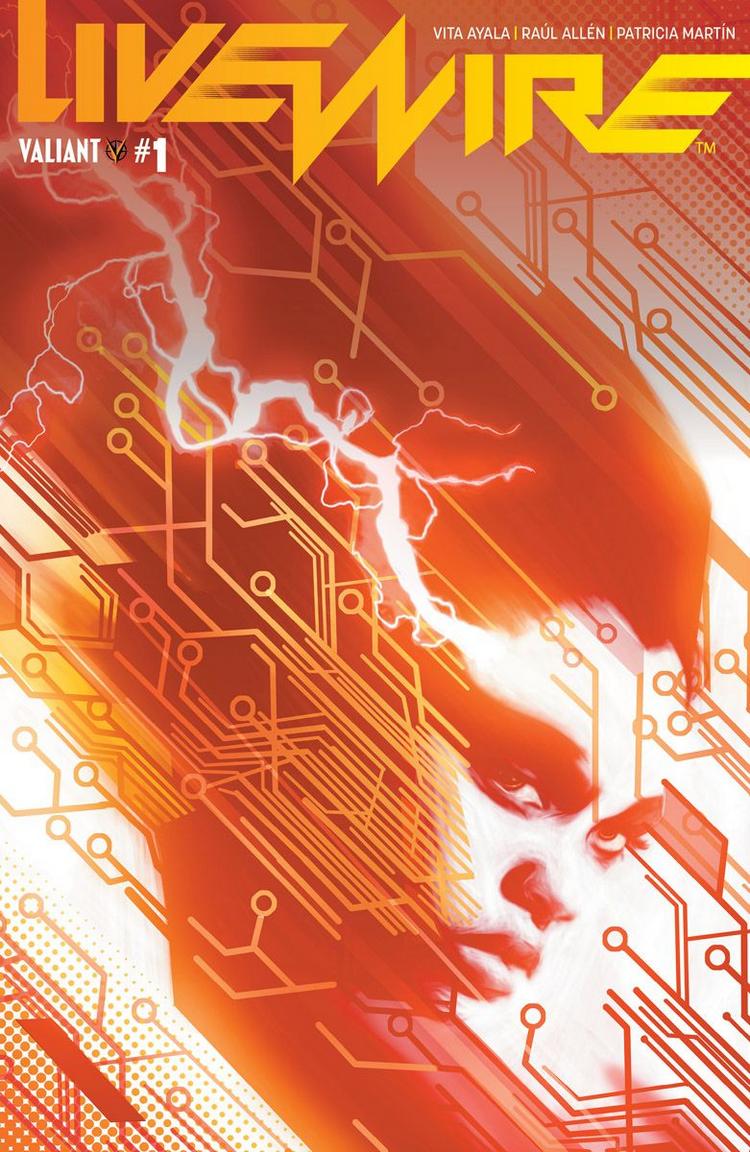 ALL-NEW ONGOING SERIES! FOR THE FIRST TIME, LIVEWIRE TAKES CENTER STAGE!
Accomplice. Mentor. Savior. And now, Enemy of the State. Seeking to protect other vulnerable super-powered psiots like herself, Livewire plunged the United States into a nationwide blackout with her technopathic abilities, causing untold devastation. After choosing the few over the many, she must now outrun the government she served – and those she once called allies. With the whole world hunting her, what kind of hero will Livewire be…or will she be one at all?
From rising star Vita Ayala (Supergirl) and astounding artists Raul Allén and Patricia Martin (SECRET WEAPONS) comes an electrifying new series that will launch the Valiant Universe into a new age of champions!

Why It’s Hot: Livewire is getting her first ongoing series ever! This is the type of comic that Valiant does best. Despite having lost the inherent advantage of being the new kid on the block, the publisher continues to make sure that new comics walk the tightrope of being very accessible to new readers while making long time fans happy. It helps here that they’ve enlisted an extremely talented creative team. The Allen/Martin art team ensures that the story and words of budding superstar Vita Ayala look as good as they possibly can.

• The grand conclusion to the Spider-Event of 2018!
• The Spiders have been split apart; they’ve been betrayed-and some have died. It’s time for the final battle.
• The end of the Spider-Verse is here.

Why It’s Hot: Spider-Man: Into The Spider-Verse soared to the top of the box office this past weekend, and has been heralded as one of the best superhero movies ever. With Miles’ new series beginning last week, this week sees the focus shift to the greater Spider-Verse. Miles is here, but so are your other favorites from the film. Even more important is the fact that this story has been a whole lot of fun for Spider-Man fans everywhere, and has been able to stand on its own as an event without dragging the flagship Amazing Spider-Man into the fold. That goes to show just how strong the Spidey brand is at the moment, and with their scheduling Marvel knows it. This story started on the heels of the Spider-Man video game being released for PS4, and ends the week after a Spider-Verse movie took the world by storm. The Marvel employee who set up that schedule deserves a raise, as all eyeballs that would be on this comic, should be. It’s good to see that the creative team was up for the challenge. 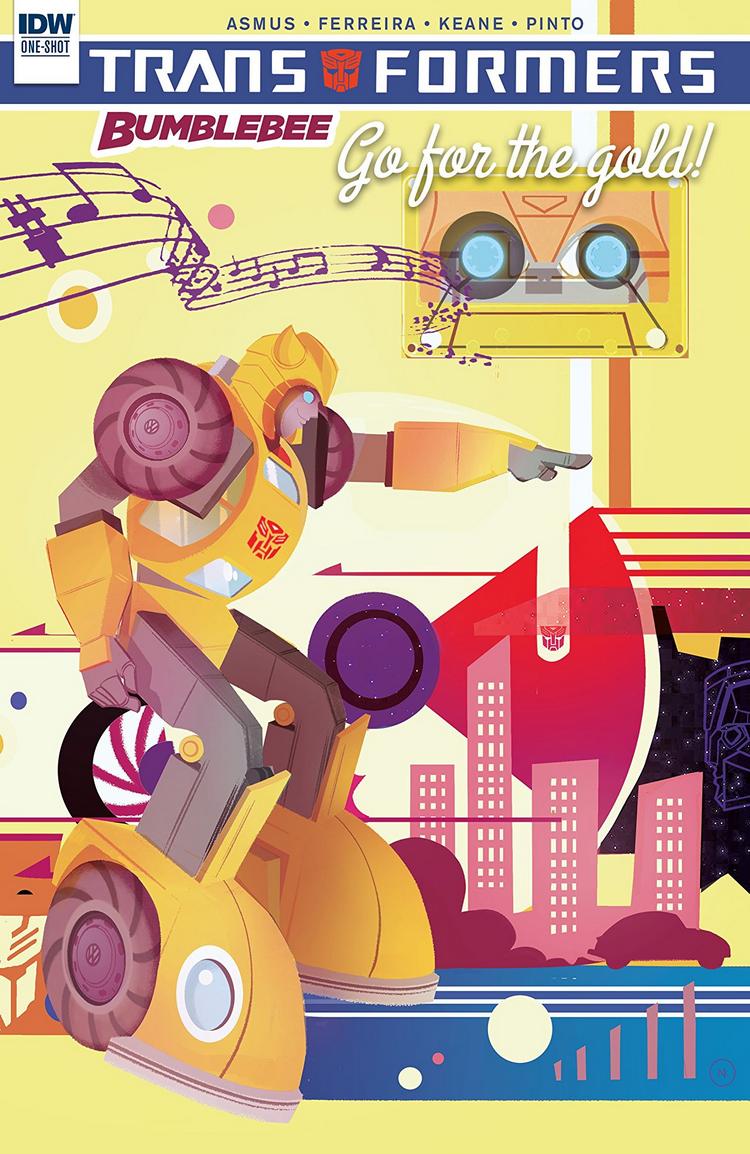 There are a lot of things other Autobots can do that Bumblebee cannot-they drive faster, hit harder, fly! But if there’s one thing Bee has over any of them, it’s a bigger heart! When his team’s in danger, Bumblebee comes to the rescue in this fun adventure that pits the Autobots against Starscream’s evil Decepticons!

An exclusive story tying into the Transformers: Bumblebee-Win If You Dare original graphic novel, on sale now!
More kid-friendly Bumblebee content just ahead of the new movie, out December 2018!

A one-shot adventure!
Tying into the Transformers: Bumblebee-Win If You Dare original graphic novel, on sale now!
More kid-friendly Bumblebee content just ahead of the new movie, out December 2018!

Why It’s Hot: Okay, I know Comicosity is a comic book site, but I once again have to mention how a publisher has done a great job with timing their releases to an adventure on the big screen. By most accounts Bumblebee is not only the best live action Transformers movie, but a legitimately good coming of age action movie. What IDW has done in creating an all ages one shot that fans, new and old alike, can flock to after the movie isn’t a novel concept (see multiple entries in this column alone). What is interesting is how the publisher is doing their best at making sure interested fans stick around. If you, or a kid you know like this standalone one shot they can move on to the Bumblebee OGN done in the same style. Then from there this hypothetical reader can move on to the hundreds and hundreds of Transformers comics from the publisher. More so than any comic timed to release in conjunction with a story in another medium in recent memory this issue serves as a gateway comic. Hopefully the strategy works, and other publishers follow suit.