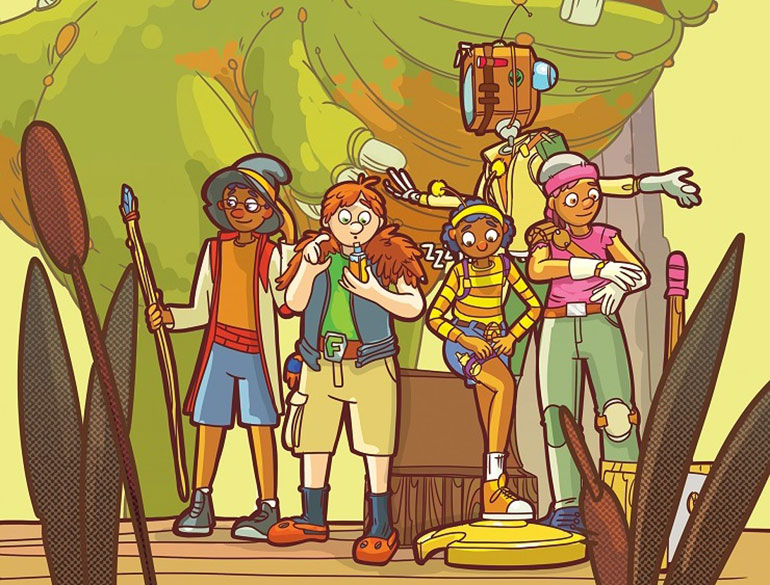 It’s one thing for video games to be a distraction, but I never imagined they could literally devour my schoolwork. Unfortunately for Dewey Jenkins, he is very much aware.

Dustin Hansen and Corey Breen come together in My Video Game Ate My Homework, which details Dewey’s journey to recover a science project, leading him, his twin sister, Bee, and their friends, Kat and Ferg, into the digital depths of a video game. As they trek, they gain new abilities and new awareness for themselves and each other. For Health and Inclusivity, I thought it would be great to break down how this new comic can help us out. 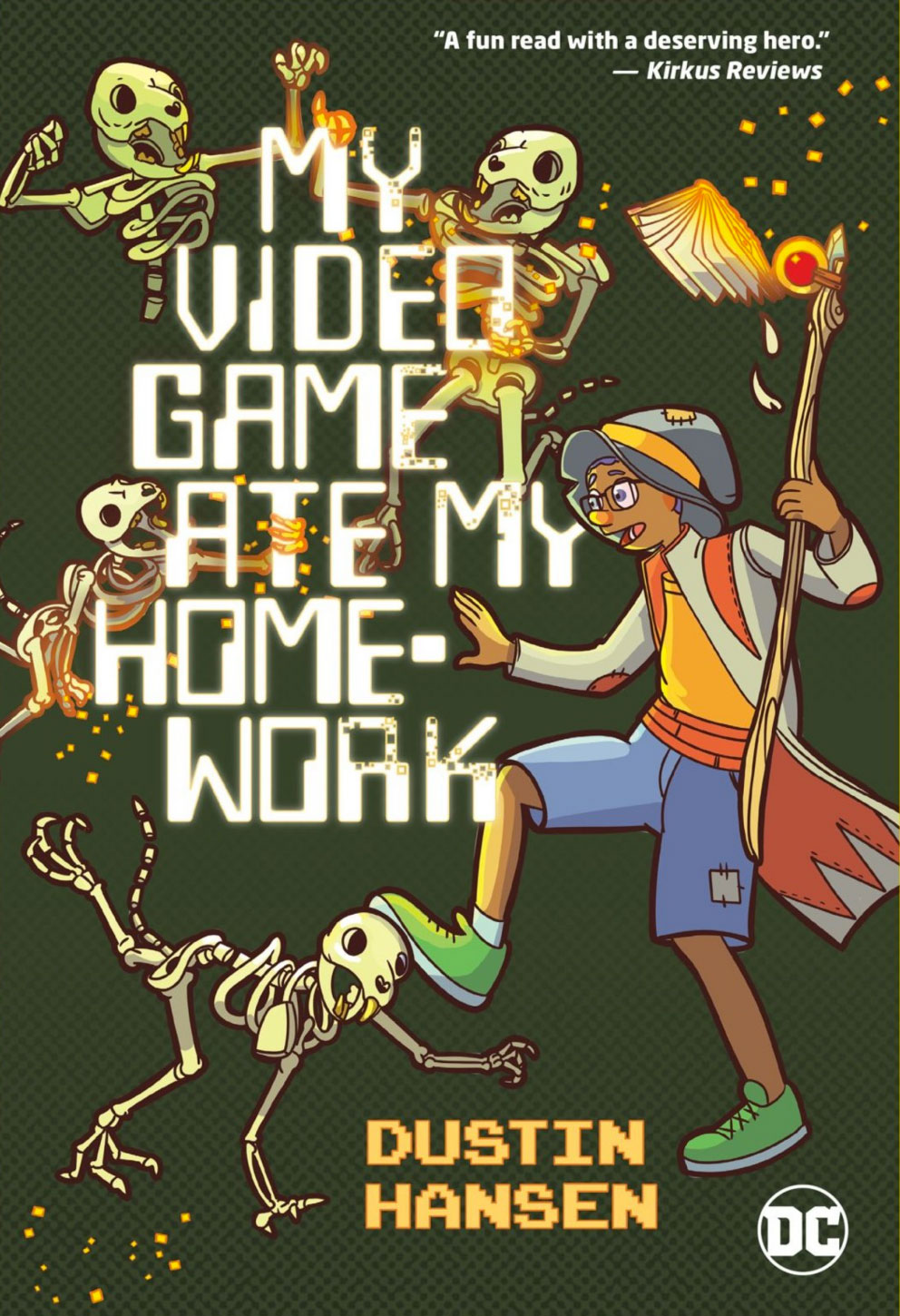 With the Valley Junior High Science Fair approaching, Dewey has come up with an expert idea: A volcano. While Bee and their friends may not see why initially, Dewey shows that he has done some hard work to win the prize for first place: a virtual reality video game console.

This same console, though, causes trouble for the crew. It opens up a portal to a video game world, allowing the friends to really practice magic and might, though after it suddenly spits them out, it steals Dewey’s volcano. Without his project, there’s no prize and the looming threat of summer school, leaving Dewey discouraged until Ferg rallies the team and they embark on a virtual adventure. 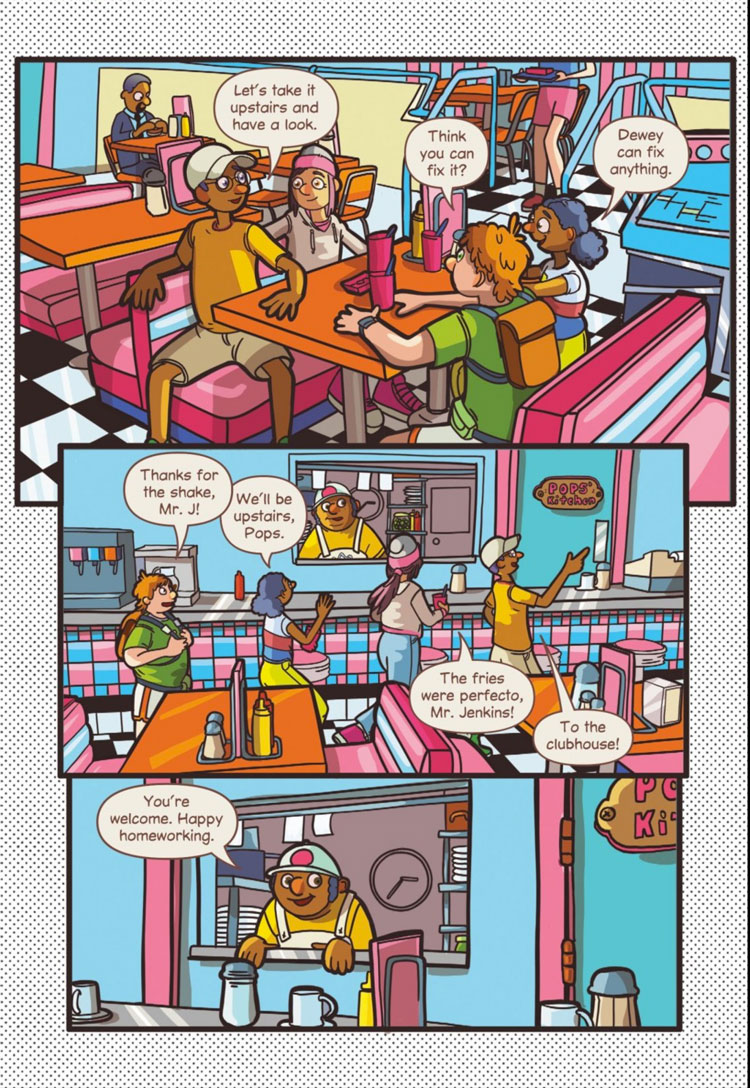 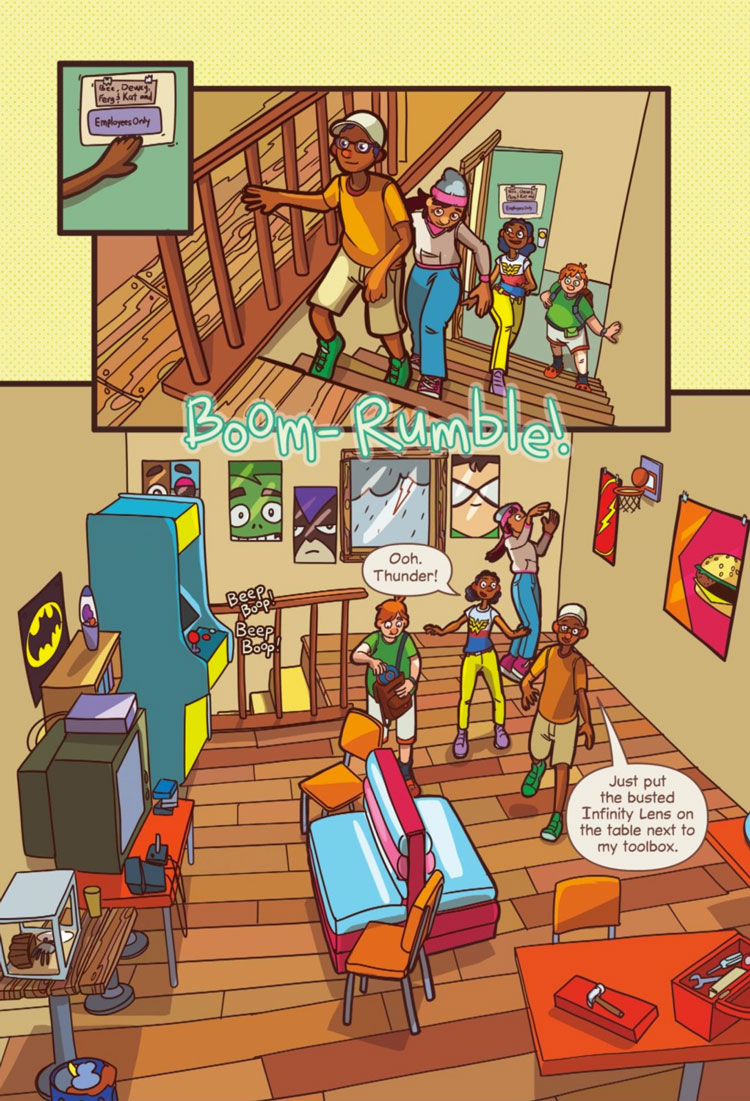 When I started My Video Game Ate My Homework, it seemed as though it was going to be a lighthearted adolescent adventure. With three kids of color at the fore, I was excited for where it would lead.

Finishing, though? I was amazed at the heartfelt, deliberate, and sensitive messages surrounding the climax of the story. All of the characters are brought together by a sincerity that helps them support each other and find out how to adapt that support to their friends’ needs.

What really stood out to me was Dewey and his experience with dyslexia, central to the story, and how his processing of how it fits into his and his friends’ adventure. 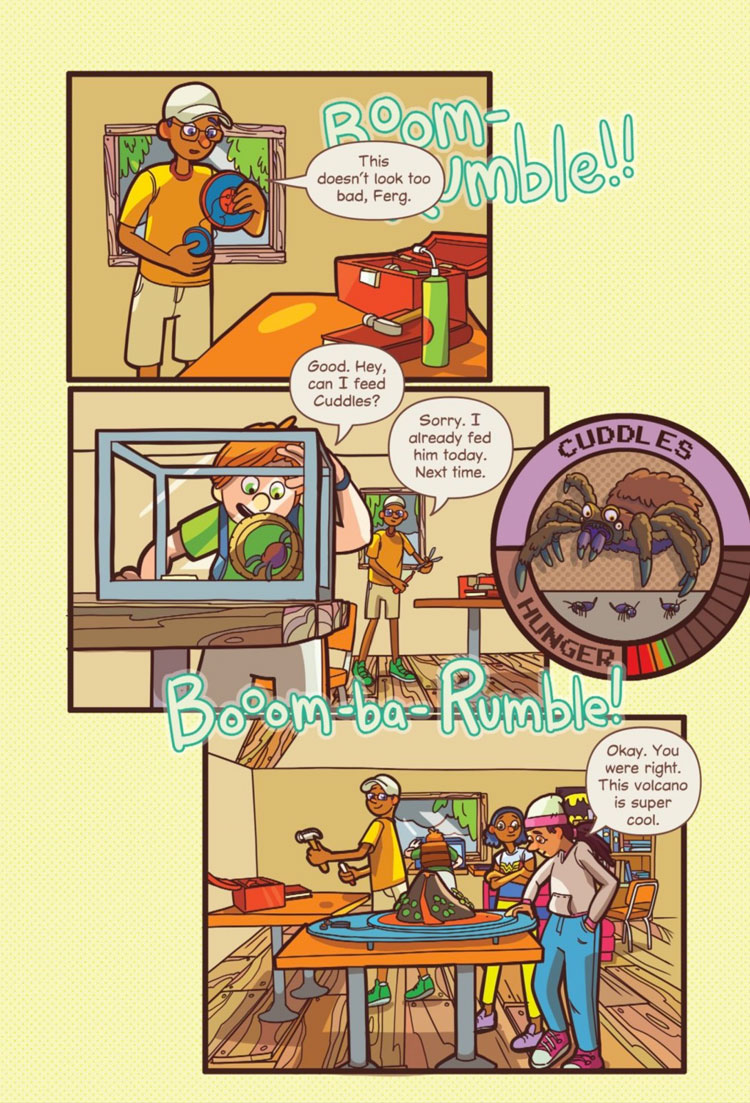 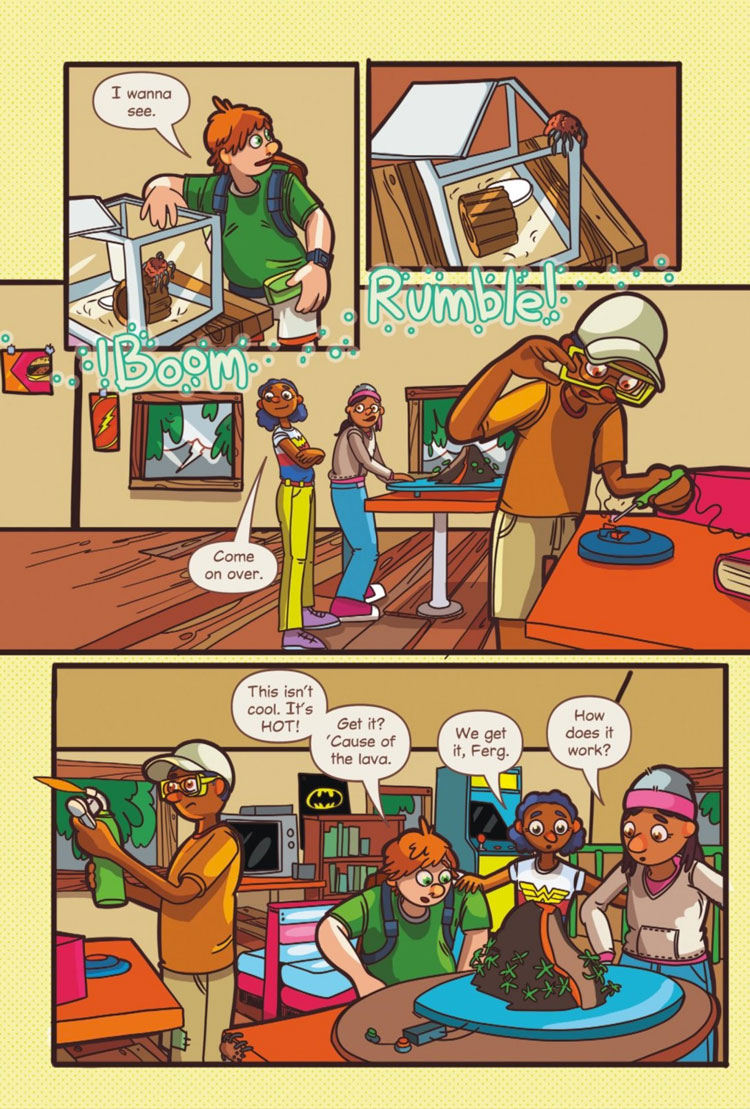 The context around dyslexia involves a few moving parts, and the International Dyslexia Association has a good breakdown:

About 13–14% of the school population nationwide has a handicapping condition that qualifies them for special education. Current studies indicate that one half of all the students who qualify for special education are classified as having a learning disability (LD) (6–7%).  About 85% of those students have a primary learning disability in reading and language processing.

Nevertheless, many more people—perhaps as many as 15–20% of the population as a whole—have some of the symptoms of dyslexia, including slow or inaccurate reading, poor spelling, poor writing, or mixing up similar words. Not all of these will qualify for special education, but they are likely to struggle with many aspects of academic learning and are likely to benefit from systematic, explicit, instruction in reading, writing, and language.

The multiple dimensions of language and reading inform many experiences of dyslexia, leading to a variety of manifestations. Whether through reading comprehension or written expression or other academic behaviors, people with dyslexia often experience difficulty in school, similar to what Dewey intimates throughout MVGAMH. 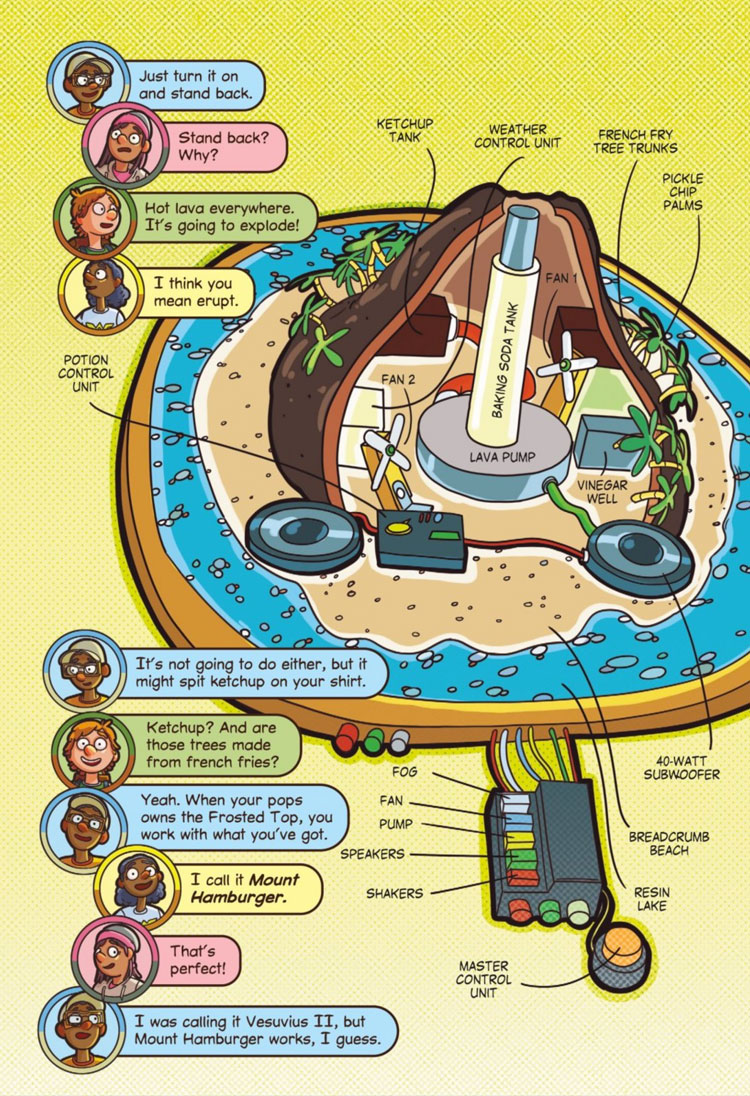 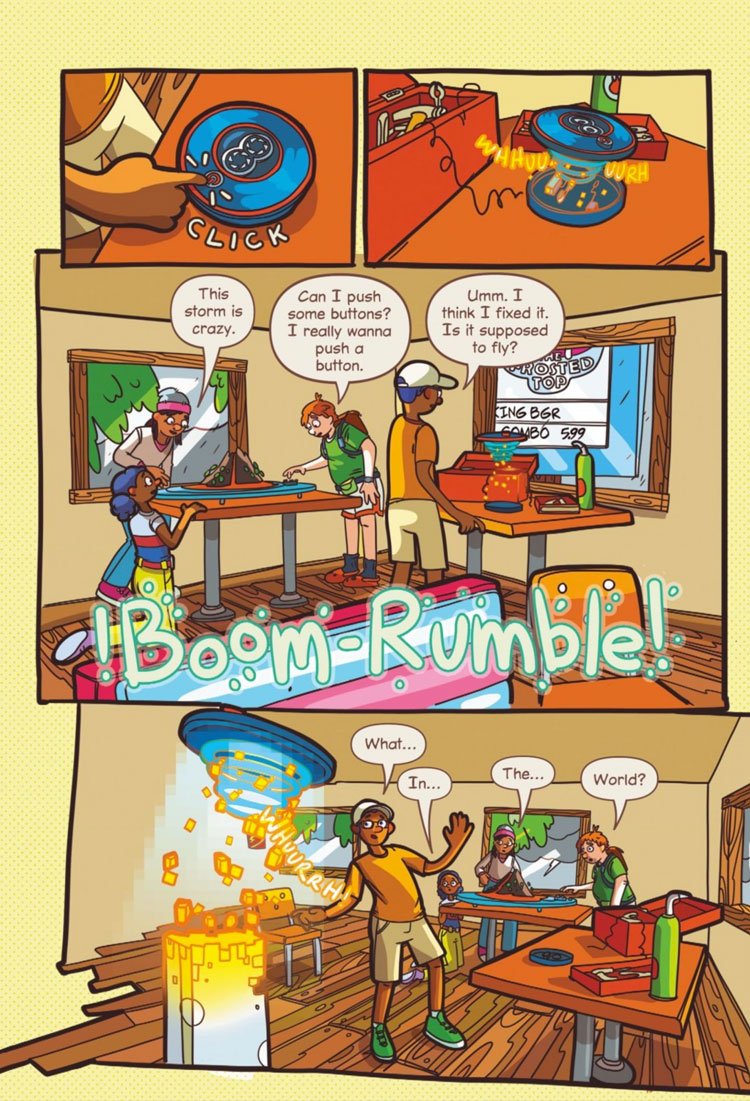 Because of these challenges, students, especially young children, may experience significant levels of stress or anxiety, which can be exacerbated by or lead to social issues as well. Such a paradigm means that people with dyslexia often need support tailored to their needs, though, as we see with Dewey, that is not always easy to come by.

My background is in counseling and mental health, and through my education and professional career, I’ve often encountered information regarding learning disabilities like dyslexia in a couple of ways: through learning about mental health symptomology commonly experienced by those with dyslexia and by learning how students of color are often undiagnosed with learning disabilities, including dyslexia, and are more likely to be harshly disciplined rather than given support. Both of these ideas are central to how I read MVGAMH. A young boy of color as a protagonist with dyslexia is helpful representation for a number of reasons, let alone how the story works out for him.

Dewey also indicates how having a learning disability never precludes anyone from being talented somewhere else. 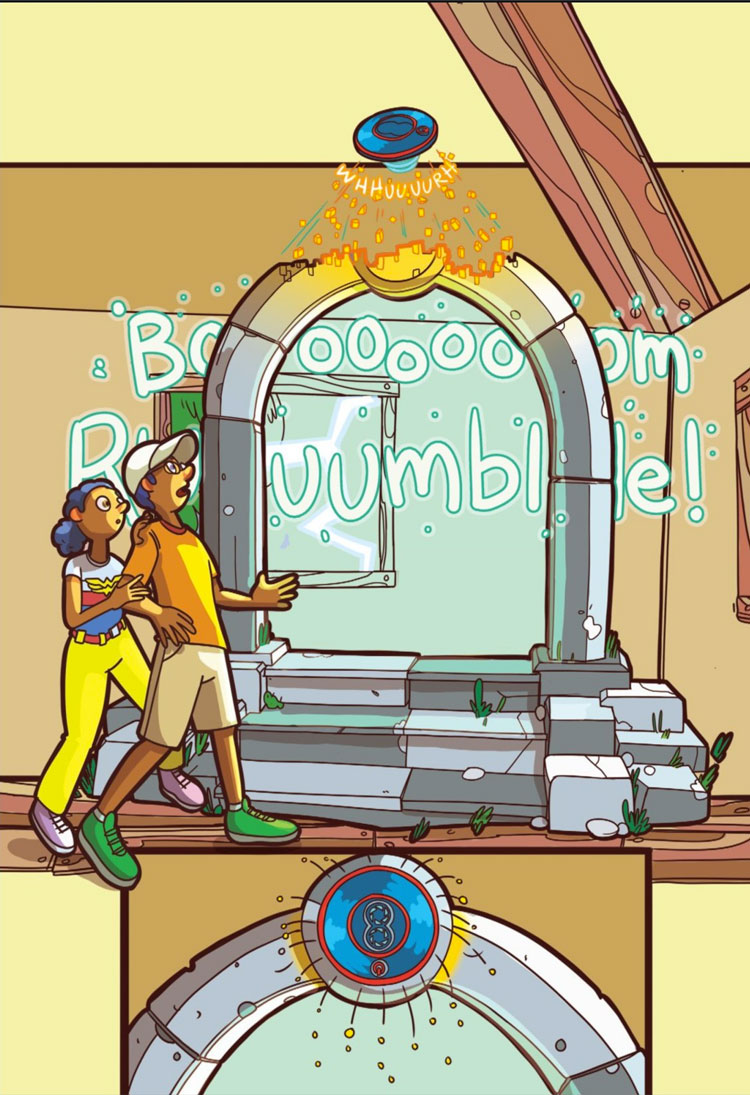 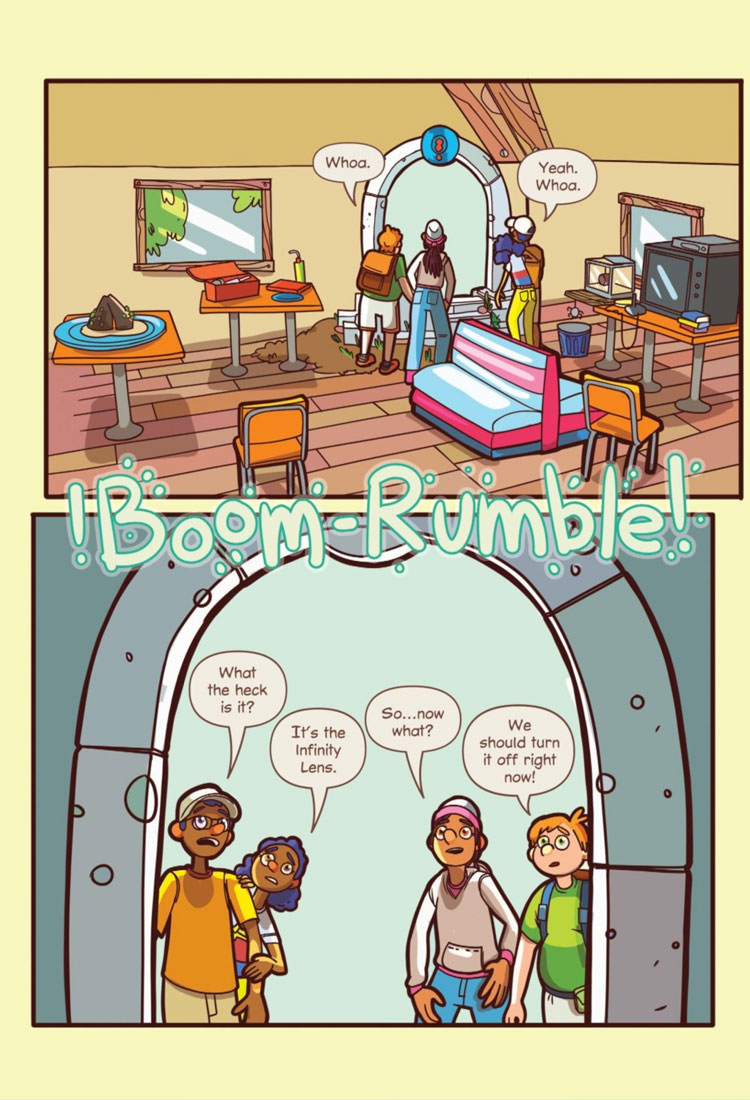 As the International Dyslexia Association states, “Dyslexia occurs in people of all backgrounds and intellectual levels. People with dyslexia can be very bright. They are often capable or even gifted in areas such as art, computer science, design, drama, electronics, math, mechanics, music, physics, sales, and sports.” The thing about intelligence is that there’s so many domains that it’s hard to pin down what an absolute intelligence is. Instead, using a framework akin to Gardner’s Theory of Multiple Intelligences, we can see that while we may have challenges in some areas, we are often gifted in others.

When it comes to school, difficulties with academics are not easy to hide, and the layered challenges can make experiencing these difficulties hard to navigate. Kids of color in particular face disproportionate challenges, as many people may simultaneously punish them for having a learning disability while also disparaging their talents, leading to the dire educational experiences often encountered by kids of color throughout all educational systems. Without highlighting these talents, potentially offering a font of strength to draw from, many students may end up feeling as though they are lost, and that help or support may not come.

For Dewey, though, we get to see what a happier ending could look like. 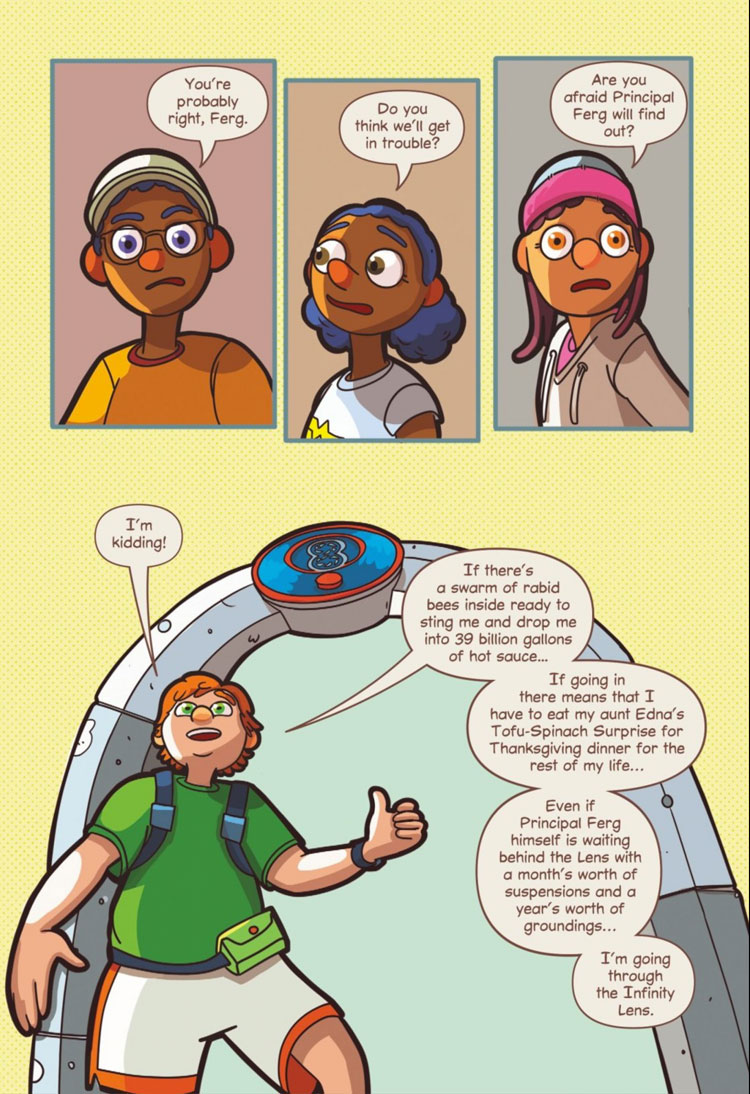 Through the tools he finds, including a sentient book, Dewey is able to uncover a strategy to help him decipher an important message. The parallel isn’t 1:1, but this development for him mirrors what effective, prompt, and affirming treatment can do for many people with dyslexia. According to the Yale Center for Dyslexia and Creativity, early intervention can help parents identify what needs their children may have, with guidance offered here.

Early intervention, though, is not always easy. As we see with many kids and families of color, there can also exist barriers that make it hard to implement various levels of support, including manifestations of systemic racism in education like punishing kids of color for difficulties with reading rather than offering the same supports that are given to their white peers.

Dewey not only finding a strategy that is beneficial for him regarding his experience with dyslexia, but also being a talented engineer, is a helpful representation of possibility for many kids with dyslexia. Opening the door for someone to see themselves as multifaceted and thus capable of feats independent of challenges, or sometimes revealed through them, can be a valuable tool for enhancing kids’ self-efficacy when it comes to experiencing dyslexia.

The confidence and accomplishment from talents can be used to support confidence regarding challenges with dyslexia. It is not so much a transference as a reflective process, allowing and helping someone to see that the same capabilities they have to master their talents can relate to how they can find useful strategies for having dyslexia. 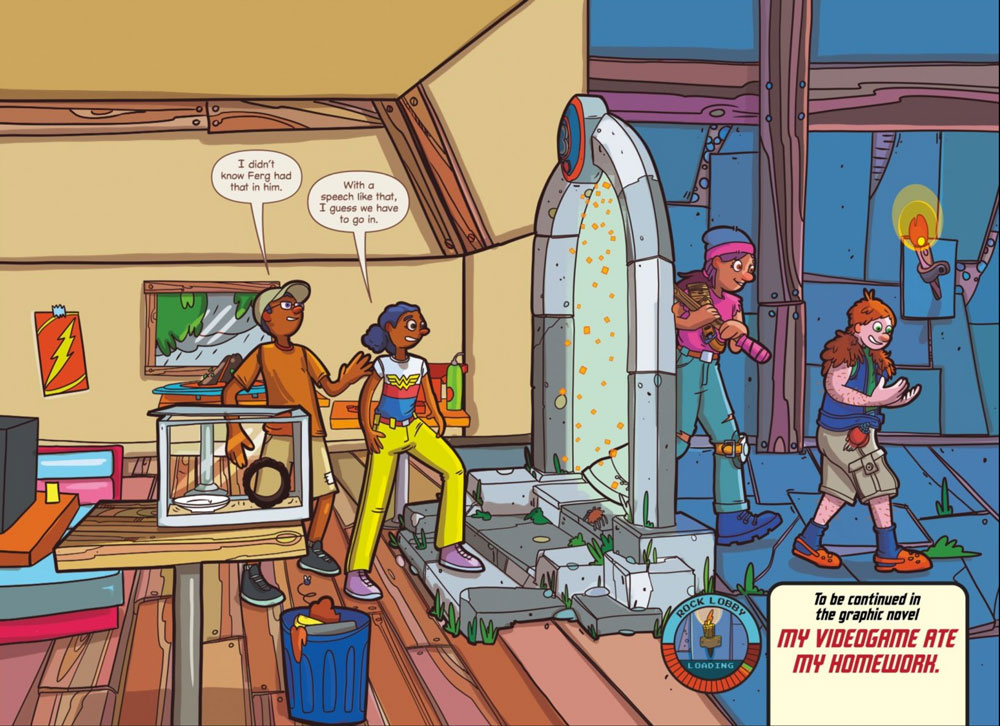 Being able to see yourself in a story is one thing, and representation is still a pretty low bar. So, that is why I appreciate what is likely my favorite moment of MVGAMH: Bee attempting to ‘help’ Dewey, for him to respond by telling her that it is not quite the help she thinks. Two siblings of color navigating the difficulty of asking for help, setting boundaries, and developing autonomy with each other is beautiful in its own right, and this moment is when Dewey begins to set the terms for how he interacts with the world. These conversations are not easy to craft or to have, and Hansen gives us time to unpack it for ourselves as they twins do through each panel. This moment was a great way for Dewey to experience power, and I am grateful that such an intimate moment was treated with care.

Any experience of dyslexia can be challenging, and kids and people of color with dyslexia and other learning disabilities still face significant barriers to accessing support. Reducing these barriers will need to involve systemic change, given that systemic issues often lead to the iterations of racism and white supremacy enacted against students of color. This reality is why I found it affirming to see the International Dyslexia Association issue a statement regarding mitigating racial disparities and violence that affect kids and people of color with dyslexia. My hope is that the organization continues work to dismantle the racism which leads to people of color with dyslexia not being diagnosed, as without doing so will only continue to exacerbate the challenges faced by people with those experiences. Just as Dewey found a way to work with his dyslexia on his and his friends’ adventure, so do people deserve equitable access to treatment, intervention, and support.

I walk away from My Video Game Ate My Homework fondly. I’m no stranger to comics, and lighthearted kid stuff is well within the range of what I enjoy. This comic is that and more. The playful interactions of the characters, the prominence of kids of color, a boy of color experiencing dyslexia, and sentimental exchanges are all part of what makes this comic so enjoyable. I can see the value of the story through each page, and it offered me some helpful reminders, even if I may not share some of the core experiences expressed through the comic.

For more information about dyslexia and facets of experiencing it, you can visit the International Dyslexia Association website here. There is unfortunately a dearth of literature and resources on children of color with dyslexia, though there are organizations like the Dyslexia Alliance for Black Children which recognize this limitation and how lack of access to support is not only created but used to bolster the school to prison pipeline.