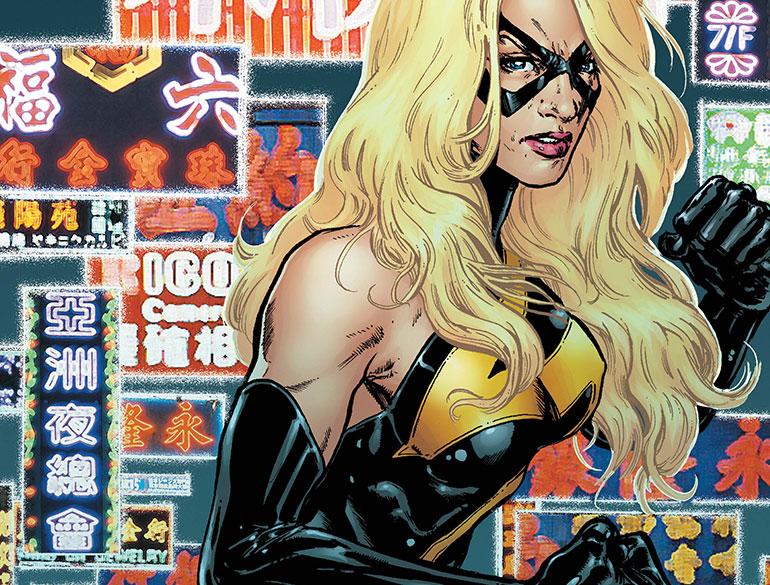 With Captain Marvel hitting the silver screen, I’m beside myself with happiness — though there’s something about her that’s been in the back of my mind for a while.

Carol’s relationship with substance abuse and recovery has always been huge to me. She stands as an example of what it takes to challenge that kind of experience, but also the limitations with which we view the concept of addiction. That being said, I figured it’d be worthwhile to discuss Carol and the context of recovery she exists in, as well as how that could look different for us and our varying dimensions of health and identity. 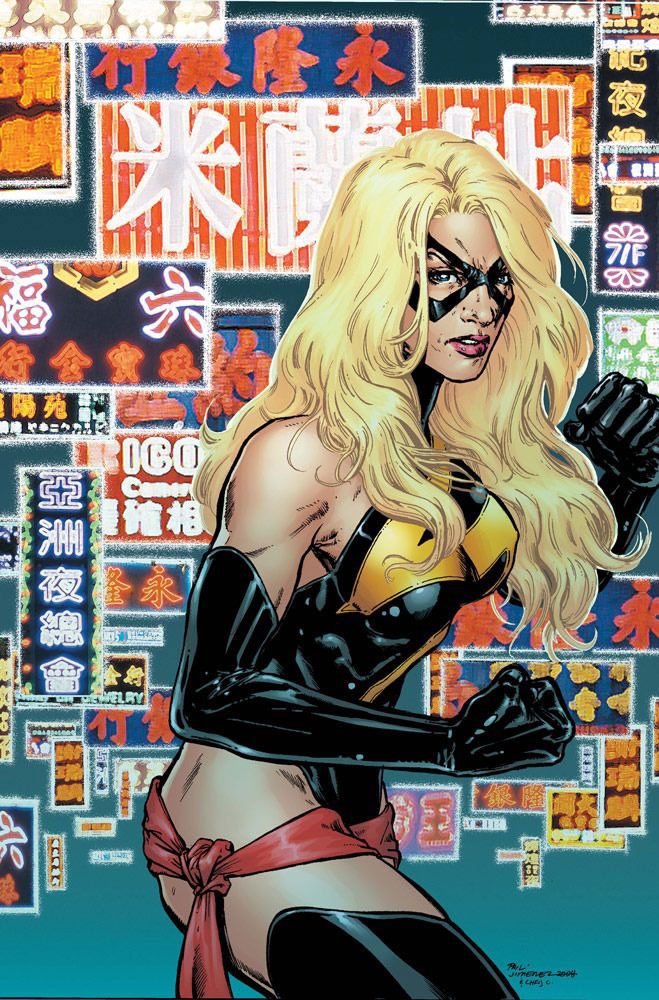 From her introduction in 1968’s Marvel Super-Heroes #13, Carol has been through the ringer. Her sexual assault in Avengers #200, as well Rogue’s attack in Avengers Annual #10, were major bookmarks in Carol’s history, leading to her travels with the X-Men and subsequent transformation into Binary as a result of Brood experimentation. All of these events are monumental in her eventual development into Captain Marvel (the exploits of Scarlet Witch in creation of the House of M universe notwithstanding). While they are major events, they all feel as though they come at the expense of Carol herself.

So, the development of not just her heroism, but her issues with alcohol as first documented in Kurt Busiek and George Perez’s Avengers, ended up coming from a predictable trajectory.

Substance use disorders (SUDs), a classification used in healthcare to denote pathological use and reliance upon various substances, have a wide range of origins. Our culture, unfortunately does not always see this reality, instead choosing to unnecessarily stigmatize people who have these experiences.

Our language around SUDs is skewed, evident in statements like “Once an addict, always an addict” or “addiction is a choice.” This all-or-nothing, absolute approach to substance abuse or dependence may be one of the keys in their persistence, the language around them creating a prison that many may not feel there is an escape from. All of these ideas belie the fact that SUDs are typically nothing that anyone chooses, just like the experiences which may lead to it.

Like Carol, people face all sorts of trauma at all sorts of ages. In fact, the expectation that infants to adolescents have never experienced anything “hard,” is completely erroneous, considering the fact by the time many people become legal adults, they have had a variety of experiences which challenge them in a way they may not be prepared for, whether emotionally, physically, cognitively, or any permutation of these encompassing areas of our lives. 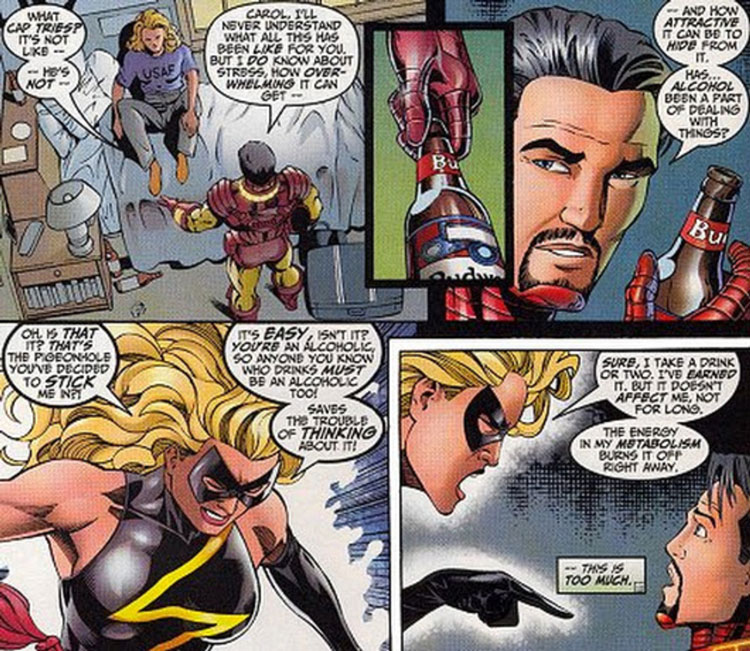 To some degree, addressing substance use and inheritability is important, because research has indicated a connection between propensity for developing pathological use of substances and a history of these behaviors in relatives. However, this is only one of many factors that influence the development of substance abuse or dependence. Grief, loss, trauma, assault, interpersonal deprivation, and a host of other environmental elements can play a role in someone developing a substance related disorder.

According to the 2017 National Survey on Drug Use and Health (NSDUH), an estimated 19.7 million people who were 12 or older met the criteria for SUD in 2017, and “an estimated 20.7 million people aged 12 or older needed substance use treatment”. Of the estimated number of people who needed treatment, about 12 percent of them (roughly 2.5 million people) received it at a specialty facility (hospital, rehabilitation center, or mental health center) . While we may not know who received treatment outside of specialty facilities (which may include emergency rooms, private clinicians, etc.), these numbers are the foundation of the context around substance abuse or dependence.

So, why would someone not seek treatment? Well, according to this same data from NSDUH, there are a lot of reasons. Of the respondents, many indicated a fear of negative impact on their social life or employment, while others could not afford treatment or were not ready to stop using substances. This is not an exhaustive list of reasons, and all of them are valid. Treatment is never a one and done process, and depending on who you are, there are risks, including the process of seeking help itself. 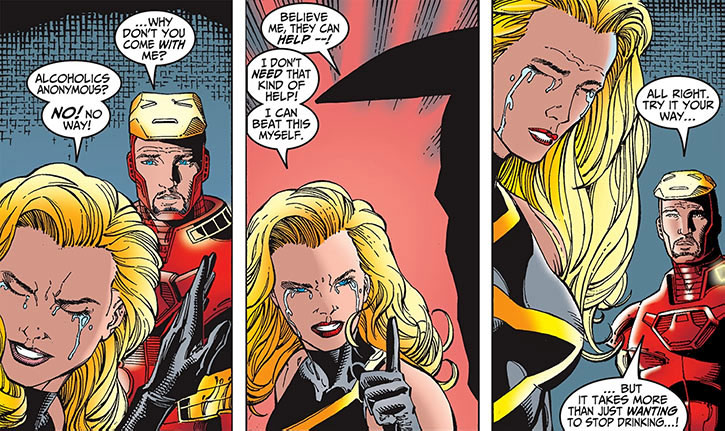 Carol matters because she is someone who faced these similar experiences: development of stressors and the exacerbation of her substance use. While her alcohol use is one chapter of the story that leads to the present, it was major because it lead to a significant catastrophe and her leaving active duty with the Avengers. After a string of significant losses, alcohol became something that likely helped to soothe intense emotions for Carol, but at the cost of other important parts of her life.

Yet, Carol rose up. Like the vital scene from the Captain Marvel film, we see Carol rise from the dirt. She stood against gendered expectations of behavior in her childhood, against misogynistic jeering from men in basic training, against suggestive and disparaging comments as she became a pilot. We don’t see a burgeoning alcohol problem in the movie, but we do see Carol continue to get up, much like she does in the comics. Combining these realities points to how Carol can be a symbol of change and defying odds.

Her ability to face insurmountable obstacles is what makes Carol stand out to me. We don’t quite see how she recovered from alcohol abuse, but I can imagine it occurs similarly to how she dealt with the trauma of her loss of memories and powers. We constantly see Carol push herself and surround herself with support, even at times when she doesn’t want it. She works through her past to arrive at a point where she can own who she is and her potential. It’s these facets of her that could resonate with others as they deal with their own issues with substances, regardless of what they are and where those came from.

Though there are continued criticisms of groups like Alcoholics Anonymous, the adage of “One day at a time,” seems to hold true for Carol, too. Her own motto, coined by Kelly Sue DeConnick in Carol’s taking of the Captain mantel, fits within this idea, which expresses the capability for change even as you take things at a slower pace. Through continual reflection, people are able to go higher or further or faster with a new understanding of how substances affect their lives. 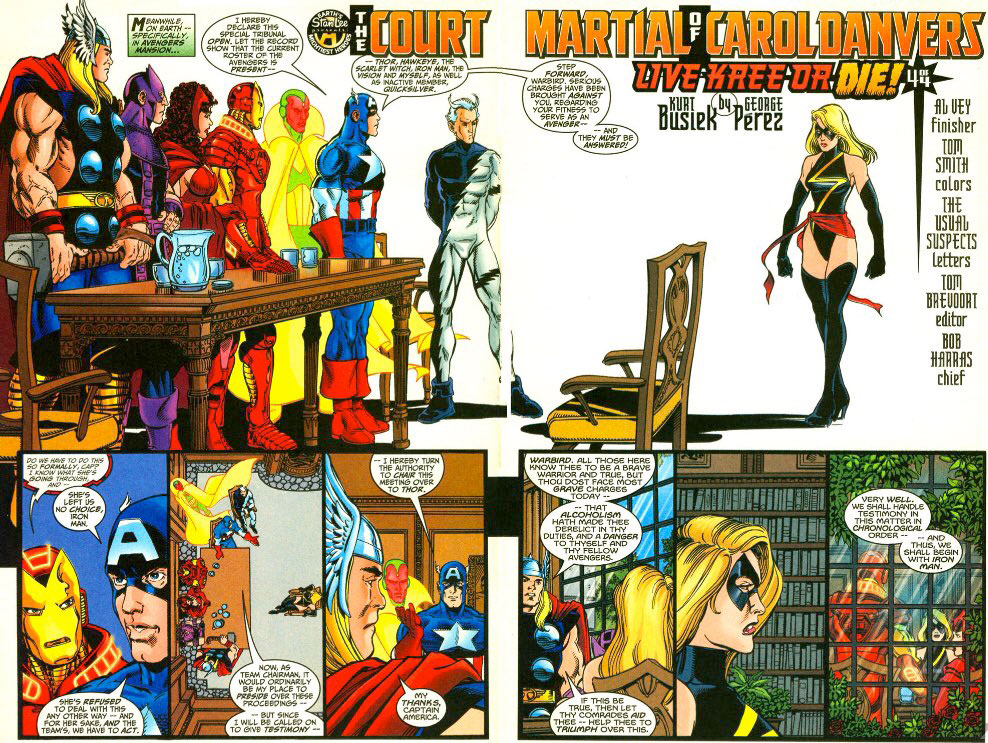 Carol’s experience as a cis woman is important for contextualizing substance abuse and dependence. On the whole, cis women indicate reduced rates of substance use compared to cis men, though other factors influence prognosis and treatment. The National Institute for Drug Abuse points out that clinicians may be less likely to ask cis women about substance use compared to cis men, potentially reducing the number of cis women we actually know about with substance issues.

The experience of wage inequality and gendered violence can also impact rates of substance use, abuse, or dependence. Carol’s agency in overcoming her substance abuse can be a point of connection for many cis women, considering issues with treatment, screening, and other issues which may exacerbate the problem.

However, as with everything, there may not be a universal meaning or application. Carol in particular does not just represent beating challenges, but also the people who get more resources or chances to do so. White people may use illicit drugs at a higher rate than people of color, but are less likely to be incarcerated for it. 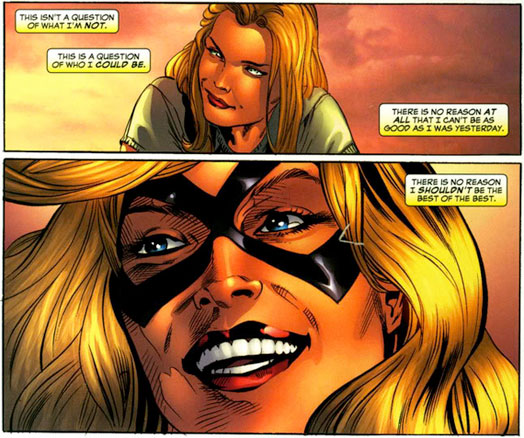 The Affordable Care Act helped to reduce disparities in coverage between white people and people of color, but the Trump Administration wasted no time in beginning to reverse some of these more positive changes. Combine these factors with rates of median income, which traditionally have and continue to indicate significant gaps in earning based on race, we see a less just picture for people of color than we may see for Carol. On top of each of these other issues is the experience of racial stressors, from microaggressions to physical violence, which can be yet another environmental influence on the development or maintenance of SUDs for people of color.

When looking at the trans and queer community with regards to SUDs, there is a paucity of data. Various researchers have found higher rates of substance use for LGBTQ people compared to their cisgender heterosexual peers. While some people find it easy to pathologize trans and queer people based on these sorts of statistics, they forget that these rates of substance use may exist as such because of experiences of environmental stress, namely in the form of active marginalization, like experiencing microaggressions or active physical violence.

Another major challenge in collecting this sort of data is that sexual orientation may be considered with less variance or nuance, and much research regarding health behaviors for trans and non-binary people remains woefully under- or ineffectively studied, causing further problems with how we understand substance use, disorders or otherwise, as well as why it occurs for LGBTQ people. 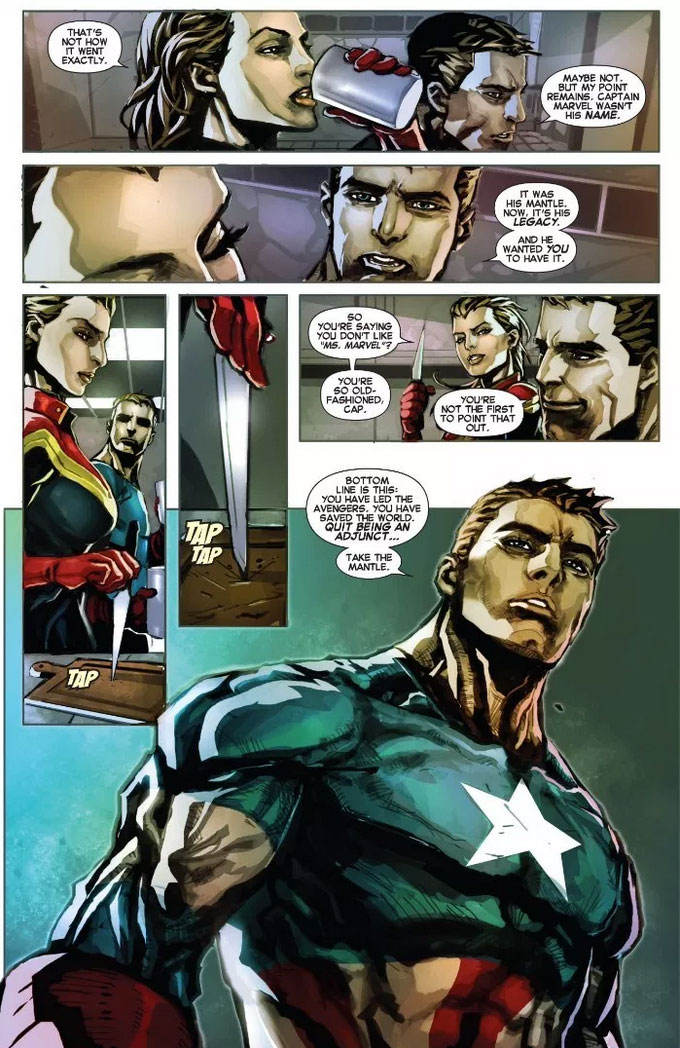 There is no way to discuss treatment and substance abuse without addressing issues of class. Having the resources and access to go to rehab is no small feat. This form of treatment is often expensive and requires time away from work, a privilege not afforded to many. The process of detoxing, or becoming accustomed to having less of a substance in one’s body, can be harrowing, to the point where going cold turkey can lead to a wide array of complications from nausea and high blood pressure to tremors and seizures.

People experiencing withdrawal are advised to seek medical attention and care when doing so, but not everyone can afford a trip to the doctor to make sure that everything goes as planned. Carol represents access in many ways, including connections to healthcare professionals or systems, in manners which may not reflect the reality that many people face in their accompanying healthcare systems, if there is one in place for them, efficiency be damned.

When we look at Carol, it may not be enough to see that she has made it through different fires. Especially when it comes to something as heavily stigmatized as substance abuse or dependence, Carol may just represent how chances are granted to people based on their identity. Bias against race, gender, sexual orientation, class, or ability can intersect in the simple process of screening, seeing someone from a marginalized group as indicating more “severe” signs of substance abuse and either directing them toward unnecessarily intensive or expensive treatment, or denying treatment due to the perception that it “won’t take.” 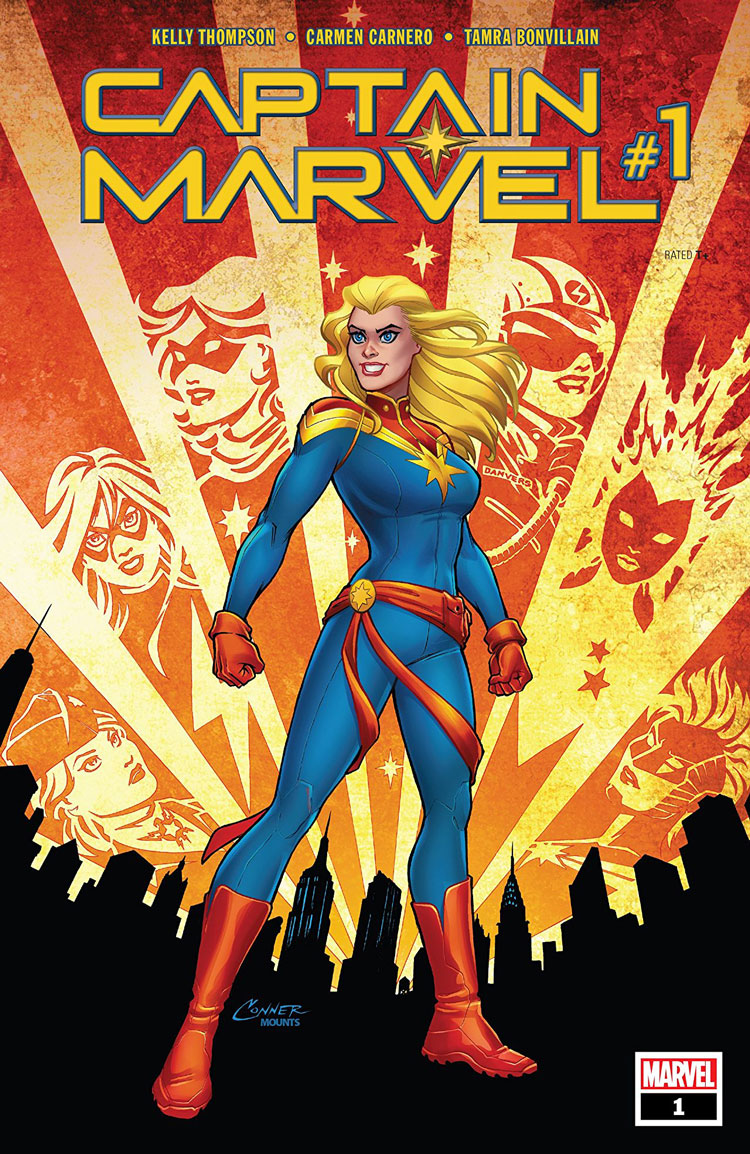 From each of these standpoints, Carol can represent triumph or the system itself, one which was not made to help everyone. Having someone make it through an experience as influential as substance abuse is huge, considering the reporting, measurement, and tracking of success is often dubious at best.

Still, we have to consider that cis white people get to triumph a lot in fiction, while everyone else doesn’t always see that. Intersecting other identities with Carol’s to better understand the nuances of systemic impact adds to this conundrum, forcing us to see the reality of SUDs and why they occur or persist in different communities.

So, through Carol, we see the power of a breakthrough and what it’s like to arrive on the other side. Yet, we also see that, were she to live in our world and not the 616, MCU, or otherwise, she may have a different chance for recovery that can seem or be nigh impossible for those who don’t look for feel like her.