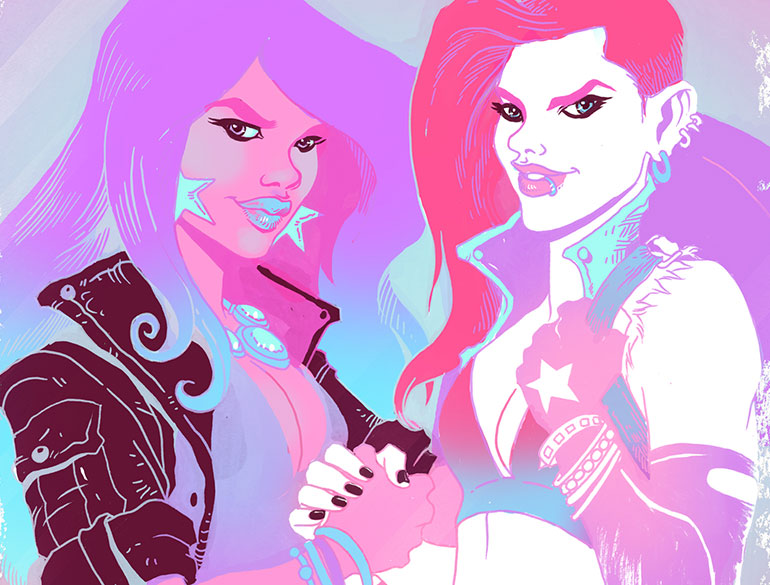 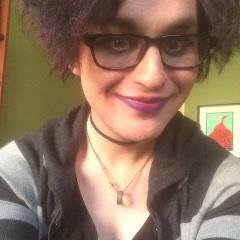 Magdalene Visaggio is one of those people who has changed the way readers have looked at the world and and their perspective on representation, being an ally verse shouting at the wind, and the amount of work and love creators put into comics. She takes literary, religious and cultural influences so personally and feels them very deeply. These last few months she has taken the comics industry by storm with her Black Mask Studios project Kim & Kim, created with artist Eva Cabrera and colorist Claudia Aguirre. This is a comic that represents all her loves: action, science-fiction adventure, and queer characters. While she’s talked a lot about Kim & Kim the last few months, I wanted to ask Mags about the comics and influences that drive her and share it with Comicosity readers.

Magdalene Visaggio: Oh geez. I don’t know! I’ve been reading comics pretty much my whole life, and making them in one form or another just as long, it’s kind of my natural medium, so that’s like asking what my favorite aspect of air or gravity is.

Thinking about it, I really like the comic page. It’s a whole little narrative unit that stands on its own as much as it contributes to the rest of the book, and there’s not really any other medium that does that. So that makes it pretty unique, and it creates all these little fancy storytelling opportunities; every comic is twenty-two little stories.

MV: Collaboration! I love working in a team (especially when I am the one in charge, mwa ha ha ha), and seeing what everyone brings to the table. The book never ends up being exactly what I had in mind, and always ends up better for it. That might be because I’m a bad writer, but I suspect it’s because comics is all about the whole being greater than the sum of its parts.

I love to talk about comics as like being in a band, and that’s absolutely true. The energy that derives from a really great collaboration is unlike anything else.

MV: I’m not really sure. The things Kim & Kim gets compared to the most, like Tank Girl and Dirty Pair, aren’t things I’ve really read, and the things I’d be the most inclined to cite as favorites — Sandman, Powers, Spider-Girl, Marvels, Kingdom Come, Red Son, Persepolis, Transmet, The Wicket + The Divine — aren’t really showing up in my work.

The books that I return to most often for storytelling help (and I’m going to be citing writers here) are She-Hulk by Charles Soule, Daredevil by Mark Waid, Silver Surfer by Dan Slott, Wonder Woman by Brian Azzarello, and yeah, The Wicked + The Divine by Kieron Gillen. I hover around these books a ton for a bunch of different reasons, but they’re the ones I try to look at structurally or thematically or whatever.

In terms of content and whatever? I referenced Curb Stomp by Ryan Ferrier a lot in developing Kim & Kim, and its marks are on my upcoming book Quantum Teens Are Go, too, but honestly? I’m not really sure. There’s def[inately] some Scott Pilgrim in there.
As for favorite protagonists? Huh. I’m all about me some Superman. Love She-Hulk. Nightcrawler. Squirrel Girl. It’s hard to name people because I know I’m forgetting.

MV: Unless I’ve got deadlines coming up, I am super fucking lazy. And since I have a day job, when I am working it’s usually in evening snippets after dinner. The only really regular thing is that I try to get my scripting done in a single marathon session, and when I do that, I can hammer out twenty-four pages in a day. There’s not a lot that’s, like, super consistent in how I work. I review layouts when I get ‘em, I proof letters when I get ‘em, et cetera et cetera.

MV: Quiet. Anything else totally throws me off.

JB: What is your favorite representation of humanity in comics?

MV: Oh geeeeeeeez. Let me be like really basic here and say Sandman. It’s an easy sell; the sweep of the story is massive and it totally encompasses, like, everything. So I’ll make myself drill down, yeah?

Hob Gadling. Hob is a 13th century Englishman who just decides not to die, and ends up living for the next several hundred years as a sometime drinking companion of Dream of the Endless. His story — especially his last story — are phenomenal reflections on how people change and grow over time, even while the backdrop of his lives remains maddeningly consistent; the last page, set in the 1980s, is a deliberate echo of the first, set five-hundred years earlier. Nothing has changed but Hob and the window dressing.

MV: Can I say Kim & Kim? Honestly, the answer is probably my next book, Quantum Teens Are Go. I love my baby Kims, but QTAG is, in addition to being a much more structured story, is a lot less aspirational and feels a lot more human to me. 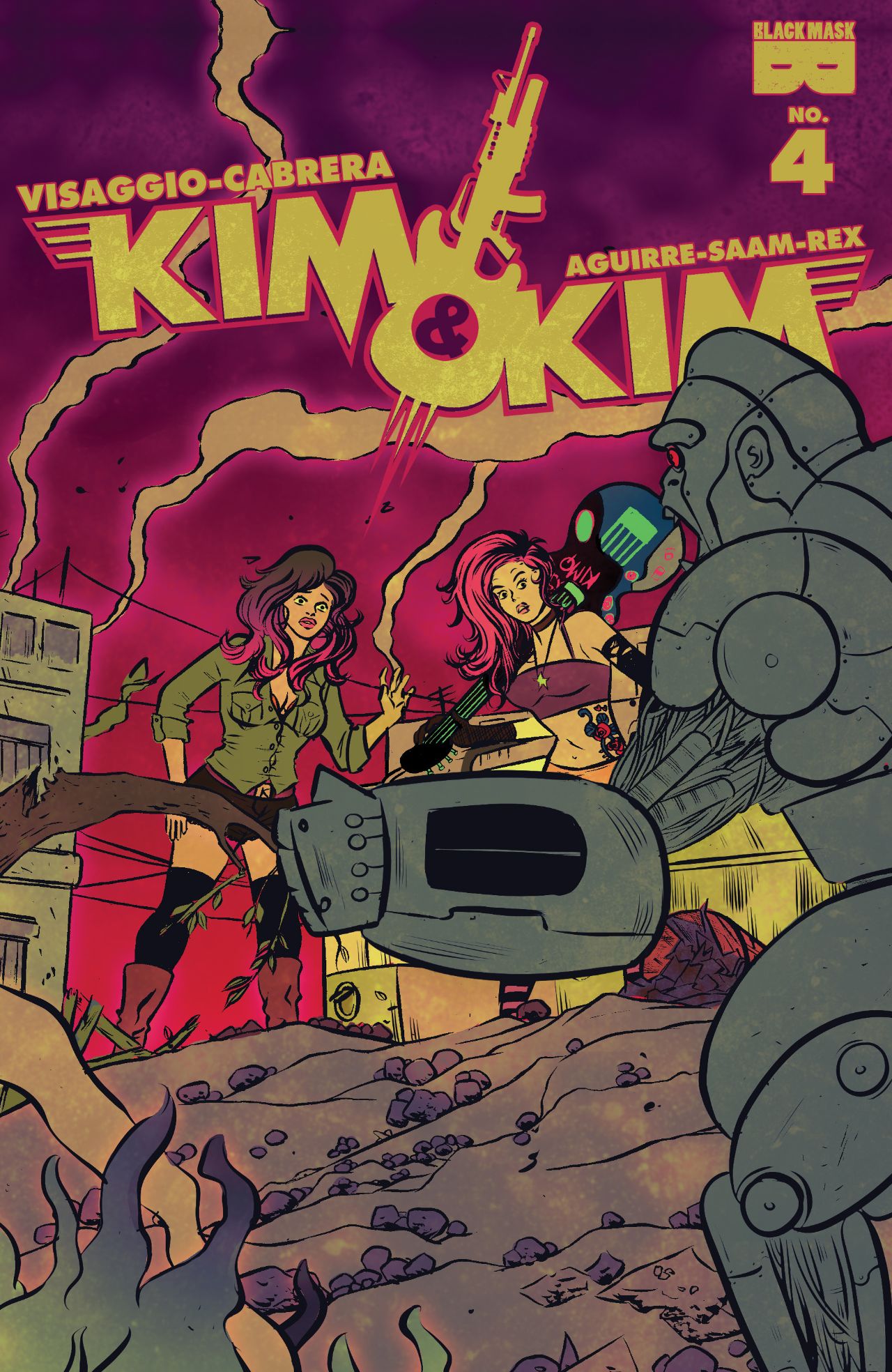 MV: I haven’t been doing this long enough for anything to change but for the end of the #makecomics hashtag. But Twitter is where comics happens, and I tell anyone who wants to do this shit to jump in. The connections and friendships you make here are what fuel your career. They’re how you learn to get better at what you do. How you find collaborators. How you get introductions. How you lay all the groundwork that modern freelance comics demand.

MV: Comics will break your heart, kid. But don’t be afraid of them.

MV: I dunno. I don’t really have any statements to make. The stories I tell are stories that mean something to me. I hope they mean something to someone else, and I’m not gonna say what they should mean to everyone. Kim & Kim is about what being in my early twenties felt like to me. It didn’t feel like that to everyone, so others might not get the same experience from it. A lot of people are hanging on how it handles trans representation. That’s cool, too.

MV: …to put something out into the world someone finds meaningful. I mean, look, there’s a lot I want to accomplish. I’m big on improving LGBT rep. But that’s not my mission. It’s a thing I’m doing because I love this medium and I want it to be healthy and to be a force for good in people’s lives. But I got into comics because I want to make things and tell stories and have them not fall flat on the ground. If I can do a thing that makes people feel better about themselves, or makes them cry, or makes them angry, or makes them question something, or gives them ten minutes of good chuckles — that’s the point. That’s what I’m here to do.

You can also check out her free webcomic Sea of Clouds.