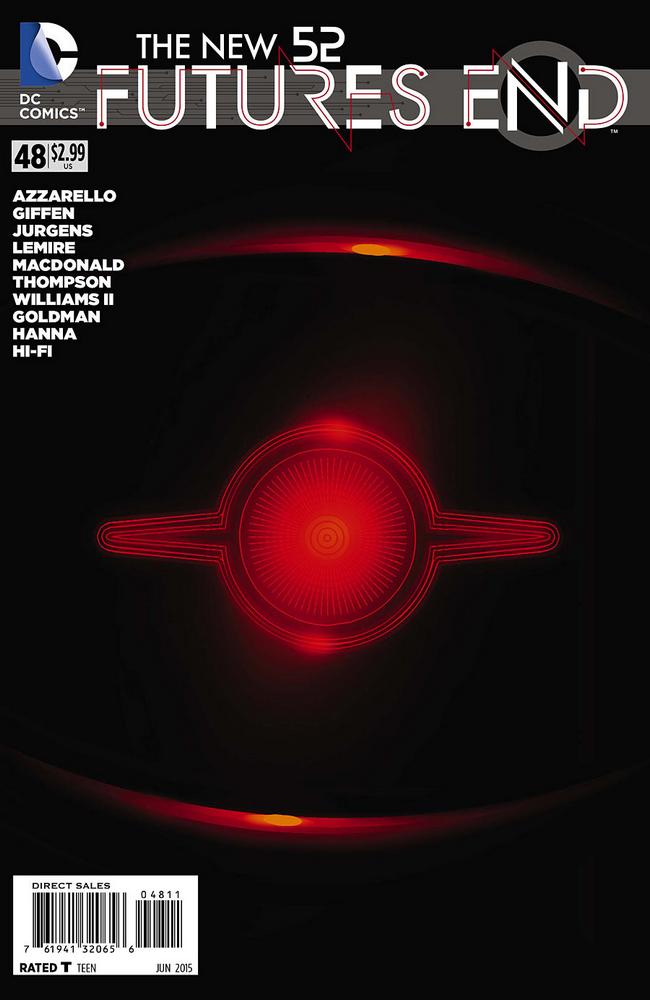 Welcome to Comicosity’s Hot Five. Hot Five is a short list of the top books we think you’ll want to be checking out. Be they new title launches, key issues or just continuing stories from some of the industry’s most acclaimed books, this list is your guaranteed gold in the comic market! Happy April everyone! Baseball season is here, the weather is warming up, and there are plenty of comics to read! 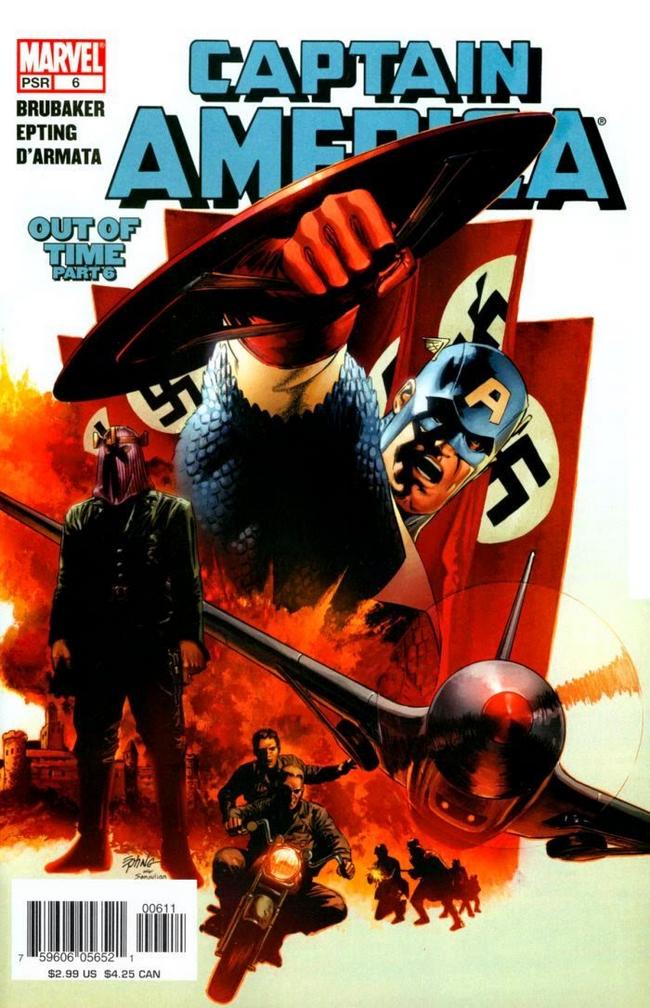 “OUT OF TIME” Finale

Who killed the Red Skull? Who is the mystery assassin we have yet to see? This issue answers those questions and more! The hunt for the killer of the Red Skull takes a bizarre turn and Steve Rogers’ life turns with it. Shattered fragments of Cap’s past are called into question by new memories that keep flooding his mind. Is someone playing mind games with him, or has he been in the dark about certain events for years? Only a trip to the scene of his most devastating failure will answer that question.

Why It’s Hot: Ed Brubaker and Steve Epting just might be onto something here, as the debut arc of their take on the Sentinel of Liberty has been nothing short of brilliant. How will it end? I have a feeling it’s going to be good, and will rewrite one of Marvel’s sacred unwritten rules (and no not reviving Uncle Ben, the other one!) 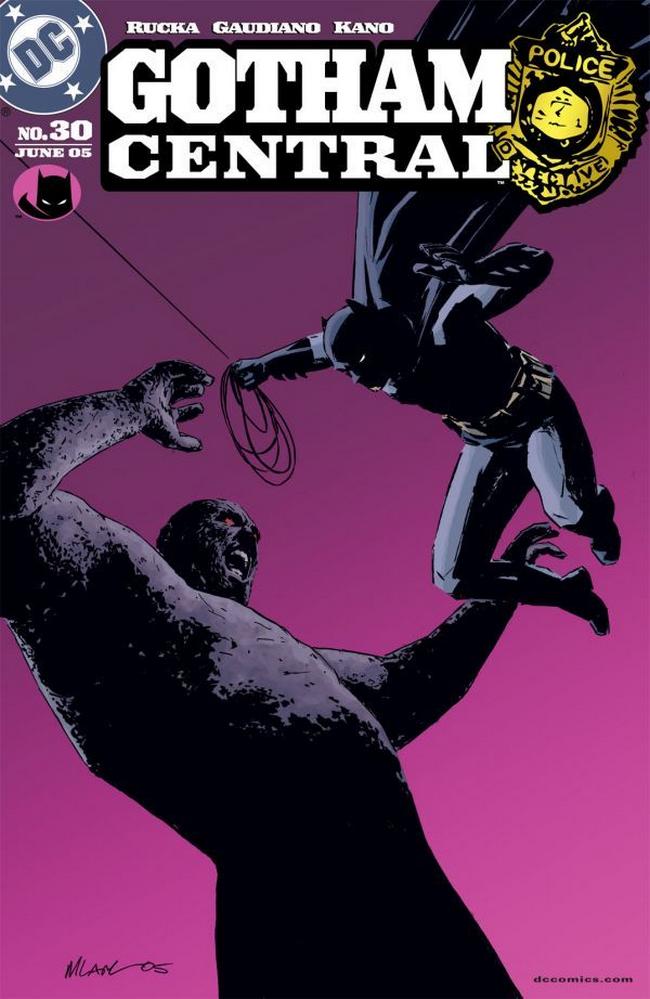 Allen and Montoya have traveled to Keystone City to save Officer Andrew Kelly, who’s been transformed into a terrible monster. But their efforts may be for naught, as Kelly continues to evolve into something increasingly horrific – and unstoppable.

Why It’s Hot: Gotham Central is one of the absolute best comics that DC Comics publishes, and you should all read it so it can last forever and ever. 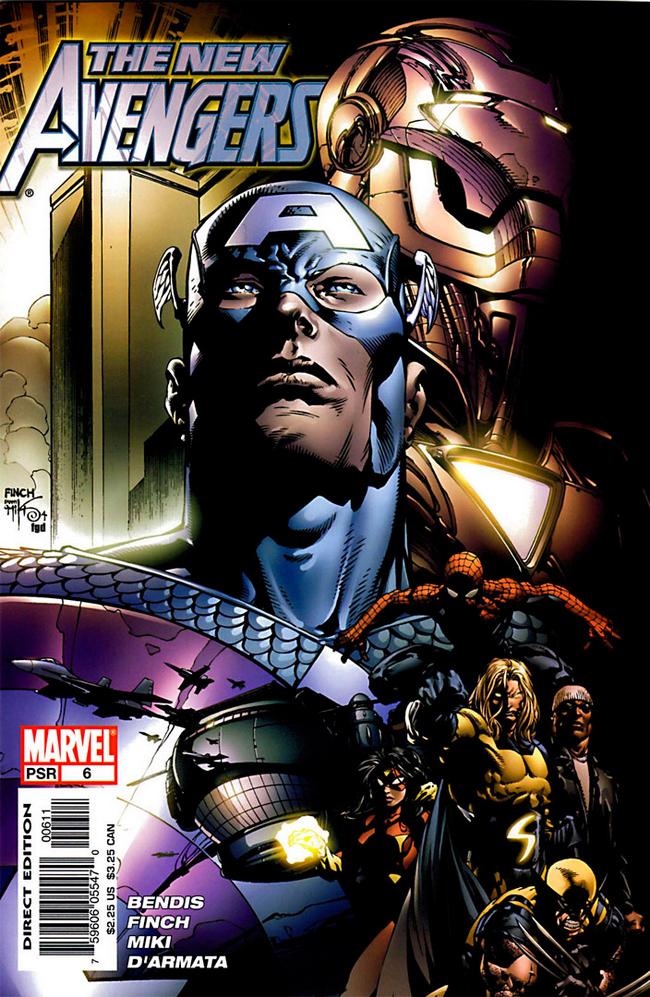 Hold on to your hats! Wall-to-wall action New Avengers-style. The New Avengers have gathered to avenge those affected by the wild events of the Breakout. But the questions revealed in this issue will have deep ramifications for the rest of the Marvel Universe.

Why It’s Hot: The ambitious new (no pun intended) direction for the Avengers franchise reaches the conclusion of its first arc. You think Spider-Man and Wolverine joining the Avengers is crazy? Well as they say, you ain’t seen nothin’ yet! 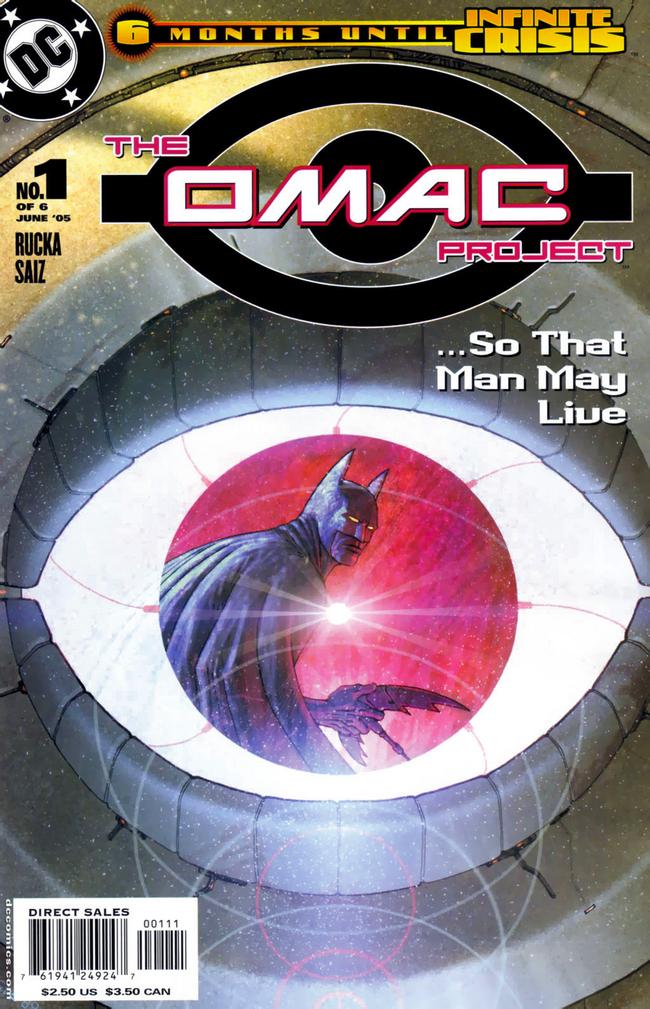 Spinning from the events of DC COUNTDOWN and IDENTITY CRISIS, a crackerjack thriller by Greg Rucka (ADVENTURES OF SUPERMAN, WONDER WOMAN) comes to life in the brooding, gorgeous art of Jesus Saiz (MANHUNTER) in a 6-issue miniseries featuring covers by Jose Ladronn that can’t be missed!

Every hero and villain in the DCU is under the gaze of an unbelievably powerful spy satellite. It’s a technological marvel that answers to only one person – and he’s got plans for it that are completely unknown to the superspy organization he controls: Checkmate!

In a world where men can fly and melt metal with their eyes, there’s now an army created specifically as an answer to them: a One Man Army Corps. Batman and an old ally are about to learn the chilling truth behind the OMAC Project – but will they work with or against each other?

Why It’s Hot: The road to Infinite Crisis kicks into high gear with Greg Rucka and Jesus Saiz’ mini series event! What is the secret behind The OMAC Project? What does it have to do with Batman? How will this lead to Infinite Crisis? The answers start here! 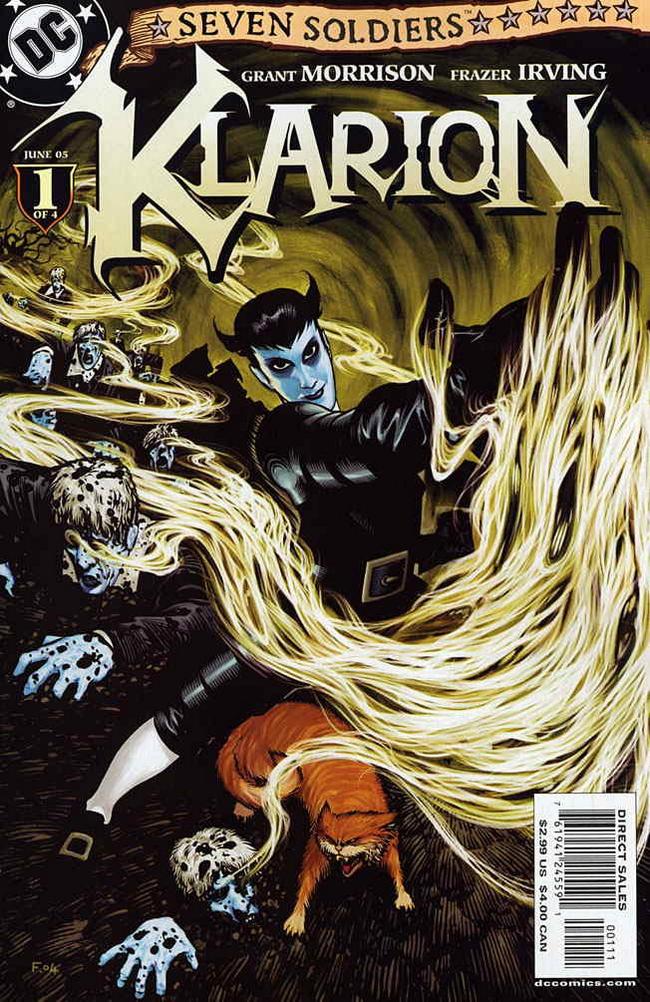 Grant Morrison is joined by artist Frazer Irving (Necronauts, THE AUTHORITY) for another amazing bimonthly 4-part miniseries in the SEVEN SOLDIERS saga!

Deep in the bowels of a subterranean city, young dissenter Klarion and his cat familiar Teekl have been hand-picked as potential recruits to the Submissionary Order, a group made up of brutal lawgivers who maintain order with the help of their familiars. But Klarion’s nature is to rebel against the powers-that-be, which isn’t a good idea in such a tightly controlled society – one in which people who don’t conform are swiftly judged and burned at the stake!

Why It’s Hot: The Seven Soldiers saga continues as the legendary Grant Morrison’s most ambitious project yet gets a little magical! Joined by Frazier Irving, and his moody, dark, awesome art, Seven Soldiers: Klarion The Witch Boy looks like another winner from DC!

*Oops my bad. These were all books from April 2005. Honest mistake guys and gals. I promise it won’t happen again. Wait!? These were from an entire DECADE ago!? I don’t think I’ve ever felt as old in my 28 years on this planet (Take a look at the date for this week… I couldn’t help myself) 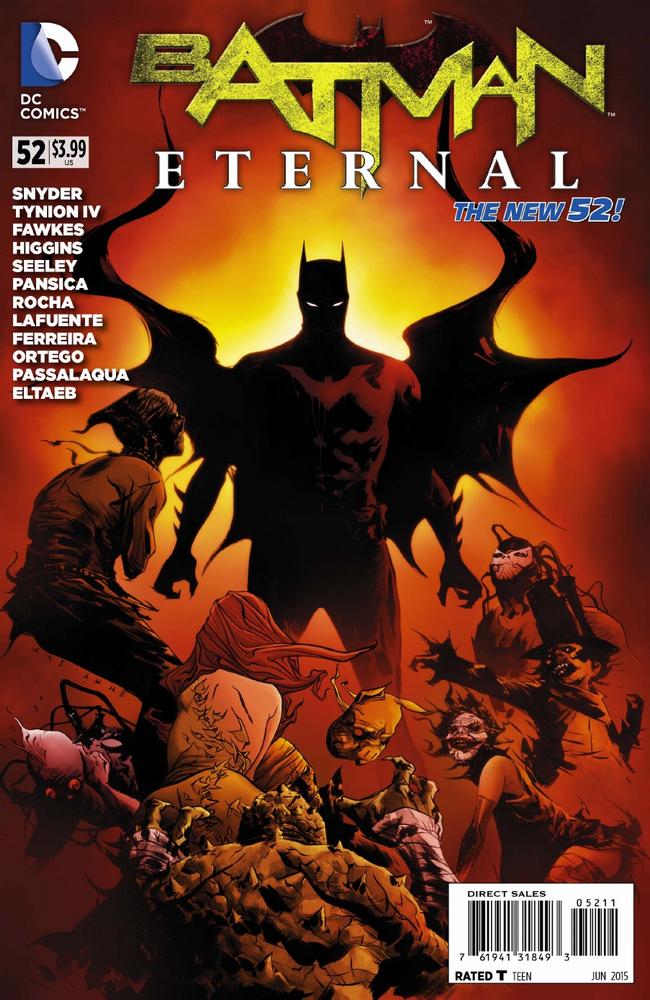 This month in BATMAN ETERNAL: The epic Bat-story over a year in the making comes to a stunning end! Gotham City is in flames! Villains are running wild in the streets! Bat-tech has been corrupted! And the mastermind behind it all has put a knife in Batman’s ribs! How will the Dark Knight put an end to this nightmare…and how will it shape the face of Gotham City to come?

Why It’s Hot: The year long Bat-Epic comes to an end. One of the better weekly comics of the recent era, Batman Eternal has seen quite a bit happen over the past 52 weeks. The introduction of Stephanie Brown, the unveiling of Harper Row as Bluebird, Selina Kyle becoming the Queen of Gotham City’s Organized Crime, and so much more. Can the creative team, consisting of some of the greatest minds in the business, stick the landing? I think there’s a good chance they do! 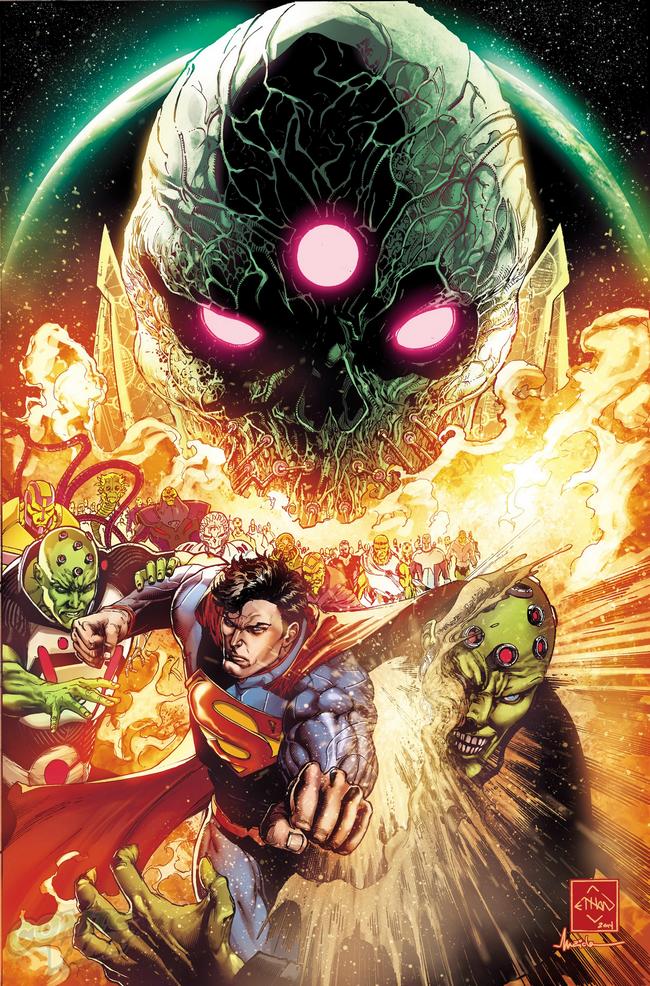 Where do worlds go when they die?

The Earthquakes felt round the Multiverse, Superman’s lost days after “Doomed,” the World’s End – all these points will converge as the history of the DCU is spun from a new perspective, the perspective of a mad god and his arrogant child. The biggest story in DC history ties into literally every DC story ever told – and it all begins here.
Kingdom Come, Red Son, Wild West Justice League, Captain Carrot and the Zoo Crew – all the worlds you remember can still be found on Telos. Everything matters. Every story matters.

Don’t miss the start of DC’s April/May 2015 event with this special issue!

Why It’s Hot: The next big DC event is here! For the next two months, while DC settles in to their new west coast offices (about fifteen minutes away from yours truly yay!), the DC Universe as we know it today takes some time off. In its place is something some of us never thought we would see again, titles featuring the characters and realities from the Pre New 52. Find out how and why this week! Also, it needs to be mentioned that Ethan Van Sciver is handling the art duties. It’s going to be pretty.

“EYE AM YOUR FUTURE!” 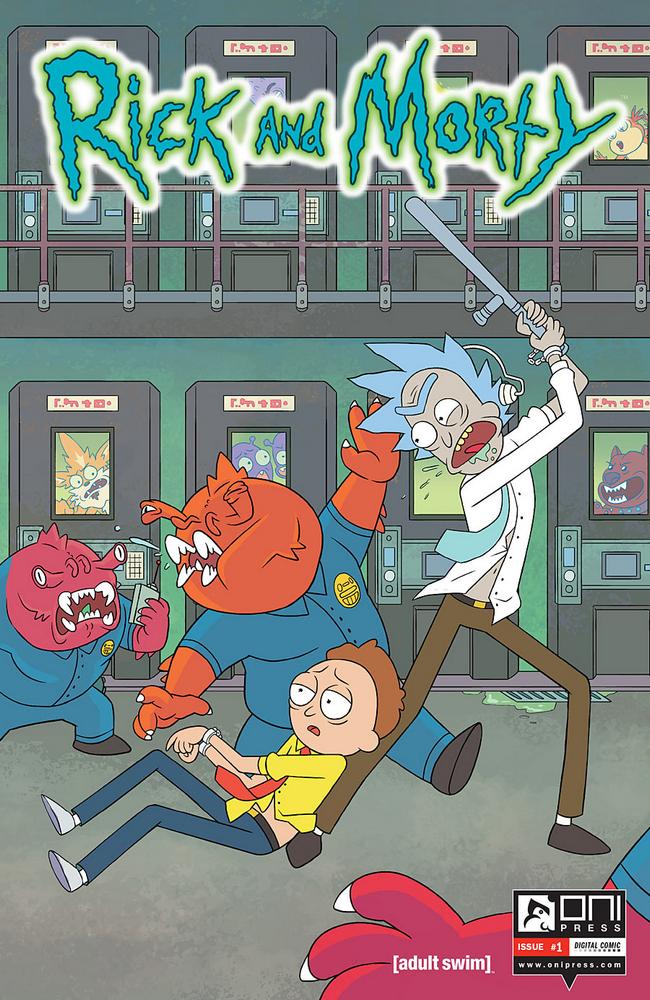 Why It’s Hot: The hot cartoon series gets a brand new comic series courtesy of Oni Press! If you can’t get enough of the characters from one of the best new animated series in recent memory this is a must read!

• Kanan Jarrus–in STAR WARS REBELS, he’s a cocky, sarcastic renegade fighting against the Galactic Empire alongside the rag-tag crew of the Ghost…but years before, at the height of the Clone Wars, he was known as Caleb Dume, Jedi Padawan under the instruction of Jedi Master Depa Billaba. Neither master nor apprentice ever suspected that the Clone Troopers they commanded would turn on them upon the issuing of Order 66-the order to execute all Jedi. How did Caleb Dume survive? How did he learn to survive on his own? And how did he become the man we know as Kanan Jarrus? Writer Greg Weisman (writer/executive producer on STAR WARS REBELS, SPECTACULAR SPIDER-MAN) and artist Pepe Larraz (DEADPOOL VS. X-FORCE, THOR, INHUMAN) bring us a tale bridging the years between the Clone Wars and Rebels!

Why It’s Hot: The final comic launch of Marvel’s initial lineup of Star Wars comics is here! You know him from the hit series Star Wars: Rebels now find out how a kid Caleb survived the events of Revenge of The Sith, and became Kanan The Last Padawan! The first of the new comics to star a character created after the sale to Disney, there is a lot of ground to cover, and history to be told. This might be the most important of the recent launches in regards to Star Wars continuity!