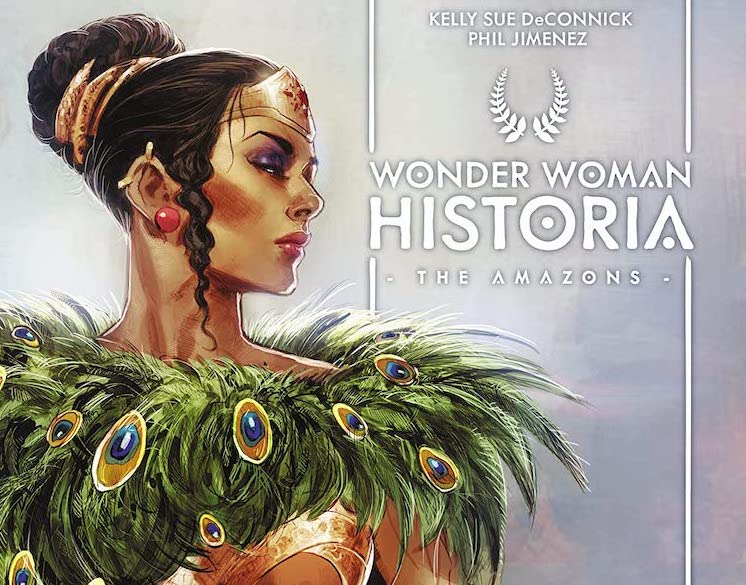 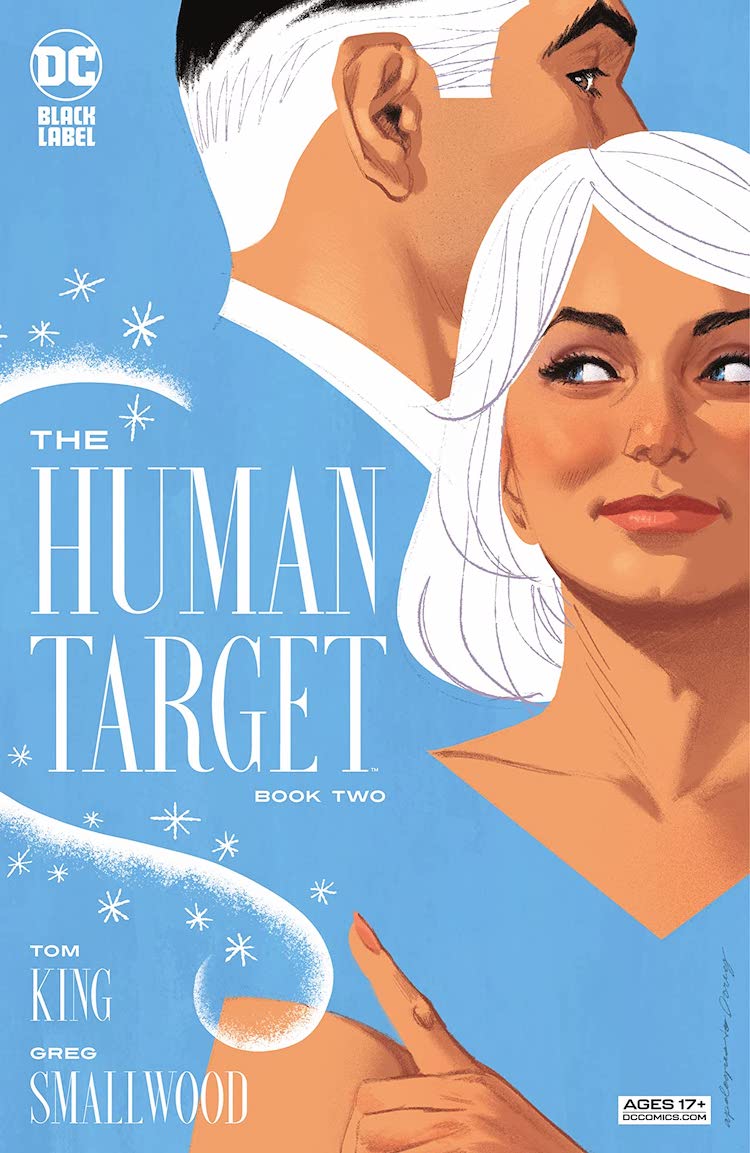 Christopher Chance now has 11 days to solve his own murder. With almost no leads, it would seem the case of his own death has gone cold…but it’s about to get a whole lot colder. Enter Ice, former member of Justice League International, arriving at Chance’s office with some unexpected information…and mysterious intentions.

Why It’s Hot: After a solid start to the limited series last month, Tom King and Greg Smallwood’s Human Target is back for round two, and it does not disappoint. As Christopher Chance starts to attempt to solve his own murder a cold woman walks into his office. If you’re a fan of classic noir mysteries you’re going to want to make sure you’re reading this comic, as the creative team appear to be embracing the genre in fun and interesting ways. Combine that with the beautiful art from Smallwood, and it’s starting to become apparent that King has another winner on his hands. 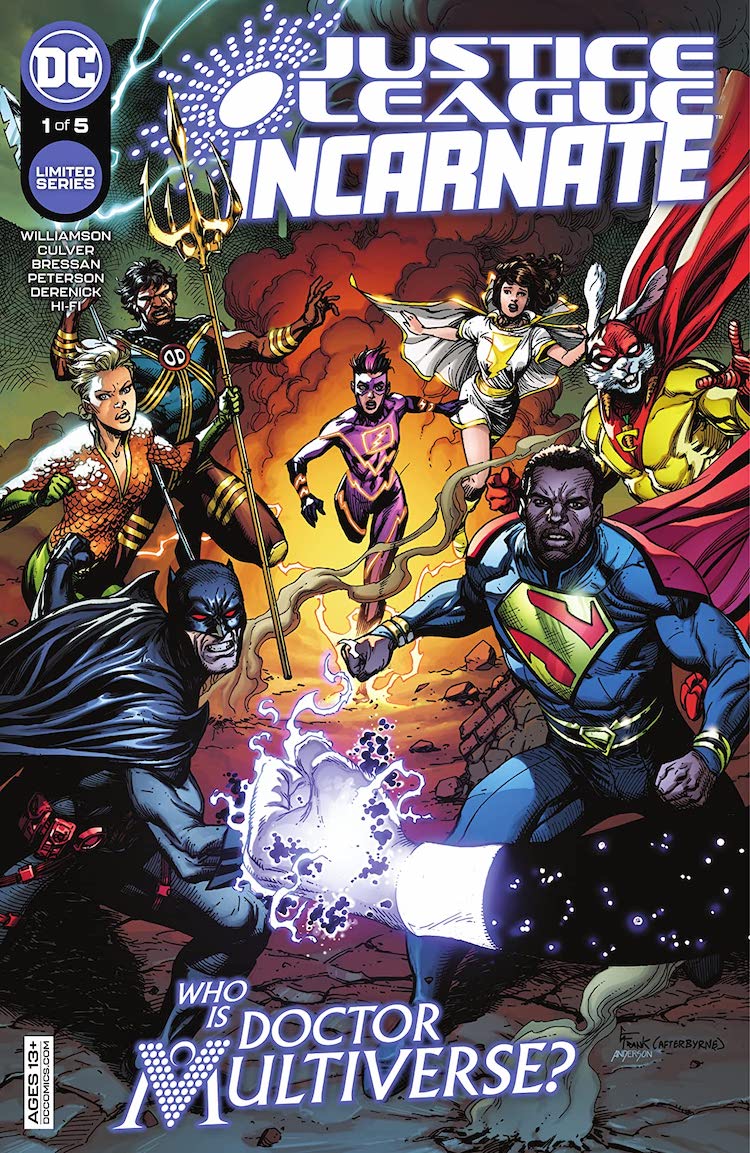 After the shocking ending of Infinite Frontier, Justice League Incarnate defends the Multiverse from Darkseid across infinite Earths!

Following a devastating defeat at the hands of the one true Darkseid, the Superman of Earth-23 leads a team of superheroes from myriad worlds that includes Flashpoint Batman, China’s Flash from Earth-0, Captain Carrot from Earth-26, and the brand new superhero DR. MULTIVERSE from Earth-8 in a last ditch effort to stop the end of every possible universe as we know it!

Written by Joshua Williamson and Dennis Culver with first-issue art by Brandon Peterson and Andrei Berssan and a rotating cast of artists exploring the many different worlds of the DC Multiverse, this can’t-miss series is the next thrilling chapter in the Infinite Frontier saga!

Why It’s Hot: DC Comics has been on quite the hot streak as of late, with series from all corners of publishing line firing on all cylinders. A big chunk of the more immediate success can be traced back to earlier this year, and the Infinite Frontier branding that came out of the Dark Knights: Death Metal event. The continuity of Infinite Frontier was driven by the very surprising and well received mini-series of the same name. Now with Justice League Incarnate the multiverse spanning adventures that started in the Joshua Williamson penned series continues with this second act. If you liked what you read earlier this year you’ll want to continue the journey. If you haven’t read Infinite Frontier, but are enjoying DC great stretch right now, and want to engage with the bigger continuity picture you will want to read this. If you’re a fan of the characters established in Grant Morrison’s Multiversity you’ll want to read this. Pretty much you’ll just want to read this one. 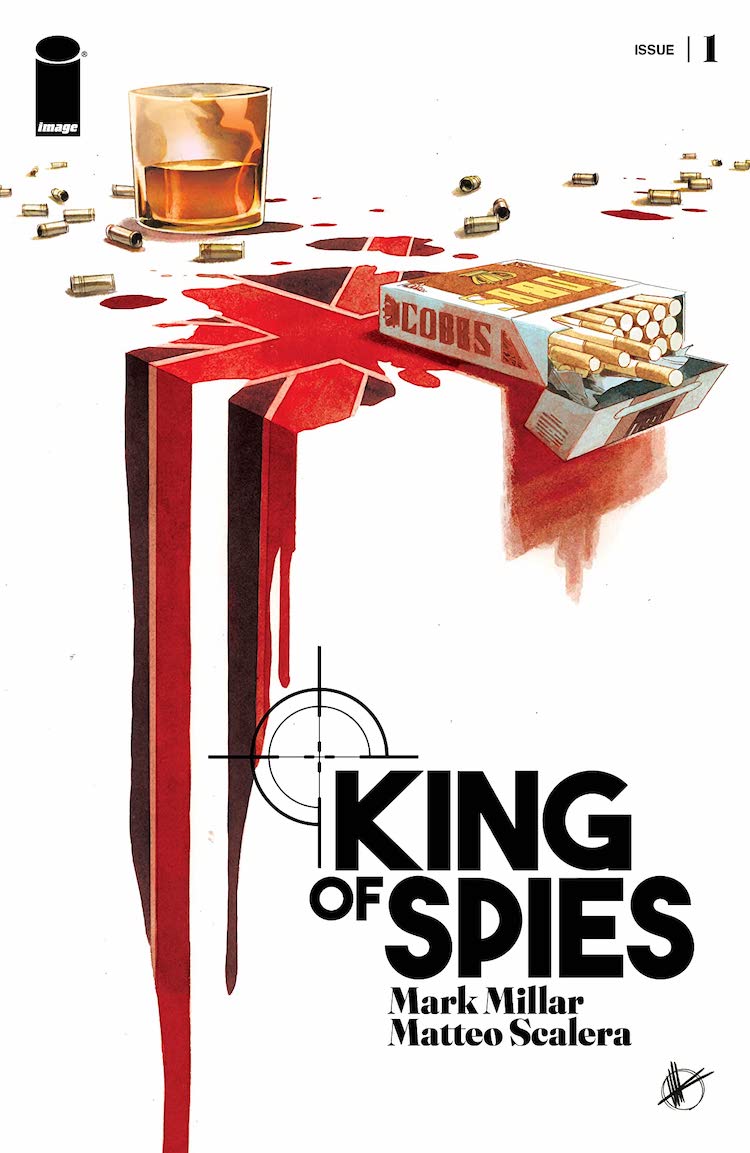 The world’s greatest secret agent has six months to live. Does he die quietly in a hospital bed, or does he make up for a lifetime of bad decisions? He’s been propping up an unfair system for over forty years. Now he knows where all the bodies are buried and has nothing to lose when he turns his guns on everyone who ever made a buck creating the mess we’re in right now.

Why It’s Hot: Millarworld has been a busy place as of late! With the launch of volume two of The Magic Order starting last month (issue two is also out this week), the anime adaptation of Super Crooks hitting Netflix last week, and a new Kingsman movie on the way soon, prolific superstar scribe Mark Millar has somehow found a way to launch yet another series. The story of a character taking care of business and settling scores before they die may not be the most original of concepts (see the first entry in the very piece you’re currently reading for another example), but it’s all about the execution, and the combination of Millar teaming with the dynamic Matteo Scalera has a ton of potential. The Italian artist is a veteran of both Marvel and DC, but after a long run on Black Science with Rick Remender it’s will be exciting to see him stretching his muscles in a different genre again. 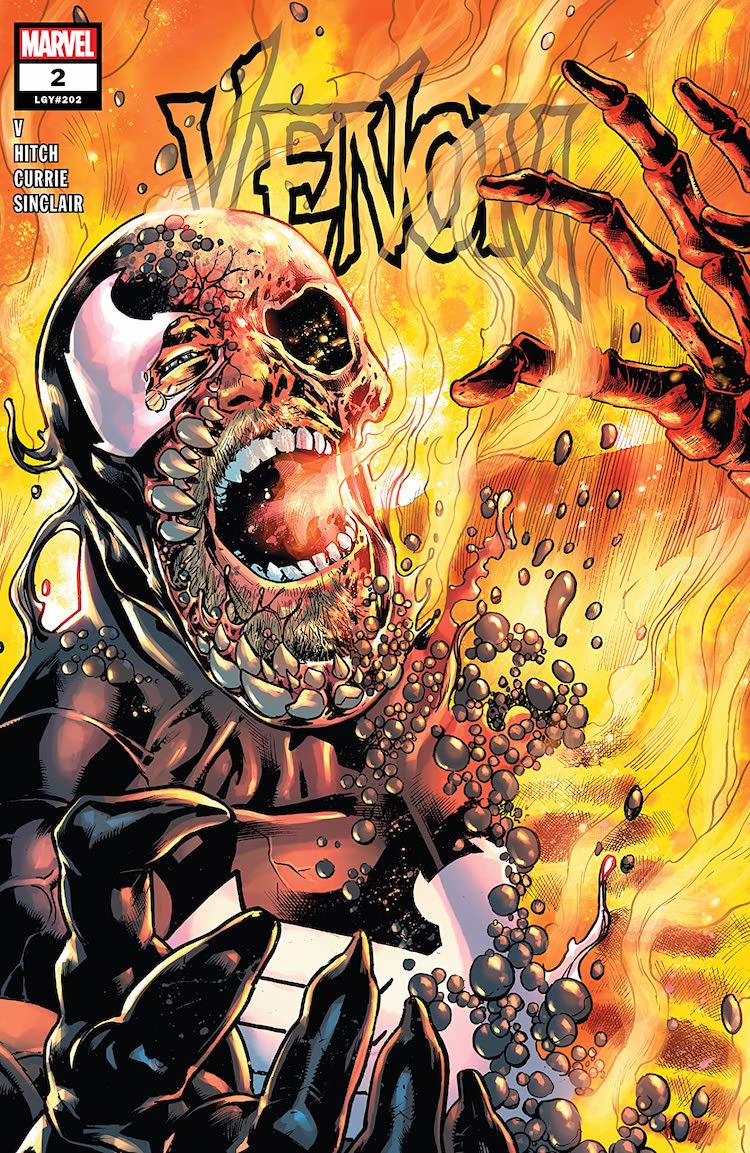 • The tour de force of comics awesomeness brought to you by the dynamite new creative team on VENOM continues! VENOM #1 shocked, intrigued and terrified you!

• With Ram V and Al Ewing weaving a mind-bending story that will push Eddie and Dylan Brock to their limits, and Bryan Hitch doing some of the most action-packed work of his career, VENOM #2 will do all that AND MORE!

Why It’s Hot: One of the best horror writers in comics today is teaming with one of the best cosmic superhero writers in the business for two sides of a cosmic superhero street level horror story all rolled into a single series starring one of Marvel’s most popular characters. Then when you add a legend like Bryan Hitch, doing his best work in years, you get one of the most exciting comics around. The first issue of from this All-Star creative team was wild. It very surely grabbed the baton from the very popular Donny Cates/Ryan Stegman duo (among others), and now appear poised to to make sure Venom stays one of Marvel’s best and biggest. I can’t wait to see where this book goes next. Ram V is up first and we get to see how Dylan Brock, and his new closest friend, are dealing with the events of the debut issue. 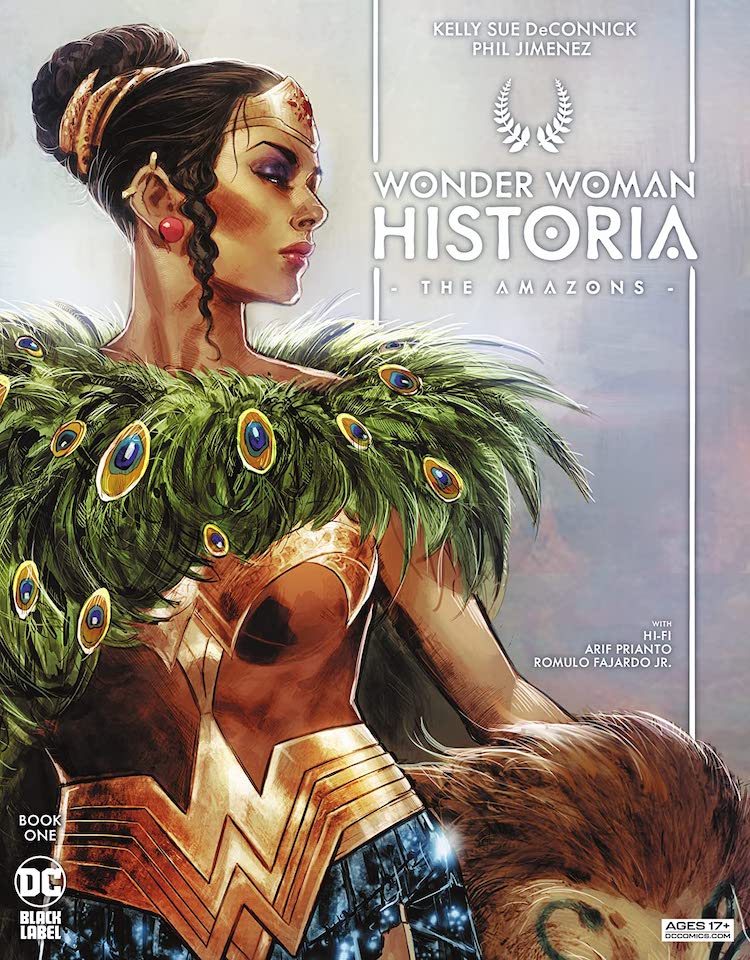 The wait is over, and the entire story of the Amazons can finally be told! Millennia ago, Queen Hera and the goddesses of the Olympian pantheon grew greatly dissatisfied with their male counterparts…and far from their sight, they put a plan into action. A new society was born, one never before seen on Earth, capable of wondrous and terrible things…but their existence could not stay secret for long. When a despairing woman named Hippolyta crossed the Amazons’ path, a series of events was set in motion that would lead to an outright war in heaven—and the creation of the Earth’s greatest guardian!

Legendary talents Kelly Sue DeConnick and Phil Jimenez unleash a reading experience the likes of which you’ve never seen, with unbelievably sumptuous art and a story that will haunt you—with subsequent issues featuring art by modern masters Gene Ha and Nicola Scott! One of the most unforgettable DC tales of all time begins here!

Why It’s Hot: Wonder Woman Historia: The Amazons #1 might just be the best looking comic book ever published. What Kelly Sue DeConnick, Phil Jimenez, and the rest of the creative team have created is an absolute triumph of comic book storytelling, and hands down the best single issue of a comic book in the year 2021. That’s a lot of hype, but it more than lives up to it, and I want to make sure you don’t miss out on a special, special comic book.