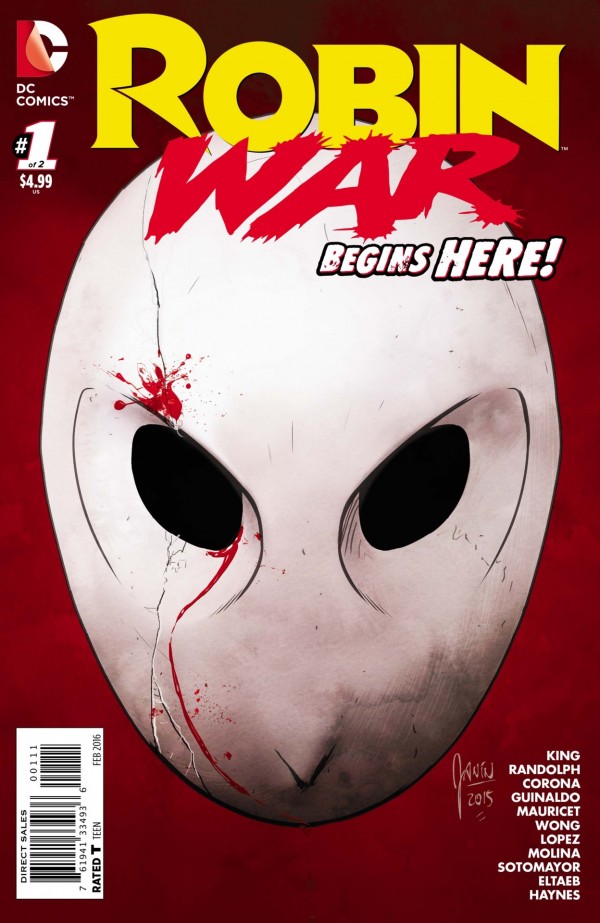 Back in black and on his home turf, Daredevil begins again in New York City as a new enemy emerges. Meanwhile his alter ego, Matt Murdock, is on a new side of the law in the District Attorney’s office. Fighting crime in the shadows, prosecuting bad guys in the light, it’s a whole new chapter for our man without fear-including the arrival of the devil’s advocate. Welcome to Hell, Blindspot.

Why It’s Hot: Daredevil has consistently been one of Marvel’s best titles over the past fifteen years. There have been classic runs by guys with the names Bendis, Maleev, Brubaker, Lark, Waid, and Samnee. That’s quite a bit of history for Soule and Garney to live up to, but every look we get at the new series, the more I believe that they will do so. Soule has proven to be one of Marvel’s go to writers, and the art looks like it might be the best that Ron Garney has ever produced.

Damian Wayne returns to Gotham City, and he is not happy. There are kids all over the city calling themselves Robin, Bruce Wayne is no longer Batman and the GCPD, led by the new, armored-up Batman, is cracking down on anybody wearing the “R.” And things only get worse when Red Hood, Red Robin and Grayson all come back to Gotham City…

Why It’s Hot: New Bat-Family crossover that focuses on the legacy of Robin? The introduction issue written by one of the hottest writers in comics right now? Count me in! 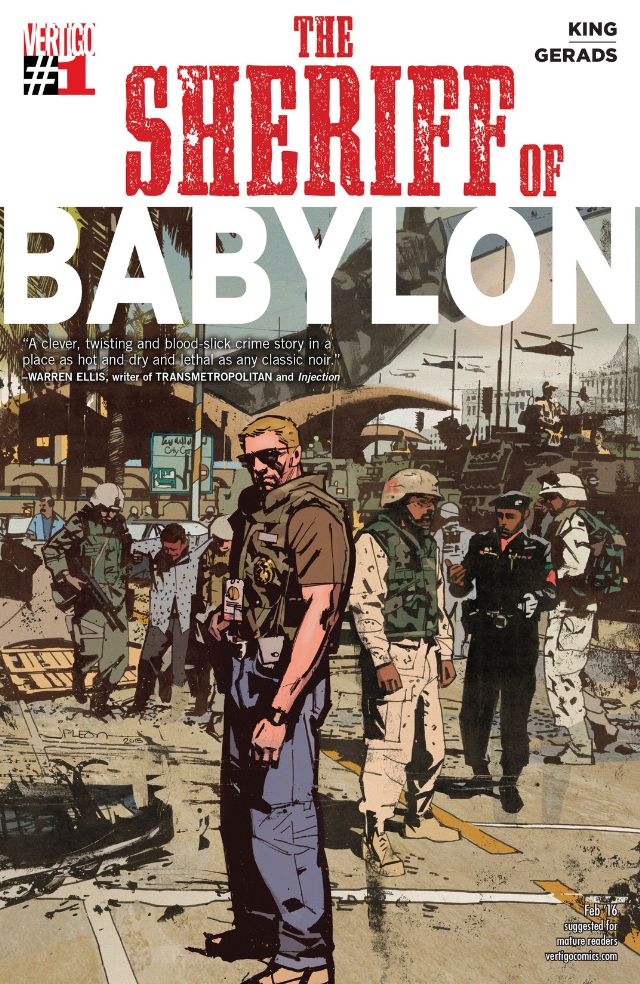 Baghdad, 2003. Florida Police officer-turned-military contractor, Chris Henry is tasked with training a new Iraqi police force. When one of his trainees ends up dead, Chris is forced to team up with Nassir, the last remaining cop in Baghdad. Pulling the strings to bring them together is the mysterious Sofia, an American-educated Iraqi who has returned to take control of the city’s criminal underworld. This miniseries is a thrilling wartime crime drama told amid one of the most tumultuous times in modern history.

THE SHERIFF OF BABYLON is a new eight-issue miniseries pulled from GRAYSON cowriter Tom King’s real-life experience as a CIA operations officer and is illustrated by Mitch Gerads, cocreator of The Activity.

Why It’s Hot: Former CIA officer Tom King gets in on the Vertigo Renissance with a story taking place during the Iraq War in 2003. This time period hasn’t been covered too much in popular culture, and to have a writer who can draw from their own experiences on the ground is exciting. When you throw in the art of one of Mitch Gerads, one of the best artists when it comes to depicting modern warfare, you have a must read new series.

THERE’S A BRAND NEW HULK IN TOWN, AND HIS NAME IS AMADEUS CHO!
Get ready for the craziest Hulk story of the millennium as a kid genius decides he’s gonna be the best Hulk ever — and just possibly brings the entire Marvel Universe crashing down into chaos! Totally awesome beach day! Massive monster mayhem! She-Hulk and Lady Hellbender! Massive heart and ridiculous action brought to you by PLANET HULK writer Greg Pak and superstar artist Frank Cho! Is it possible for us to fit in one more exclamation point? YES!
Why It’s Hot: Greg Pak + Hulk = Awesome. Greg Pak + Amadeus Cho = Sublime. Greg Pak + Frank Cho = Top notch creative team. Greg Pak + Frank Cho + Amadeus Cho as the new Hulk = One of the most anticipated books of All New All Different Marvel.

• After the stunning, heart-stopping events of Vision #1, the Avengers will never be the same.
•  The Vision and his family attempt to cope with these events in their own, unique way. Though they put on a happy face, each of them can feel their anger growing, blistering, tearing them apart.
•  Will the Visions be able to hold together, or will that anger destroy them and the world around them?

Why It’s Hot: The first issue of The Vision was arguably the most surprising debut issue of 2015. Tom King, and Gabriel Hernandez Walta took The Vision in directions that nobody expected, and took a book with little buzz, and made it skyrocket to the top of the pack for many readers. Oh, and yes, this is the same Tom King from two entries up above. Like I said, he is one of the hottest writers in the business, and this week is going to be a prime example of why.