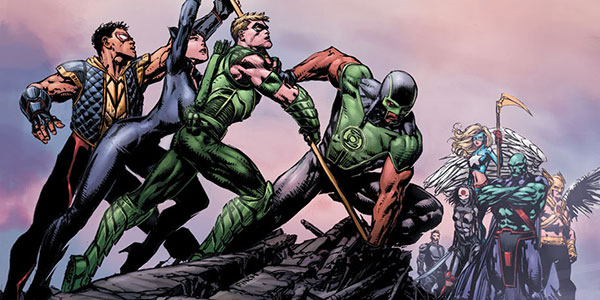 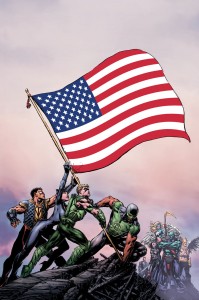 The march toward TRINITY WAR begins with part one of “WORLD’S MOST DANGEROUS”! Green Lantern! Green Arrow! Catwoman! Katana! Vibe! Hawkman! Stargirl! They aren’t the world’s greatest super heroes-they’re the most dangerous! But why does a team like the JLA need to exist? What is their ultimate mission? And who is pulling the strings? Plus: Find out why Martian Manhunter is the most dangerous of them all. Period.

Why It’s Hot: The day is finally here. A brand new Justice League makes its debut and they’re a little different than the big team we’ve grown used to. Led by Steve Trevor and Amanda Waller, this team promises to be a mix of what we’ve loved about Geoff Johns’ take on the Justice Society of America with a classic Suicide Squad government-mission feel. Stargirl makes her New 52 debut and we have a team that could be the most racially diverse in the new DC Universe yet. And to top it off, superstar artist David Finch takes on art duties! What more reasons do you need? 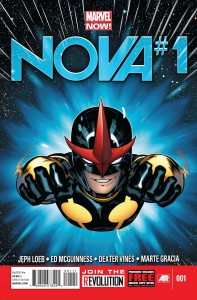 The Human Rocket returns! You’ve followed him through the history making (and changing!) AvX and now the mystery of the all-new Nova are revealed in this breathtaking new ongoing by the best-selling, award winning team of Jeph Loeb and Ed McGuinness (RED HULK, Avengers X-Sanction). Sam Alexander is a kid bound by the gravity of a small town and a father whose ridiculous, drunken fairy tales about a “Nova Corps” were just another heavy burden in a life full of them. But luckily for Sam Alexander…soon gravity won’t even matter. And those troubles? It’s like they’re a billion miles away.

Why It’s Hot: The latest Marvel NOW! launch is Marvel’s first foray into an area that’s bound to be central to their publishing plan the next year: the Cosmic. We all loved Marvel’s first AvX Infinite story with Nova, and with major stories involving the Guardians of the Galaxy and Thanos already on the horizon, what better way to get in on the ground floor than with this #1? 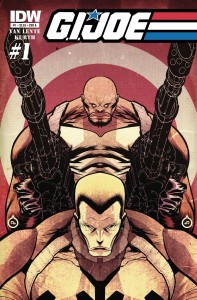 YO JOE! The truth is out: the world knows the G.I. JOE team is real. Now Duke leads his squad directly into the public eye, confronting COBRA on American soil! The best of the best just got better, as Fred Van Lente and Steve Kurth lead the charge and we roll out one new G.I. Joe title a month for the next three months!

Why It’s Hot: It’s a brand new beginning for perennial favorites G.I. Joe and their desperate enemy, the terrorist organization known as Cobra. Now the battle goes public. Comicosity spoke with Van Lente about the series launch and it guarantees to be something to talk about in the coming days! 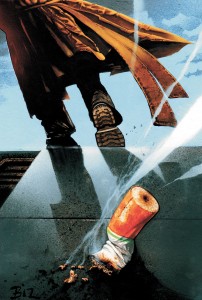 It’s the heart-rending conclusion of “DEATH AND CIGARETTES”-and the end of Vertigo’s longest running series. John Constantine has escaped, cheated, narrowly avoided and even reversed death on multiple occasions over the past 25 years. Now, we will test whether the old boy has one more second chance in him. Don’t miss this epic, oversized special issue celebrating everything that makes John Constantine so bloody unique.

Why It’s Hot: Next month sees the debut of the new Constantine series in the New 52, but before that happens, we have to say goodbye to Vertigo’s longest running series. Over the years, Hellblazer has featured some of the best horror tales in comics history, and Milligan’s story of John’s marriage to Epiphany has been among some of the most enjoyable for its addition to the Constantine mythos. So, will John have a happy ending? Not bloody likely. 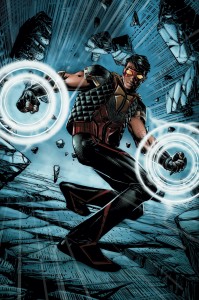 No, that’s not a typo. Vibe stars in his own ongoing monthly title, starting with this debut issue cowritten by GEOFF JOHNS! One of the most unlikely members of the Justice League of America ever (okay, THE most unlikely) will soon discover he’s one of the most powerful individuals on Earth. But how did Vibe get his abilities? What is the cost to them? And why does the JLA want him on the team so desperately? Plus: We’ve seen the Red Room and the Black Room, but what is…the Circus?

Why It’s Hot: Yes. Vibe. YES! I know everyone (but me) is super skeptical about giving an ongoing title to such a D-list character, but I have two things to say: A) In Geoff Johns I Trust, and B) don’t we owe Vibe one? The dude was introduced in 1984 as one of the most stereotypical characters of color ever (although I have no doubt the creators’ intentions were good for adding diversity to the Detroit era of Justice League of America) and summarily killed off in 1986. The man has been a joke in comic fan circles for over twenty years, but has awesome powers and a unique background, setting, and supporting cast. Check out Comicosity’s interview with Andrew Kreisberg and then give the first issue a try! If nothing else, people will be talking about it this week. Don’t you want in on the conversation?