•  EVERY SPIDER-MAN EVER MUST FIGHT AND NO SPIDER IS SAFE!

Why It’s Hot: The penultimate chapter of the biggest Spider-Man event ever is here! Who will live? Who will die? How will the Peters (Bens, Mays, Gwen, etc.) pull off the victory!? What we do know is that the event has been stellar so far, and the odds of Slott sticking the landing are high. In other words, don’t miss out! 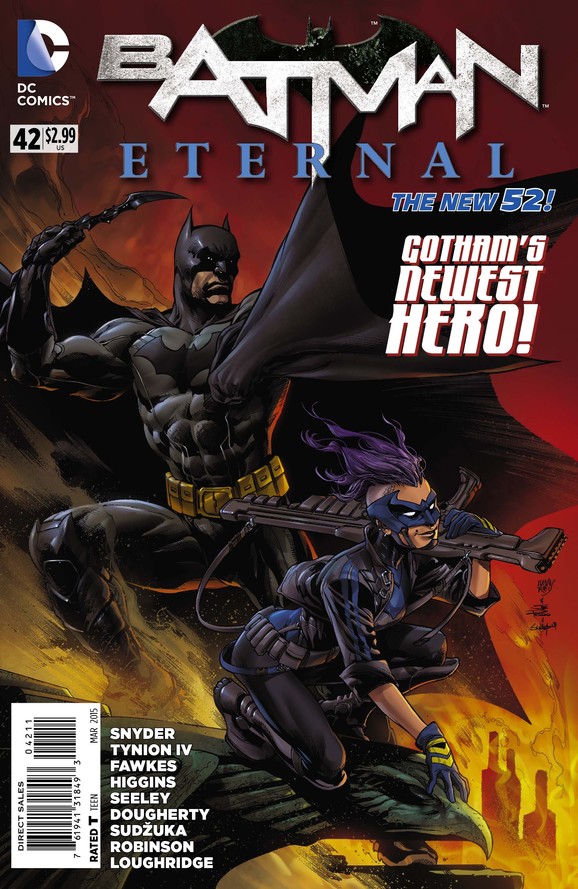 You’ve been waiting for the debut of Bluebird – and here it is, though this story may not have a happy ending!

Why It’s Hot: Harper Row has been one of the most interesting additions to the Batman mythos over the past few years. We have known for awhile that she would be taking up the costumed mantle of Bluebird, but this is the week that we see her in action. This could end up being a huge moment for the Batman books!

•  THE INVADERS meet the FANTASTIC FOUR as the hunt for REED RICHARDS and the missing kids of the FUTURE FOUNDATION continues.
•  Meanwhile the mastermind behind everything unveils his ultimate plan.
•  But how does FRANKLIN RICHARDS factor in?
•  Guest starring JIM HAMMOND, NAMOR, THE NEW CAPTAIN AMERICA and…DOC GREEN?

Why It’s Hot: The end is near for Fantastic Four, as the title starring Marvel’s First Family is being sidelined for a bit following the story arc that begins here. It’s a sad moment, and the reasons for the cancellation aren’t exactly clear, but count on James Robinson and Leonard Kirk to give Reed, Sue, Johnny, and Ben the send off they deserve.

Once upon a time, a troupe of has-been actors that starred on an old sci-fi show were enlisted by an alien race to save them from an intergalactic tyrant. Despite being way out of their depth, the cast somehow managed to save the aliens and stay alive… but their actions in outer space may have had dire consequences for another world. Join us this January as the cast of GALAXY QUEST returns for another bombastic journey into space!

Why It’s Hot: Who doesn’t love Galaxy Quest? The beloved cult science fiction movie gets the comic treatment, and it’s a must read for fans. Never give up, never surrender until this book is in your hands!

Just in time for the debut of the long-awaited POWERS TV show comes this brand-new number one, a perfect jumping-on point for fans new and old! The Eisner Award-winning POWERS tells the story of homicide detectives Christian Walker and Deena Pilgrim, who are assigned cases specifically involving powers. If a superhero falls dead from the sky or a super villain is found dead in the gutter, it’s up to Walker and Pilgrim to solve the case. But having barely survived the most harrowing case of their careers and discovering government corruption of the highest level, Walker and Pilgrim are now faced with the most difficult decision they’ve ever had to make. Plus: the discovery of a power no one has ever seen before! This issue – double sized for the regular price – will also include an exclusive behind-the-scenes look at the making of the POWERS TV show with never-before-seen pictures from the set.

Why It’s Hot:  After a long road to air the Powers television show is getting ready to launch on through the Playstation Network. That makes now the perfect time for Bendis and Oeming’s creative owned baby to get a new number one with a fresh jumping on point. The series has been around awhile, and thus doesn’t get the attention it once did, but the story of Detectives Walker and Pilgrim is still one of the most engaging in comics. If you haven’t read the book before now this week is the perfect time to get started.