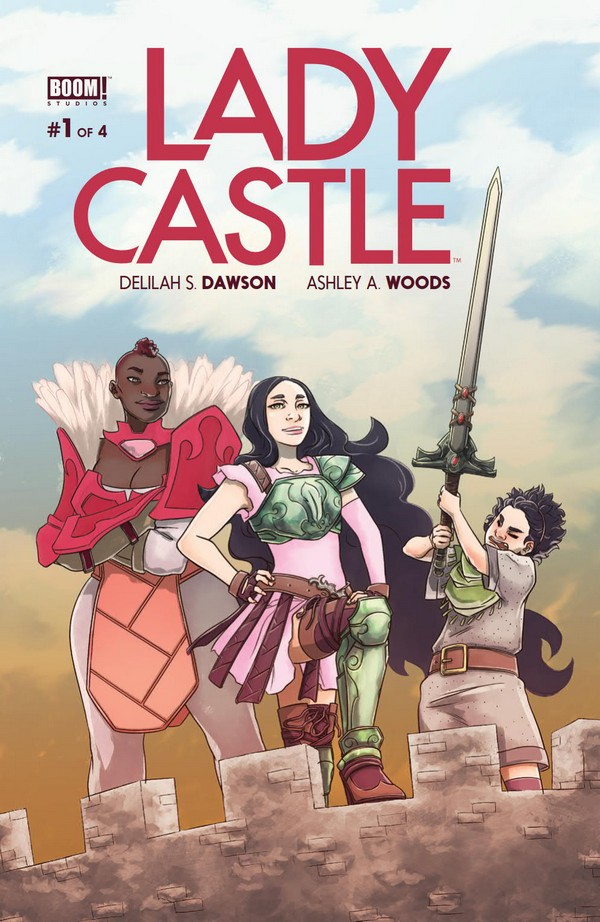 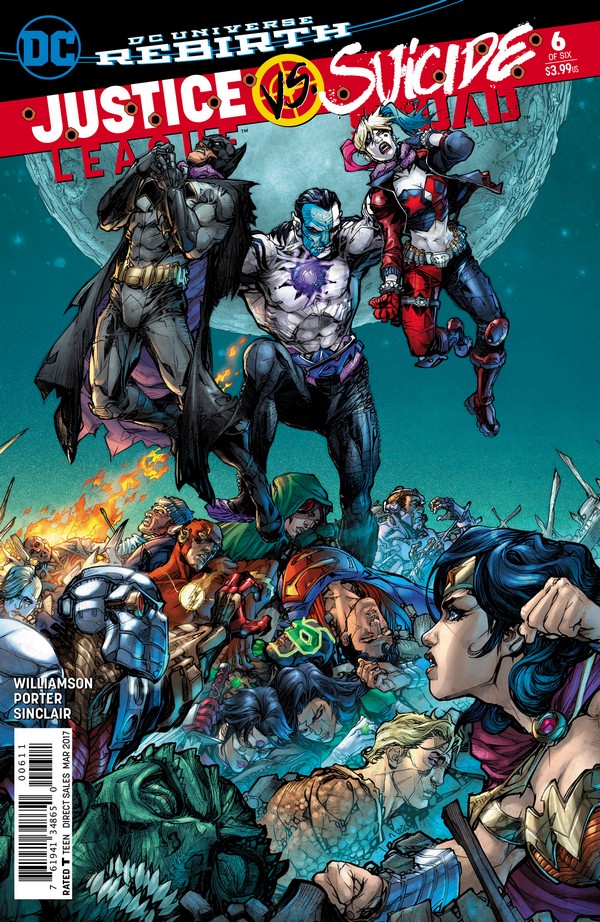 Legendary JLA artist Howard Porter returns for the ultimate showdown between the Suicide Squad, the Justice League and the forces of [REDACTED]. Unlikely heroes emerge from the rubble of DC’s first major event since DC UNIVERSE: REBIRTH, leaving both teams in a place they’ve never been before…and setting the stage for the all-new JUSTICE LEAGUE OF AMERICA

Why It’s Hot: This is it! The final battle between Batman’s new look Justice League and the big bad that has caused headaches (quite literally in some cases) for all of our favorite characters. The weekly release schedule ensured a quick moving event that flowed nicely. By the end of this issue secrets will be revealed, and new characters will have graduated to the upper echelon of DC heroes. Congrats to Joshua Williamson and company for the success of the first post Rebirth DC event. 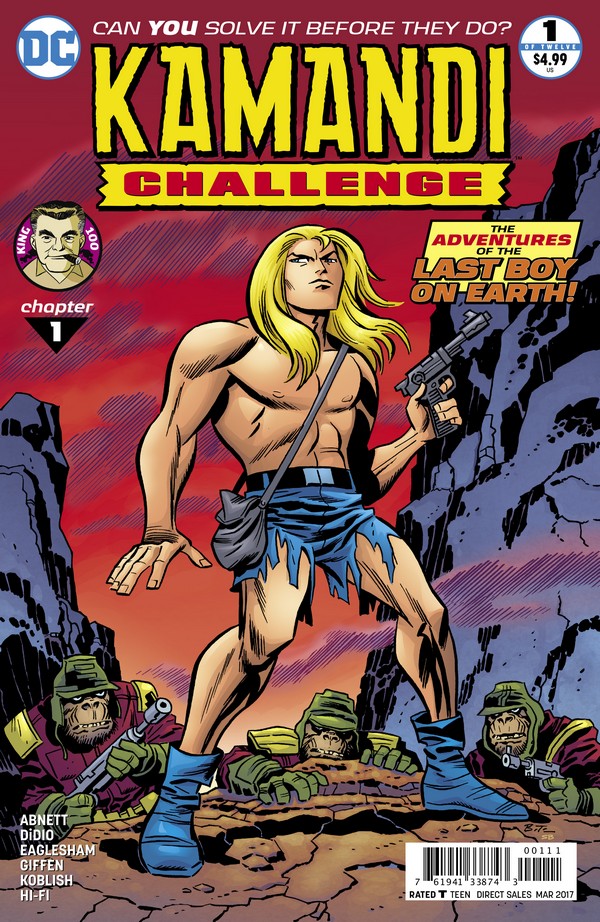 Prepare to take part in one of the greatest adventures from the infinite future of the DC Universe, and join the industry’s top creative teams in a round-robin, no-holds-barred, storytelling extravaganza titled THE KAMANDI CHALLENGE! Born from the mind of Jack “King” Kirby, the post apocalyptic Earth of Kamandi has been a fan favorite for decades, and now 14 intrepid teams of writers and artists build on this incredible foundation and take the title character on an epic quest to find his long-lost parents and travel to places seen and unseen in the DC Universe.

Each issue will end with an unimaginable cliffhanger, and it’s up to the next creative team to resolve it before creating their own. It’s a challenge worthy of “The King” himself! In this premiere issue, the Last Boy on Earth is dragged from his safe haven by a group of tigers, only to face the nightmarish threat of the ultimate weapon!

Why It’s Hot: The Kamandi Challenge is an amazing idea, and I hope this experiment is only the beginning of pushing the envelope in finding new ways to tell stories. To celebrate what would have been the 100th birthday of Jack Kirby this year, DC has gathered some of their top creators to tell a twelve issue story starring one of the most popular of “King” Kirby’s DC creations. The cool part? Every issue is going to end with an impossible cliffhanger that the next issue’s creative team will have to write their way out of. To show how it’s going to work, this first issue features the first two creative teams. This project is going to be a great tribute to arguably the best creator ever, and you should check it out.

When King Mancastle and his mighty vassals ride off on crusade, the women left behind are not at all put out-that’s a lot less armor polishing for them to do. Of course, when the men get themselves eaten by a dragon and leave a curse that attracts monsters to the castle…well, the women take umbrage with that. Now the blacksmith’s wife Merinor is King, Princess Aeve is the Captain, and the only remaining (and least capable) knight Sir Riddick is tasked with teaching the ladies of the castle how to fight, defend, build, and do all manner of noisy things the men had been doing while the women assumed they were just drunk. Novelist Delilah S. Dawson (Star Wars: The Perfect Weapon, As Wicked as She Wants, Wake of Vultures) brings her first original series to comics, and is joined by breakthrough illustrator Ashley A. Woods (Niobe: She Is Life) for a rollicking fantasy adventure featuring women reclaiming their lives on their terms.

Why It’s Hot: One of the cool things in indie comics right now is to have a comic starring a group of women going around being bad ass and proving all the stupid men wrong. This is the most popular within the fantasy genre. So with the market featuring several similar titles what helps Ladycastle stand out? That would be the quality of Dawson’s writing. The writing is quick witted, and sharp with a simple but smart hook. All the men left and didn’t make it back, thus leaving it up to the women to take control and protect their besieged home. Woods is no slouch either, as her art forms a wonderful marriage with the script. This series is going to surprise a lot of people this week, so don’t sleep on it. 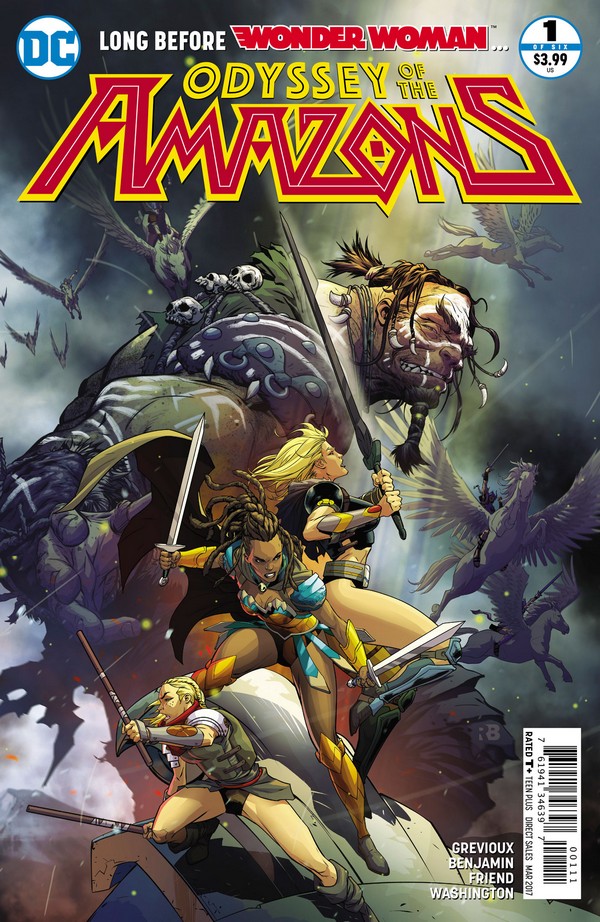 ODYSSEY OF THE AMAZONS #1
Written by Kevin Grevioux
Art by Ryan Benjamin
Published by DC Comics – $3.99

Don’t miss the start of this new miniseries set in the world of Wonder Woman from writer/actor Kevin Grevioux (New Warriors, Underworld). Years before the birth of Princess Diana, a group of Amazons set out on a globe-spanning quest to find others of their kind, encountering legendary creatures and beings along the way. But their journey soon turns into a rescue mission as two of their own are captured by the legendary Storm Giants of Norse mythology. It’s up to their leader, the stalwart Hessia, to keep them together through the many trials that lie ahead.

Why It’s Hot: A Wonder Woman spinoff! This prequel to the current day series is all about the history of the Amazons. That means new characters, new adventures, and more awesome Amazonian action. Hopefully this comic succeeds to prove that there is room in Big 2 comics for stories that don’t feature the biggest names every issue, and for spinoffs that add rich backstories to different characters. 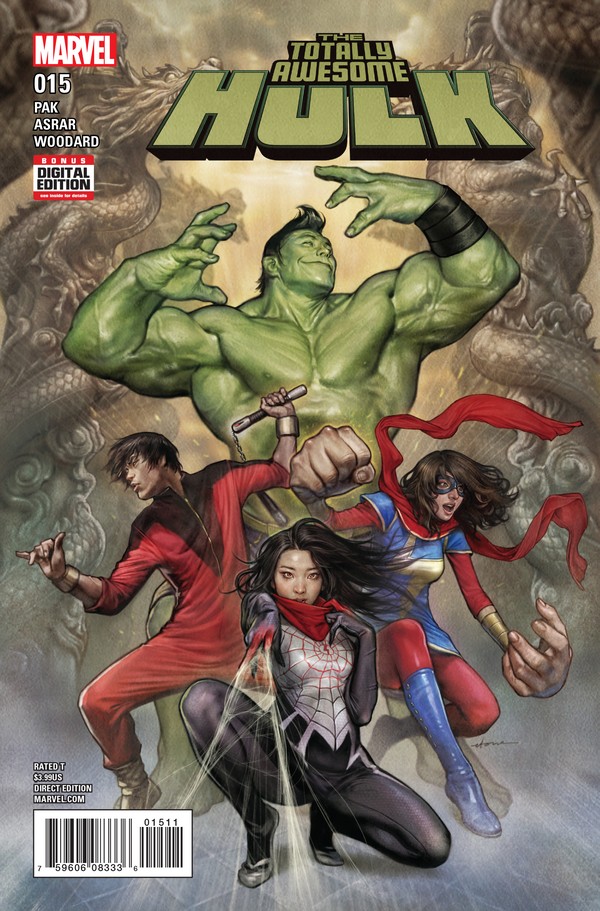 •  Amadeus Cho is slowly learning how to become a team player, but he better learn fast when Ms. Marvel, Shang Chi, Silk and a host of other heroes come to town!

Why It’s Hot: Diversity matters, and often times it’s Asian characters, or characters or Asian descent that get overlooked. Well, that has slowly but surely been changing at Marvel with the introduction and reinvention of numerous Asian characters over the the past few years. Now the diverse Asian creative team of Pak and Asrar are bring together a diverse group of Asian characters for a team up of epic proportions. I believe Pak referred to this issue over on Twitter as featuring the most Asians in a single comic ever. I’m not sure if that’s the case, or how serious he was being, but I wouldn’t be surprised. I pushed the diversity angle because it is important. If you look beyond that though you have a group of truly great characters coming together in this issue, and that would be cause for inclusion on this list no matter what. Not to mention the series is already a great read, so if you have been missing out then now is the perfect time to jump aboard.