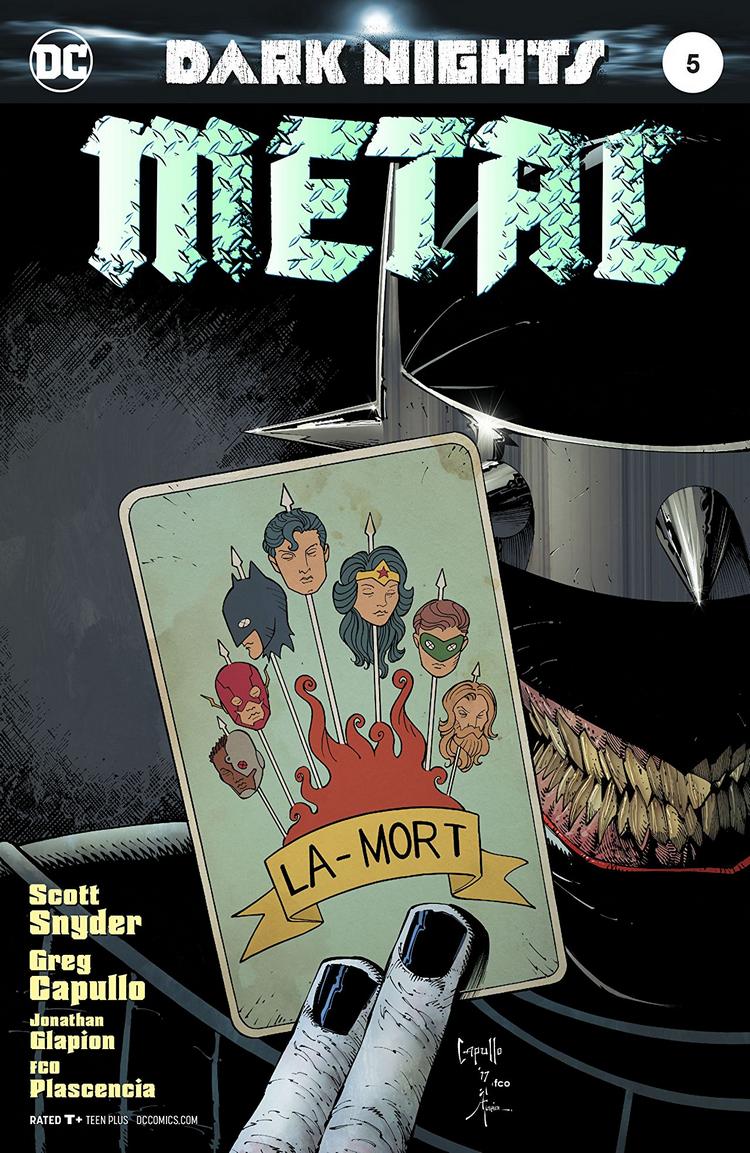 Happy “fifth week” of January fellow comic book fans. In the past there was nothing happy about a fifth week, as they’ve been historically slower and full of annuals, specials, mini-series, and awkward “Fifth week events.” While there are still a lot of annuals this week these annuals appear to feature huge stories matter, the big “Special” is one of the best issues of the month, and almost every publisher is dropping some big issues. Without further interruption here is the Comicosity Hot Five for January 31, 2018.

The Justice League faces the final extinguishing of our world, invaded on all sides by unimaginable nightmares, fueled on to the edge of oblivion only by the belief that there must be a light in the endless darkness-somewhere. But…what if there’s not?

Why It’s Hot: Dark Nights: Metal may have hit a few delays, but it hasn’t seemed to have slowed down the story any, as the plot keeps rocketing forward. After the events of last issue the heroes have their backs against the wall as Barbatos prepares to unleash his power and wipe out life as the DC Universe knows it. How will the heroes pull themselves out of this? Will there be help from some old friends? Maybe fisticuffs? Some wild concepts and ideas? How about all of the above? Almost six years later and the hall of fame worthy partnership of Scott Snyder and Greg Capullo continues to evolve, and most importantly produce great comics. 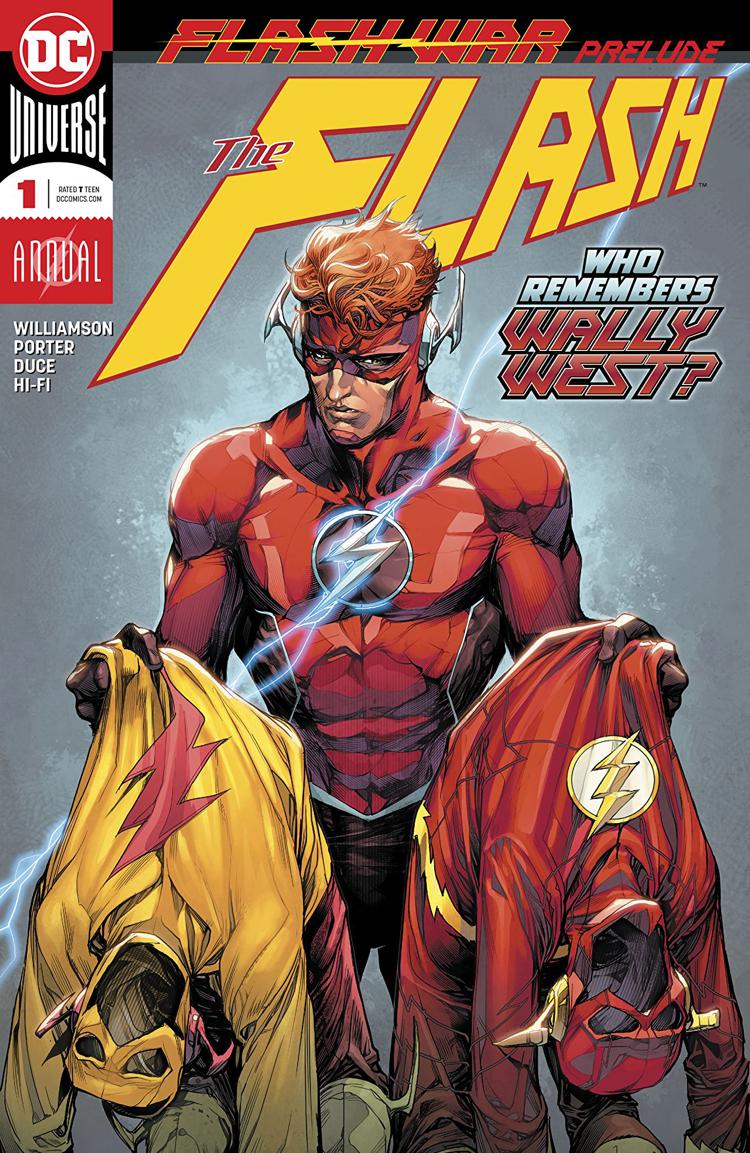 “FLASH WAR” prelude! The biggest Flash story of 2018 starts here, with a special story starring the classic Wally West, who’s conflicted over whether to let Iris West know he is alive-and he’ll need the help of the Flash to figure out what to do! But when Magenta, Wally’s old love, needs his help, the Flash returns home to Keystone City where he is confronted with violent memories of an unknown world…A major turning point for the Flash family that sets the path for earth shattering stories in 2018!

Why It’s Hot: The Flash has been the focal point of some of the most important stories in DC history, and now one of the character’s biggest stories in recent memory will take place in his solo title. It all starts here in this special prelude to Flash War. Since the DC Rebirth started Joshua Williamson has taken The Flash to heights (speeds?) not seen since the days Geoff Johns was writing Wally West and bringing Barry Allen back after 20+ years. If you haven’t been on board with this run now is the time to start. 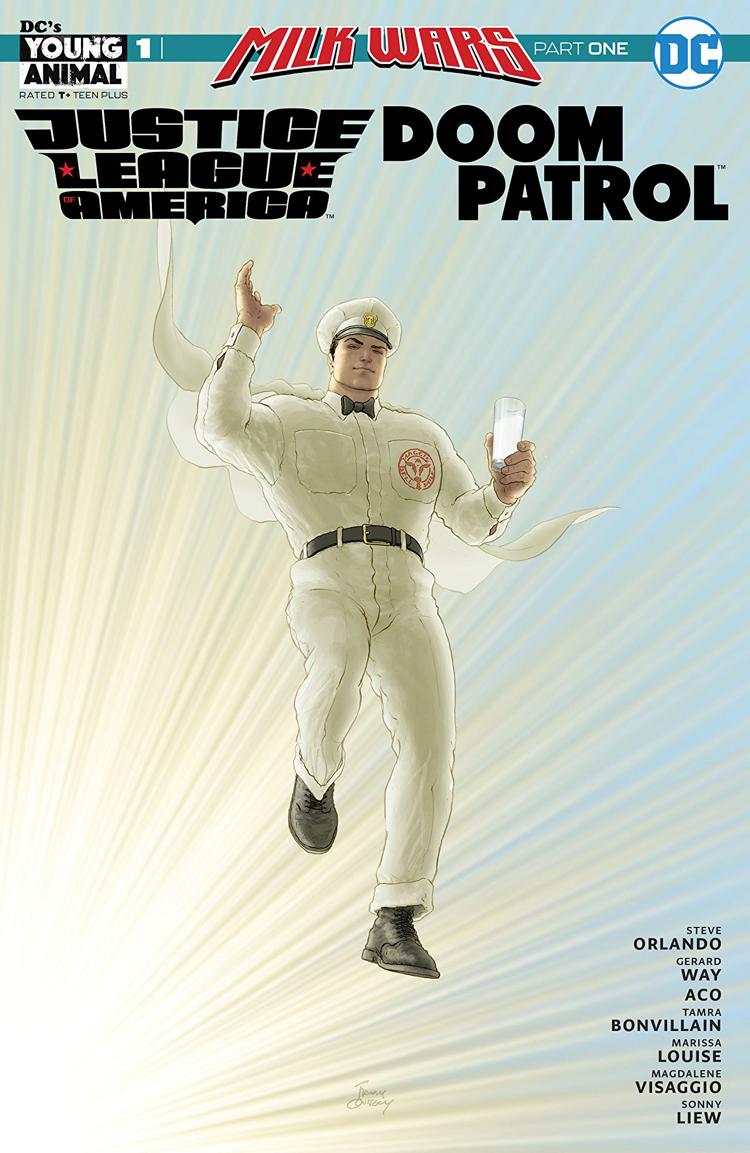 “MILK WARS” part one! Welcome to the un-event of the year! Kicking off a line-wide adventure, DC’s Young Animal collides with the DC Universe to bring you a different kind of crossover. The Doom Patrol has discovered that an interdimensional corporation called RetCo has been stealing stories, reconfiguring them and repackaging them for new markets. Our gang of misfit heroes have felt the touch of this nefarious company, and it has already started to change them. Even scarier, though, is how deeply RetCo has embedded itself into current continuity, using the radioactive milk of psychic cows to quell the more dangerous impulses of the Justice League and turn them into heroes safe for the masses. And to kick this off, RetCo has gone all the way to the top. Meet Milkman Man, heretofore unknown final son of Krypton, who was sent to our planet to save him from the destruction of his homeworld, only to be adopted by an evil dairy farmer and raised to love all things dairy! Co-plotted by Steve Orlando and Gerard Way, with art by ACO (MIDNIGHTER), this extra-sized special starts “Milk Wars” with a splash! Plus, who is Eternity Girl, and how does she connect to this whole scheme? A special four-part back-up feature by Magdalene Visaggio (Kim and Kim) and Sonny Liew (The Art of Charlie Chan Hock Chye) begins here.

Why It’s Hot: Young Animal and the DC Universe collide as the Milk Wars event begins in the pages of this super sized special featuring the JLA and Doom Patrol teaming for the first time in quite awhile. This is a must read for DC fans everywhere, and trust me when I say this will end up being one of the best and coolest issues of 2018. The entire creative team is on point, the story is the right kind of weird for Doom Patrol while making sense for the JLA. Not to mention there are ideas, characters, and moments that will make longtime fans of DC Comics a bit emotional while being perfectly accessible to newer fans. This issue feels like Steve Orlando and Gerard Way’s love letter to DC by way of Young Animal. It helps that artists ACO, Hugo Petrus, Tamra Bonvillain, and Marissa Louise are on top of their game with some absolutely STUNNING art. This is the good stuff folks, and it’s made even better by an awesome Eternity Girl backup story by rising star Magdalene Visaggio and Sonny Liew. Throw in a cover by the legend Frank Quitely, and this is the complete package. If you can’t tell, I’m really excited about this comic, and I hope you are too. 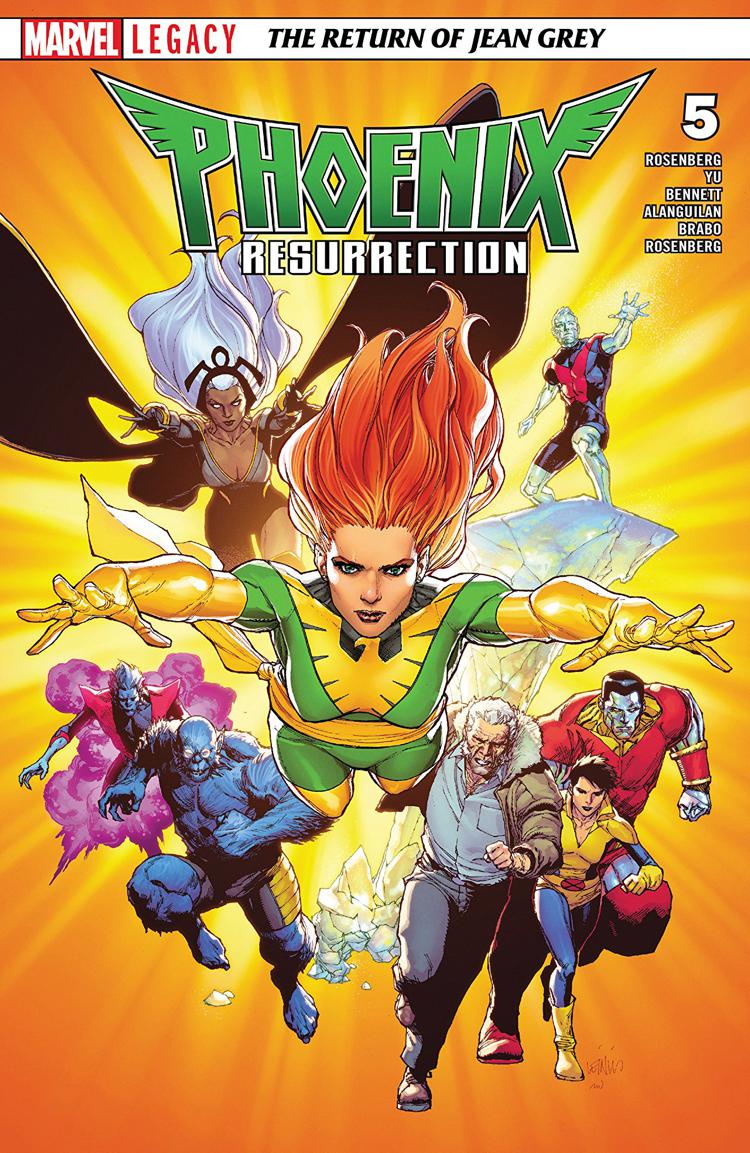 A light in the darkness is not always welcome.
Kitty Pryde, Old Man Logan and Cyclops are leading teams of X-Men all across the globe, chasing events connected to the Phoenix. But with teammates disappearing and familiar enemies returning, the X-Men are fighting a losing battle. Beast doesn’t know how or what shape it will take, but he knows they are running out of time before the Phoenix makes its true presence known.
Meanwhile, a young woman named Jean is starting to go insane in her peaceful, suburban life. Nightmares and daydreams are spilling over into the world and revealing cracks in her reality. Jean’s life and everything in it may just be a facade, but made by who? And why?
Jean needs to escape. The X-Men need to stop the cycle of death the Phoenix brings. Their worlds will violently collide as Jean searches for an opening and the X-Men fight for closure. But when they are brought together, will the X-Men be reunited with their long-lost teammate – or something darker?

Why It’s Hot: Jean Grey is back and comes face to face with the cosmic being known as The Phoenix in an issue that feels like it was the culmination of over 40 years of stories. Matthew Rosenberg gets the X-Men, and here’s to hoping that the soon to be superstar will have the opportunity to write these characters in some for for the rest of his career (get excited for his take on the New Mutants this spring!). Did I mention that THE JEAN GREY IS BACK? 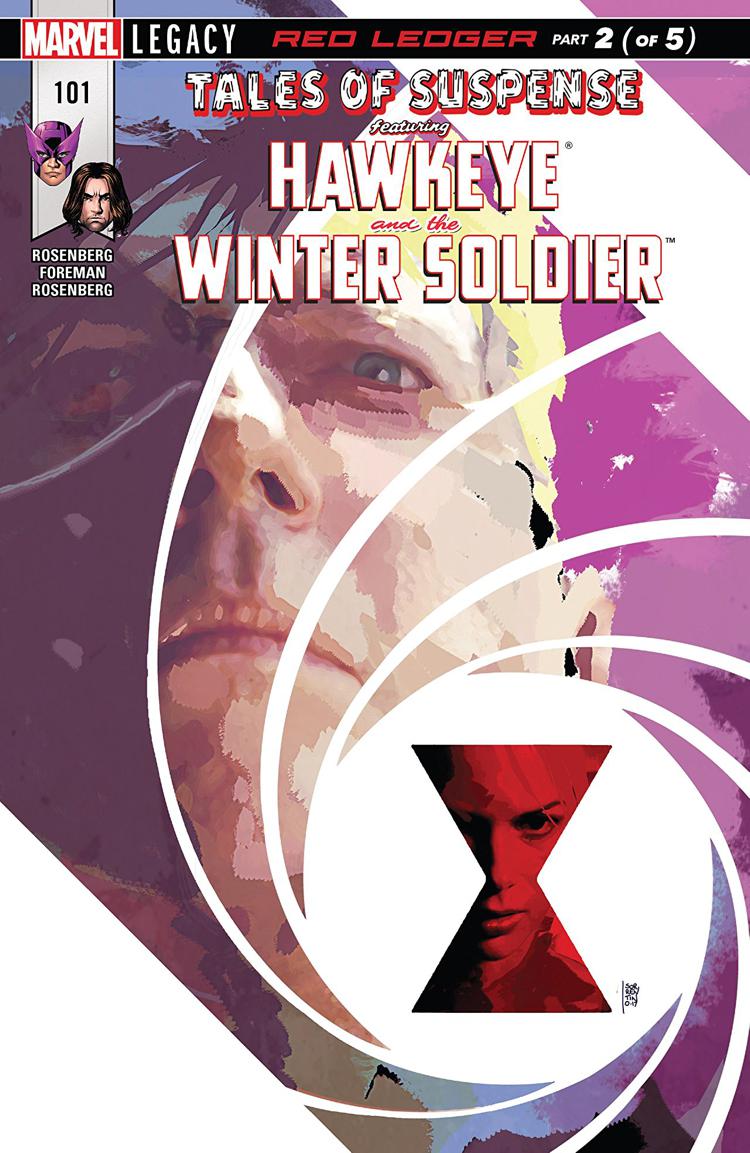 RED LEDGER PART 2
• HAWKEYE and BUCKY are forced to work together to track down the mystery assassin.
• The style and choice of targets have all led them to believe THE BLACK WIDOW is somehow alive and on the warpath…until now.
• When their latest victim surfaces, everything our heroes think they know is about to get blown to pieces!
• The titillating tale of Avengers, assassins, perilous plots and past mistakes continues here!

Why It’s Hot: Speaking of Matthew Rosenberg here he is making his second appearance on this week’s Hot Five. Tales Of Suspense #100 was a solid follow up to the events of Secret Empire that saw Black Widow presumed dead. Issue #101 looks to continue issue 100’s stellar debut with Clint “Hawkeye” Barton and James Buchanan “Bucky” Barnes on the case to find out what exactly is up with Black Widow. These two ex boyfriends of Natasha will need to find a way to work well together and get to the bottom of this mystery. Given that the reintroduction of this classic title is a nice tidy five issue mini featuring one of Marvel’s best writers, and an impressive art team in Foreman and Rachelle Rosenberg every Marvel fan should look into picking up this superhero spy thriller/buddy teamup.