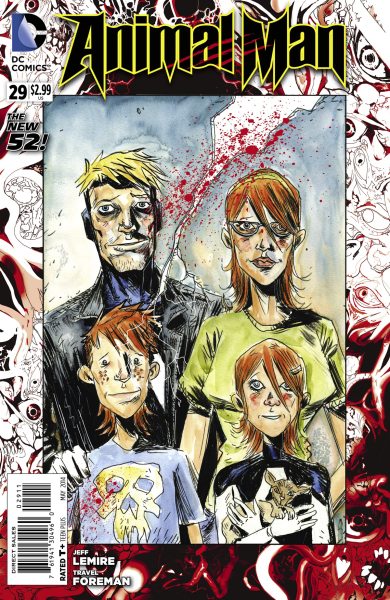 “I’ve missed these characters dearly, and I’m bringing them back with a vengeance.” – Scott Snyder

The story so far…

Pearl Jones is a new kind of vampire, one of an American breed that can walk in the sun and has rattlesnake fangs. She’s beautiful and powerful – and she’s hiding from a tragic past…
Skinner Sweet is an American vamp too – the kind you love to hate. He’s good when he wants to be, but most of the time he’s downright bad. He’s Pearl’s maker, but he’s off in Mexico with an agenda of his own…

Will their two stories collide, or are they separated forever? And who is this new villain on the horizon, someone bloodier and more evil than anything seen in AMERICAN VAMPIRE before? Who is THE GRAY TRADER and what does his arrival mean for Skinner and Pearl?

Whether you’re already a fan or interested in checking out this series, the extra-sized AMERICAN VAMPIRE: SECOND CYCLE #1 is the perfect jumping-on point!

Why It’s Hot: The book that put superstar writer Scott Snyder on the map returns with a special extra sized issue. The first volume of American Vampire came out of nowhere to be consistently one of the best comic books in the business each and every month. Over the past several years vampire stories have flooded the entertainment industry, but Snyder and Albuquerque’s take on bloodsuckers is at the very top of that list, and remains a must read. If you’re a fan then you’ve been counting down the days until the return of Pearl and Skinner, and that day is almost upon us. For those of you planning on using this natural jumping on point to make this your first issue, enjoy the ride! 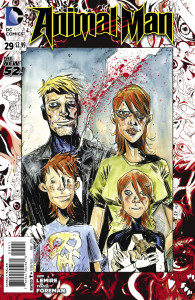 A special finale to Jeff Lemire’s run on the series by the creative team that launched Animal Man in The New 52! What is left of Buddy in the wake of “Evolve or Die”?

Why It’s Hot: From the start of The New 52 back in September of 2011, Animal Man has been one of the most critically celebrated books in the DC library. Now with writer Jeff Lemire launching the new Justice League United and bringing Animal Man along for the ride, it’s time to say goodbye to Buddy’s solo series. Join the creative team that kicked the series off twenty-nine issues ago as they wrap up this chapter of Buddy Baker’s life.

BECAUSE YOU DEMANDED IT!

Join Marvel’s fearless hero as he begins his most awe-inspiring adventure yet in the sunny city of San Francisco! Gifted with an imperceptible radar sense and a passion for justice, blind lawyer Matt Murdock—a.k.a. DAREDEVIL—protects the Golden City’s streets from all manner of evil. But big changes are in store for Matt Murdock as old haunts and familiar faces rise to give the devil his due. Hold on tight, because here comes Daredevil…the Man Without Fear!

Why It’s Hot: Daredevil goes west! The superstar creative team of Mark Waid and Chris Samnee continue their near universally renowned run on Daredevil with a new direction so big that Marvel decided to relaunch the book! Matt Murdock has left Hell’s Kitchen and has headed out to his old San Francisco stomping grounds. What will California have in store for Daredevil this time around? There is only one way to find out! Be there as Waid and Samnee’s historic work with “The Man Without Fear” continues.

• As seen in the New York Times, CNN and other media outlets the world-over, the all-new Ms. Marvel has made her thunderous debut!

• Kamala Khan’s very ordinary life has suddenly become extraordinary. Is she ready to wield these strange and immense new gifts? Or will the weight of the legacy before her be too much to handle?

Why It’s Hot: After a first issue that left everybody talking, Ms. Marvel is just getting started! Growing up is hard enough as it is, and in the Marvel tradition, the discovery of her new powers will just make things more complicated for Kamala Khan. How will she balance home, school, and the life of a superhero? Writer G. Willow Wilson has already shown in one issue that she was up to the task of writing a Muslim teenage girl, and all of the cultural intricacies that come with it, and artist Adrian Alphona proved that he is the perfect artist for this book. Now with the bombshell origin of the new Ms. Marvel’s powers, life is only going to get more complicated for Kamala. It’s not too late to jump on the book that comes closer than any book in recent years to matching the feel of the classic early days of Peter Parker and Spider-Man. This comic book is what Marvel Comics is all about.

The Large Hadron Collider. Edward Zero’s newly gained knowledge. A man with a plan to end the universe so a better one can be born.

They all connect here.

Why It’s Hot: Writer Ales Kot is one of the fastest rising stars in the business, and Zero is a big reason why! With the release of Zero vol. 1 last month for $9.99 and the news that a tv show is being developed, there’s no time like the present to get caught up with one of the biggest surprises of the past year! For those of you already on board, there’s no need to tell you why Zero is hot hot HOT!