•  Millions of fans have climbed aboard the “wildest ride in the wilderness”-and now Marvel hurtles you through the mists of time to reveal the never-before-told saga of how the dangerous gold mine of Big Thunder Mountain became the haunted legend it is today!

•  Malevolent mine owner Barnabas T. Bullion is determined to shelter his teen daughter Abigail from the dangers of the Wild West, but this brave young hero has other ideas…which include robbing her own father’s mine as a masked bandit!

•  Earthquakes! Floods! Dynamite-chewing goats! Can the denizens of Rainbow Ridge survive the clash between mankind’s greed and nature’s fury? And what is the protective power that dwells deep within the mysterious mountain? Surprises await you in the latest Disney Kingdoms saga by the acclaimed duo of Dennis Hopeless (Spider-Woman) and Tigh Walker (Avengers Undercover)!

Why It’s Hot:  For the most part Disney owning Marvel hasn’t resulted in an onslaught of comic books featuring Disney properties. Sure it helped lead to the return of Star Wars to the publisher, but other properties have been far & few between. The first attempts to give a comic book to Marvel characters/attractions were the Secrets of the Weird, and Figment miniseries. The latter was a surprising success creatively. Living in Southern California, frequenting Disneyland, and being a fan of westerns, I was always enthralled by Big Thunder Mountain Railroad. Now they put together an exciting creative team to tell the attraction’s previously unknown back story, and when looked at in conjunction with he previous miniseries there’s a level of excitement that wasn’t expected.

SHOWTIME, SYNERGY! Meet JERRICA BENTON-a girl with a secret. She and her sister KIMBER team with two friends to become… JEM AND THE HOLOGRAMS! But what does it mean to be JEM today? Fashion, art, action, and style collide in the most outrageous comic of 2015!

Why It’s Hot: I’m not sure just how many people have been clamoring for the return of The Holograms in recent years, but these people must have been loud because not only are we getting a new live action movie, but a brand new comic series! With a great all female creative team turning out an impressive first issue for women, men, and children of all ages, the girl power is strong here. I can’t personally say I wanted more from this property, but I’m thankful that others did, because this is a fun comic book. It’s time for a brand new generation to be introduced to the coolest fictional cartoon girls band around (Sorry Josie)!

Iconoclastic creators Joe Casey and Jim Mahfood turn the world of Miami Vice on its head in a way that’s got to be seen to be believed! Detectives Sonny Crockett and Ricardo Tubbs are taking on crime in a city rampant with danger at every turn! An ’80s classic is now a Lion Forge reimagining for a bold, new audience!

Why It’s Hot: Joe Casey + Jim Mahfood + Crockett & Tubbs = Not your daddy’s Miami Vice. This is not the type of book you often see from licensed properties, and that is he highest compliment possible. If you are a fan of either creator this is a must buy. Casey and Mahfood do not hold back here, and the results are mayhem. If you aren’t fans of the creators, because you haven’t been exposed to their work this book is still worth checking out to see if it fits your taste. Not going to lie, now I’m excited to see what Lion Forge has in store for Saved By the Bell. 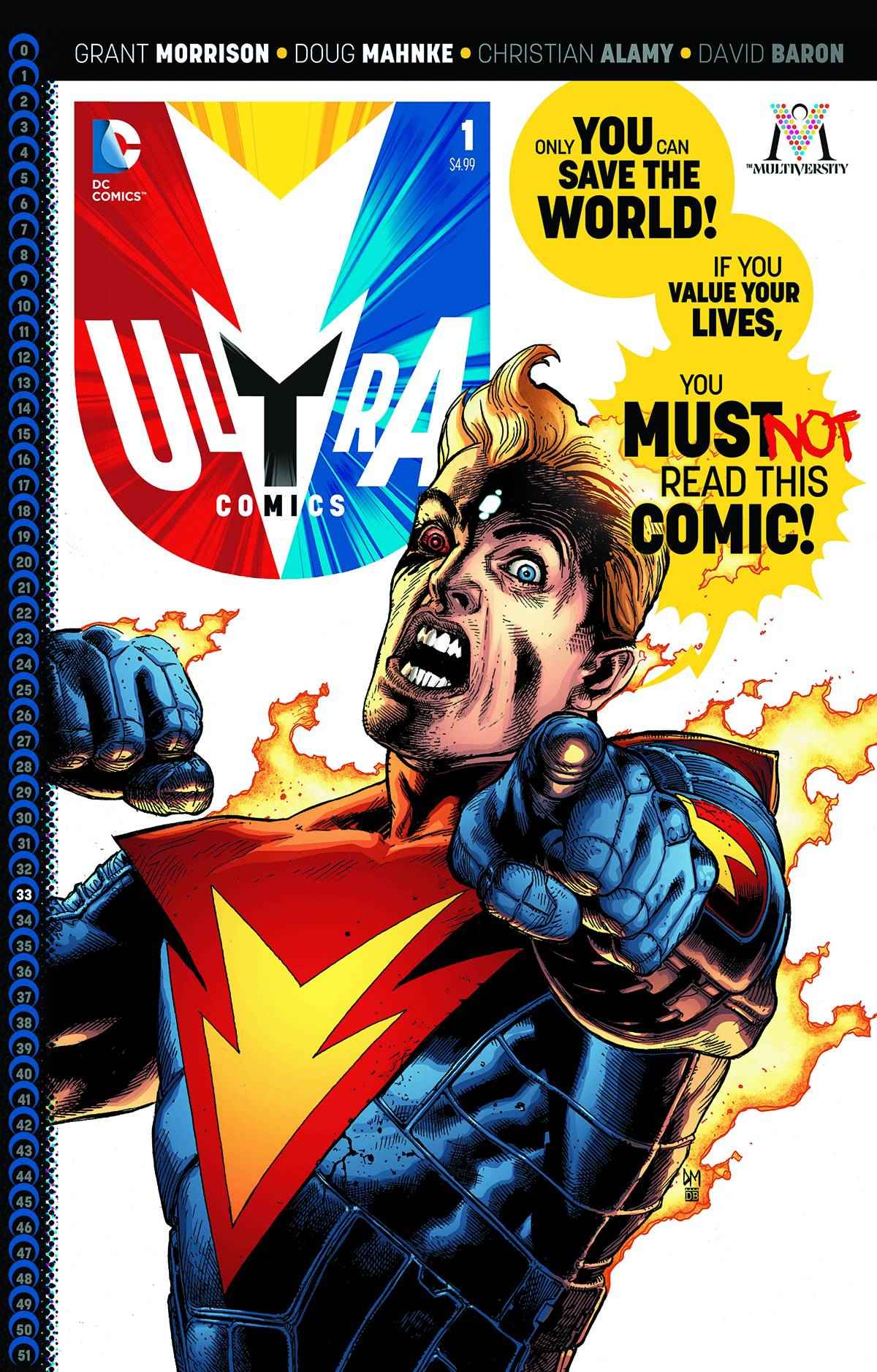 The penultimate chapter of the greatest adventure in DC’s history is here!

The acclaimed FINAL CRISIS team of Grant Morrison and Doug Mahnke reunite for a story so big it could only take place in the real world – that’s right, Earth-33 is back!

With the Multiverse under attack, a team of scientists create one final savior to take on the otherworldly threat…and its name is Ultra Comics! Literally held in your hands, one being will attempt to halt the annihilation of creation – and you, the reader, will have a front-row seat as you become an integral part of the resistance!

It’s another exciting, experimental story told by two of today’s top creators! You won’t want to miss this exciting issue which acts as chapter eight of THE MULTIVERSITY storyline.

Why It’s Hot: Grant Morrison’s Multiversity epic is almost complete, and in this penultimate issue he breaks the 4th wall in telling the story of Ultra Comics. The series has been great, and Morrison is at his best when telling mind ending stories, and this promises to be just that. I mean come on, you, me and everyone other reader apparently are the stars of the issue, how can that not be considered hot? 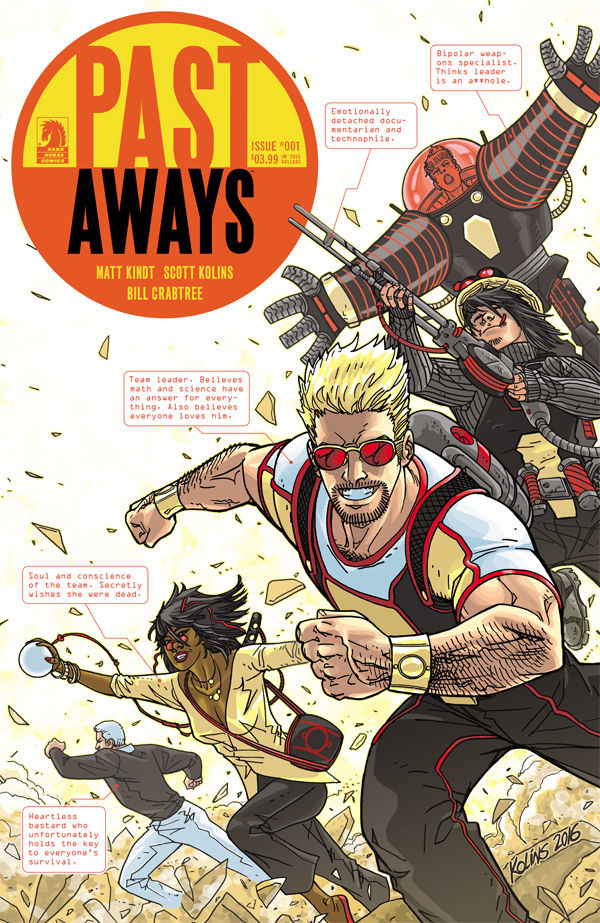 2015: the distant past. A crash landing strands five deep-time explorers in a primitive world of internal-combustion engines and Internet 1.0 and tears a rift in space-time that spouts dinosaurs, giant robots, and other strange phenomena! Only the marooned “PastAways” can defend the twenty-first century, unless the tensions of their unexpectedly prolonged mission tear them apart!

Why It’s Hot: Time travel is all the rage these days, and it appears we have another winning concept on our hands. Matt Kindt, who seems to be making an awful amount of Hot Five appearances lately, is joined by the great Scott Kolins for a high concept sci-fi romp that will end up being one hell of a ride.