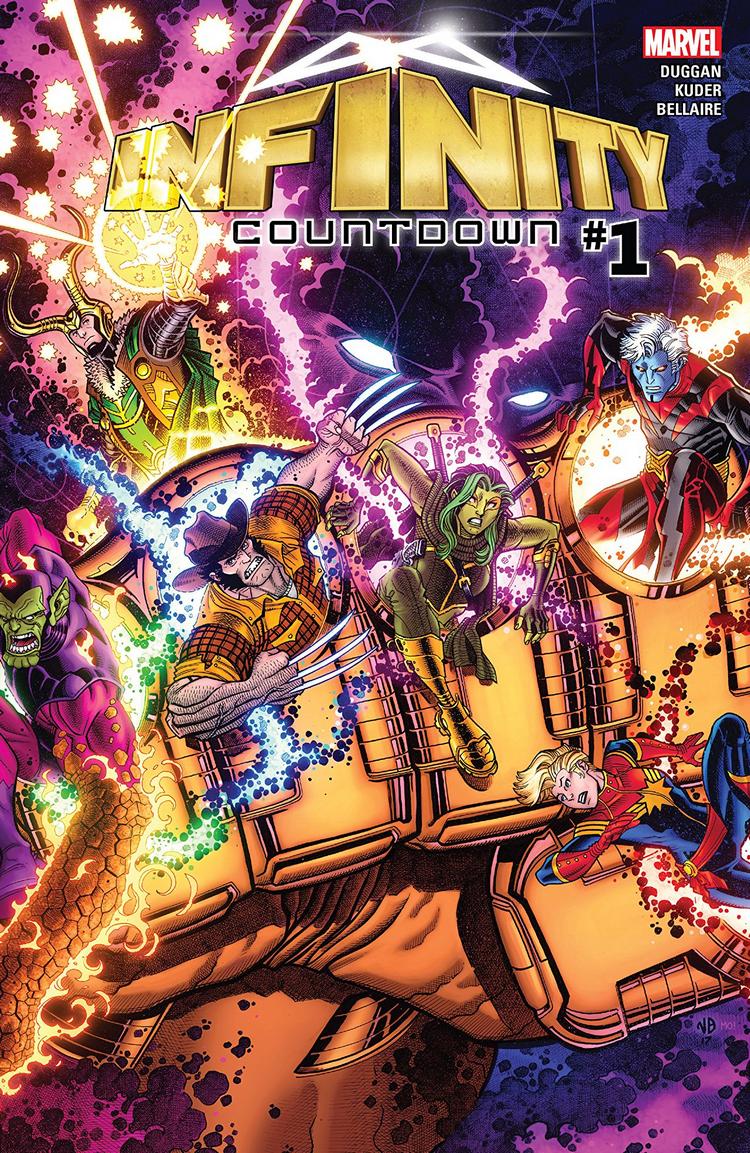 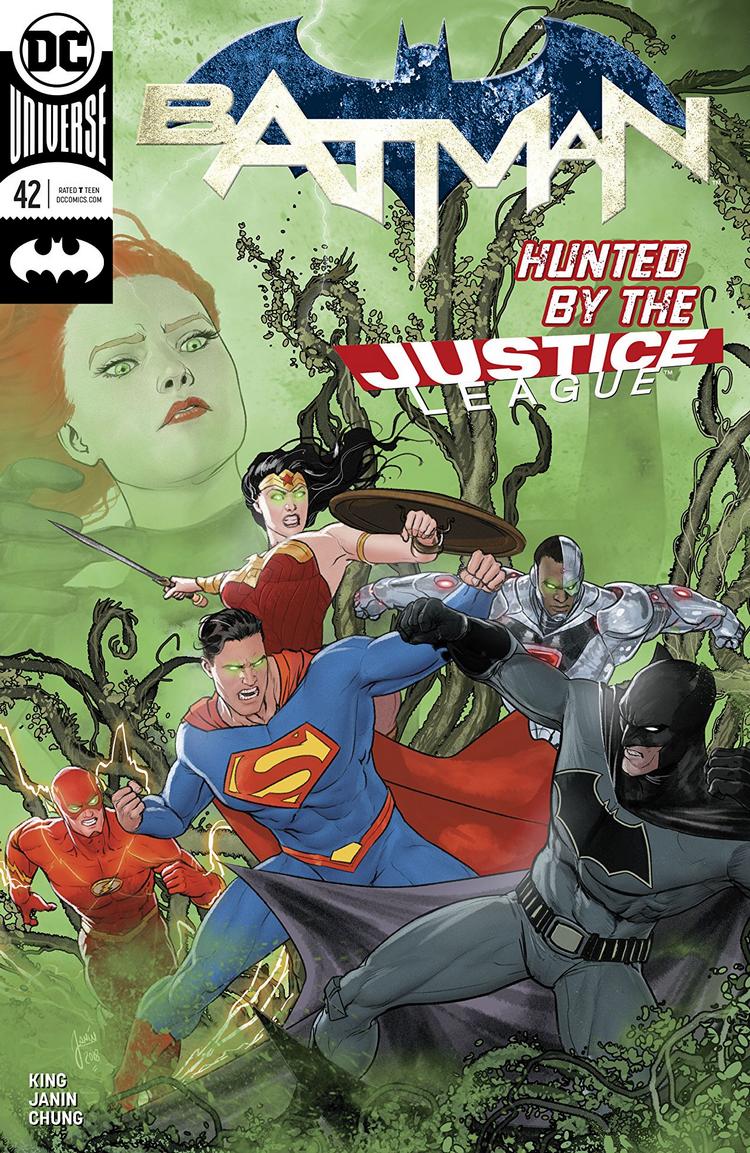 “Everyone Loves Ivy” part two! Poison Ivy has taken control of every man, woman and child on the planet, and only Batman and Catwoman have escaped her influence. But will the pair of them be enough to nip this in the bud?

Why It’s Hot: All of these great comics this week and Batman finds itself in the Hot Five yet agan? Well I promised that as long as Tom King and his creative partners being the goods they will have a spot on this list every other week, and oh do they bring the goods. Everyone Loves Ivy has turned up the classic complicated villainess’ powers up to levels never seen before. The result has already seen some of the absolute coolest Poison Ivy moments. I mean that scene with The Flash from part one alone put Ivy into the upper echelon of DC villains. All of this while she continues to be one of the most conflicted and complicated baddies in all of auperhero comics. All of that continues here, and you can expect some brutal pages, tie-ins to previous arcs, answers, and some of that sweet, sweet Mikel Janin art that has made him one of the best in the business today. 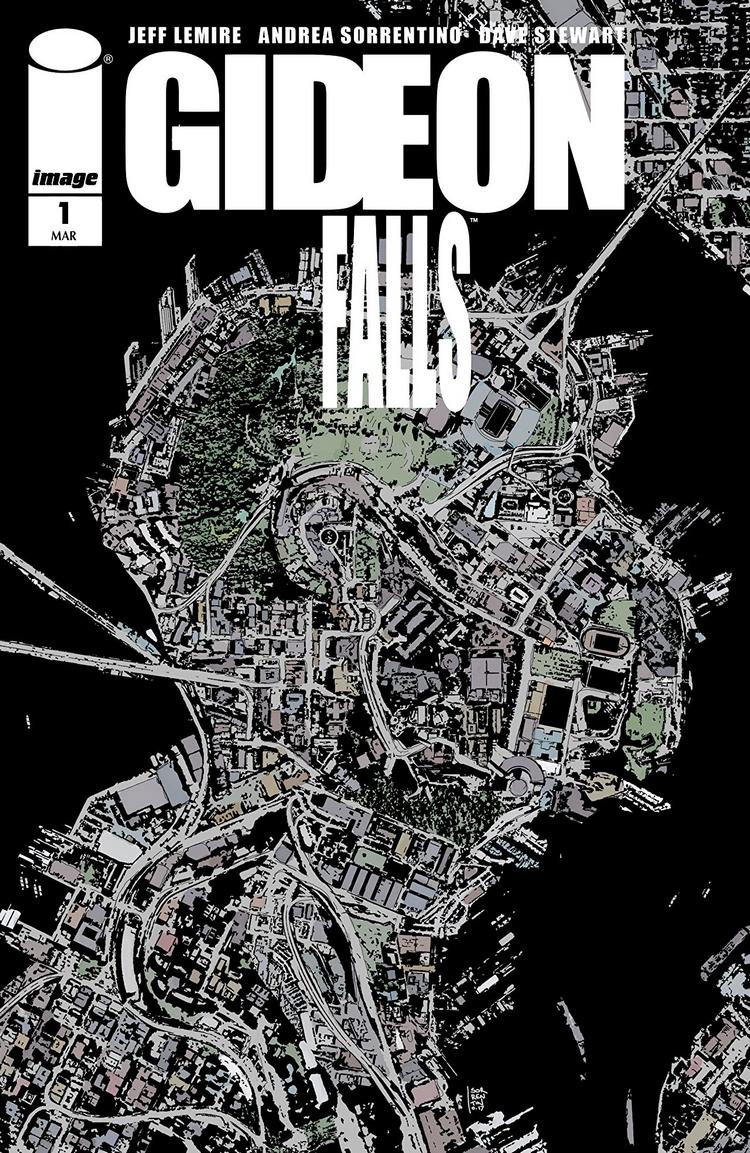 A brand-new ongoing series from the acclaimed bestselling creative team of Old Man Logan and Green Arrow! The lives of a reclusive young man obsessed with a conspiracy in the city’s trash, and a washed-up Catholic priest arriving in a small town full of dark secrets, become intertwined around the mysterious legend of The Black Barn, an otherworldly building that is alleged to have appeared in both the city and the small town, throughout history, bringing death and madness in its wake.

Rural mystery and urban horror collide in this character-driven meditation on obsession, mental illness, and faith.

Why It’s Hot: Jeff Lemire and Andrea Sorrentino together again. They were great together on Green Arrow for DC and Old Man Logan for Marvel. Now they’ve taken their beautiful partnership to the creator owned world with Gideon Falls. This comic will continue to show just how great these two work together and that Sorrentino can do horror just as well as his signature unqiue action layouts. Two of the best creators in comics who happen to be one of the best creative teams when working together are putting out a new comic. I’m sorry, it’s a must buy. 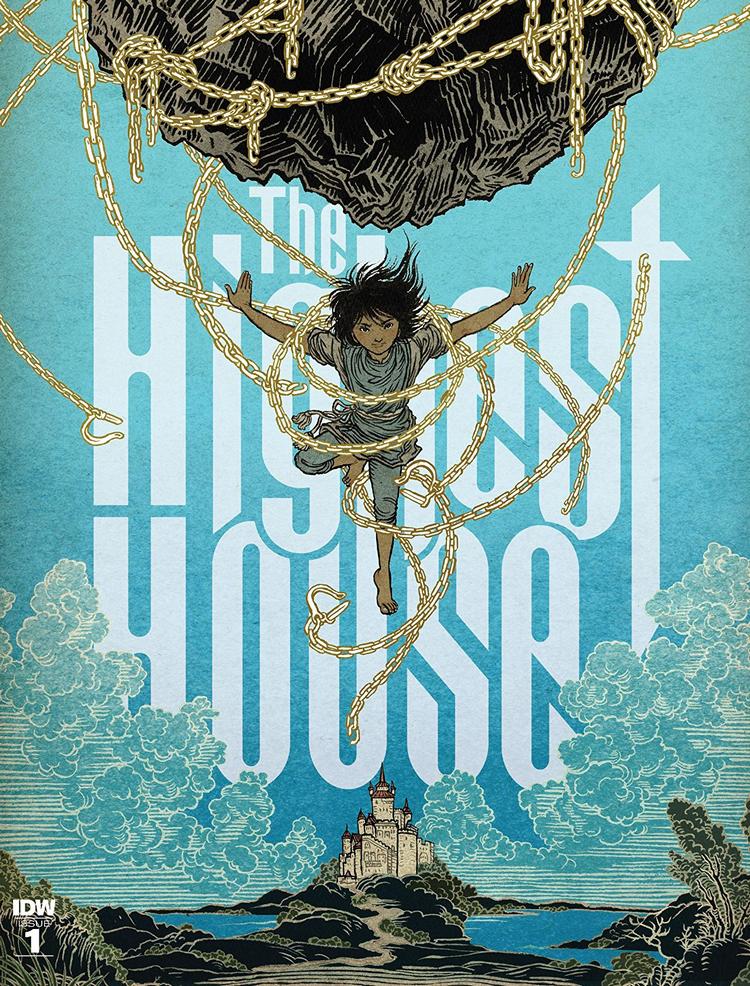 The creators behind the Hugo Award-nominated The Unwritten, Mike Carey and Peter Gross, invite you into The Highest House, the story of a slave boy named Moth, who makes friends with a powerful entity called Obsidian that promises advancement and happiness. Clearly, Obsidian has a hidden agenda, but Moth has ambitions and plans of his own…
Series covers by award-winning illustrator Yuko Shimizu!

Why It’s Hot: The Highest House could very well end up as the the best comic IDW publishes. The creative team certainly has the skills to make it so, as The Unwritten creative team of Mike Carey and Peter Gross have been reunited for this new fantasy series. In a dense, extra sized first issue readers are introduced to a slave boy named Moth is more than he appears to be. The comic is beautiful from the covers by Yuko Shimizu to the pitch perfect art of Gross, whose work standsout wonderfully in the fantasy genre. You can see glimpses of potential greatness on every single page, and when the buzz builds you’ll want tombs able to say you were there from the beginning.

The Saga of the Infinity Stones begins!
As the Infinity Stones reappear around the cosmos, the ultimate race for power is on!! Battles will be fought, blood will be spilled, lives will be lost… all as the greatest cosmic heroes and villains vie for possession of the Power Stone, towering over a remote asteroid, somehow grown to the size of a building. Watch as the path to Infinity opens before your eyes and the END lies near…

Why It’s Hot: Gerry Duggan’s run on All New Guardians Of The Galaxy is the other side of the same cosmic coin as Dan Slott and Michael Allred’s Silver Surfer. While the latter felt like a more personal take on that character, Duggan has run wild on Marvel’s cosmic side of the universe. It was hands down the best take on the characters since Abnett and Lanning’s take. Then the build to this event and the search for the Infinity Stones in All New GoTG has been the best the cosmic side of things have been since War Of Kings, Its a shame sales dropped so much after Bendis’ run because this really was must read material. Duggan, Kuder, and several top notch artists along the way have been building towards this mini or “corner” event for months. This issue will show those that haven’t been reading what they’ve been missing out on while tying up story threads and expanding the story to other corners of the Marvel Universe for the rest of us. There are multiple big moments that will make you cheer, and a last scene that references a classic issue while introducing a new player to the hunt. 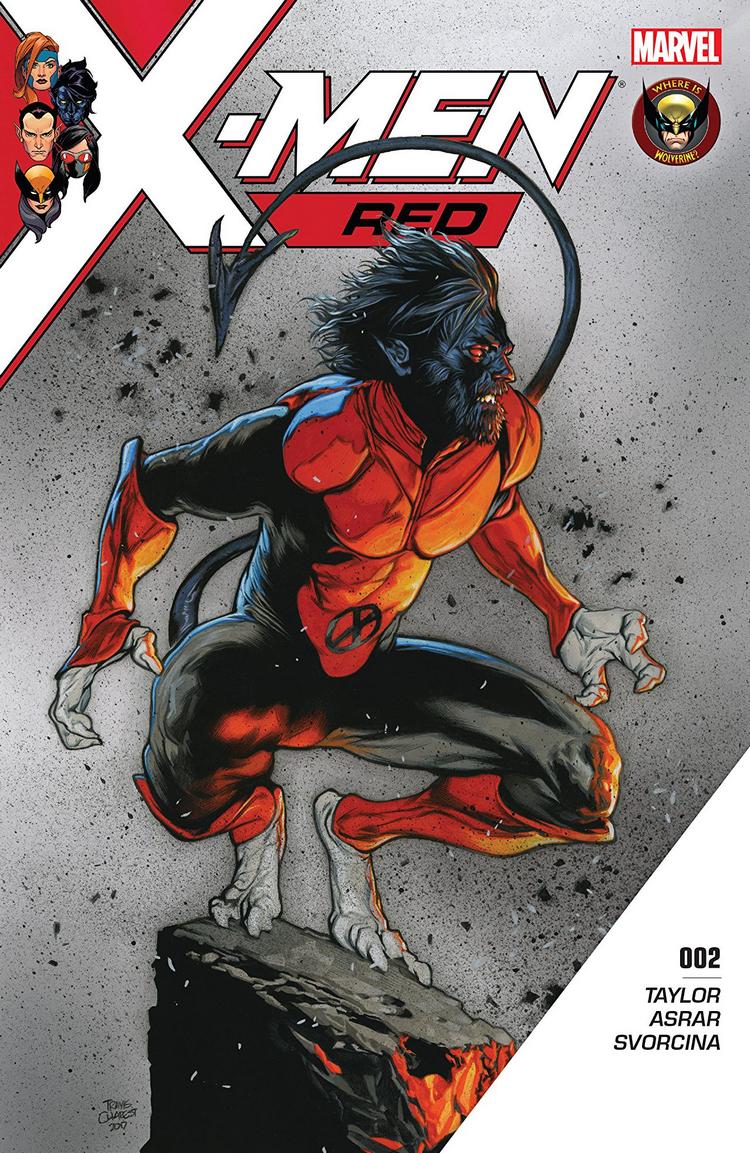 THE HATE MACHINE Part 2
• JEAN GREY and her team must infiltrate a top-secret compound in order to save a mutant they’ve never met.
• They’ll have to avoid guards armed with guns, protestors armed with hate and sentinels armed with…well, slightly larger and more dangerous guns than the guards.
• All in a day’s work for the newest X-Men team.

Why It’s Hot: After just one issue X-Men: Red has quickly become the hottest x-book around. How will Taylor follow up on a first issue that introduced us to Jean Grey’s dream, a new team of X-Men, and the deadly return of a major villain? How about a jailbreak, and introduction of the team’s newest member sound? 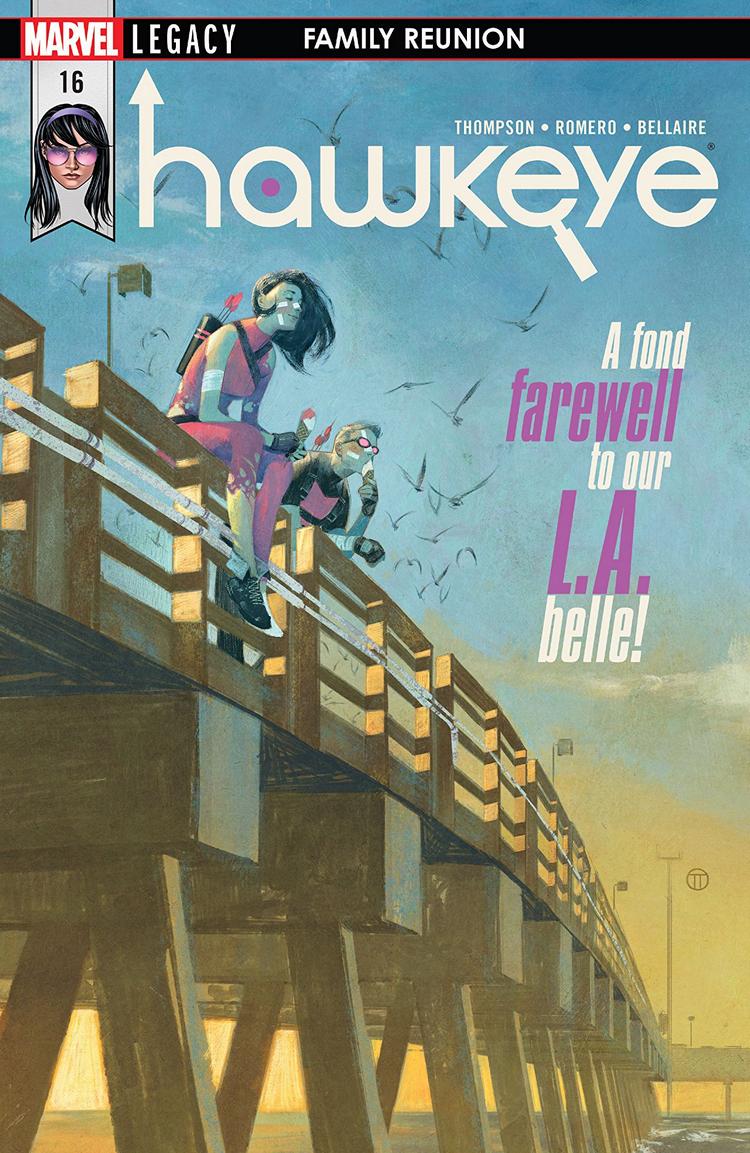 • As Madame Masque, Eden and a crew of misfit villains take on Hawkeye and Hawkeye with renewed vengeance, our heroes dig deep into themselves to solve the unique challenges they face.
• Arrows can’t solve EVERYTHING, it seems. Who knew?!
• When the dust settles, what will the future hold for the two Hawkeyes?

Why It’s Hot: For almost fifteen years fans wanted to see Kate Bishop in her own series. The wait was long, but the creative team of Kelly Thompson, Leonardo Romero, and Jordie Bellaire lived up to the high expectations and delivered more than we could have ever hoped for (outside of another 100 issues). As Thompson continues her rise through the ranks as one of Marvel’s best writers, and Romero gets set to replace Chris Samnee on Captain America for Mark Waid’s final arc we will look at Hawkeye several years from now as the comic that launched these two creators to the moon. This comic will be their launching pad to greatness, and one day we will celebrate them reuniting for a project. Until then, thank you two, Jordie Bellaire, and everyone involved for a great comic that not only followed in the footsteps of classic Hawkeye runs but walked side by side with them.

* Amazing Spider-Man #797 – Dan Slott’s final arc on the series he has been writing for years starts here. It’s the end of an era and there’s no doubt Slott will go down swinging!
* Assassins Creed: Origins #1 – Assassins Creed Origins is one of the best games in popular franchise and this comic looks to follow suit in quality.
* Assassinistas #3 – You really should be reading anything IDW is putting out under Shelly Bond’s Black Crown imprint. This is one of them, and is really good stuff,
* Avengers #683 – The Incredible Hulk is dead! Long live The Immortal Hulk!
* Black Lightning: Cold Dead Hands #5 – The penultimate issue of the miniseries that has turned the heads of everyone that is reading it is here. Writer Tony Isabella returned to his most famous creation and helped come up with one of the best and most important superhero comics currently on the racks.
* Bloodshot Salvation #7 – A comic that takes place completely in the dark? How does that even work? Find out here!
* Captain America #699 – Steve Rogers is a man out of time once again, as we move within one issue of the big 700th anniversary bash
* Deathstroke #29 – Chinatown comes to an end, as Priest continues to prove that a Deathstroke ongoing is not only viable but can be amazing,
* Dejah Thoris #2 – Amy Chu and Pasquale Qualano look to,build upon their solid debut issue starring everyone’s favorite Princess Of Mars
* Doctor Strange: Damnation #2 – The new Midnight Sons enter the battle for the soul of Las Vegas
* Dodge City #1 – BOOM! Studios already has a book about fencing, and now add one about competitive dodgeball. As expected from the publisher these days, the results are really good.
* Exit Stage Left: The Snagglepuss Chronicles #3 – This series is special. You should be reading this series if you aren’t. It is another example of how powerful the Hanna Barbara license can be in the right hands,
* The Fix #11 – It’s been way too long since we’ve had an issue of this series. Are you ready for the wackiness?
* Green Arrow #38 – Benjamin Percy’s multiyear run comes to an end here!
* Green Hornet #1 – Fan favorite Amy Chu takes over the franchise and introduces us to a brand new Green Hornet
* Iceman #11 – The end is here for Bobby Drake’s first solo ongoing (or would this be considered a maxiseries?
* Justice League #40 – As attention begins to shift towards Scott Snyder taking over the title,in a few months time let’s not lose sight that Priest is turning out a damn good mini run that continues here.
* Oblivion’s Somg #1 – Invincible may have just ended but Robert Kirkman is just getting started, as the superstar writer and TV producer has found time to launch an intriguing new series.
* Rise Of The Black Panther #3 – Did you see that movie? Do you want more T’Challa? Do you want to see him in his early days as the Black Panther? Well, this comic is for you.
* Rogue & Gambit #3 – Kelly Thompson writes these two title characters like she was born to, and this is an important part of the X-Men’s current renaissance.
* Shade The Changing Woman #1 – Post Milk Wars Young Animal relaunch commence!
* The Shadow/Batman #6- The phenomenal Dynamite/DC crossover between The Shadow and The Dark Knight reaches its conclusion. Let’s hope we see more of this pairing,mfrom this creative team in the future.
* Superman #42 – Am no excited for Boyzarro as Tomasi and Gleeson begin all time bad run.
* Venom #163- The Poison X crossover with X-Men: Blue concludes!
* The Wicked + The Divine #34
* The Wild Storm #12 – Warren Ellis continues to do Warren Ellis things as his fresh take on the Wildstorm characters continues. Why aren’t we talking about this comic more
* X-Men Gold #23