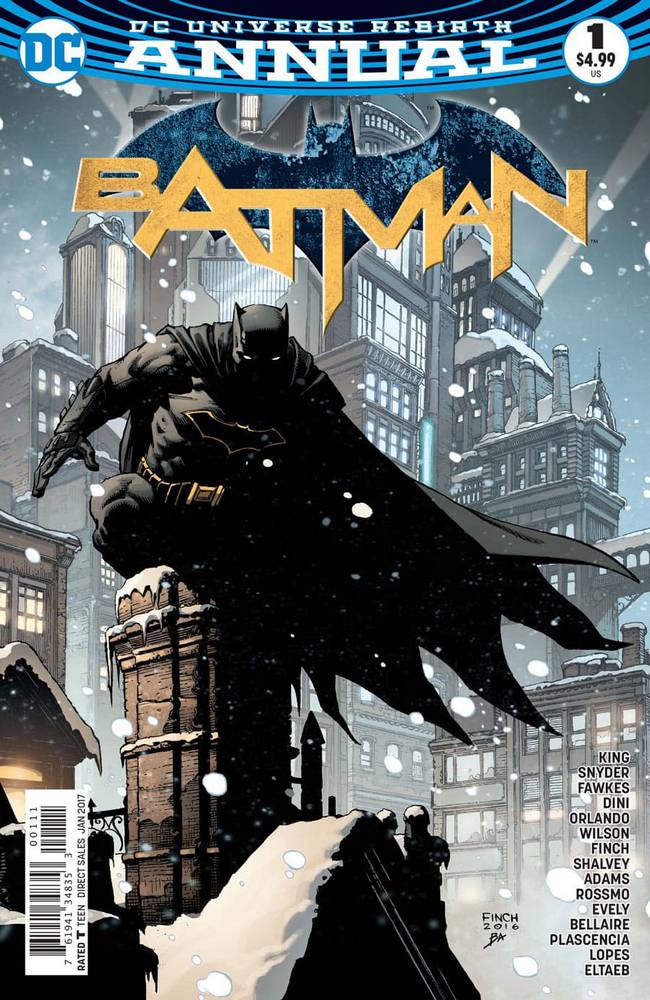 “SILENT NIGHT”! A hush of winter snowfall has fallen over Gotham City…but a quiet night in this place is never truly quiet. Batman and his allies-and his many foes-stalk the streets in this icy showcase of top talent.

Why It’s Hot: It’s the end of the month, and that usually means we are in store for a slower week than usual. This is especially true on the fifth Wednesday’s of the month. “Fifth Weeks” are chalk full of annuals and rescheduled issues. This issues are often forgettable in the long run, but DC has made sure this isn’t the case with Batman by assembling an all star creative team to contribute. Just look at the names involved, and try to tell me you aren’t more excited than usual for an annual. I’m willing to bet you can’t. 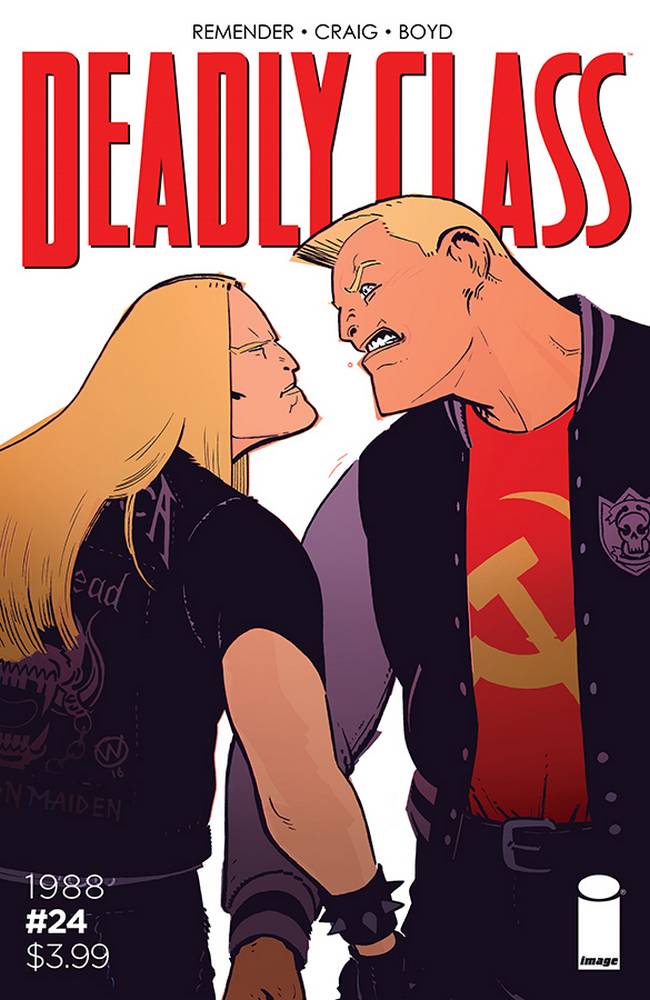 Saya loses her flock of new wards, only to find them again surrounded by a Little Tokyo Yakuza kill crew.

Why It’s Hot: A few issues back Remender, Craig, and the rest of the creative team made a pretty dramatic shift in the status quo for the kids of King’s Dominion as they entered their second year. I was even left wondering where the story could go from there. Well I was foolish for doubting, because this comic is still one of the absolute best around. There are very few comics that deliver each and every month like this one. 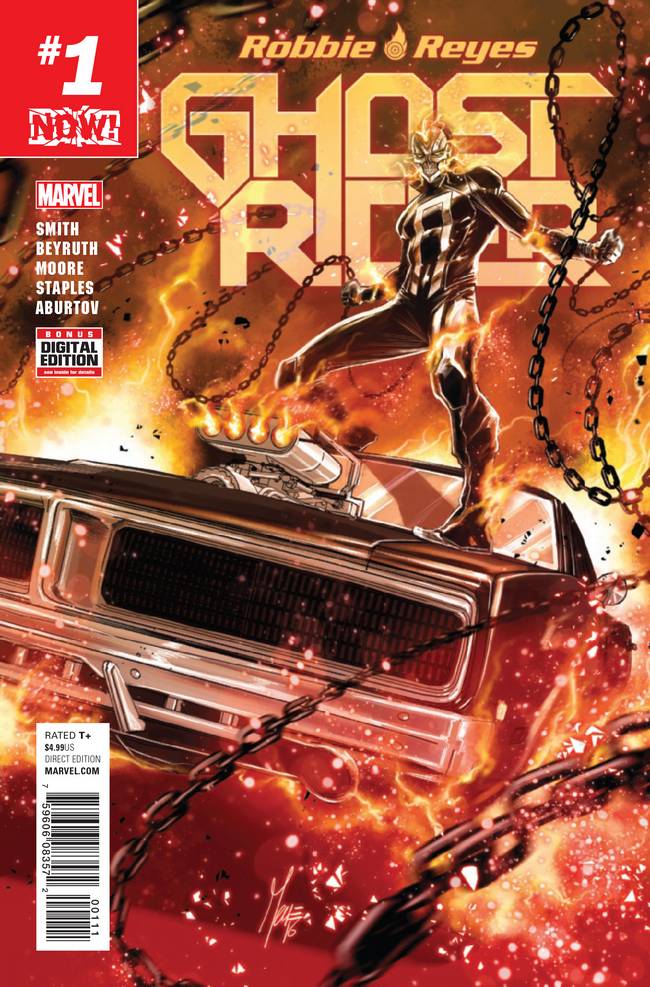 ROBBIE REYES IS BACK!

It’s hell on wheels as the Spirit of Vengeance makes his roaring return! A mysterious object from space crash-lands in southern California, drawing some of the brightest minds in the Marvel Universe to Ghost Rider’s backyard – including Amadeus Cho, the Totally Awesome Hulk! What mayhem will be unleashed as the High-octane Hothead comes face-to-face with the Jade Genius? And with Robbie still possessed by the ghost of his evil uncle Eli…who’s really in the driver’s seat? Then, meet the newest speed trap in Ghost Rider’s life as his original creators Felipe Smith and Tradd Moore reunite for a special backup story and the debut of an all-new villain. Strap in and start your engines, True Believer, this one’s gonna be a scorcher!

Why It’s Hot: Robbie Reyes has taken the TV world by storm, and now he makes his triumphant return to Comics with his brand new ongoing series. The last series starring Robbie was one of the most underrated Marvel books of the past several years. Hopefully the characters newfound exposure on Agents of SHIELD will lead to more success for Ghost Rider this time around. 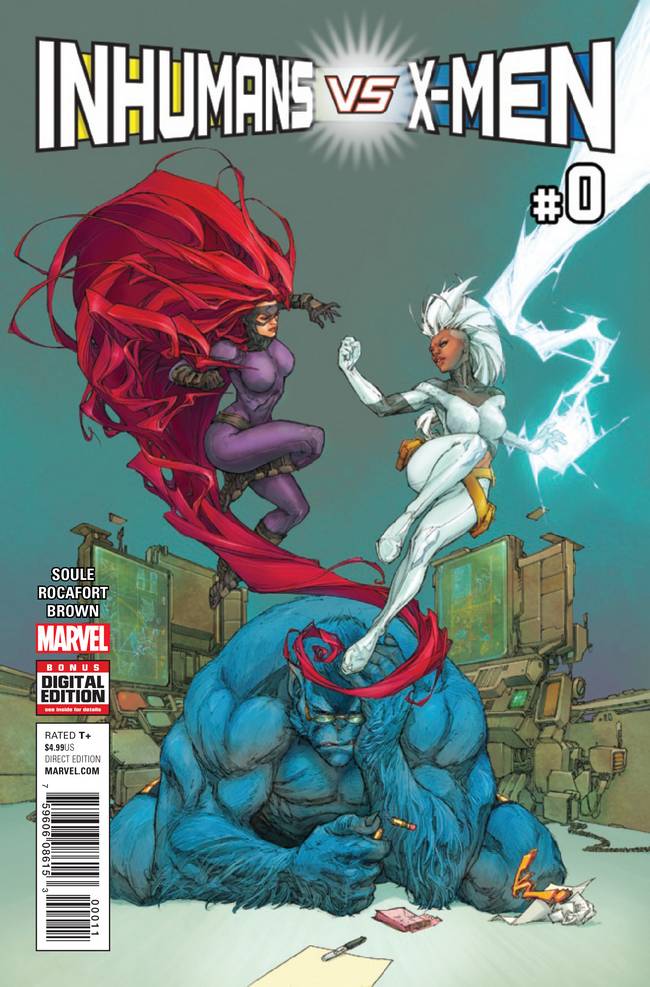 This issue sets the stage for the upcoming Inhumans vs. X-Men mega-event! Learn who the major players will be, plus the seeds of the incredible plan that will unfold in IVX #1. Beast and Iso travel the world to learn a desperate truth, the X-Men assemble their ranks and the Inhumans prepare for the war to come. It all begins with one choice – see it here.

Why It’s Hot: Fans have been waiting months and months for the Inhumans to go toe to toe with the X-Men. That time is now! While not the beginning of the story proper, this zero issue will give readers who might not have been reading either set of titles all the pertinent information heading into Marvel’s big Winter event. For the rest of us, Kenneth Rocafort’s artwork is going to be worth the price of admission. • At the funeral of Roberto Da Costa, Advanced Idea Mechanics is declared officially dead.
•  In the wake of their ultimate mission, the New Avengers reassess their lives…and one of them hangs up their costume for good.
•  What could possibly follow this?

Why It’s Hot: The final issue before USAvengers begins! New Avengers has hands down been one of Marvel’s best titles over the past year, and it’s going to be interesting to see what storylines get wrapped up in this issue while laying the groundwork for what comes next. If you haven’t been reading this series, you should go back and get caught up. Not only is it one of the best superhero comics around, but it’s going to be important to one of the bigger Marvel NOW! launches.