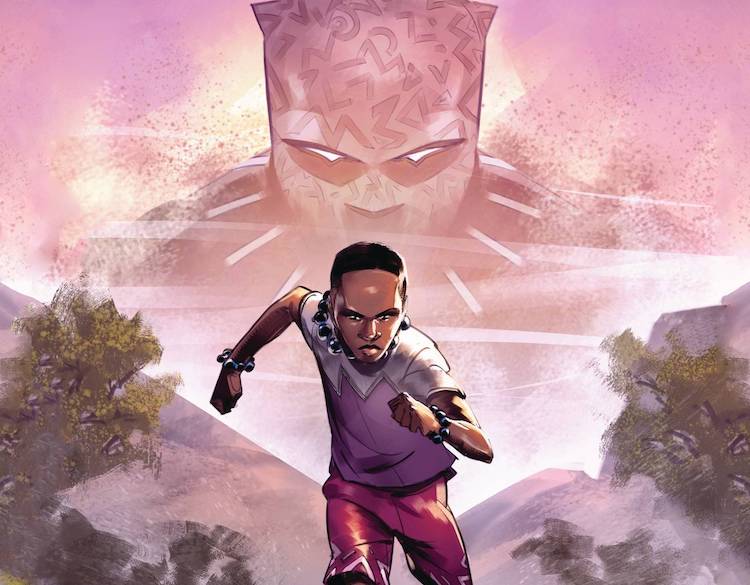 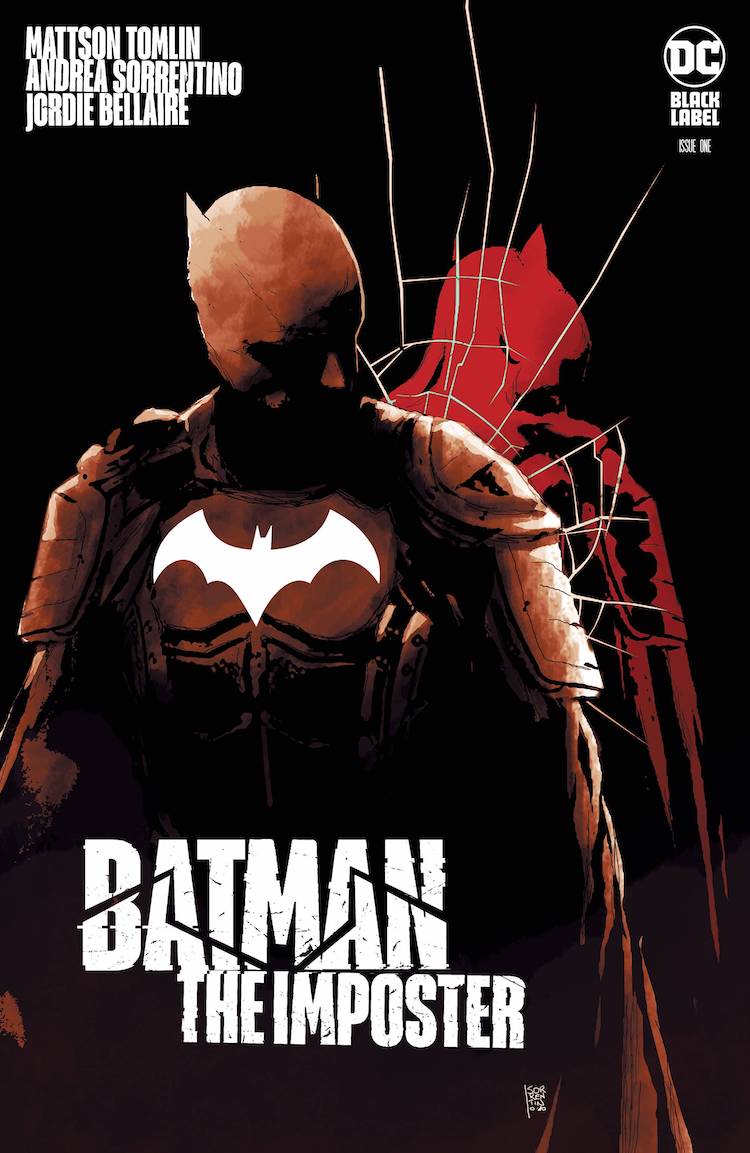 Bruce Wayne’s mission as the Batman has only been underway for a year or so, but he can tell he’s making a difference. Unfortunately, he’s made some powerful enemies. All the traditional power brokers of Gotham resent the disruption the Batman has brought to town…and it seems one of them has a plan to neutralize him. There’s a second Batman haunting Gotham’s rooftops and alleys—and this one has no qualms about murdering criminals, live and on tape. With the entire might of the Gotham City Police Department and Gotham’s rich and powerful coming down on his head, Batman must find this imposter and somehow clear his name…but how can you prove your innocence from behind a mask?

Why It’s Hot: This is a really good Batman comic, and one that might just give us a taste of what we have to look forward to when The Batman hits theaters around the world next year. Writer Mattson Tomlin is making his DC Comics debut after helping Matt Reeves shape Gotham for the big screen, and his comic career is off to a great start. It’s strange to call or refer to a Batman story as more grounded or gritty than others, but Batman: The Imposter feels that way with a more realistic approach to Batman and Gotham City, Then when you add a superstar artist like Andrea Sorrentino to the mix and you have the beginning to what could be the best Batman comic in a long time. I can see this ending up as one of those evergreen Batman comics that are considered stand alone classics. Do yourself a favor and give this title a shot this week! 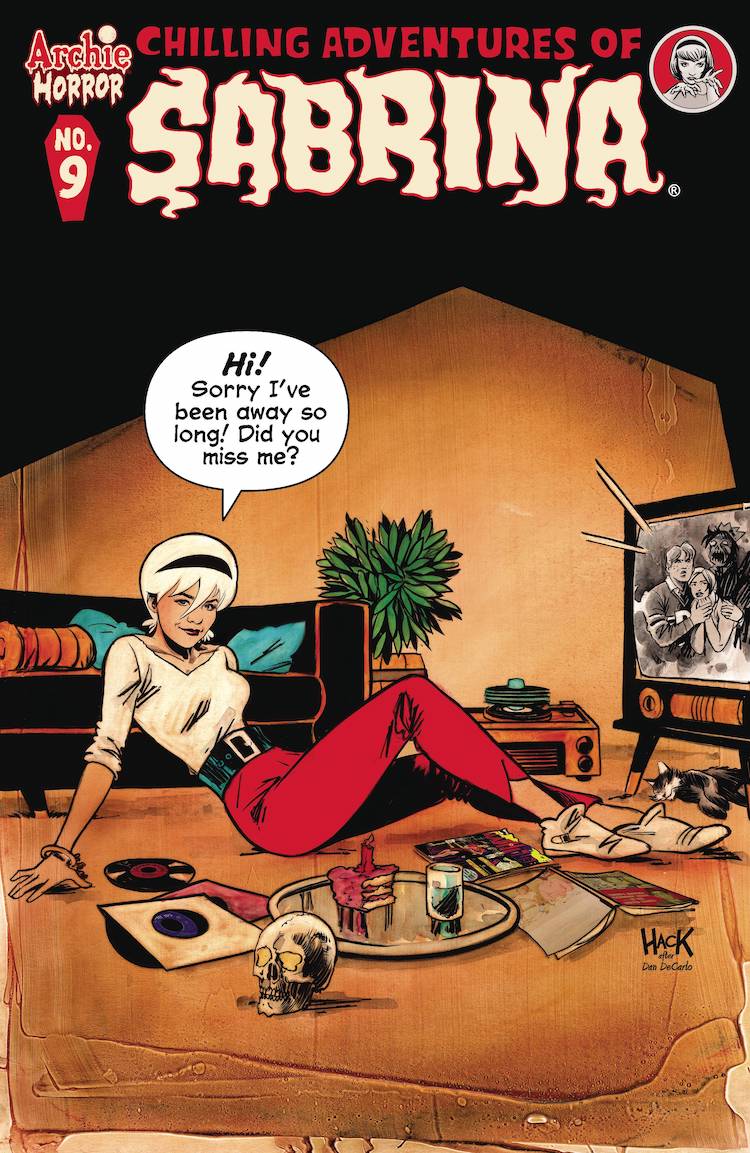 THE HIT HORROR SERIES THAT SPAWNED A MASSIVELY SUCCESSFUL NETFLIX SERIES RETURNS! “WITCH WAR” Part 3: “The Sacrificial Lamb” – Sabrina has brought Harvey’s body back to life (along with her father’s soul). But there is a cost to everything. Unless she wants the Gates of Hell to open, Sabrina must find a person to sacrifice in Harvey’s place. But wait… Sabrina would never kill someone, would she?

Why It’s Hot: Chilling Adventures Of Sabrina is back with its first new issue since August… August 2017! It’s been a long time, and I know that I never expected to see another issue. I think that’s what makes this return so exciting; one of the best comics around disappeared, readers thought it was gone and lost forever, but lo and behold there’s a brand new issue. I have no clue what comes next, but try to enjoy this one while you can, and just in time for spooky season! 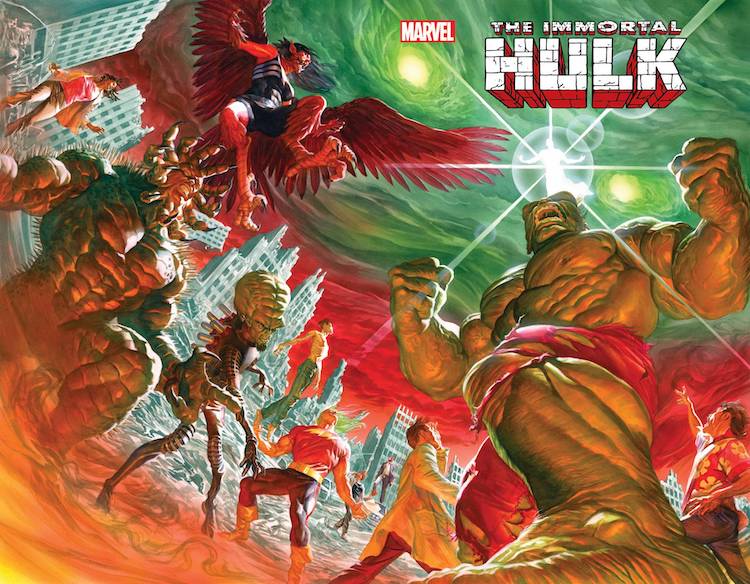 • Down in the Below-Place, the Hulk searches among the ghosts of the past for the answers to all his questions.

• The One Below All, the Green Door, Samuel Sterns, Jackie McGee and Bruce Banner. It’s all been leading here.

• This is the last issue of THE IMMORTAL HULK.

Why It’s Hot: Immortal Hulk has not only been one of Marvel’s best series over the past few years, but it’s been one of the best comics being published anywhere, and the greatest Hulk run ever. I should be enthusiastically screaming from the rooftops about how you should buy this super sized finale to Al Ewing’s entire magnificent run, but I can’t. You may have noticed that there are six entries to the Hot FIVE this week, and that’s because I usually recommend five comics to buy, but I can’t recommend anybody buy this comic this week, as I can’t in good conscience ask people to buy the work of somebody who uses their artistic talent to dehumanize their fellow person/spreads hatred in this world. Some people may say that I should stick to the work, but Bennett himself has ensured that is almost impossible by letting his hateful views and harmful stereotypes seep directly into his Marvel work. It is a step in the right direction that Bennett was removed from what was supposed to be his next assignment after backlash to the announcement, but it is an absolute shame that Bennett wasn’t pulled off this title immediately, and has instead overshadowed the last stretch of the absolutely stellar work that the rest of the creative team has put in. One of the saddest parts of all this is that Bennett has been putting out the best work of his entire decades spanning career as of late. The Brazilian really found his groove with this Hulk run, and yet just couldn’t help himself from being an ignorant tool.

It’s hard to completely ignore one of the biggest Marvel releases of the week, and I know people are excited to see how this all ends, but I can implore you to try and wait for the series to hit Marvel Unlimited at the very least. 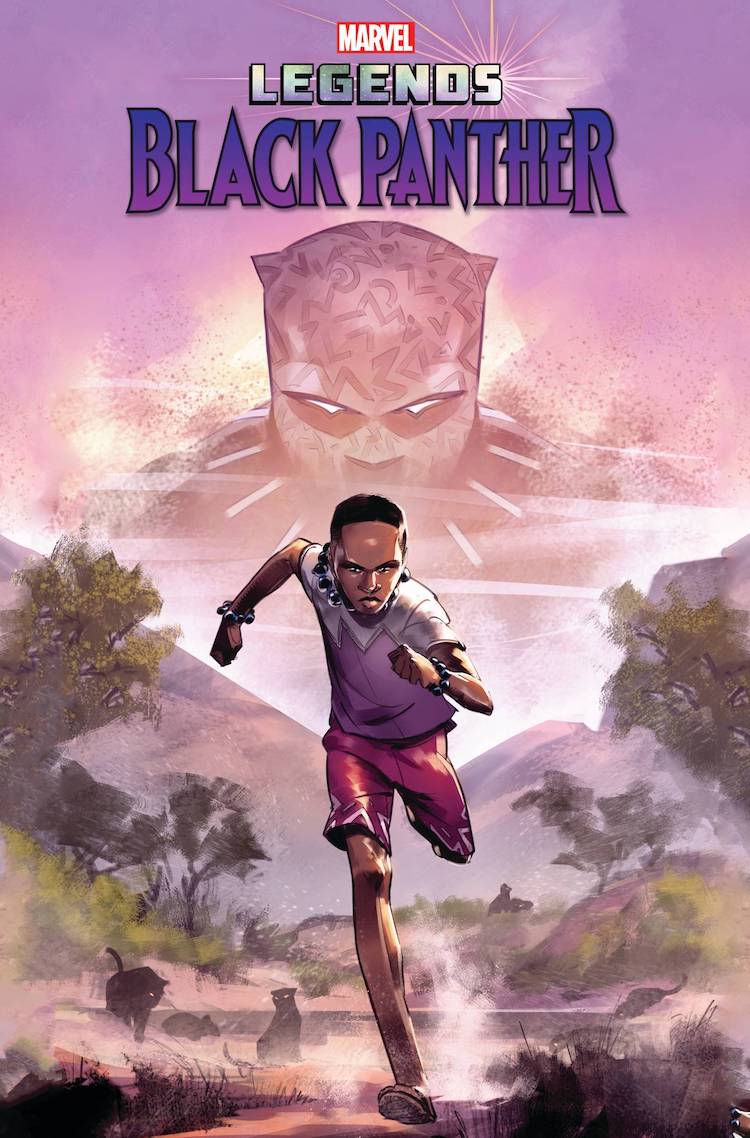 Dive into the legend of the Black Panther in this new origin story by acclaimed author Tochi Onyebuchi and New York Times-bestselling illustrator Setor Fiadzigbey, perfect for middle grade readers!

T’Challa and Hunter are brothers growing up in the idyllic royal palace of Wakanda. Theirs goes beyond the usual sibling rivalry, though – Hunter, although older, is adopted, and T’Challa is the true heir to the throne. Both brothers wrestle with fairness and the future, readying themselves for responsibility, when tragedy strikes and takes the choice from them. This new series, ideal for young fans and loyal readers alike, will explore the moments that make T’Challa who he is, from his adventurous upbringing to his walkabout as a teen where he meets the enchanting Ororo Munroe before she becomes the legendary Storm, to when he first invites the Fantastic Four into Wakanda! Son, Brother, Warrior, King – as each chapter unfolds, new pieces of T’Challa’s character will be revealed and the Black Panther will emerge.

Why It’s Hot: This series is the debut of the Marvel Legends line of books that takes the familiar stories of some of he most popular fictional characters in the world and retools them for a modern day younger audience. This entire line has potential to be massive for Marvel, especially in the book store market. I mean a brand new retelling of Black Panther’s origin story from a pair of acclaimed creators that looks to target middle school readers would already have all the potential to be great, but in kicking off this new line it can ending up be special. 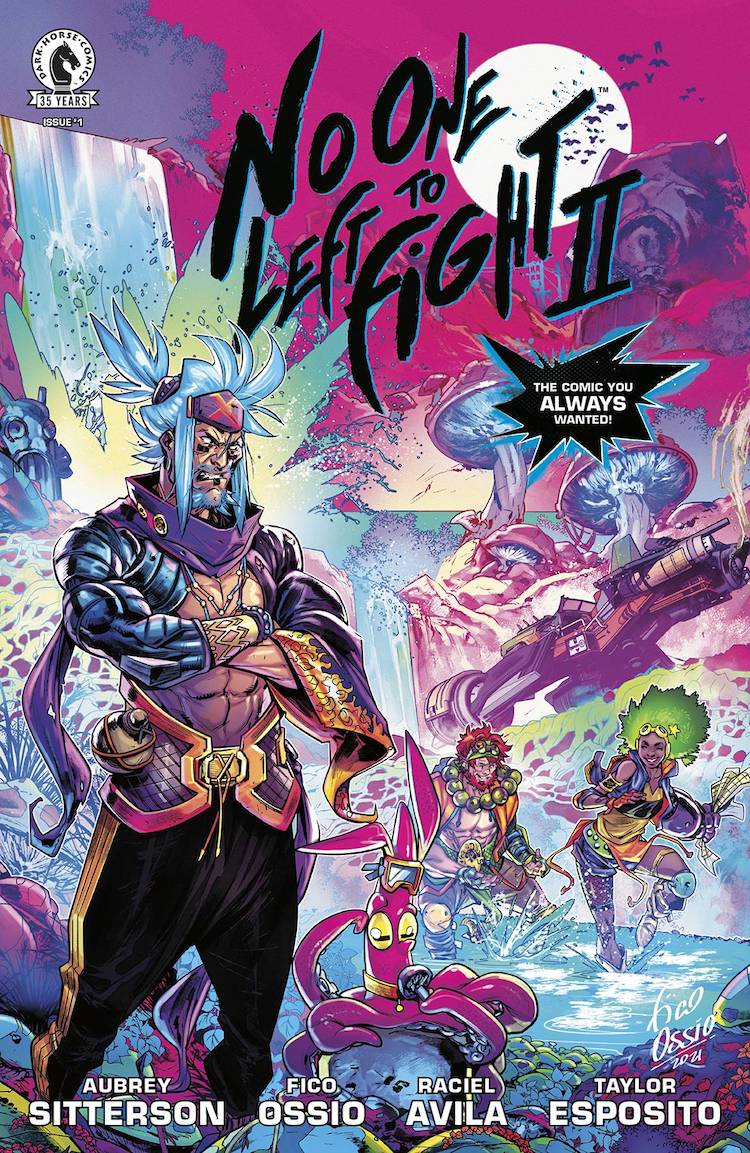 The comic you always wanted is back courtesy of creators Aubrey Sitterson (Savage Hearts, The Comic Book Story of Professional Wrestling) and Fico Ossio (Mister Miracle, Spider-Man). This volume picks up where the smash-hit, critically acclaimed first Fightverse series left off, with the world’s greatest fighter struggling to find his place after all his battles have been won and while there’s still time left.

• This series features alternate covers by Fico Ossio, which combine into an all-new interlocking image!

Why It’s Hot: The original No One Left To Fight was billed as “The comic you always wanted” and that wasn’t as hyperbolic as it seemed at face value. Sitterson and Ossio took readers on a non stop manga/anime inspired rollercoaster ride that didn’t slow down and featured a cast of very memorable characters. This second volume looks to expand on all of this, and knowing these creators they will do so by going bigger, badder, bloodier, and more bad ass than what we’ve already seen! 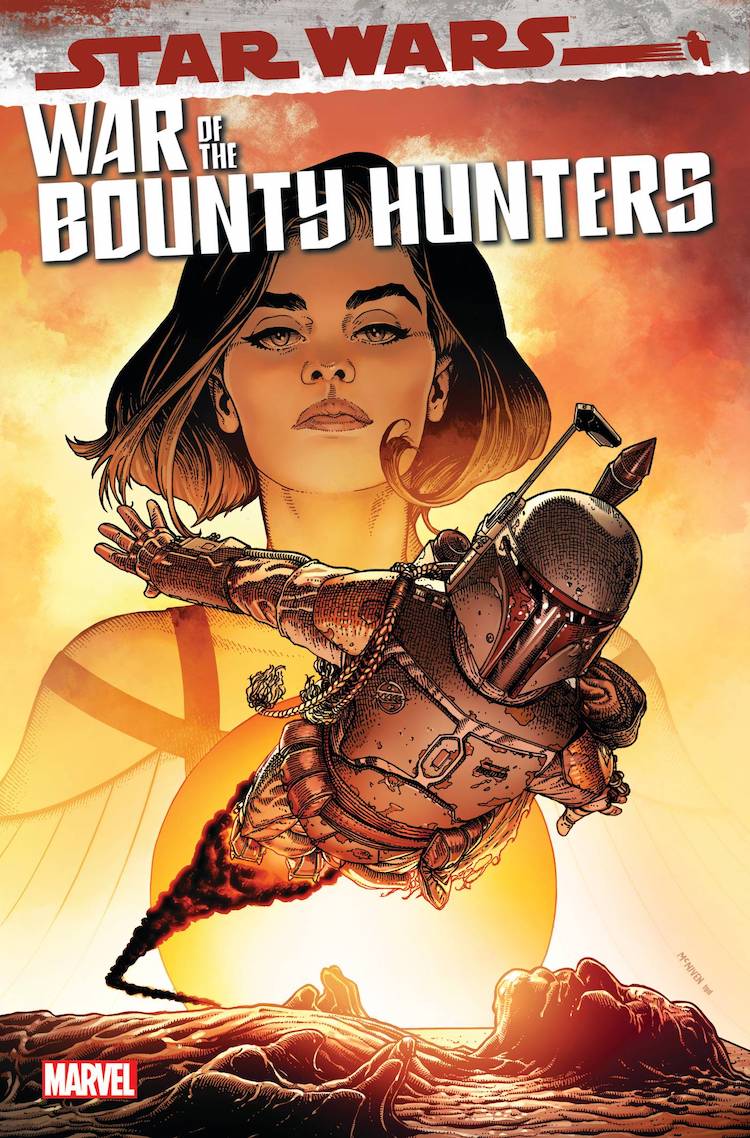 THE ULTIMATE FINALE! THE BIGGEST EVENT OF THE YEAR CHANGES THE FACE OF THE GALAXY!

• Everything and everyone in the galaxy is against bounty hunter BOBA FETT, from Sith Lords to Hutt rulers to the mysterious CRIMSON DAWN.

• He can’t succeed. There’s no way he can regain HAN SOLO, escape the bounties on his head, and survive to get his prize to JABBA THE HUTT and get paid. But HAN SOLO belongs to him, and no one will take him away.

• With a shocker of an ending that sets up a revolutionary new status quo for STAR WARS COMICS!

Why It’s Hot: The big Star Wars crossover featuring the battle for Han Solo’s carbonite frozen body comes to an explosive end this week courtesy of Charles Soule and Luke Ross. This crossover has been a blast. Not only have we gotten to follow so many of the franchise’s bounty hunters that we’ve come to love over the past 40+ years, but we’ve seen the return of the Crimson Dawn and their leader Qi’ra. It’s a big deal when characters make the leap in eras, and Qi’ra making the leap from the pre-original trilogy set Solo to right smack dab in the middle of the OT’s timeline here is being treated as a big deal at Marvel. We now know that this was just the first part of a Qi’ra and Crimson Dawn trilogy! If you’re a Star Wars fan this comic is not to be missed!