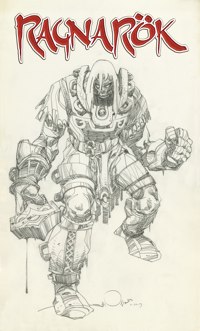 IDW Publishing has announced Walt Simonson’s Ragnarok and the collection of his 1983 series Star Slammers. 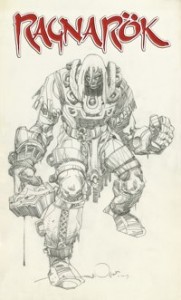 San Diego, CA (July 19, 2013) – IDW publishing is proud to announce an all-new creator-owned series by Walter Simonson! Ragnarök will explore Simonson’s beloved Norse mythology, as well as much, much more. Coming in 2014, Ragnarök will be written and drawn by Simonson, and will feature iconic deities and classic tales with the devastatingly beautiful artwork that is synonymous with Simonson.

“Scott Dunbier and I first talked about me working on a creator-owned book involving the Norse gods 15 years ago, but as many of my former editors can tell you, I’ve always regarded deadlines as useful fictions,” said writer/artist Walter Simonson, “So here we are… finally! All I can say is that I’ve loved the stories of the Viking gods since I was eight. I am thrilled that with IDW’s help and support, I’m launching an ongoing series of stories built around a new vision of some old friends. And enemies.” 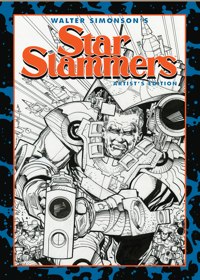 featured intergalactic mercenaries-for-hire who went into the business of war, and became the most successful businessmen of all time. Completely re-mastered and re-colored, the Star Slammers will be more deadly than ever! In addition to the re-mastered Star Slammers, a special Artist’s Edition of the series is planned, one that will be every bit as lovely as lovely as Simonson’s Harvey and Eisner Award-winning Thor Artist’s Edition. As with all Artist’s Editions, Star Slammers will come in an oversized hardcover format, featuring exquisite scans of Simonson’s original pages.

“My last experience with an Artist’s Edition was so positive,” said Simonson, “how could I possibly refuse when asked to do the Slammers!”

A preeminent figure in the comics community, Walter Simonson has contributed defining runs on multiple top-tier characters. His legendary runs on Thor, Fantastic Four, and Orion are considered classics of the form. Working with The Hero Initiative, helping comic creators in need of assistance, Simonson continues to inspire through his efforts on and off the page. In 2010 Simonson was presented with the Hero Initiative Lifetime Achievement Award.

With Simonson’s newest projects, IDW is fully committed to honoring the past works of Simonson and making his newest venture his most anticipated!