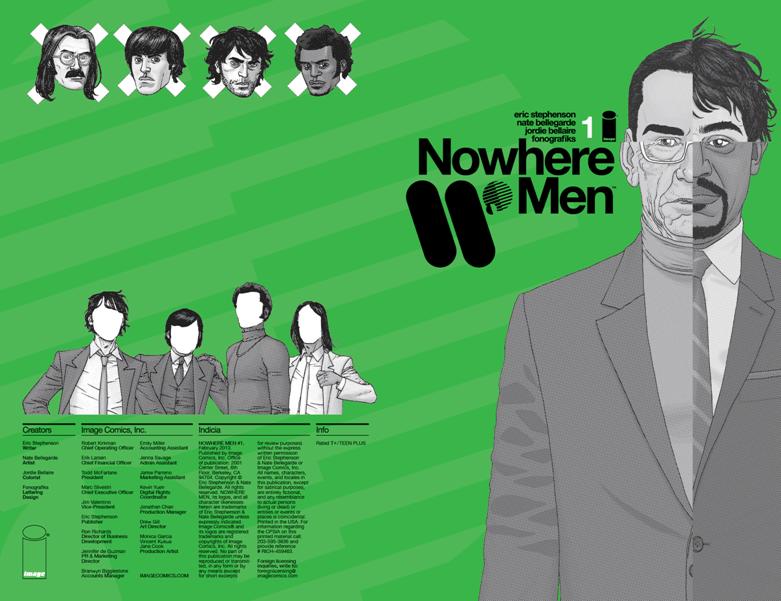 Image Comics has announced a fifth and final printing for Nowhere Men #1. 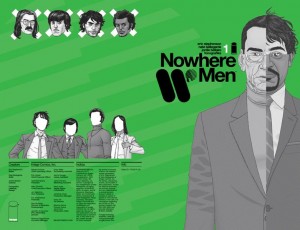 At the center of NOWHERE MEN, the phenomenally popular Image Comics series by Eric Stephenson and Nate Bellegarde, is breakdown of the relationship of four scientific geniuses and the chaos it causes in their powerful research and development company, World Corp. With profiles and exposé pieces about “the Fab Four of Science,” interviews, and vintage-style Word Corp advertisements, reading NOWHERE MEN is an immersive experience that has drawn the comics market into its world. The first issue, which was first published in November 2012, has sold out for the fourth time and is going into its fifth printing.

However, this fifth printing, which will be on store shelves on April 24, will be the final regular reprinting of the issue.

“I know you’re never supposed to say ‘never,’ but considering we’re on the fifth printing of the first issue, everyone on the creative team is in agreement this should be the last one of these,” said Image Comics Publisher and NOWHERE MEN writer Stephenson. “We’re thrilled with the response so far, though, and can’t wait for everyone to see where we’re going with things.”

Every issue of NOWHERE MEN released so far has sold out and received multiple printings. Those interested in picking up the latest printings and issues are encouraged to pre-order at their local comic book store so they don’t miss out on one of the hottest titles of the year. (Check with Comic Book Shop Locator for locations.)

The most recent issue of NOWHERE MEN, #4, was in stores on March 13, and its second printing will be available on April 10. It received wide praise at its release:

“This series from has been nothing short of being divinely immense –in terms of its scope and sheer brilliance in elegant storytelling.”
–Read Comics Books

“Nowhere Men could be the smartest, most original comic I’m reading right now.”
–Den of Geeks

“It has an incredibly ostentatious vibe to it and only praise can be given to Stephenson, Bellegarde and Bellaire for creating such an atmosphere.This book is the epitome of a cool comic book.”