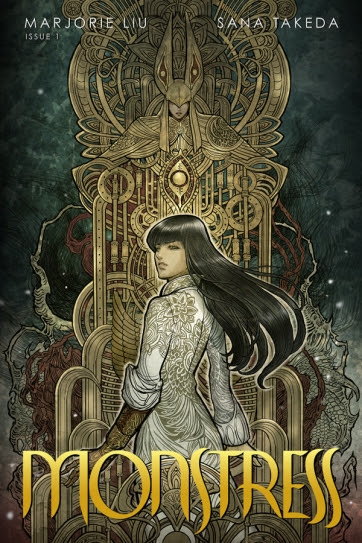 “Monstress is the story I’ve wanted to tell for years, a dark epic fantasy about a young girl who has suffered tremendous loss and who isn’t quite certain how to put herself back together—if that’s even possible. To make matters worse, she fears something else is living inside her: a monster. And she’s right to be afraid,” said Liu on why she was first inspired to write MONSTRESS.

“My other motivation for telling this story is that powerful women are always imagined as monstrous. Bringing women, monsters, and power together—setting this in a world that never was, and could be—is something that speaks to my heart. Every single girl in the world has had to fight to have herself heard, to have space and a self in societies that try their best to deny them all three. Every single girl, whether we want to recognize it or not, is a warrior. And me writing about a young warrior woman is less a fantasy than a reflection of what it means to grow up a woman in societies like ours.

And then there’s Sana Takeda, who is a genius. It’s really that simple. Magic? She’s got that, too. Her vision, and sense of story and beauty is beyond compare. I am in constant awe of her talent. That this is also an ongoing monthly comic written and drawn by two women of color, two Asian women—Chinese-American and Japanese—is also satisfying on a totally different level.”

In MONSTRESS, steampunk meets Kaiju in an alternate 1900s Asia, where a teenage girl named Maika begins to unravel her mysterious past, and in the process discovers a psychic connection to a powerful otherworldly creature, one of many that roam the earth—a connection that will transform them both, and make them the target of both human and otherworldly powers…

MONSTRESS #1 (Diamond Code SEP150509) will launch at triple size, weighing in at 72 pages for only $4.99 and in stores on Wednesday, November 4th. The final order cutoff deadline is Monday, October 12th. Pre-order cards are available online for customers: http://monstress-comic.tumblr.com/preorder.