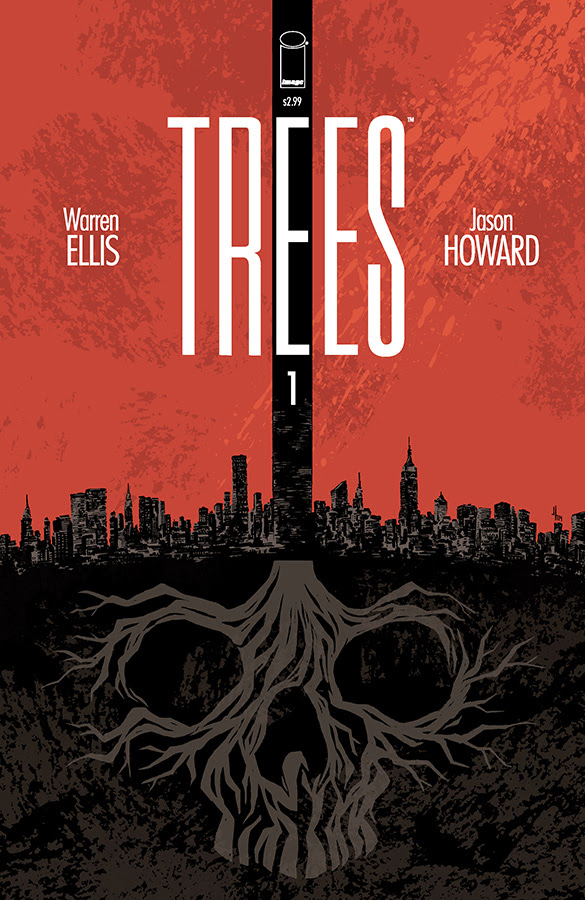 In anticipation of the frenzied mob of fans likely to storm comic book stores everywhere for issue #2 of the hit new series, Image Comics is pleased to announce that the digital edition of Warren Ellis (SUPREME: BLUE ROSE, Planetary) and Jason Howard’s TREES #1 will be available for free, across all platforms, starting today, Friday, June 20 through Tuesday, June 24.

“It’s not every day that a writer as important and influential as Warren Ellis launches a major new series, so making sure Trees reaches as many readers as possible is an ongoing priority for us here at Image,” said Eric Stephenson, Publisher at Image Comics. “We started off by doing a massive overprint to make sure the book would remain in print over the course of the first few issues—we overprinted by one third of total orders—and now, based on not just incredible post-release sales, but near-unanimous praise, we are sharing the first issue with straggling non-believers for free.

“Modern comics would not be what they are today without Warren Ellis, it’s as simple as that. Transmetropolitan. Planetary. The Authority. There are a fair number of writers working at Image today who could rightly be described as heirs to his creative legacy, but Warren is still at the peak of his powers and Trees is a glowing testament as to why.

“Best of all, Warren continues his long-time tradition of working with some of comics’ absolute best artists, and in Jason Howard, he may have found his canniest collaborator yet. Warren and Jason have completed up through issue five at this point, and as someone lucky enough to have read that far, I’m happy to report the world they’re building together is nothing short of phenomenal.”

Readers who haven’t yet had a chance to jump on with the new science fiction suspense series everyone has been raving about will find the perfect opportunity to do so in this free TREES #1 promotion, available just before the second issue’s release.

“Trees is a bold debut that offers many questions and fewer answers. The book’s large scope is intriguing, made even more so when considering that much of humanity’s demise is self-inflicted. Though we only get a glimpse of the assumed main players here in issue #1, Ellis and Howard appear prepped to deliver a uniquely exciting read.” —Jeff Lake, IGN

“Trees #1 is a strong debut… it’s great to see Ellis not just writing comics, but writing excellent comics. In interviews it’s been stated that Trees will have an initial story arc of eight issues or so, but that it could run for quite some time if all goes well. Based on the first issue, let’s hope so.” —Greg McElhatton, CBR

“Trees definitely falls into the and now for something different category. Warren Ellis delivers a strange alien invasion story that catches you off guard. Its hard to tell what this story will be about or where its going to go but thats the charm of the book. It allows you to relate to the characters as they are left wondering as well. Jason Howard nicely creates this new world and gives loads of detail that really fleshes everything out. I may not know where this story is going to go but I’m definitely hooked.” —Tony Guerrero, ComicVine

“Trees is a visually spectacular vision of first contact that will leave you with plenty to wonder about.” —Michelle White, Multiversity Comics

“Trees is certainly worth a continued watch, especially given Jason Howard’s art. He seamlessly balances both line work and color art resulting in a story that is well-paced and makes use of colors that provide emphasis in all the right moments.” —Forrest C. Helvie, Newsarama

The free digital edition of TREES #1 will be available on the Image Comics website (imagecomics.com) and the official Image Comics iOS app, as well as on Comixology on the web (comixology.com), iOS, Android, and Google Play.