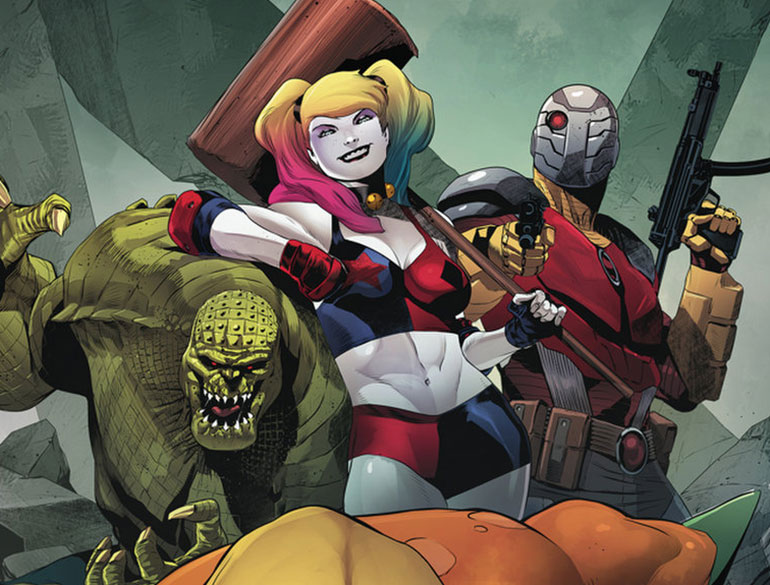 Ready for the strangest crossover yet? Sure, you’ve seen Batman meet Elmer Fudd, but the Suicide Squad meeting Aquaman?

Co-writers Dan Abnett (Aquaman) and Rob Williams (Suicide Squad) team up to bring us the four-part “Sink Atlantis” story, and took a little time out to chat with Comicosity all about it. Want to know what’s up with Mera? Who’s replacing Enchantress on the team? Read on… 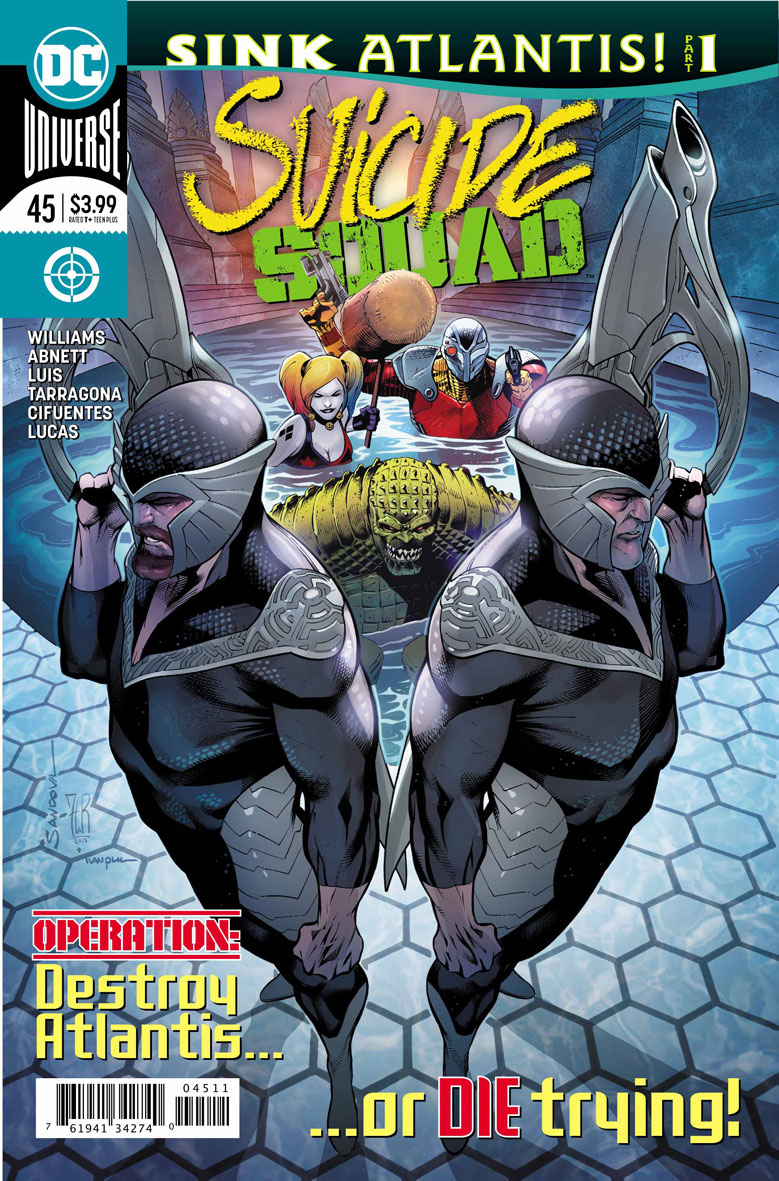 Matt Santori: Thanks for taking the time to chat, gentlemen. The Suicide Squad and Aquaman seem like a pretty odd couple in terms of pairing. How did the crossover come about and what were some of your first impressions of your collaboration?

Dan Abnett: Given the world-shaking events at the end of the Aquaman epic, it seemed like an interesting follow up. How would the rest of the world react…and who might they send to do something about such a deeply risky, knife-edge situation? Rob and I had a lot of fun brainstorming it. We know each other of old from UK comics (we both write for 2000AD), so we were on the same wavelength and spent several long phone calls hashing out the details. I could call it a wonderful creative synergy, but I won’t, because Rob will pull a face.

Rob Williams: I suspect it came about as we’re under the same editorial group. I know Dan from our years both working for 2000AD, and we’ve always got on, so co-writing together seemed a fun prospect. And so it proved. Dan knows what he’s doing. We plotted out the story along with our editors, and then it was a case of us scripting our individual chapters. I passed the Aquaman cast pages to Dan so he could massage their voices, and he offered the same prospect to me with the Squad. It all worked out fine. 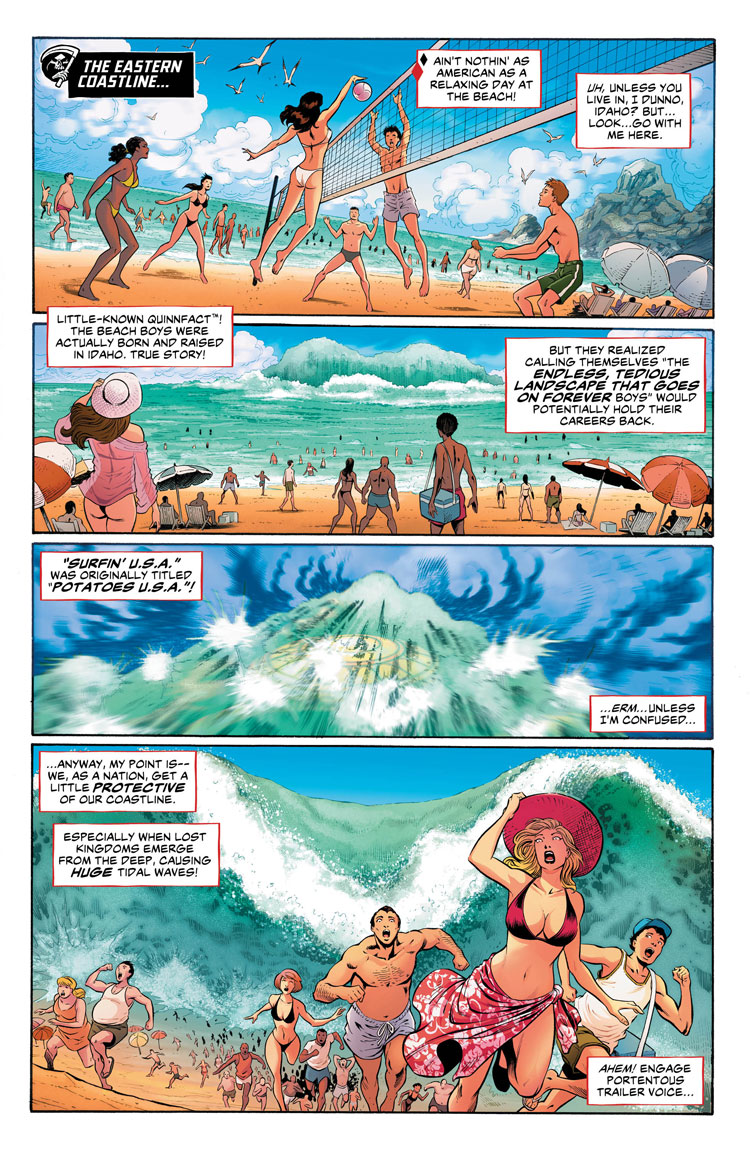 MS: The impetus of the crossover is part of the aftermath of Dark Nights: Metal — the raising of Atlantis. We’ve seen direct conflict between the lost city and the surface world a few times in the past. How are you approaching it this time around with fresh eyes?

DA: This is a problem in the DCU that doesn’t go away. Atlantis is always seen as an outside threat, mysterious and creepy and dangerous. And it is – it’s immensely powerful and most of the population is either afraid of the ‘surface world’ or hates it. This isn’t so much some fresh new take on that long enmity – it’s an escalation. The next stage of a ramped up conflict.

RW: Well, Atlantis has risen and is now a new country in the defensive borders of the USA. That’s going to cause huge tensions. There’s some in the US Government who’ll be for peaceful overtures and some, as in the character Dan previously established in Aquaman — Meddinghouse — who’ll be far more hawk than dove. Atlantis has an army of sea monsters and could bring tidal waves down on the eastern and western seaboards of the US. It’s a threat. So, Meddinghouse seeks to counter that threat, and he does so by bringing in Task Force X. 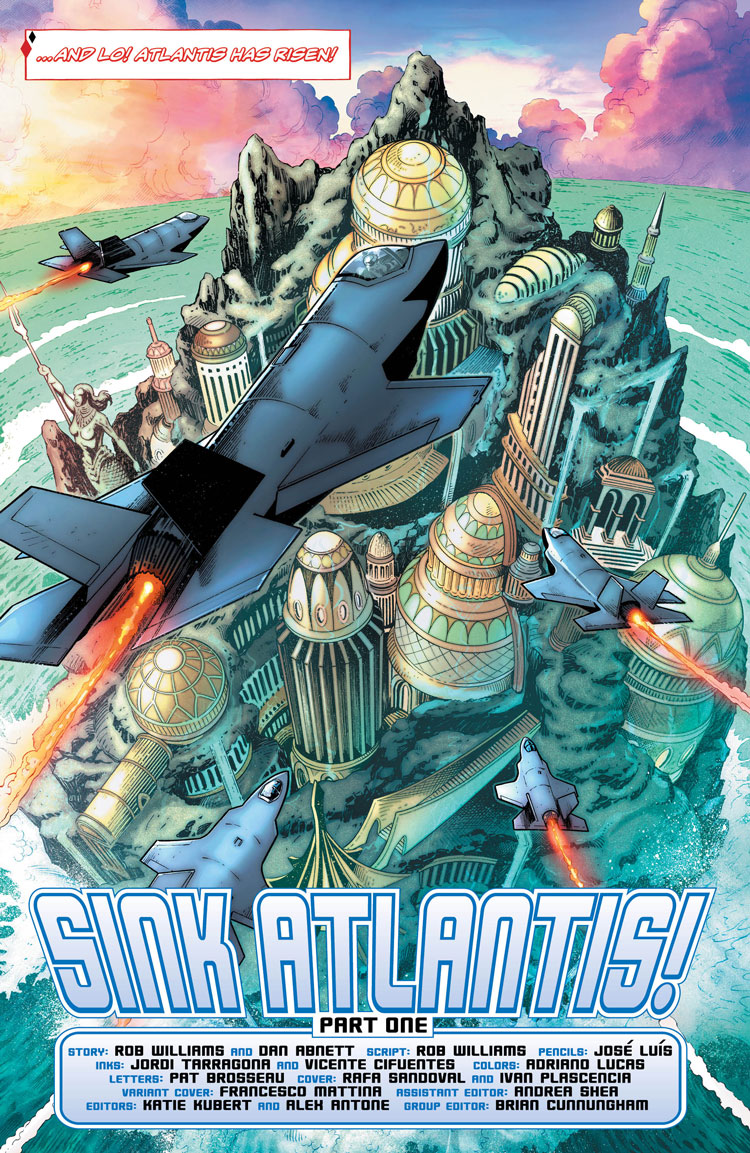 MS: The team that arrives in Atlantis from Belle Reve has some existing and new faces. What can you tell us about the current make-up of the Squad and why they are the right team for this particular mission?

DA: They were the crew picked. They don’t get much say in it. They were, in fact, the only ones available or alive. But I have to say we got a great line up — some familiar faces, great long standing SS members — and a couple of fascinating new ones. I think the new mix makes the story better. Readers won’t know where this is going, how characters will interrelate or act, or who’s going to walk away.

RW: Well, Enchantress is dead, so the Squad currently have no magical firepower. That’s why Lord Satanis is brought up to be part of the team, and they need a way into a very secure magical vault, hence Master Jailer joining the crew. As for why they’re the right team for this mission? They’re completely deniable by the US Government. They’re a group of super villains. If this mission fails and the Squad are caught, Meddinghouse can say ‘nothing to do with me.’ 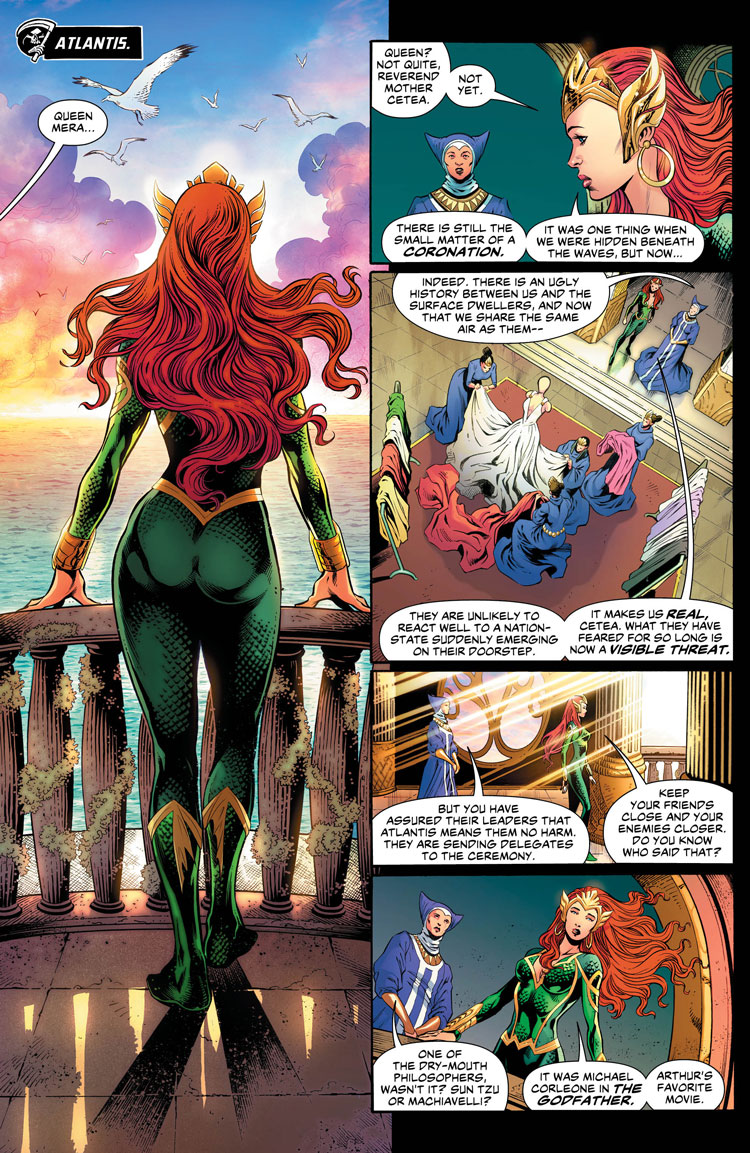 MS: We’re also arriving to Aquaman’s storyline on the precipice of Mera’s coronation as queen — and sole ruler — of Atlantis. Why did it feel like time to hand the keys of the kingdom over to her and what are some of the ramifications you’re playing with?

DA: It’s the right thing to do and though she was reluctant to embrace the responsibility, Mera is ready. Arthur is happy about it. He knows she’ll make a great queen, but he wants to stay out of her way so that his reputation (as the ex-king that Atlantis finally threw out) doesn’t tarnish her. However, it also could mean the end of their relationship. Can they continue when their roles are now so changed? It’s a painful time of strong, mixed feelings. And with Atlantis risen, Mera’s first day in the hot seat is NOT going to be easy. 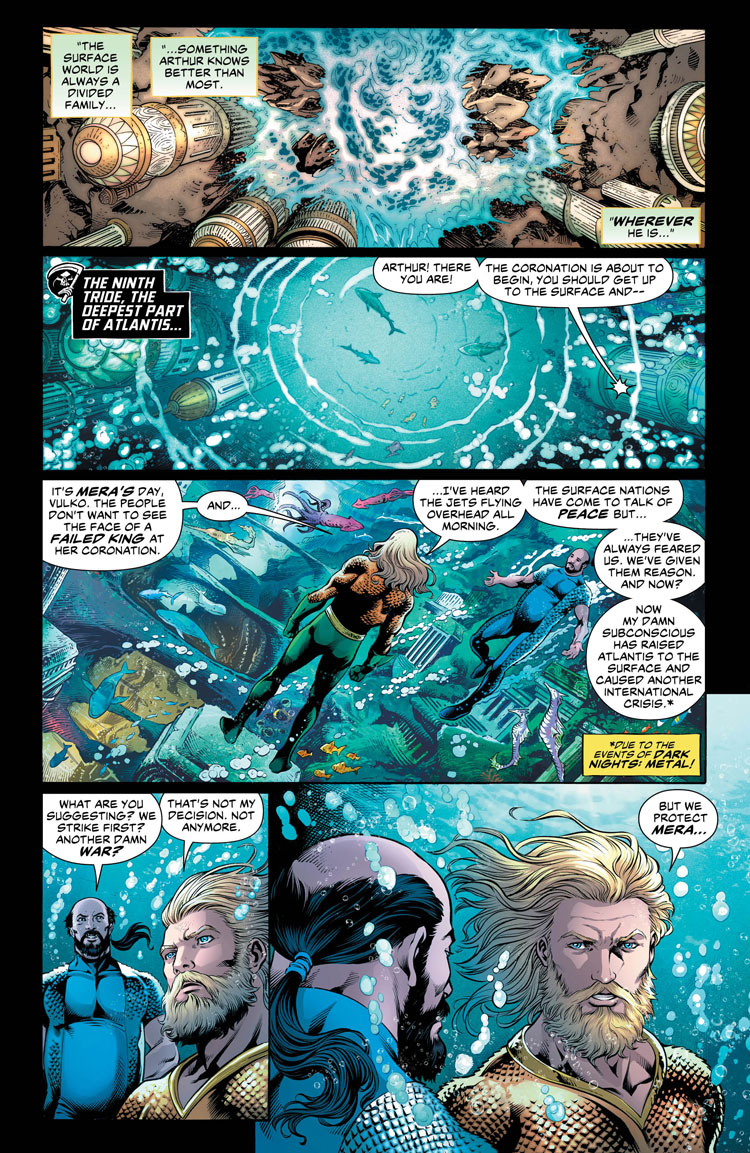 MS: This issue also sees Urcell taking center stage in coordinating with the Suicide Squad. Can you share a little of her motivation and background moving from her role with the previous, short-lived monarch, to a revolutionary of sorts?

DA: Urcell was a terrorist — part of the anti-surface, hardline group called the Deluge that Rath used to lead. She wants to make Atlantis great again, and crush the surface world. That’s why she helped get Rath on the Throne.

Now that reign has ended, she’s on the out. She despises the surface world, but she despises even more the ‘new regime’ – Mera and the conciliatory approach Mera is likely to take as queen. The surface world has the upper hand and Atlantis is under threat. Urcell figures if she assists the surface dwellers, she can save Atlantis by walking back the threat of annihilation by the surface… and in the process, affect regime change and get Atlantis back where she wants it. Which means Mera will be gone! 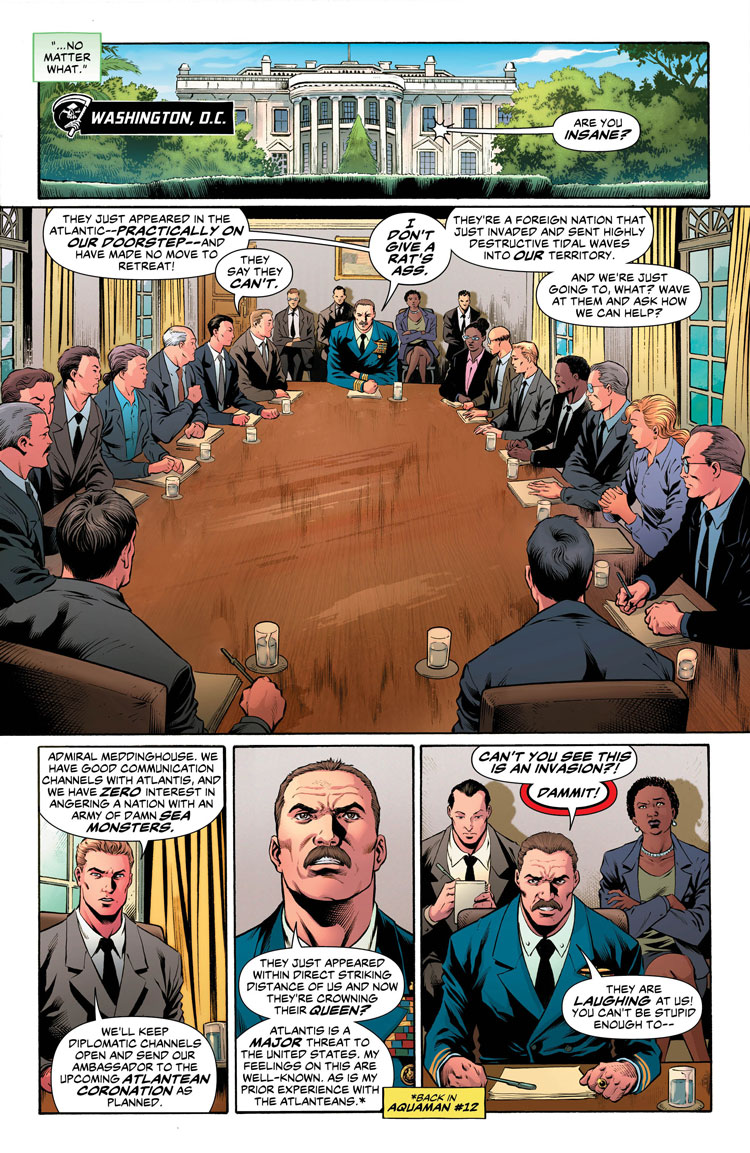 MS: We have José Luís pencilling on this first chapter, followed by Joe Bennett on Aquaman #39. What is each artist bringing to the table in terms of storytelling that’s influencing the story for you?

DA: Just simply awesome art from both. Amazing detail and great characterization… which is at order given that we’re dealing with two books – the Suicide Squad team and the ‘team’ Arthur will pull together. That’s a lot of characters to keep in play!

RW: Jose Luis comes from that kind of grand Phil Jimenez/George Perez school of big scale DC action. A storyline like this requires the artist to sell the personal acting arcs of these characters and the widescreen nature of amazing Atlantean vistas. Atlantean architecture, masses of sea monsters etc. He’s got a really dynamic way with action. He’s clearly an artist people are going to be seeing a lot of in years to come. 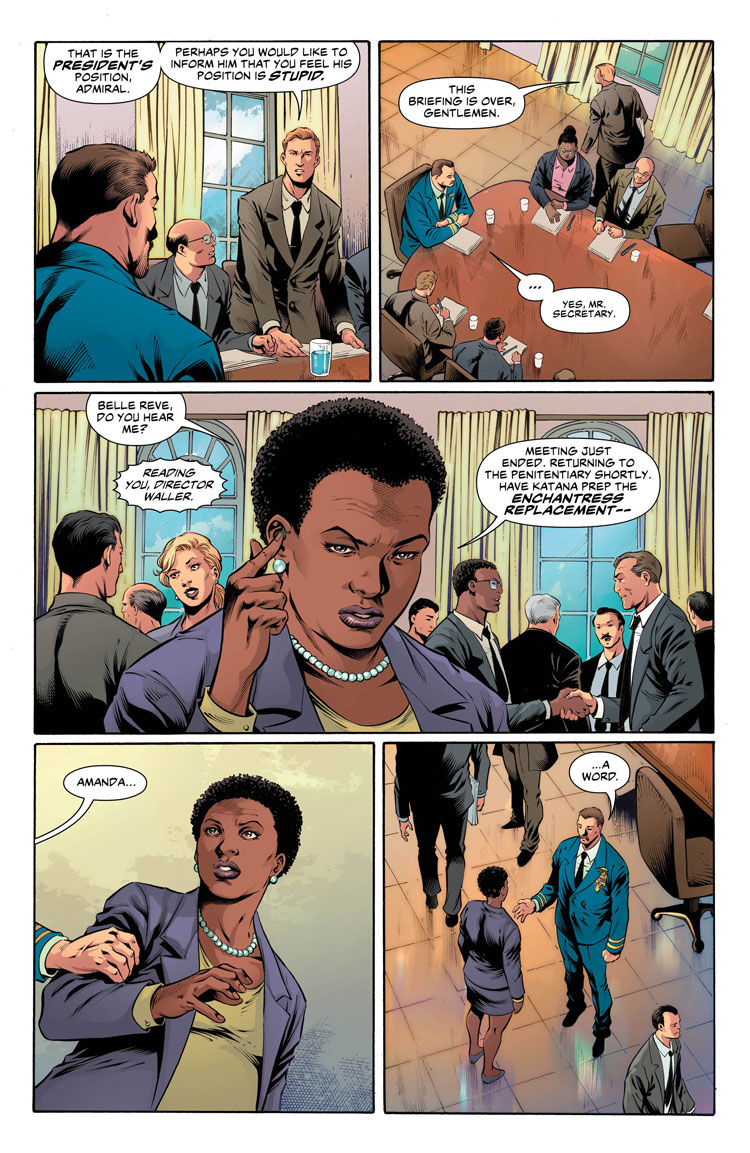 MS: Any special teases for the next chapter of “Sink Atlantis!”, arriving later this month?

DA: The clue’s in the title. It’s all kicking off and it isn’t going to end well for everybody. The fate of an entire nation hangs in the balance.

RW: It features the first DC appearance of the Suicide Squid. I’m very happy to have added him to the DC milieu. And there’s going to be high stakes, big action and some of these characters aren’t making it out alive. It’s going to be epic.