The Berlin Wall is still standing and tension in Berlin is still high….prepare yourselves for The Coldest City, the newest thriller original graphic novel from writer Antony Johnston. Johnston recently took time out of his schedule to discuss the book and what readers can expect from this spy epic. 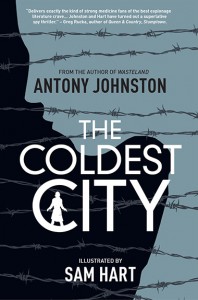 Aaron Long: Straight from the writer’s mouth: how would you describe The Coldest City?

Antony Johnston: It’s a Cold War spy thriller, set in Berlin during the last days of the Berlin Wall. A list has gone missing — a list that the source claims contains the names of every spy working in the city, on all sides. It was being carried back across the Wall by an MI6 officer, but he never arrived. Instead he turned up dead in the river Spree, and he didn’t have the list on him.

MI6 are desperate to stop that list falling into Soviet hands. But they have a problem — they don’t know who to trust. Their Berlin officers are a little too cosy, too comfortable, in the city. They’ve gone native.

So MI6 sends in Lorraine Broughton, an experienced spy who’s never set foot in Berlin, doesn’t know the other spies there, and has no ties to the city. She barely even speaks German. She’s the perfect candidate to get to the bottom of this potential disaster.

But Lorraine touches down just as tensions in Berlin are reaching boiling point, the fever pitch that led to the fall of the Wall itself. She’s been dropped into a maelstrom of lies, social unrest, counter-espionage, defections gone bad, and betrayal.

AL: What led you to choosing the final years of the Cold War as the setting?

AJ: It was a fascinating time. I grew up during the ’70s and ’80s, and the threat of all-out war, maybe even nuclear war, hung over us all on a daily basis. But then in the late ’80s things started to change — perestroika and glasnost brought about cracks in the Iron Curtain, Communist Bloc states started to make noises about independence, and travel between the two sides was relaxed a little. And many people in the USSR really didn’t like that.

And Berlin was always the epicentre of the Cold War, a symbol that both east and west fought over incessantly. Packed with spies, tense as a piano wire, it really was the “coldest city” in the war of intelligence and propaganda.

But that closeness, the isolation of the city, meant it was also a very small, tight-knit community. Everyone knew everyone else. The allied spies couldn’t help but trip over one another in their daily goings-on. So when they realised the Wall might come down soon — something that, just a year or two before, had been unthinkable — you have to wonder how many of them dreaded the day, and would rather have just carried on as things were. After all, no Cold War meant no work for spies. 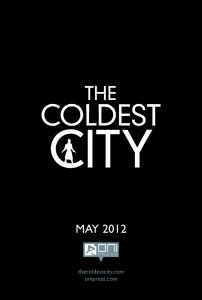 AL: Can you discuss who Lorraine is and what drives her in the story?

AJ: She’s an experienced spy, with many trips across the Iron Curtain under her belt, and an exemplary record within MI6, mainly for anti-Soviet operations in northern Europe — Czechoslovakia, Poland, Hungary, even Finland. So she knows her way around the Cold War, even though she’s never been to Berlin before. What drives her is her mission, it’s that simple. And she doesn’t want to spend a day longer in Berlin than she has to.

AL: How did Sam Hart get associated with the project?

AJ: I’ve known Sam for many years — despite living in Brazil, he’s originally from England, and after first getting to know one another online we’d met a couple of times at conventions over the years. I knew I’d want to work with him some day, but was waiting for the right project to come along. When I was casting around for an artist on THE COLDEST CITY, I realised this was the one, he was a perfect fit.

Sam has a lovely stark, noir style that suits the mood of the book really well, and he’s a great storyteller. This is some of the best work of his career.

AL: Any final words for Comicosity’s readers regarding The Coldest City?

AJ: It’s a book I worked on for several years, and I’m very happy with it — which isn’t something I often say about my own work!

I’m already working on a second book, working title DEAD OF WINTER, which is also set in Berlin and features some of the same characters. I also have plans for a third in the series, and maybe even more beyond that. So naturally, I just hope people like THE COLDEST CITY.

Anyone interested should head over to the website, thecoldestcity.com, where there’s a big preview of selected scenes from the book; more info about the story, me, and Sam; and all the ordering details.

Finally, we also made a trailer, which you can see at [on YouTube](URL: http://www.youtube.com/watch?v=j2czmHnGSfQ)