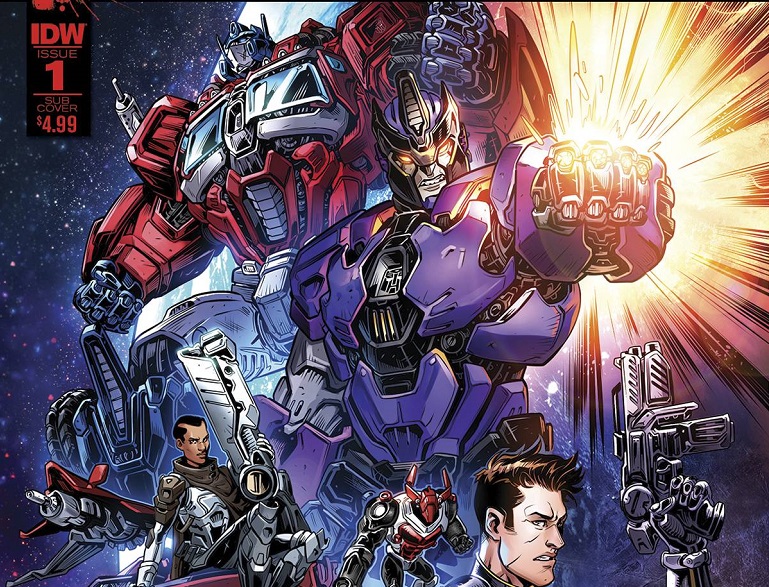 Revolution has wrapped and the Hasbro properties now exist in a shared universe. That universe poses unique challenges, and there’s a unique group of characters being assembled to handle them! Writer John Barber and artist Fico Ossio were kind enough to shed some light on who these Revolutionaries are and what will be coming at them in this unique title from IDW Publishing. 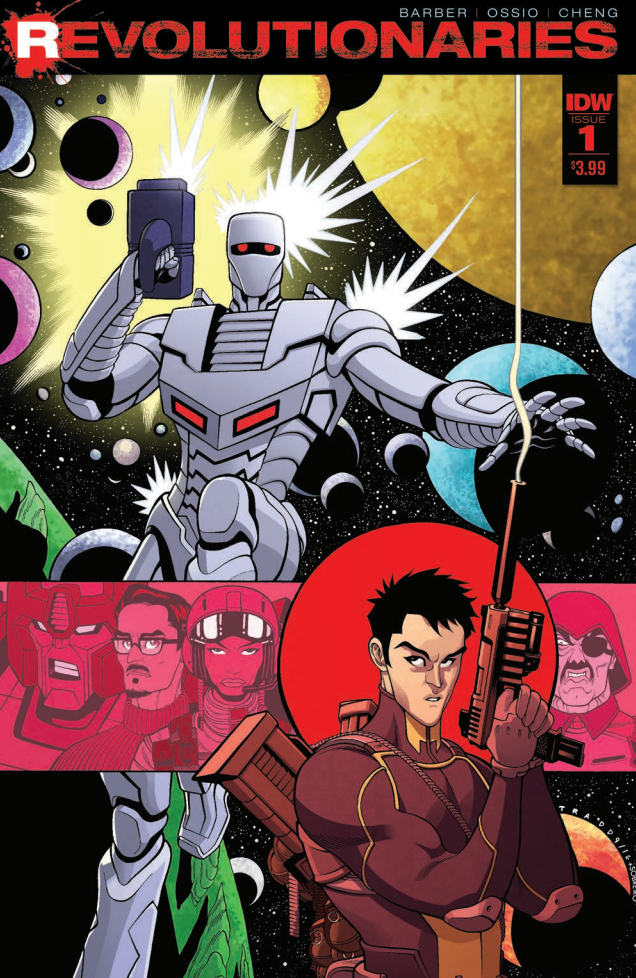 Aaron Long: Revolution merged the Hasbro properties into a shared universe, with Revolutionaries now spinning out of the event. What will readers be seeing in this series?

John Barber: Lots of fast-paced action and big world-building. The Revolutionaries team is made up of Mayday (who’s a G.I. Joe agent), Kup and Blackrock (who are Transformers), and Action Man (who’s English). So they’re already kinda all over the place to start with, but right off the bat they have to team up with Rom and the Micronauts to fight the Oktober Guard and the new Storm Shadow. Nothing’s off the table!

So we’ll be seeing big crossovers between characters, plus we’ll be going all over the world. If you’re a fan of the Hasbro characters—from the comics or the toys or the cartoons—there will be little nods, or returns to places and ideas from all over. Remember when Cobra had a base on the moon? We do. And we’re trying to pull in things from all over the history of the characters—like, I don’t know if anybody was expecting the Sgt. Savage and his Screaming Eagles relaunch of G.I. Joe, but that stuff plays a role.

If you’re not familiar with this weird stuff, no worries—we’re introducing all these ideas, not ex-pecting you’re an expert. But that said, we’ve done our homework.

AL: What corners of this new shared universe are you excited to explore with this multi-property team?

JB: Well, I don’t know when we’ll reveal this, but issue 3 has a mind-bending reveal that is may-be the last thing people expect to show up in this shared universe, but it opens up a lot of new windows for storytelling—stuff that makes sense now, that maybe wouldn’t have if it was just Transformers, or just G.I. Joe or whatever.

But in terms of literal corners: Issue one brings us to Schleteva, where the Karen Traviss/Steve Kurth G.I. Joe series took place; the country’s changed a lot since the flames of war were being stoked by Cobra. Issue 2 takes us to space and to Seattle, which has a needle from space, as I understand, so it all fits thematically. By issue 3 we’re looking back in time to when Soundwave first set foot on Earth, and we’re visiting the tomb of the mummy Amtoltec, from the old G.I. Joe Adventure Team days. We’ll see everything from the last ice age to the Iron Klaw’s nation of Ka-listan—the life and times of Atomic Man and the debut of Baron Ironblood and General Blitz— and the mysterious Cybertronian he commands.

Every issue has a little bit of it’s own flavor—a slightly different style or take. We really push that as the series goes on.

Fico Ossio: One of the things that Revolutionaries has that I enjoy so much is its ¨secondary¨ rotating cast. You’ve got the regular characters but on each issue or so John brings a new cha-racter into the story. And some haven´t been around for a while and I love to bring them back in a new, but familiar, look. We recently re-designed Baron Ironblood and I had a blast with it. 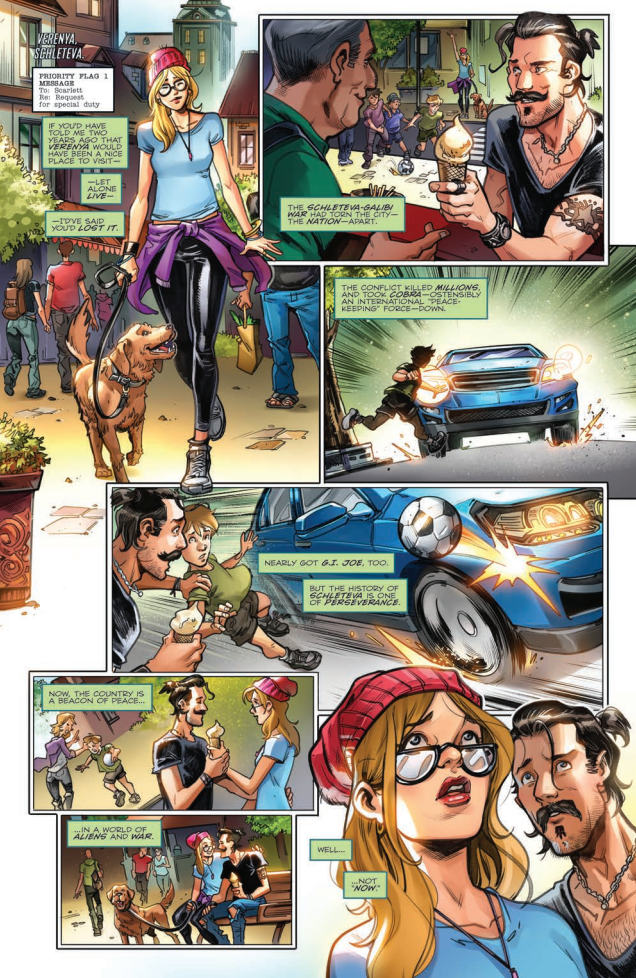 AL: The ongoing cast consists of Action Man, Blackrock, Mayday and Kup. Can you dis-cuss how this mix of characters was decided upon to anchor the title?

JB: At the Revolution writer’s retreat, Cullen Bunn suggested that since Action Man’s comic was a limited series, he’d be without a home post-Revolution. (Action Man, not Cullen, who has a nice home). So it might be good to have A.M. looking over what everybody else was doing—like, his mandate might be to monitor everybody worldwide. And Mairghread Scott sort of riffed on that that you could do with it, suggested it could be a little like Global Frequency and have self-contained stories about this world. And I wound up getting elected to write it because I’d done Action Man and sort of knew a lot about where the universe was going. (In the comics, I mean. Certainly not in real life).

So, I thought if we made this a team with Action Man, really gave this a different feel, it’d be a good fit to add the Transformers character Blackrock, who’d just be coming out of the Titans Return story. Blackrock is a tech-CEO who discovered his memories were false and he’s a Cybertronian. He’s Cybertronian, but his alt-mode is basically a human.

I knew we’d want somebody from G.I. Joe, but I suggested we could sort of push things here and use this to develop a new character, or anyway to build up a character Andrew Griffith and I had set up in Transformers, but who’d now be in G.I. Joe. We gave Anya Jones the semi-obscure out-of-use Joe code-name of Mayday, and she’s become sort of the leader of the team—Action Man is still new to the job; Blackrock is new to this life; so Mayday has the experi-ence with aliens and military tactics.

Kup was originally going somewhere else, or so I thought, but then it turned out Kup wasn’t really going to fit into that other series, and I thought he was too good a character to lose track of, but he wasn’t really essential to what Kei Zama and I were going to do in the Optimus Prime comic… but with about a half-second’s thought, I realized Kup’s an old soldier, and the idea of getting him together with this young, mostly-inexperienced team was just the thing Revolutionaries needed.

FO: Well, when I came on board the cast was already set. And I think they picked a great set of characters. Plus it feels a lot more tightknit and relatable than Revolution. Working on a smaller cast allows us to develop these characters more, and John is writing them awesomely. For my part, I focused on working more detail into their design. I got the chance to redesign Blackrock and it´s definitely a new look for the character, closer to his cybetronian nature. And well… I got carried away and kept going with Mayday: new armor suit! We did keep her hairstyle though… Nah, in all seriousness I wanted them to look the part of a lead character. Action Man´s design was pretty awesome already.

AL: Will the Revolutionaries be addressing a particular ongoing threat, or will they be a specialist team facing new challenges all the time?

JB: In issue one, they assemble because an ancient artifact called the Talisman suddenly mu-tates a bunch of people into Dire Wraith -like monsters. Everybody winds up in the same place for different reasons, and the pursuit of this Talisman—and, more importantly, its secrets—drives the team on all their different adventures. And the Talisman’s secrets will reveal a lot of… weird stuff about the planet Earth. 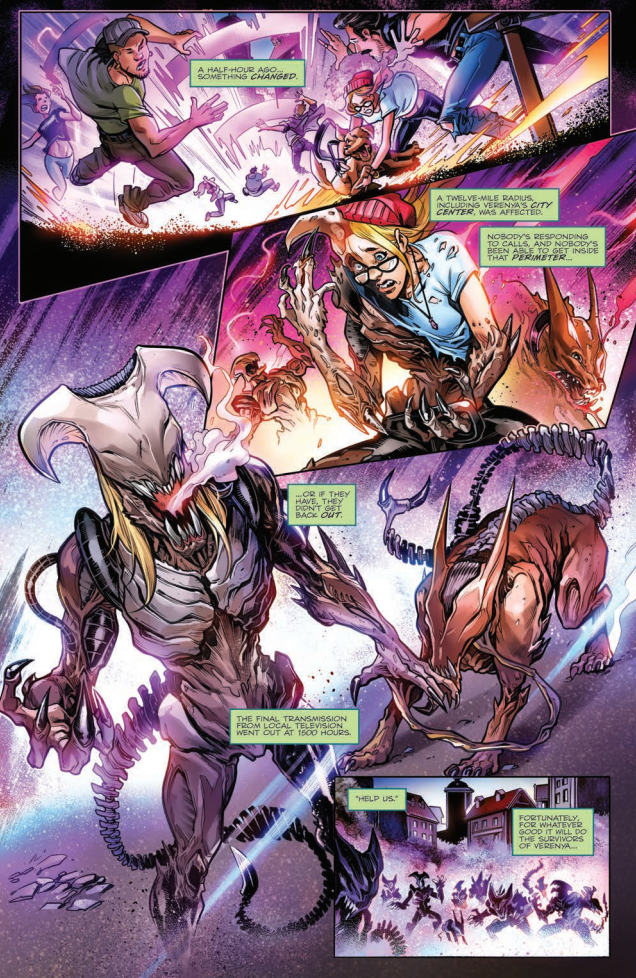 AL: Different characters will be rotating into the cast, with their introductions will Revolutionaries be touching upon storylines and events from other titles or will it be largely standalone?

JB: The comic is designed so you’ll be able to totally follow Revolutionaries without reading eve-ry other book, but people who’ve followed my writing on Transformers know I like making things fit together. So it all adds up into a bigger world.

Like, there’s a thing in the Micronauts Annual that Cullen and I got on the phone and worked out how it fits in with the Micronauts’ appearance in Revolutionaries. The guest appearances are definitely significant, and some of the revelations about them—like with Snake Eyes in issue 4—will help fill in the gaps between what happened last time we saw Snake Eyes, and his return in REVOLUTION and the G.I. Joe series.

AL: Fico, with Revolution and now Revolutionaries you’ve penciled the vast majority of Hasbro characters. Are there any particular characters or a particular group that you get the most excited to work on?

FO: Well… It´s hard not to get excited to draw Blackrock with the new design. I also enjoy drawing Mayday a lot. I really feel it´s important to have a strong female character, and I very much love paying attention to every detail on how we portray her to reinforce that. She rocks.

And lastly, I´m always exited to see them pop out of the pages with Seba’s colors. He is doing a fantastic job, as always.

JB: I’m really lucky because Fico is amazing at drawing everything. 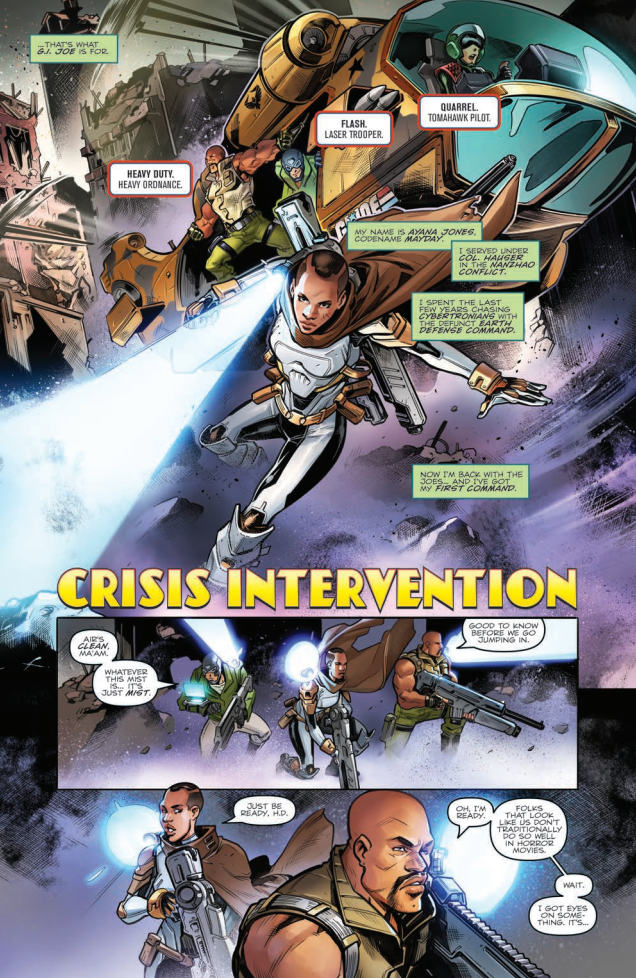 AL: Last words are to you – any final tidbits about Revolutionaries that you’d like to reveal to readers?

JB: This book is a dream to work on. We get to play in a massive sandbox and tell exciting sto-ries about amazing characters—and I get to work with Fico and colorist Sebastian Cheng, who’s phenomena, plus editor David Hedgecock who’s great to work with—plus getting to make ob-scure references to canceled comic books, 1970s advertisements, and Pound Puppies is more than a guy like me has any right to ask for.

FO: Exactly, it’s fantastic to be working on this. I was expecting to ¨tone it down¨ after Revolu-tion. It was an immense gig and I knew it was gonna be hard to top…BUT, I´m having more fun with this one even. The story is paced different, and we got these characters that have a lot to build on.

You know, every editorial has their big ¨flagship team¨ and I think that´s what Revolutionaries could be, and it’s exciting to be part of it, and more than anything to be working yet again with this group of exceptionally talented people. Working with John, David, and Seba is more than I could ask for!