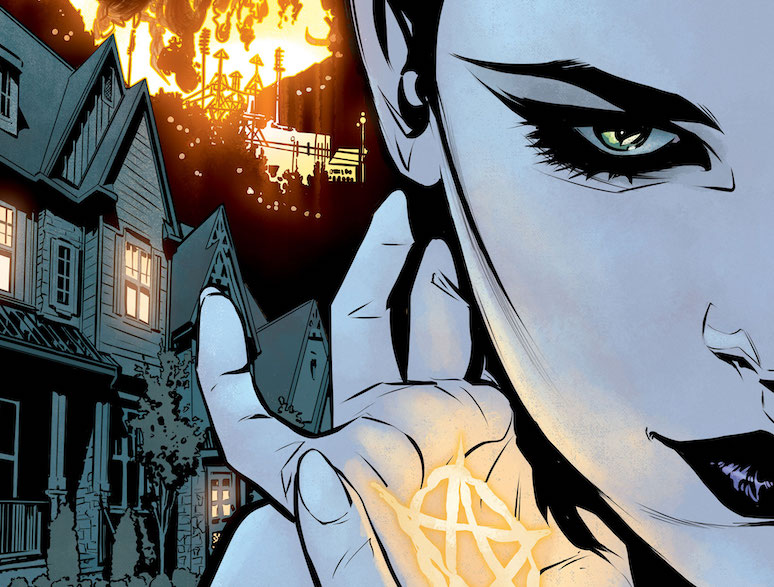 For as long as there have been powerful women, there have been men doing their damnedest to oppress them. With Hex Wives, writer Ben Blacker teams with Mirka Andolfo and Marissa Louise to tell the tale of a group of Witches, stuck in a new kind of war with a group of real bastards. Blacker was kind enough to give Comicosity the scoop about this immensely entertaining story, in stores tomorrow (October 31): 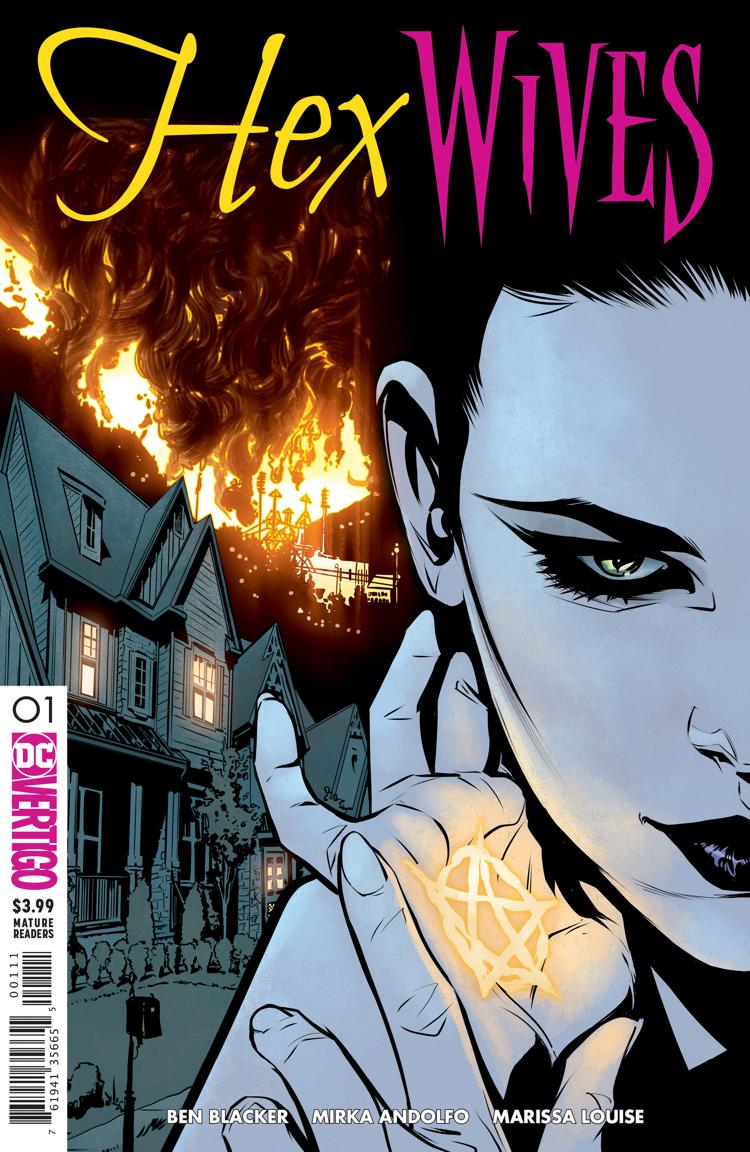 Aaron Long: So, how did Hex Wives come to be?

Ben Blacker: Hex Wives is the confluence of two ideas I’d been tinkering with in the back of my brain for years while my writing partner and I were working on a few other projects. Maybe five years ago, I caught an episode of “Bewitched” on TV. I loved that series when I was a kid, when I’d see it in syndication when I stayed home sick from school. It was a typical episode—Samantha worries about getting dinner on the table for her husband who is bringing his boss home from work. Samantha’s mother, Endora, swings by to tell Samantha that she’s married below her. But this was the first time it struck me that Endora was right! Samantha is this super powerful witch who is “not allowed” by her husband to practice magic! That’s bonkers. Darren didn’t want his wife to be her complete self.

So, this was something chugging along in the back of my head. Meanwhile, I was having more frequent and honest conversations with my wife and my women friends about the way they were really treated at work, in relationships, etc. There were a lot more insidious and ingrained attempts to control women than I had realized. Ways of subjugating or minimizing women and their accomplishments seemed inherent to our patriarchal society.

I learned so much about writing TV from “Buffy the Vampire Slayer.” One of the lessons from Buffy is about having a central metaphor. When I put these ideas together—an exploration of witch tropes and a desire to write about gender politics—Hex Wives really took shape. 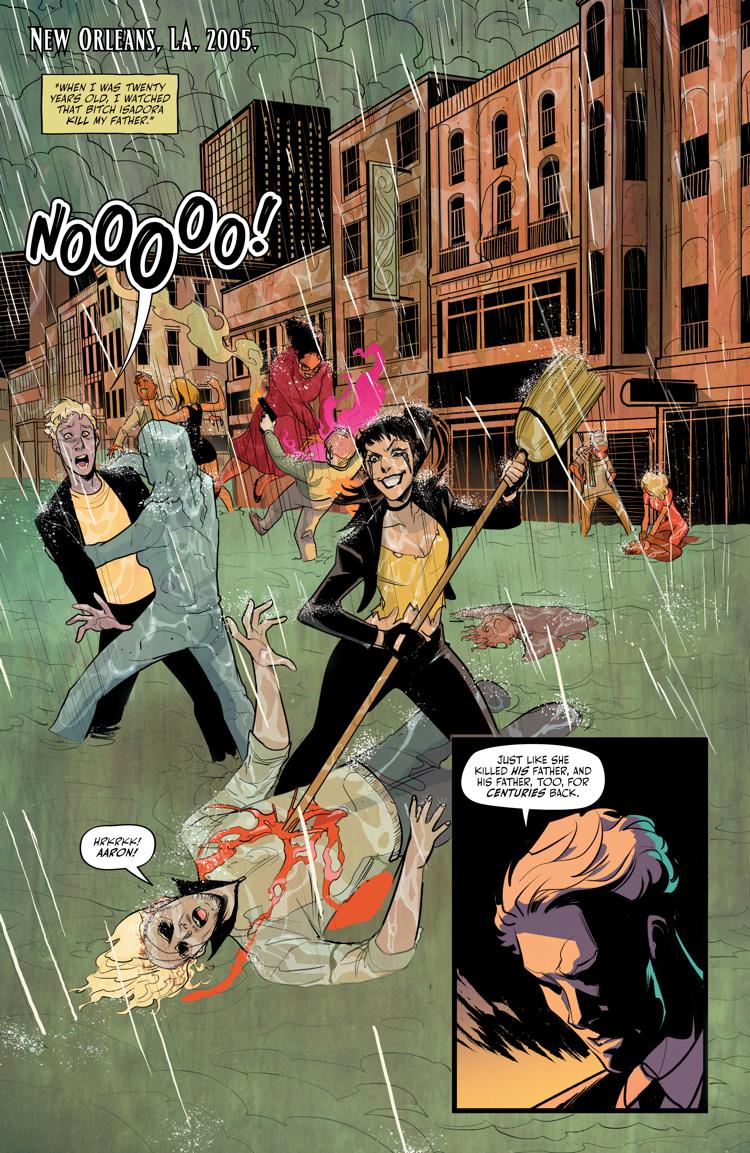 AL: Isadora is a force to be reckoned with. What can you tell me about her and the other witches?

BB: She really is! They all are, really. “Force” is a great way to put it. Witches have always been painted as monsters, but that really comes from who does the naming, doesn’t it? Witches are considered monsters—and horror characters—because men are afraid of women’s power. More on that in a moment.

I really love this coven of witches, our main characters in this first “Bothered & Bewildered” arc. To me, Hex Wives at its core is a love story between Izzy and Nadiya. They’ve been together for centuries. Our witches aren’t exactly immortal—they can be killed—but they’re reborn as themselves. Sometimes Izzy and Nadiya don’t find each other upon rebirth, but mostly they do. So, the central problem in their relationship in this book is what happens when they aren’t torn apart by death, but by the erasure of their knowledge of their history? Will they still come back together? As (for lack of a better word) brainwashed housewives living in this suburban simulacrum, they know something is wrong, but they can’t put their finger on it.

Izzy, our main entry point for Hex Wives, has a personality that’s as inspired by Mirka’s depiction of her as by the stuff that initially made me want to write her— “Bewitched,” Get Out, The Stepford Wives, etc. Mirka designed Izzy to be all sharp edges and angles; this speaks to the way she interacts with the world. She’s ready to fight at any moment. In “Bothered & Bewildered,” she doesn’t know this about herself. She just knows she’s overwhelmed with feelings of unease.

A fun game in initially conceiving of these women was basing each one off of a pop culture witch. So, Izzy is our Samantha. There are witches based on Wendy (from Casper), Queenie from “American Horror Story: Coven,” “Sabrina the Teenage Witch,” and a couple others that, to tell you, would ruin some story turns! But I sent all of this reference material to Mirka when we started working together, and she incorporated these inspirations into her clothing and character design. It’s pretty incredible. 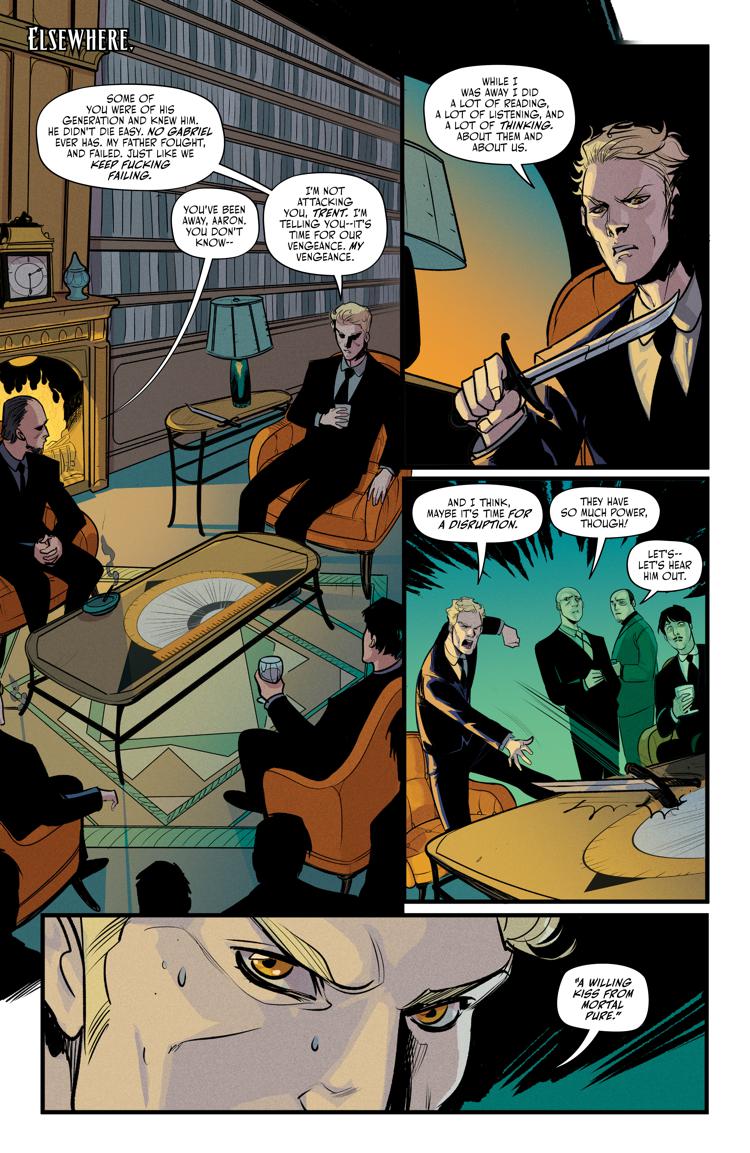 AL: What can you tell me about the Architects?

BB: I’ll say this: It’s no mistake that those who are trying to first kill then control the witches are a cabal of white men. They fear and are threatened by the women’s power, and so, for centuries, they’ve tried to destroy them. But the witches keep coming back. So this current generation of Architects, under Aaron Gabriel, decides to “disrupt” the system and try something different. They find a way to brainwash the witches to make them think they’re suburban housewives and that the Architects are their husbands.

AL: You and Mirka really capture the Stepford/“Mad Men in the suburbs” vibe. What made you choose to insert the witches, while in the 2000s, into the 50s?

BB: For all of the thinking that I did about Hex Wives over the years, this is very much a post-2016 election story. The Architects chose a 1950s suburban aesthetic because, to them, that was when America was “great” – when they weren’t threatened by “others” usurping their power; in fact, just accepting it without question. They think it was a “simpler time.” It makes sense that that’s the vibe of their cage for the witches.

Something really cool happened in designing the suburb of Desert Canyon that I didn’t anticipate. Because Mirka is Italian, she didn’t have the frames of reference for an American suburb. The first stabs at art came back with narrow lawns, more city vibes. Editor Molly Mahan and I gathered a bunch of references for Mirka from American pop culture— “Mad Men,” “Leave It To Beaver,” “Bewitched,” “The Brady Bunch.”

In translating these images, Mirka’s suburbs had exactly the feeling of horror that I wanted in this book: the feeling that while everything looks perfect, something is definitely wrong. There’s an uncanny feeling, an uneasy feeling, that came from Mirka translating a “classic” American suburb through her point of view. It’s just perfect. 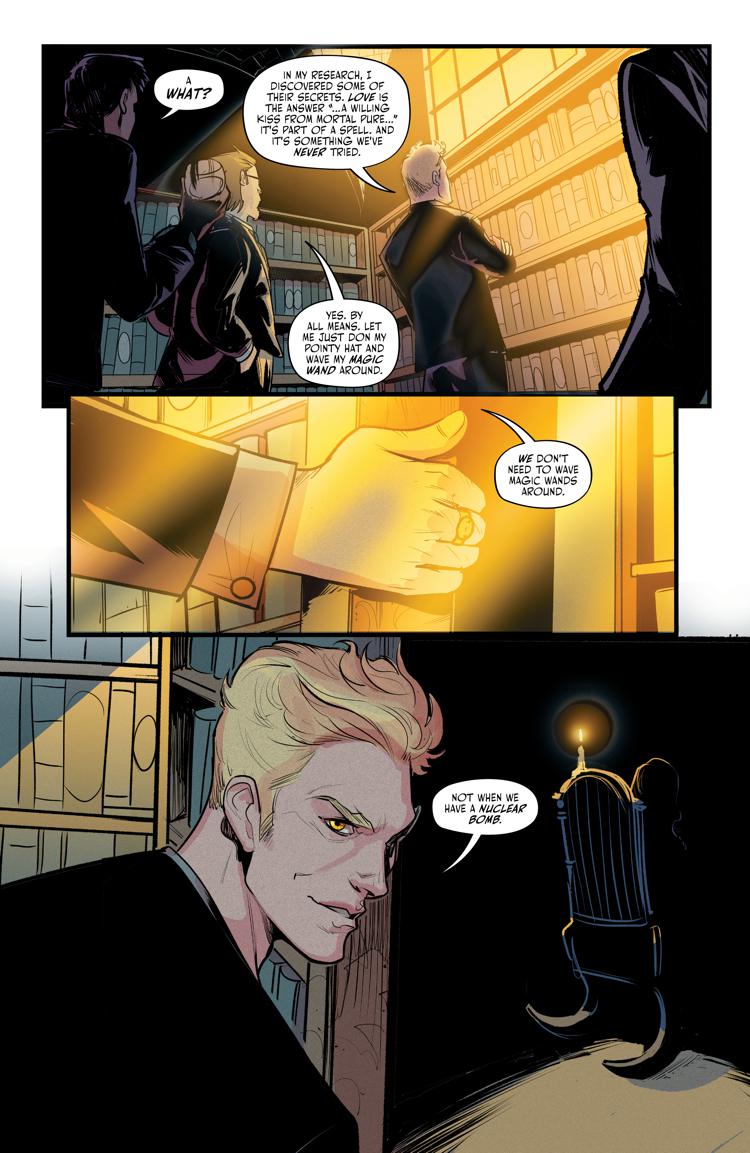 AL: As you’ve developed these characters, who has stood out to you as a dark horse, for lack of a better term? Any characters that have surprised you as being a riot to write as you’ve spent more time with them?

BB: Yes! A couple. I knew from the third panel of issue #1 that I loved Becky, but I didn’t realize how she’d come alive. While her look is based on Queenie from “AHS: Coven,” her personality is also based on the singer Lizzo, whom I LOVE. Please follow Lizzo on Instagram. She’s not only an incredible singer, but she’s funny as hell. She has equal parts joy and snark that is just irresistible to me. I listen to Lizzo’s “Coconut Oil” EP on a loop when I write Becky scenes because I want to capture that. And it’s been really fun writing a character who, when she discovers her powers, is like, “Fuck yeah! I knew I was special!”

I think my point is: if anyone ever makes Hex Wives into a TV show, please cast Lizzo. And have her sing the theme song. And be my best friend.

The other character who’s been a fun surprise for me is Mabel, but as a total counterpoint to Becky. Mabel’s look is based on Wendy from “Casper the Friendly Ghost”—but she’s a complete bummer of a character. She always looks on the bad side and is quick to get depressed; her depression comes out as a kind of seething dismissal. I loved the idea of this venomous sourpuss walking around in a red hoodie like Wendy, and Mirka nailed the look. Something happens in the third issue to isolate Mabel from the group, and I really relished writing her anger. It reminded me where the book came from.

Also, fun fact: her name is “Mabel” because “Mabel” is “Wendy” upside down, kind of. 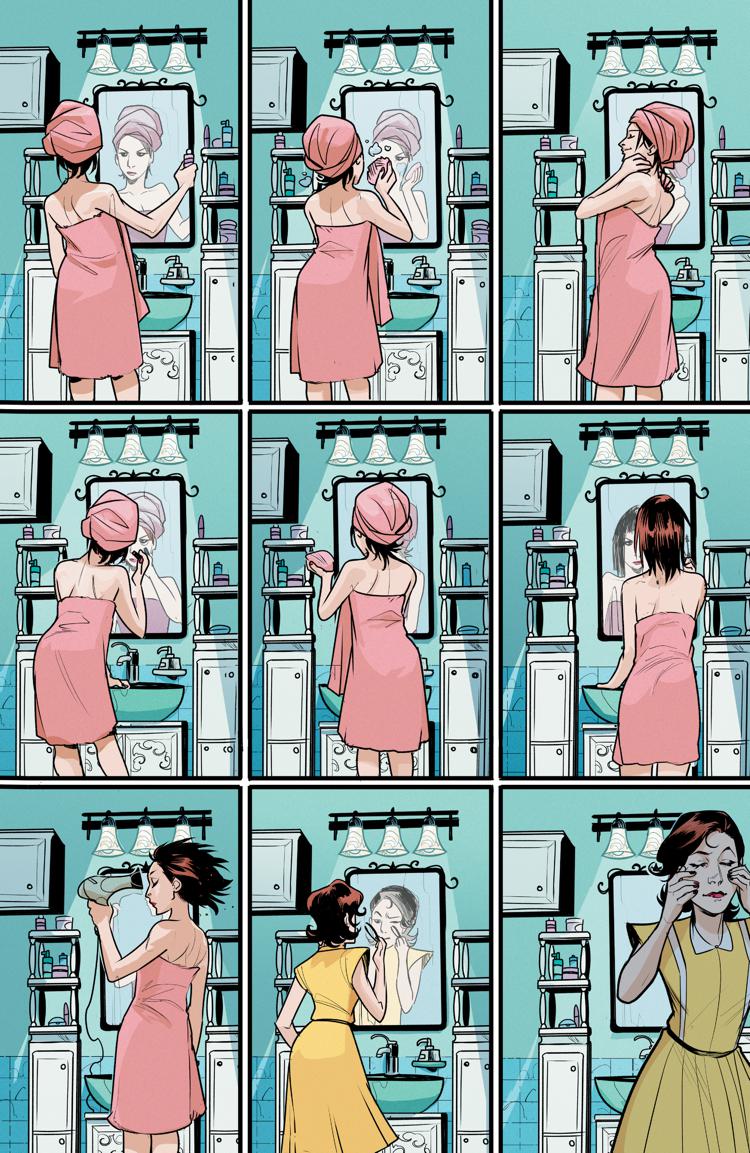 AL: Any final words for Comicosity’s readers about Hex Wives?

BB: Just that I hope people will check out this book and stick with it if they’re intrigued by the characters. I have 100 issues of these women’s stories that I want to write, and I feel a real responsibility to make every aspect of this book honest and get it right. A weird responsibility to the fictional characters whom I love, and also to my collaborators, editors Molly Mahan and Maggie Howell, Mirka, and our incredible colorist Marissa Louise, who brings so so much tone and emotion to every page. I love working with this coven—this incredibly talented people—and I hope we get to tell these stories for a long time.