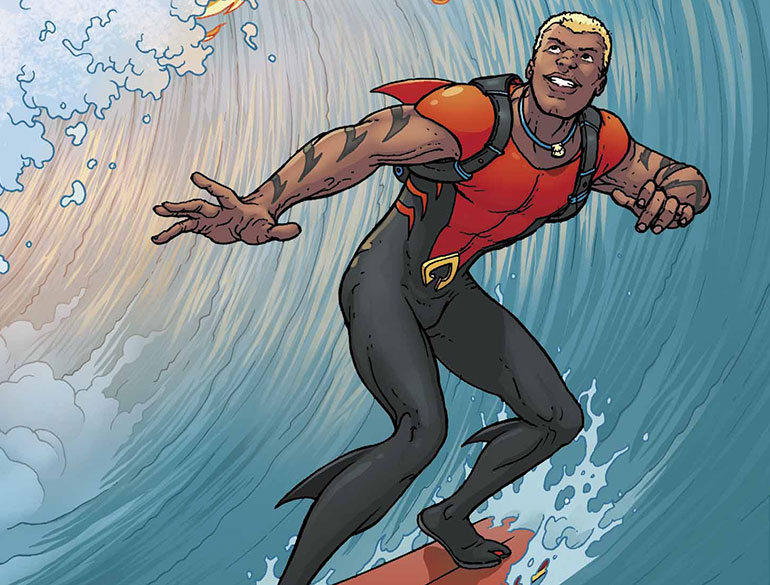 The wait is over. In this week’s Teen Titans, we’re finally reintroduced to Jackson Hyde, Aqualad of Young Justice fame — but will the Titans welcome him with open arms? Here to give us a little preview of what’s to come is series writer Benjamin Percy, who shares his thoughts on why Aqualad waited for the Teen Titans second arc, what his relationship with his mother really is, and who Percy sees as Jackson’s analogue in pop culture (think desert planet).

Matt Santori: Catching readers up to where you’ve been with Teen Titans, how do you feel this particular team works together so far?

Benjamin Percy: I think everything up to this point has been a prologue. This next issue could really function as a brand new #1. Up to this point, the team has been figuring each other out and just learning to trust Damian. And understand that they’re not having an easy time at that. He’s coming into his own as a leader. 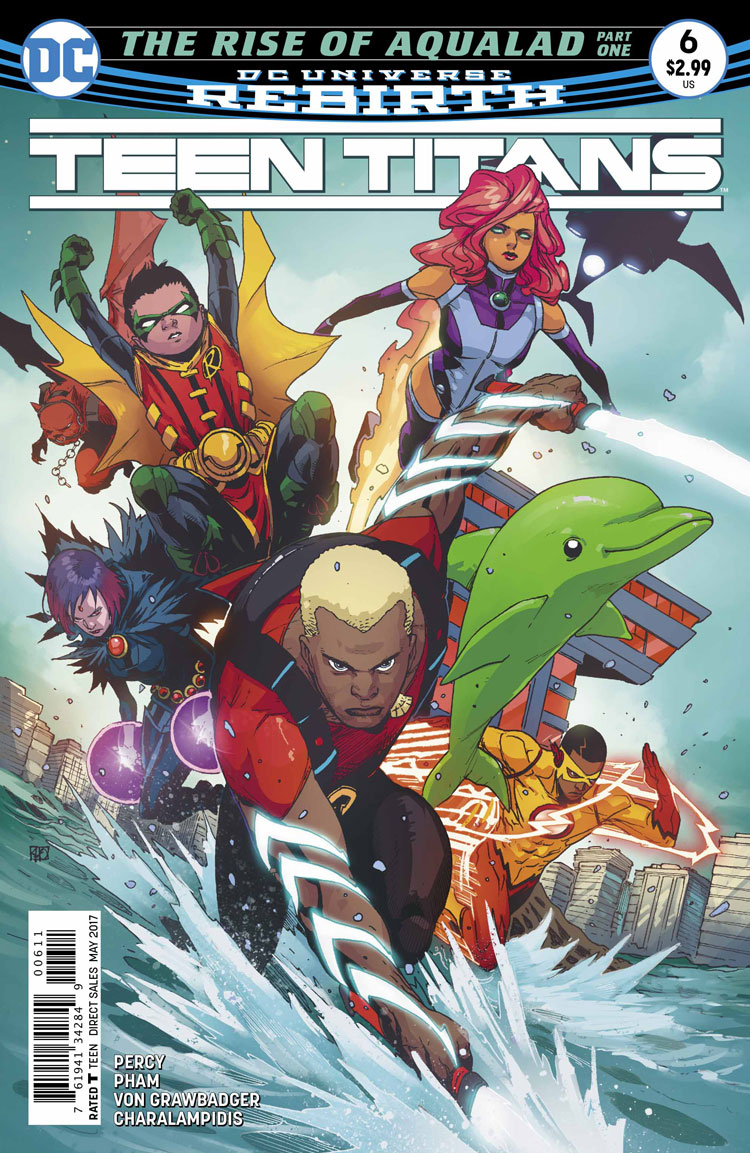 So the Tower has been erected and we’re ready to settle into the status quo for a new era of the Teen Titans.

MS: This week’s issue features the long-awaited arrival of Aqualad. Why hold back his arrival to the second arc?

Yes, it’s a team book, but there’s usually just one character that is the star at any given time. That had to be Robin in this first arc. This next arc belongs to Aqualad. I really wanted for him to have the spotlight and not to get lost in the scramble of those first six issues.

There was an initial discussion about whether we should shoehorn him into the first arc, but my contention was that it was too busy, and that he was too important of a character to get lost in the shuffle. I really wanted him to have his own story arc. 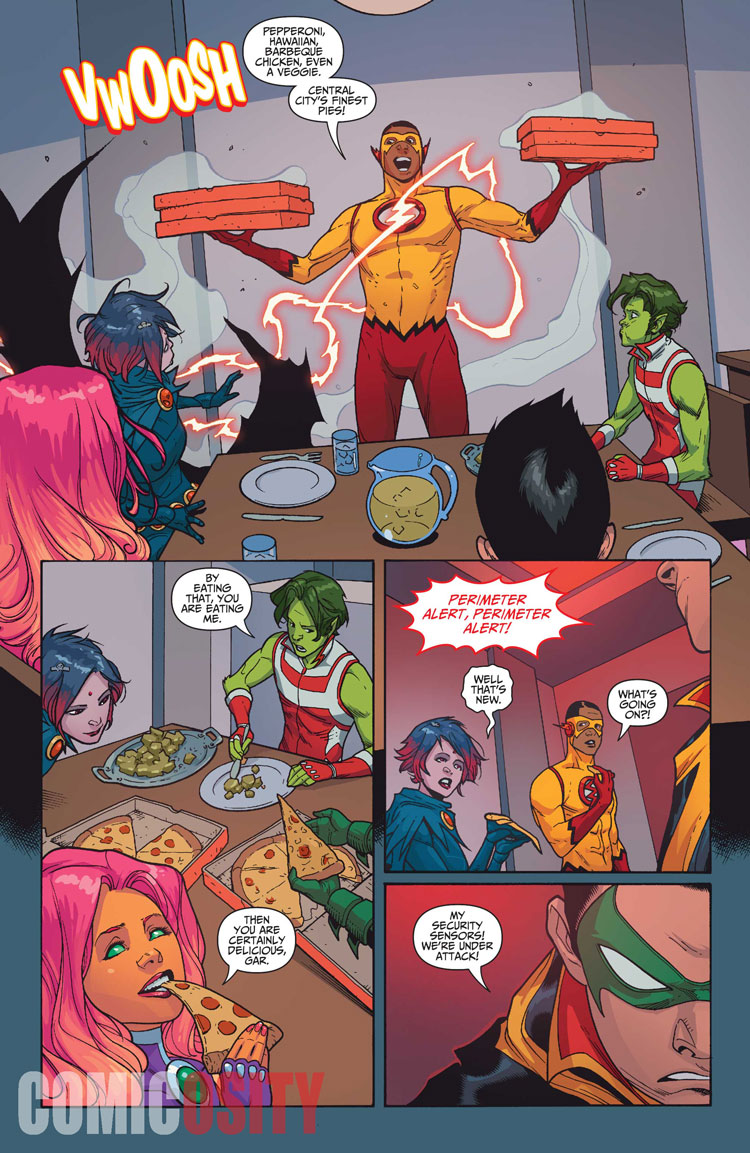 MS: There’s a bit of a gulf between Geoff Johns’ original version of Jackson Hyde and the now more familiar version featured in the Young Justice television series. Where are you and Khoi drawing more inspiration?

BP: You know, Rebirth is all about looking to the past and cultivating your favorite elements, moving into a future where creators are putting their own unique stamp on characters. Incorporating those legacy elements but also forging your own path.

So, yes, I was looking to Brightest Day, but I was also looking to Young Justice, which I think was a fantastic series. But really, Jackson is our character right now. We don’t feel like he necessarily belongs to anyone else right now. This is Jackson Hyde Year One, if you think about it that way. You’re seeing the foundation of the character.

The question that defines this first arc is “Who is Aqualad?” He’s coming into his own not just as a hero, but as a person. He’s grown up in this isolated environment, and there’s a prison motif that runs through the entire first issue. It applies not just to what’s happening to the Teen Titans in the Bay Area, and the jailbreak of all of those prisoners at the Del Sur Penitentiary. But it also has to do with Jackson Hyde growing up in a fishbowl environment, and him breaking out of that. 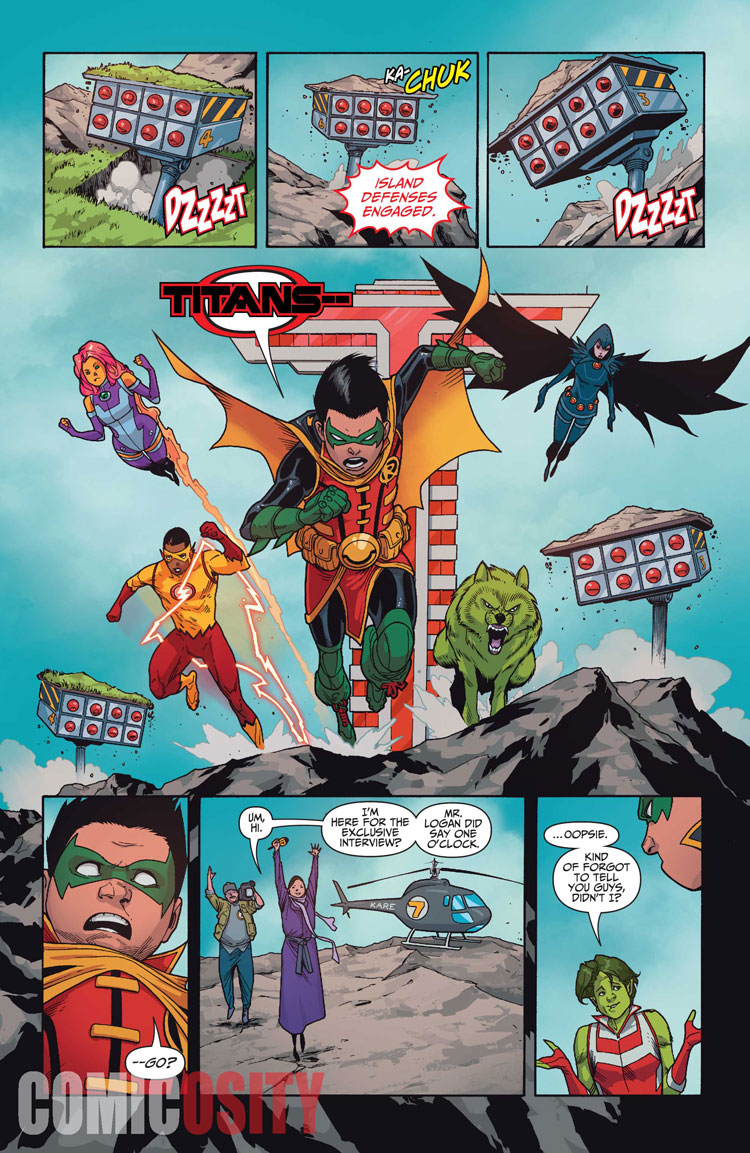 This isn’t an exact parallel, but it may be helpful to think of him as a kind of Luke Skywalker. Luke grew up on Tattooine, this desert planet, orphaned to these moisture farmers. He’s always dreaming. He looks to the horizon, always thinking there’s something waiting for him. Some sense of destiny calling to him.

In the same way, we have Jackson Hyde, who grew up in the scablands of New Mexico. And doesn’t know his family history. And is looked after by a hyper-protective foster mother. He feels in many ways that he can’t be himself.

But he has the agency now to break out of this environment, and we’re going to see over the course of the next six issues, “The Rise of Aqualad.”

MS: It also dovetails into something that seems to be more popular these days, which is developing these younger characters independently of their older counterparts. So, Aqualad separate from Aquaman.

BP: We’ll see Aquaman down the line, but we want to take our time on that. We want Aqualad to be his own marquee character. And then for him to be introduced to Garth in the upcoming crossover [with Titans and Deathstroke], “The Lazarus Contract.”

And then, only later — down the trail maybe 12 issues or so — he’s going to encounter Aquaman.

He’s not a sidekick. He’s coming into his own as a hero and as a character. 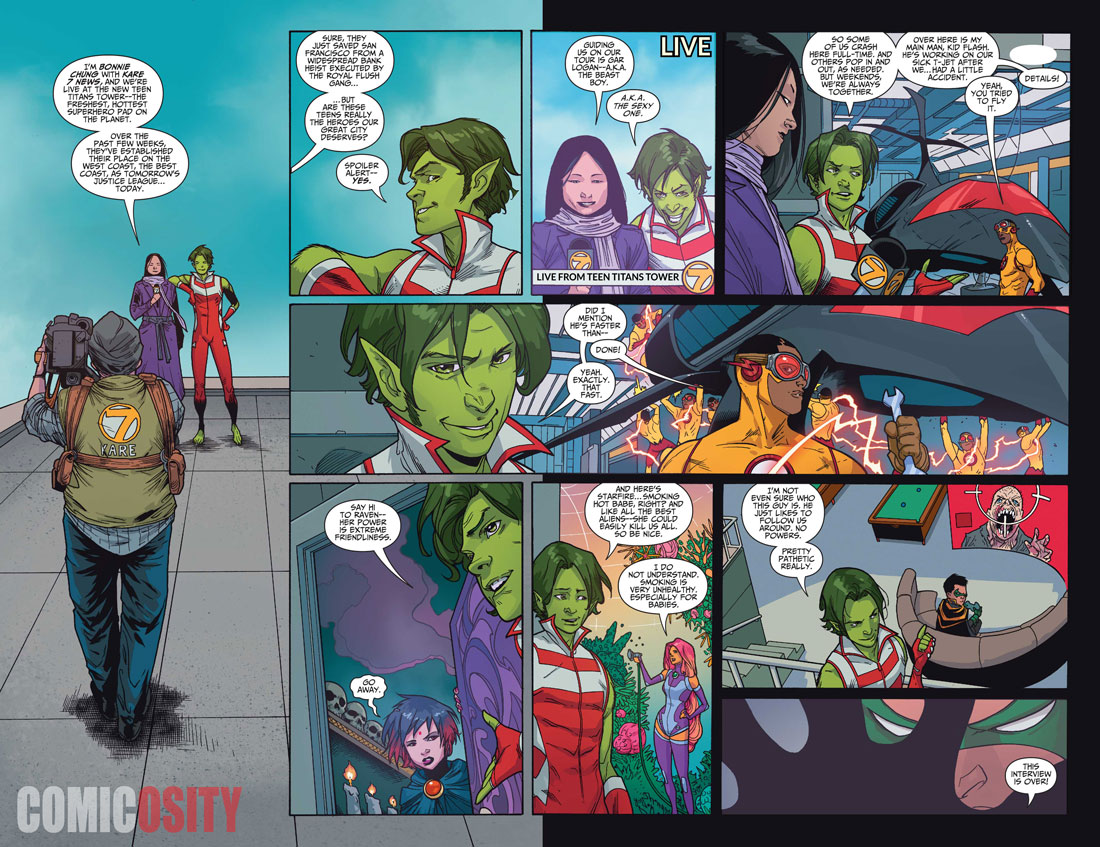 MS: One of the big reveals in the Rebirth special is Jackson’s sexuality. Tell me about the push, either by you or DC, to maintain gay characters on the Teen Titans line-up.

BP: Sure! I’m glad to be part of the queering of the DCU! Aqualad joins Batwoman, Midnighter and Apollo, and more as one of the marquee LGBT characters. America isn’t one thing. We need all sorts of heroes. I’m helping to create a kind of kaleidoscopic array of heroes. And I want the Teen Titans to be representing everyone.

And I’m really excited to be ushering in this new era for this character. 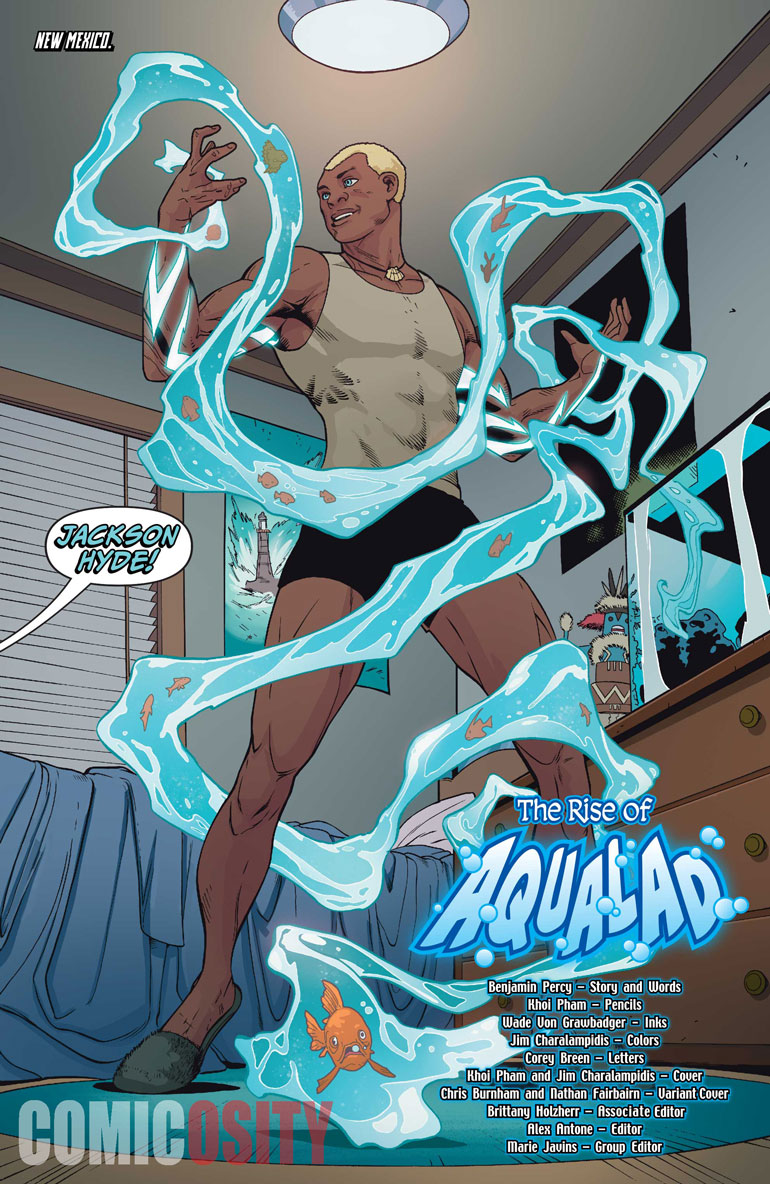 MS: One of the few bits we’ve had to date about Jackson is his relationship with his mother. It seems to have a bit more nuance here than most of us presumed from the Rebirth special. Can you talk about that a bit?

BP: She’s incredibly protective of him. And that’s because she made a promise. We’re going to learn more about that mystery soon. But she doesn’t recognize how suffocating their relationship is, that she’s sheltering him in a way that’s prohibitive.

Her main concern is that his powers will be discovered, and that he’ll be found by father, Black Manta. But that protectiveness extends to every area of his life, so his sexuality is also sort of crushed or muffled as a result of this.

But she loves him fully. She’s not a damning parent in any way. Instead, she’s one who wants him safe. In an ideal world, he’d still be two years old and sitting in her lap, reading him bedtime stories and not having to worry about the big bad world that could hurt him. 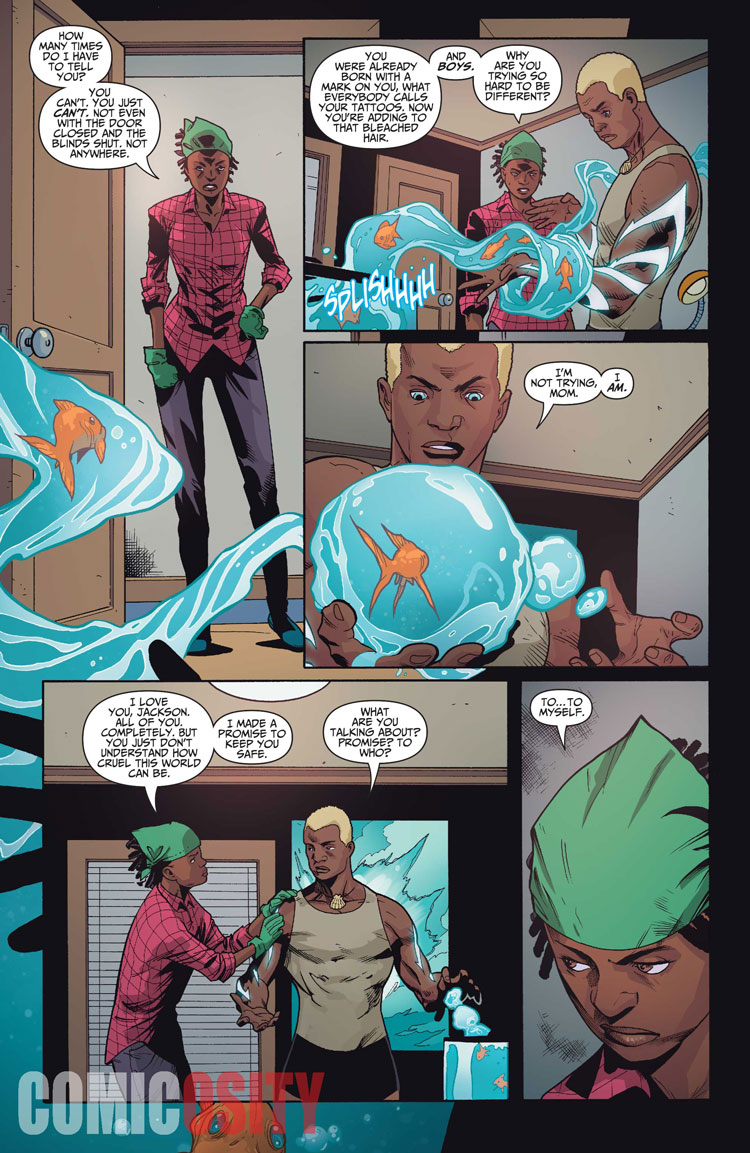 MS: How has developing the title (and Aqualad moving forward) been different working with new series artist Khoi Pham?

BP: Khoi is a hoot to work with! I really like the humor and the heart of his artwork. We have a really great relationship, sparring back and forth on email every week. We talk out not just the layouts, but also the storytelling. It’s a great partnership. I’m so glad to have him on board. 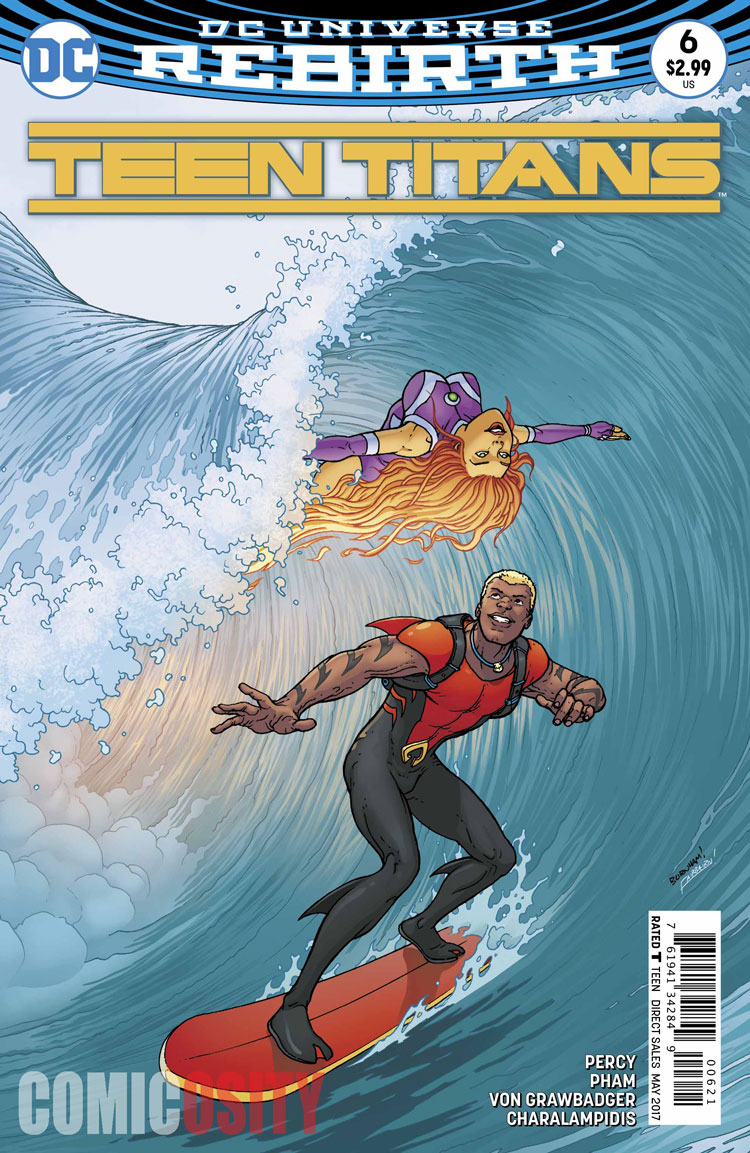 MS: Any final thoughts or teases you can share in advance of Teen Titans #6?

BP: Jaws is my favorite movie, so you’re going to see in these first few issues me tipping my hat to that film.

This is an arc that is sort of broken up, with this initial King Shark prelude, opening up to the Black Manta storyline. So, you’re in for a hell of a fun ride.