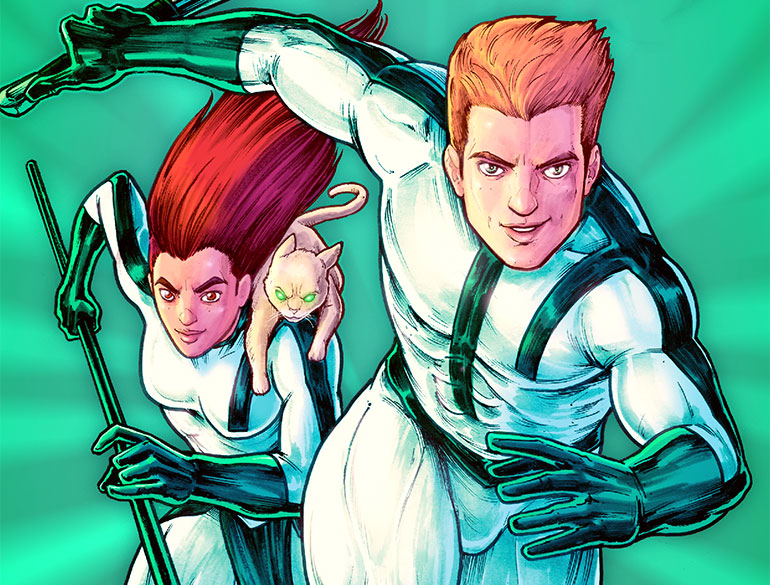 Queer characters and heroes are popping up nearly everywhere in comics these days. But even with the increased representation we’ve seen at DC, Image, and many other comics publishes, there’s still room for a first. Writer Brian Andersen (So Super Duper) is bringing his own life experience to bear by introducing the first gay, Mormon super-hero in Stripling Warrior. Self-published under Andersen’s own label, the three-part mini-series is seeing the release of issue #2 this week, and the writer took time out to chat about how he developed the lead character and why his journey is important to represent to those like him — and those who would see him cast out from his community. 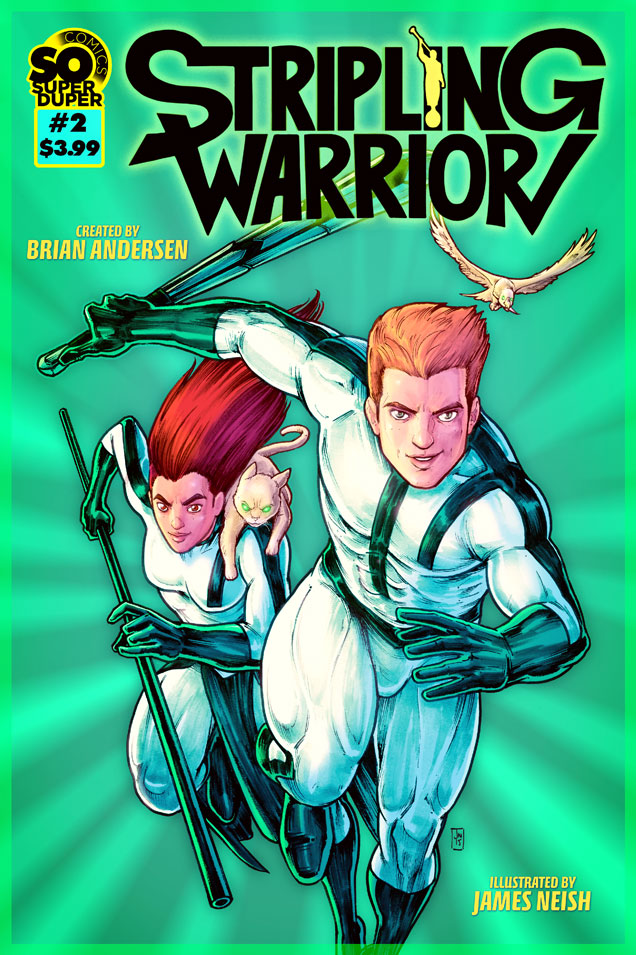 Matt Santori: Brian, tell me a little bit about the origins of your new hero, Stripling Warrior.

Brian Andersen: Well, I’m Mormon myself. I’m a convert to the church. I joined when I was eighteen, and went on a mission when I was nineteen to Guatemala. I served a two-year mission.

I think I was just standing in line in San Francisco one day at the beginning of this year, thinking back to my mission, and thought, I should do a comic book about a gay, Mormon super-hero. I am gay and I am still Mormon, not excommunicated yet. So, I thought, why not?

MSG: And in the time since then, a lot has changed with national gay rights and the Mormon Church’s reaction. How has that affected the development of the book for you?

BA: It definitely impacts me. I feel the change in the church, especially in regard to their recent announcements about gay married couples being apostates to the church, and that our children are unwelcome in the church. That struck me as very demeaning to me as a human being and as someone who used to go to the Latter Day Saints church.

My goal overall, though, was not to take the church down or expose it as an evil empire or anything. My goal is to take the mythology of the church — sort of like Thor and his Asgardian mythology — and give it a super-hero who’s gay. To show them that he’s gay and he’s ok. You can still be a worthy human being and be a homosexual. 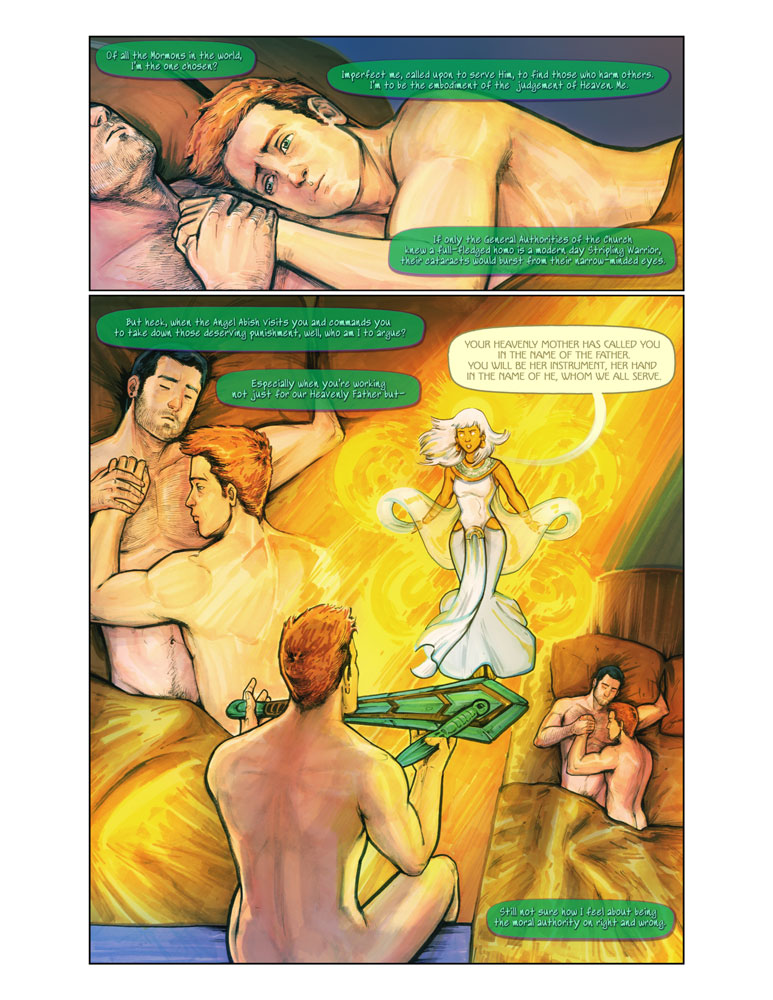 MSG: Can you share a bit about the mythology of the Mormon faith for readers who may not be too familiar?

BA: The Stripling Warriors are a group of young, warrior men who lived in Central America. Mormons believe that the Book of Mormon is a piece of scripture written by people who left Israel and sailed across the ocean to America long before anyone “discovered” it. They landed here and had all their godly adventures.

In the story of the Book of Mormon, there’s this group of young men who are righteous and were taught all their principles from the gospel. They went into battle, all two thousand of them, and not one was ever injured because they were so good and righteous.

MSG: In developing your central hero, you’ve established him as both gay and Mormon, but also newly married. Tell me what motivated that decision.

BA: This was, of course, before the Mormon Church came out against marriage, and even before same sex marriage was legal in all 50 states. I thought it was important to show that. Mormons believe that it’s fine to be gay as long as you don’t act upon it, so it’s impossible to have a relationship with a person of the same sex. To me, that’s complete b.s. “You’re welcome to be one of us, but you have to be a second class citizen. You can’t be married. You can’t have a family. You can’t have romantic relationships.” 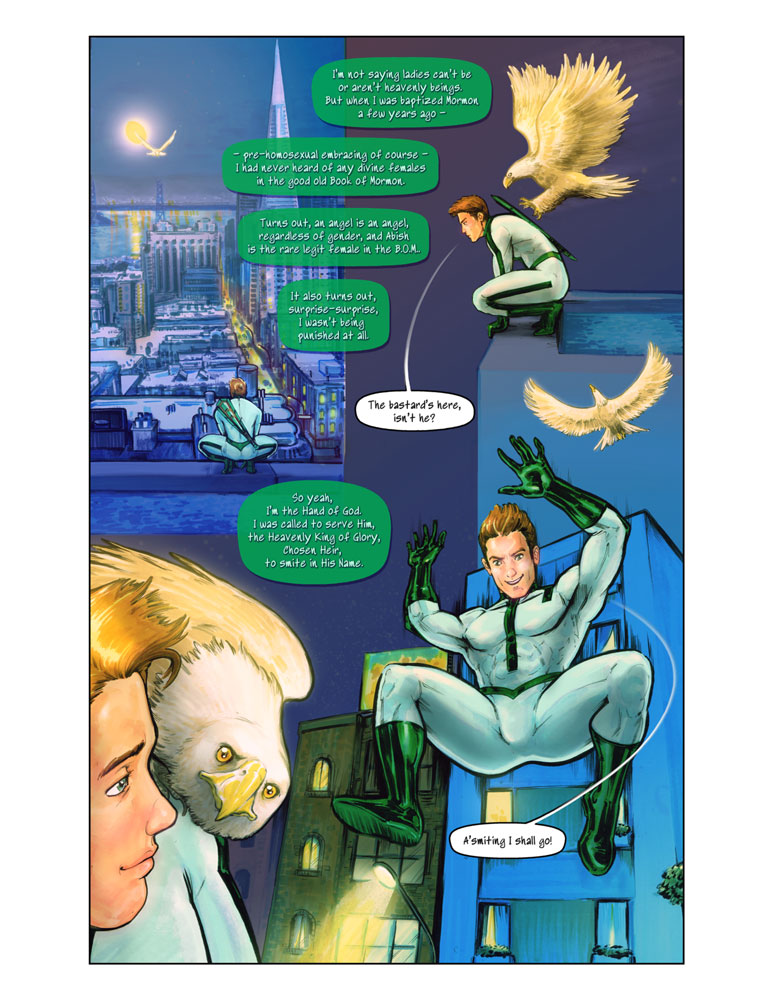 And I don’t think that’s right. That’s not what our lives are about. Our lives are about family and romantic relationships. Human connection. So, I wanted to have a character who was newly married, and have that be the particular time when the angel would come and say, “You have been called.” Not to justify, but to show that my marriage has as much value as any other.

MSG: That brings up an interesting question for me: who are you writing for? Other gay Mormons or those who don’t accept them?

As a kid, I grew up never seeing any homosexual characters I could identify with. But that never stopped me from loving the stories that I saw. I still love them. So the same is true here. Just because it’s a gay character, doesn’t mean you can’t enjoy the story regardless of your sexuality.

MSG: How is working with artist James Neish? 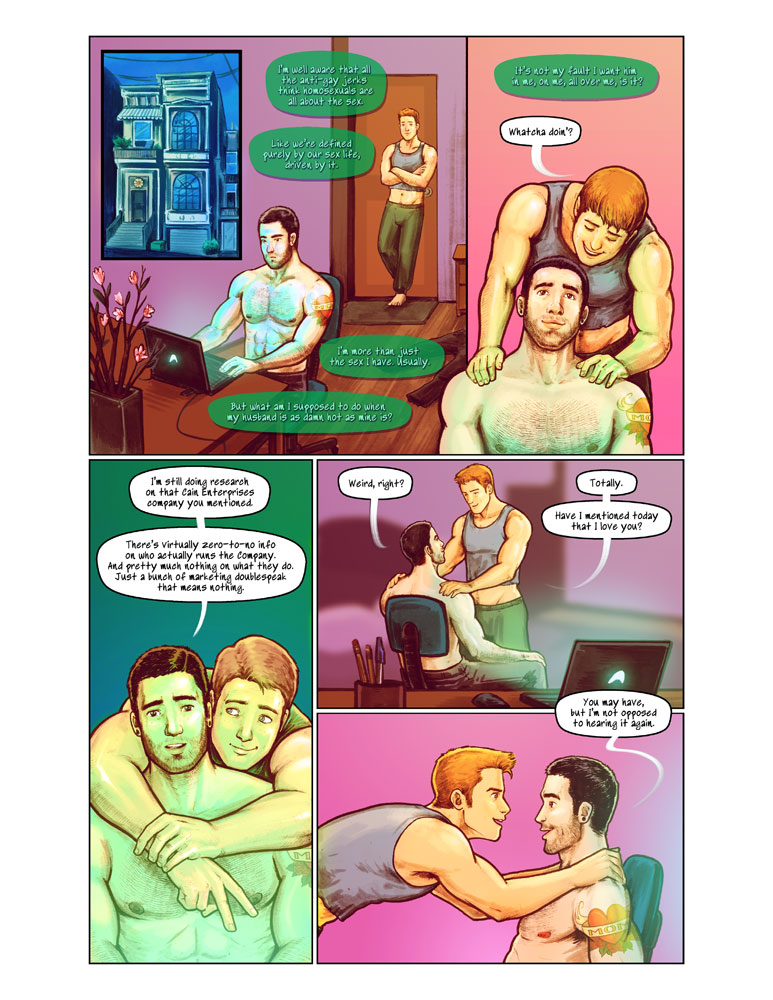 BA: He is amazing. He lives in Nova Scotia, and I actually haven’t even met him yet. He hasn’t done much mainstream work yet, and he’s crazy talented.

I like to give my artists free reign to do page layouts as they want and to do character designs from scratch. I want them to feel like it’s their project as well, and I usually have very few notes at all. Especially with James, because he’s just so good.

MSG: Going into issue #2, we have a brand new character joining the book.

BA: Yes. So, in the Book of Mormon, the Stripling Warriors were all male, but another key component was the warriors’ mothers. They were the ones who instilled righteousness in them. Fe represents that mother figure from the mythology.

MSG: And that’s interesting too, because with different divisions of the Mormon Church, women are able to have different levels of roles. Here, you have a woman becoming a hero equal to Sam, right away.

BA: I did that because he’s sort of a missionary to a certain extent. He’s called by God to smite those who are evil on earth. In the Mormon Church, missionaries always go two-by-two. I’m taking that idea, although it’s always same-sex, never opposite, missionaries. I wanted to have a woman and a man who are missionary companions, equal to each other in taking on this role. Often, women in the church are relegated to lesser positions than men, and I wanted her to feel equal to Sam. 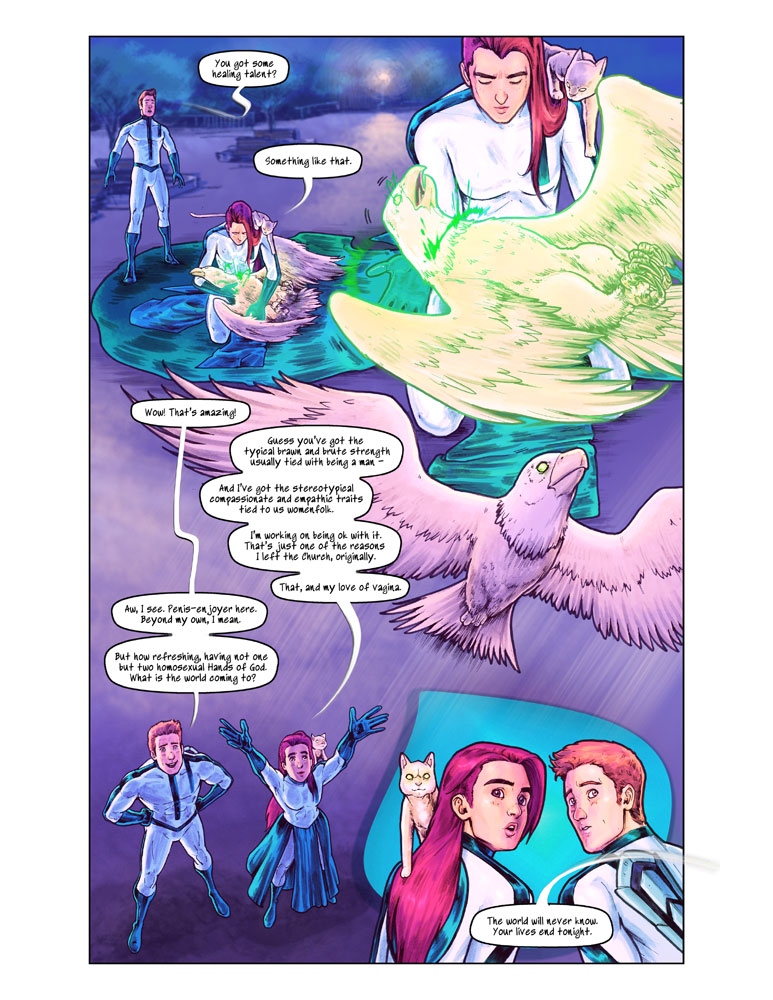 MSG: How are Sam and Fe’s spouses utilized in your story going forward?

BA: For now, they’re secondary characters for the three issue mini-series. I have limited space, unfortunately, although they do have a bigger role in the third issue James is already working on. They’re really support to them, like Mary Jane to Peter Parker. That’s their role for now.

But I want them to be positive, to love their spouses, and to have sex. I want sex to be a part of the book.

MSG: Any other thoughts about the book you’d like readers to know?

BA: It’s hard as a writer when you’re in your own mind to know how a story is being delivered. It’s sort of like, “Hopefully somebody likes this.” My goal is to tell a fun story with lots of humor — sometimes cheesy — and action in it. If you like super-heroes, hopefully you’ll also like this! It’s a story about an average man and woman who are called from on high to smite evil, and what that means for them. How do they feel about doing that when they’ve been told their entire lives that they are less-than, and they’re not?

Brian Andersen’s Stripling Warrior #1 and #2 can be purchased in print and download at sosuperduper.com.