Deadpool has rid the world of  highfalutin metaphorical pesky literary classics who inspired the world of Marvel superheroes he so desperately seeks to destroy. Alright, they’re not all dead, but at least he did some MAJOR damage! So, what brings Deadpool to the realization that the only way to obtain his goal is to kill Deadpool? We went to the master of Deadpool-Murder-Inc. Cullen Bunn for the answers. 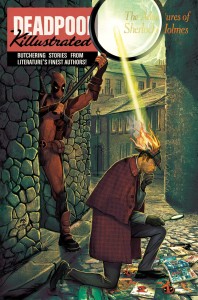 Cullen Bunn: It’s hard to believe that a story could get even more insane than the simple tale of Deadpool trying to kill every single Marvel character… but that’s exactly what happened. When my editor, Jordan D. White, and I started talking about doing  a sequel to DEADPOOL KILLS THE MARVEL UNIVERSE, we knew we had to do something bigger… and even more unexpected… than what had come before. We tossed a number of ideas around, everything from “Deadpool Kills the Marvel Zombies” to “Deadpool Kills the Cosmic Universe” to “Deadpool Does Secret Wars.”

But it was this notion of Wade slicing and dicing his way through classic literature that we landed on. It was weird and different to begin with, but when I started considering the idea of connecting dots between literary characters and the heroes and villains of Marvel, I got really jazzed about it. Thus, DEADPOOL KILLUSTRATED was born! Building some connective tissue between this and the previous series just upped the ante in terms of strangeness.

With the third series, DEADPOOL KILLS DEADPOOL, we wanted to do something that was, again, off-the-wall. We also wanted to put a nice bow on everything we had done so far. It seemed only natural that Deadpool try to kill all the other versions of Deadpool that ever existed. And to give it a little more “oomph!” we connected the story to “our” Deadpool in the main Marvel Universe. Now, everyone who said these stories “Didn’t matter” because they were alternate universe stories will eat their words!

They’ll eat their words, I say!

Never has a more important Deadpool story ever written!

JB: By the beginning of Deadpool Killustrated it was clear that he had accomplished his goal of clearing the world of superheroes. So, how does Deadpool going after himself fit into this storyline? 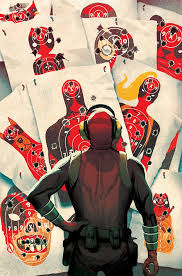 CB: This death-hungry version of Deadpool (I’ve started calling him Dreadpool in scripts) has never actually managed to kill off all the other super heroes. He’s hopped from one alternate reality to the next, killed world after world, but there always seems to be another world full of costumed characters waiting just around the bend. Even when he’s killed the entities he’s believed to be “the progenitors” he’s found that they were just alternate versions of the creators of these universes. That’s why he went into the Ideaverse in DEADPOOL KILLUSTRATED, hoping to destroy the very inspiration for the comic book world.

But he has not accomplished his goals yet.

So… why does he turn against all the versions of Deadpool? There’s a reason, but we’re not gonna reveal that until DEADPOOL KILLS DEADPOOL is released.

JB: Are there only going to be Deadpools running around different dimensions or how many variations of Deadpool have made it into this four issue storyline?

CB: You will not believe the number of Deadpools who will be appearing in this series! I won’t say that you’ll see every version of Wade to ever appear in comics, but it’s close. Many fan-favorite Deadpools have starring roles in the book, as do some versions of the character that have previously appeared only in one panel. You’ll also be seeing a bunch of new incarnations of the Merc With a Mouth.

And all of them are potential targets.

JB: Have some heroes survived the first killing spree showing up?

This series will be focused on Deadpool and his various incarnations almost exclusively. You won’t be seeing much of other Marvel heroes. Deadpool and the Deadpool Corps are facing the apocalypse alone.

CB: How do you approach climbing into Deadpool’s head as opposed to a more traditional character like Wolverine? Any rituals you have to complete or people you know you have to talk to before you begin writing a character who is so off book from the rest of the standard Marvel Universe? 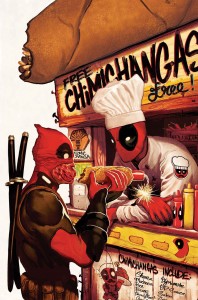 CB: Really, the only way to approach writing a Deadpool comic is to get really, really drunk by downing shots of Montezuma tequila; eat a two-pound bag of Sour Patch Kids; and watch a bunch of Adam Sandler movies back-to-back-to-back. Then, before passing out from intoxication, sugar high crashes, and Sandler overdose, start typing. Script format? Balderdash! Spell checking? Only wimps spell check! Auto-save? Live free or die, baby! Days later, I wake up, look at the Etch-a-Sketch where I’ve scripted the issue, and see what I’ve got.

Actually, I don’t know if there’s really a ritual to get ready for writing Deadpool (or any other character) other than reading and re-reading some of the great stories that have come before. Digging into some of the stories I’ve liked best can help me get a feel for the characters voice.

Also… and this is no joke… when I get ready to start a new comic, I catch myself talking to myself quite a bit, often in my very best impersonation of the character I’m writing.

JB: What has been your favorite Deadpool moment to write so far?

CB: Tough question… because I’ve enjoyed so much about these three series. I loved writing the Deadpool/Taskmaster/Man-Thing sequence in DEADPOOL KILLS THE MARVEL UNIVERSE. The Ghost Rider/Headless Horsemen bit in KILLUSTRATED was fun for me, too, but mainly because I LOVE Ghost Rider and the Headless Horseman! Actually, connecting the Marvel characters to literary inspirations was fun for me all the way around. In DEADPOOL KILLS DEADPOOL, there have been a few spoilerific moments that have been fun. I guess it may be a character flaw that I enjoy writing the most tragic moments of the book.

Also, issue 2 sees the introduction of my favorite version of Deadpool… ever!

JB: So, does this mean that’s it for Deadpool, lights out for himself in the end or could there be a higher calling for him once this third installment wraps up?

CB: One way or another, whoever wins this fight, Deadpool dies!

But I’d be remiss if I said you’ll never see another really strange Deadpool story from me in the future. If anything, the Killology or Killogy or however the historians of future days refer to this… the greatest of all slaughter-happy comic books… has taught us that there are few limits to Deadpool stories.

If I do more, it will be as unusual and unpredictable as these last three.

Deadpool Kills Deadpool #1 hits the stands on July 3, 2013 from Marvel Comics. Consider it an early birthday present for America… and the rest of the world!