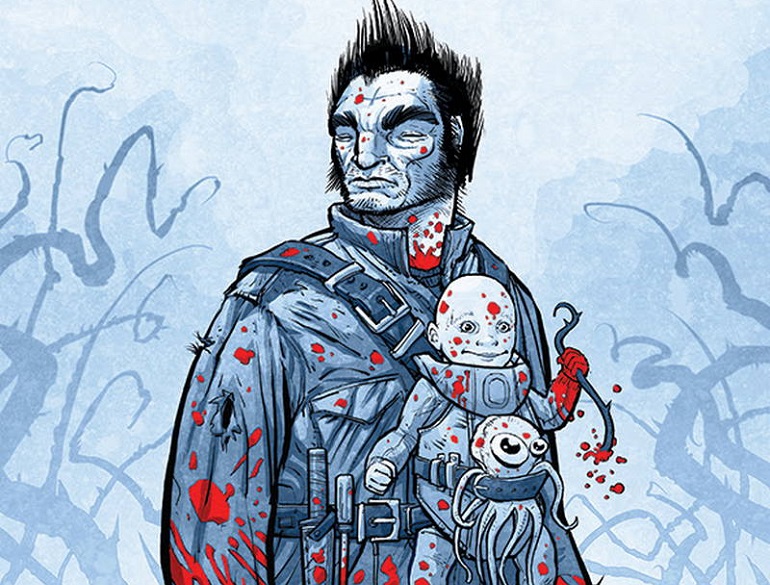 Action, gore and a wry view on life has lead writer Justin Jordan through a cornucopia of super-human characters, both cosmic and down to earth. Now, he’s created a new team of special people, and this time one of them is a baby who can help stop the Spread; an evil and violent plague that has ripped civilization apart. While many at Heroes Con in Charlotte, North Carolina may have been asking Jordan to sign Green Lantern: New Guardians or Luther Strode volumes, the questions were swirling about SPREAD. Fortunately, he answered my questions and showed off his familiarity with Whitney Houston.

Jessica Boyd: How did the idea for Spread come about, how long have you been living with this story in your head?

Justin Jordan: Two years? Give or take. It’s hard to say because, and this gets into the question of where the idea came from, Spread comes from a couple of different ideas that finally came around to each other and made this.

One was the idea of a Lone Wolf and Cub style father and kid duo wandering around a post apocalyptic setting. Another was being interested in what happened decades after something a zombie apocalypse, assuming some humans survived.

The last piece of the puzzle was an article talking about different cellular energy systems that might have once existed. So I got the thinking about a supervirulent ecosystem, and that mixed with the others and….Spread happened.

JB: Do you have a lot of experience with children, and perhaps specifically babies, yourself?

JJ: Probably a middling amount. I don’t have any kids, myself. I DO have a close family where I’ve seen kids grow up and a best friend with four sons under the age of eight. So I got to see a decent amount of kid and baby raising.

JB: Do you “believe children are our future?”

JJ: Only if we teach them well and let them lead the way. Otherwise, no.

JB:Besides a new genre, what do you think is the biggest difference between Spread and Luther Strode?

JJ: Hmm, hard to say. I mean, there ARE loads of differences – Spread is near future, has monsters, set after a (sort of) apocalypse, and has shocking little Petra. So one of those, probably. I think it’s probably something readers of Strode will like, but I think they’re pretty solidly different animals.

JB: Just like Strode, this book is hyper-violent, perhaps, because of the contagious and bloody antagonists it might be more so. What attracts you to high gore and body counts?

JJ: I’m not sure. I certainly liked violent eighties action movies and bloody eighties horror movies when I was growing up, but it’s hard to say, chicken or egg style, if that was the cause of me liking it or because of it.

I know one of the reasons is that it lets me act emotion of a big scale in the work. There’s something operatic about that, I think. The stakes are raised and it heightens everything. Or something. I don’t even know.

JB: Your artist, Kyle Strahm, seems to have this uncanny ability to make the gruesome beautiful and frightening at the same time. What brought your team together?

JJ: Kyle I met a couple of years ago at NYCC, although I knew and liked his work in We Will Bury You. Back in….2012, I guess…Kyle said he like to work with me, if I had any projects that’d be right for him. And indeed, I did! Kyle was actually the artist I was seeing in my head when I thought about the book.

Felipe Sobreiro, the colorist, I had, obviously, worked with on the Luther Strode book. He and Kyle had worked together on a short thing, and I loved his work on Strode, so that seemed like a natural fit. And between the two of them, they make me look good, which is nice for me.

JB: There are lots of horror elements to this book, along the zombie vein with people immediately being infected. However, you’ve thrown curveballs into the story with how the main characters No & Hope and how they react to the contagion. It could be scientific, it could be supernatural… is this part of the mystery?

JJ: The origin of the Spread and, actually, the nature of it, are both mysteries that are going to be answered in the series. The origin one, sooner rather than later, actually. So I won’t string that one out too long.

One of the things I wanted to do was show a world where people have adapted to the monsters. Humans can get used to anything, given time. We’re adaptable. The Spread, while incredibly dangerous and scary, is a known threat to the people living in the quarantine zone.

Of course then the Spread starts doing new stuff and throws that out the window.

JB: Is your leading man, called No, more of a John Wayne or Clint Eastwood peacekeeper?

JJ: Oh, Clint Eastwood. I mean he doesn’t look like Clint Eastwood but his personality, at least initially, is meant to evoke characters like the Man With No Name. He’s got a lot more going on than is obvious at first glance, but I was definitely trying to create a certain kind of hero.

JB: How far out do you have SPREAD planned? Is there a clear ending or issue amount in mind?

JJ: There’s a definite ending. How far out that ending is will depend on the book sells. I’ve got arcs planned out for about sixty issues of it, give or take, and I’d love to get there. But I can tell the story I’ve got effectively in 24 issues, if need be. But I really, really want to go the distance.

JB: Anything else you’d like to tell the Comicosity audience?

JJ: The book is going to be packed with action and horror, so clearly everyone needs to read it. If they want. I guess. Maybe.

Spread is available July 9 at your local comics shop for $3.50, or you can get a DRM-free digital copy from Image Comics for $2.99… or get both. Let your fandom… spread.