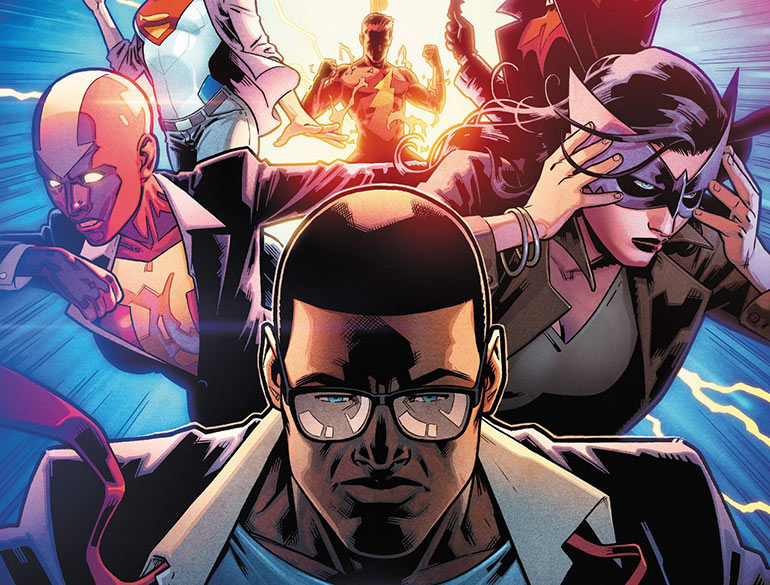 It’s been a long haul for Earth 2. Ever since the events of World’s End and Convergence, the heroes of that parallel world have been refugees of one war or another, losing one planet and now another.

Now, writer Dan Abnett is a man with a plan — taking this crippled Society and at last, introducing them to a brand new Earth 2 in issue #17. Abnett sat down with Comicosity to discuss the latest developments, what characters will get the spotlight moving forward, and why now is a great time to jump on board the series.

Matt Santori: Earth 2’s had a lot of ups and downs over the past two years, now going on its third planet. Talk to me a little about how you got from point A to point B with the book.

Dan Abnett: Ha ha! Well, I think you put your finger on it. Earth 2’s been a great book. It’s had some fantastic storylines, but it’s pretty much always been on an epic scale. And as you rightly point out, they’ve gone through two planets. It’s always been this sort of end-of-the-world, apocalyptic stuff. 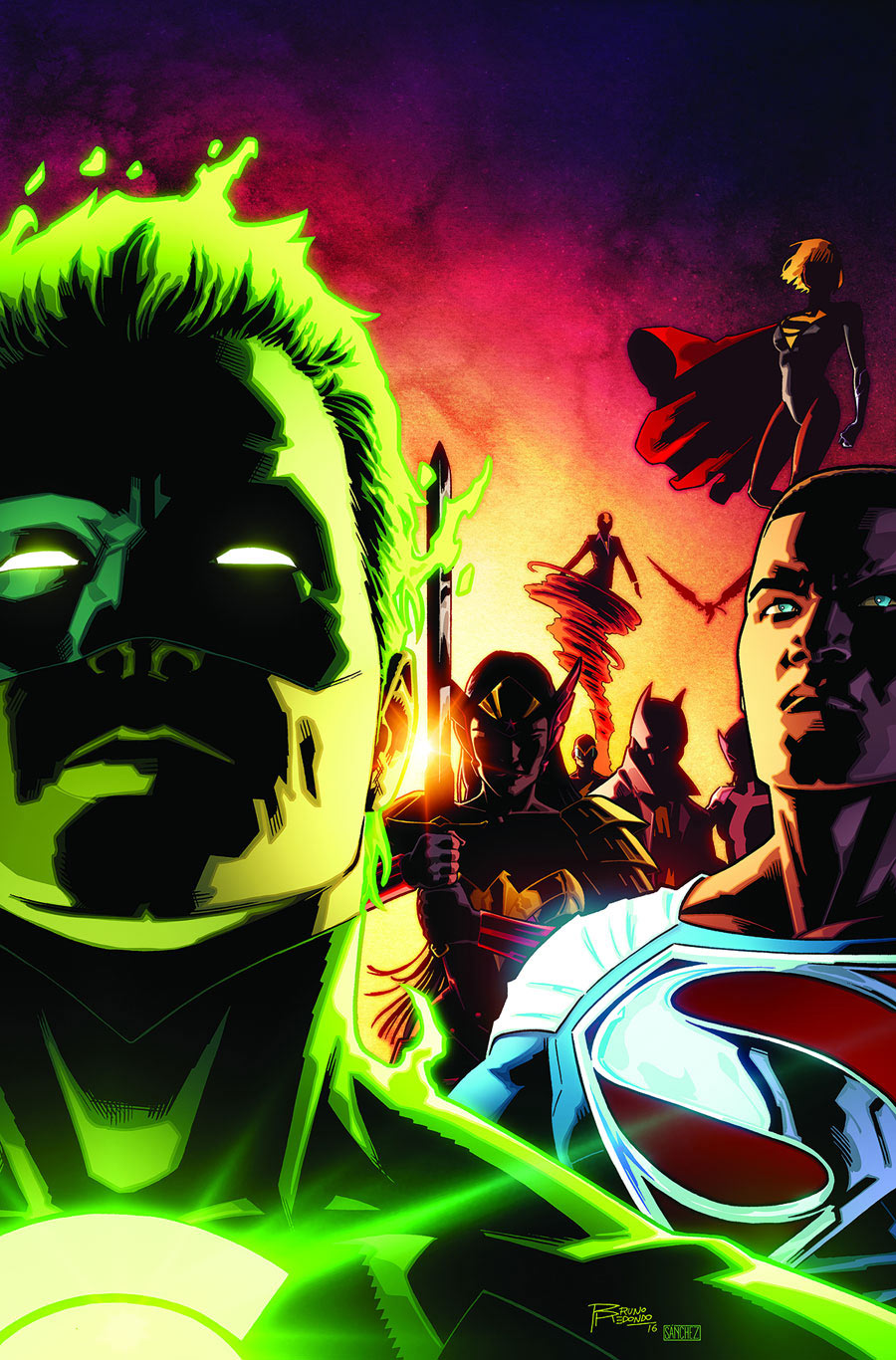 When I asked to take up the book at issue #7, I became aware that there was this immense legacy of absolutely catastrophic things that had happened. The characters and the world were in a pretty dangerous state.

So, I decided to do two things. The story I’ve written so far has been trying to explore what it’s like to be living on an imperfect copy of your home planet. It’s a survival story that just happened to have super-heroes in it.

But with the storyline we’re in now, I decided it was time to do something drastic — to perhaps course-correct the increasingly apocalyptic things that have been happening to Earth 2. So, yes, we are about to have a third planet, it’s more a case of trying to restructure the book into something more manageable.

There are such great characters and I want to be able to tell stories on a smaller, less global scale and interact with the characters in a more interesting way. And that means rectifying some of the big problems.

This story is a bit dramatic and I might say, quite strange. It’s a way of trying to bring Earth 2 back into a manageable state that I think the fans are going to want to see. 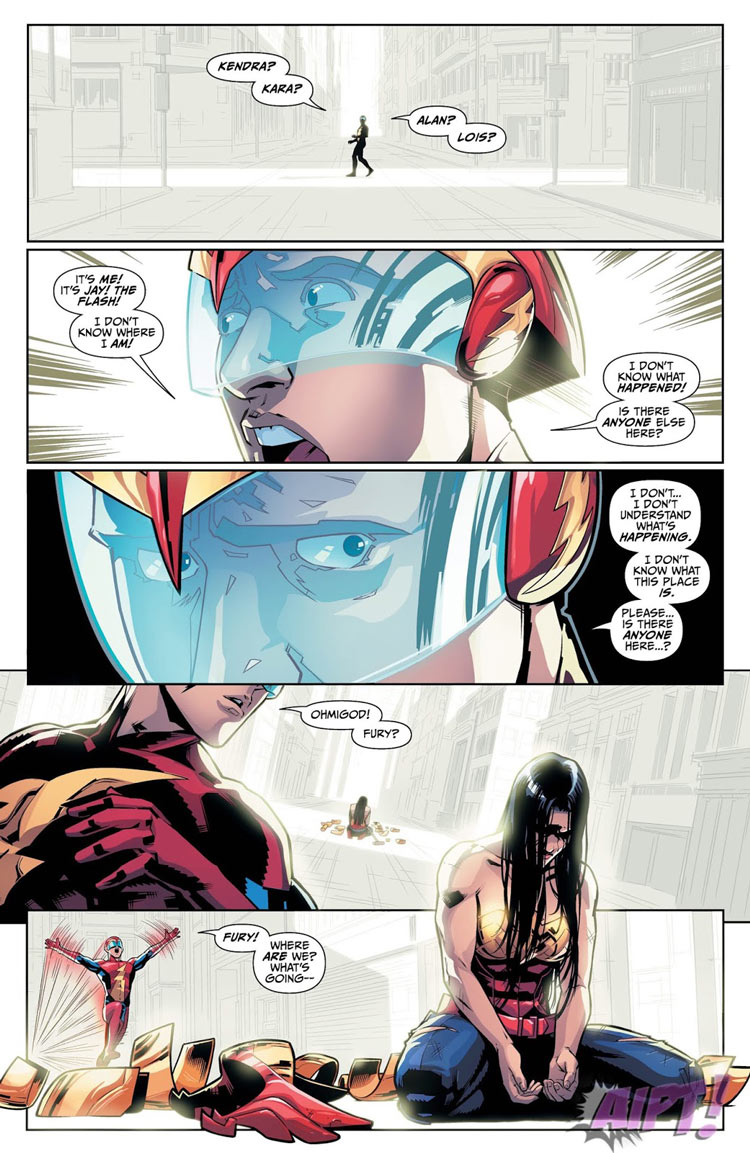 MSG: So far, we’ve seen 9 heroes “outside” in the breach — 10 with Green Lantern, who I don’t think we’ve seen. Is that what bringing the cast down to a manageable size looks like?

DA: I think there is definitely a group of about 9 or 10 characters that I’ve been using as key figures, and I think they are the ones that most fans see as distinctively “Earth 2.” They’re the ones that have distinctive versions from the regular continuity or are specific to Earth 2. Those are unique to this book and that’s a really important reason to use them.

Technically, Earth 2 gives us access to any DC character that we could do another version of. But what I wanted to do is take those 10 characters that are in the book at the moment and treat them like they are in the eye of the storm. They are the constant. The bits that don’t change as the world changes around them.

Ultimately, we may meet all sorts of other Earth 2 characters, but they will have been born out of the memories of the world that is formed around them. These 10 [Flash, Fury, Hawkgirl, Power Girl, Huntress, Red Tornado, Green Lantern, Superman, Batman, and John Grayson] are our primary cast, the ones that have made the transition and remember what has come before. That marks them as distinct from anyone else they encounter. 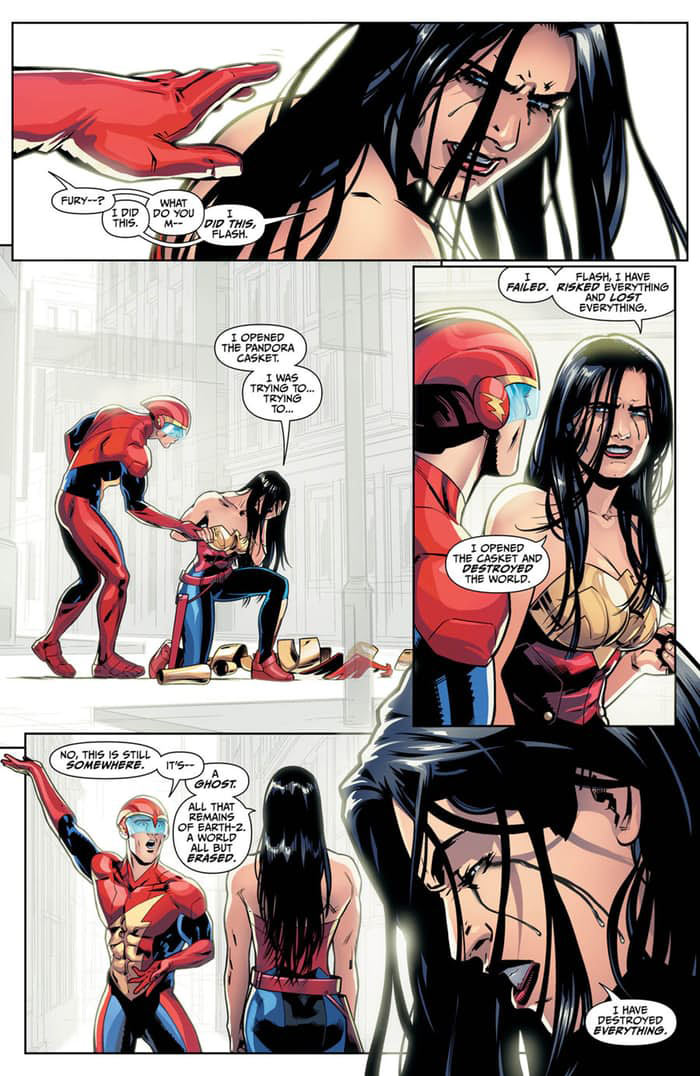 MSG: I think one of the most interesting things for me right away in issue #17 was the Sandman being used as some sort of anti-virus for this new world. What drove you to that decision?

DA: Yes. I wanted to try to show the transition of the planet in ways that are visually distinct and unusual. The idea is that when they first arrive, it’s almost blank. A diagram of the planet that Bruno Redondo rendered beautifully. You can sort of poke holes in it and see reality behind it.

I wanted obviously to make a comic that includes great conflict and drama, so I needed a threat. Dodds’ Sandman character has had such a strong presence in the book so far, but he’s also sort of sinister and controlling. You could see him as a kind of dystopian police force. And wouldn’t it be really interesting if the world reacted against them because it is being policed by multiple Sandmen? Sort of an immune system reacting against intruders.

Behind the folds of this diagram, there are just so many of these things, and they keep multiplying and coming out from every angle. It’s really creepy and nightmarish. And I hope not what you’re expecting from the story. 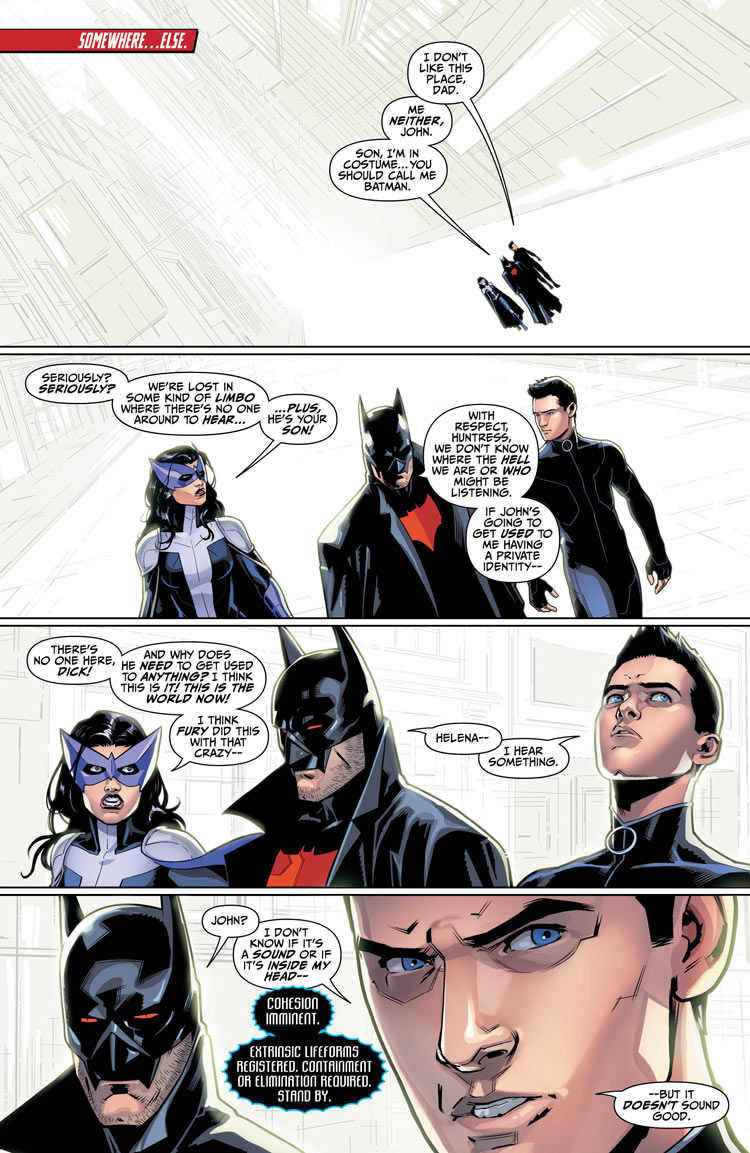 MSG: How has it been working with artist Bruno Redondo on the new storyline?

DA: First of all, let me tell you: Bruno is fantastic. He’s an amazing artist. I has already been working up what I wanted to do with the book before I knew who would be drawing it. Then I was told it was Bruno. I tried to give him as much information as I could about how I saw all of this working. But obviously, the moment he started turning in his first few sketches and designs and pages, I knew that he had just got it.

He’s a tremendously good visual storyteller and he’s dealt with this slightly unexpected strangeness so well. Within the first few pages I got back, I knew I could go ahead and invent, and trust him entirely with finding a way to make it work.

I think the strength of his storytelling is so great. I have reduced the cast, as we said, but we’re still talking about probably a dozen or more characters interacting, often in group scenes. That is quite the tall order. He’s done it really well. There’s wonderful flow throughout.

And his visualizations of the stranger stuff — the swarms of Sandmen and the like, the breaking down of the walls of reality, and the glimpses through the blueprint — are done so well. Credit also to Rex Lokus, the colorist, on that. I think there were also some really demanding color choices to render all of that. 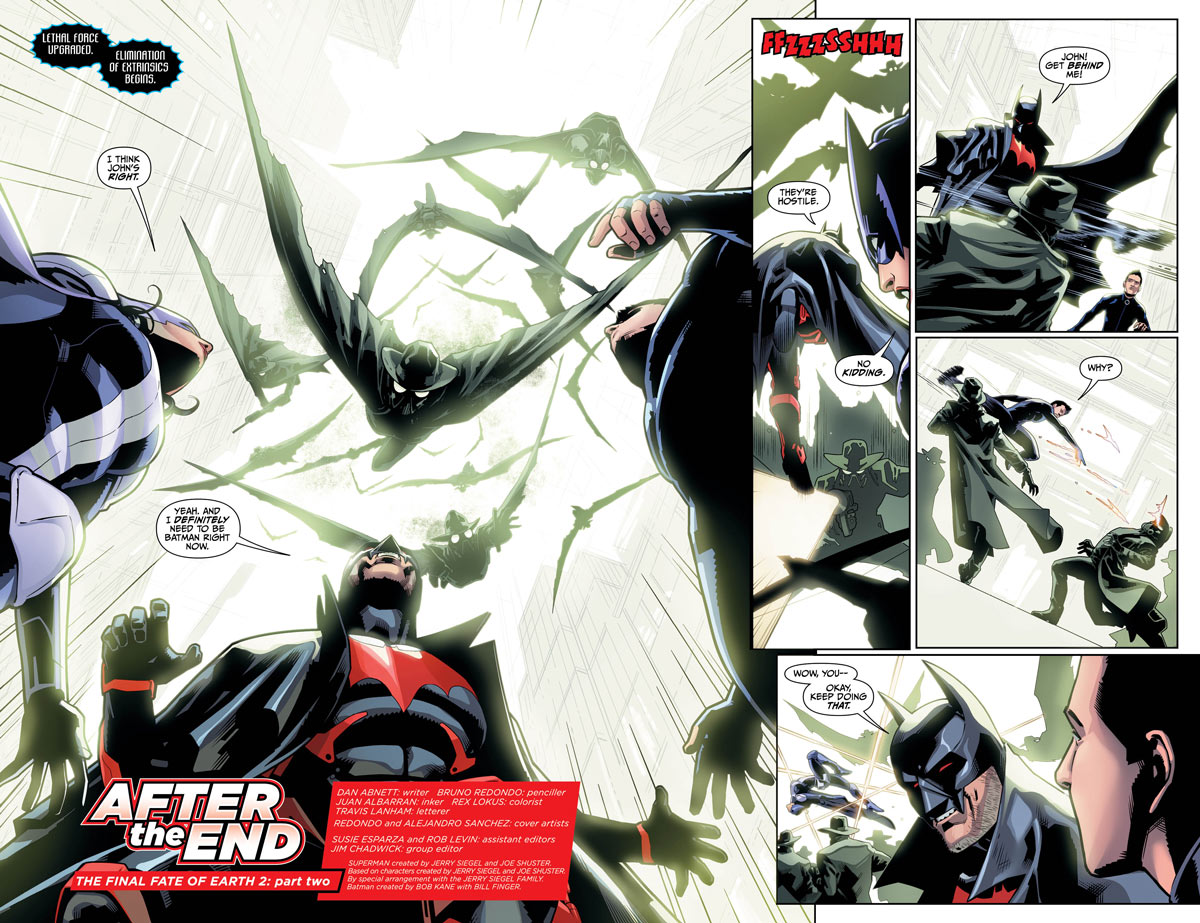 MSG: What I think I really responded to most going into issue #17 was really how you and Bruno worked together to reemphasize character relationships in the narrative. What relationships are you particularly interested in exploring further among the cast?

DA: If we consider these characters the Justice League of this world, or the Justice Society — although we don’t use either of those titles — there is a grand group dynamic of them as a team. They’re Wonders that are singularly going to look after the inhabitants of whatever planet they end up on. But within that, there are also obviously some very strong friends.

The friendship between Huntress and Power Girl, which we haven’t seen very much of yet, as well as the friendship between Power Girl, Hawkgirl, and Red Tornado, is important. The fact that Val Zod is Superman and he’s trying to hold them together. The fact that the Wonder Woman figure, Fury, is an outsider and in many respects, caused this thing to happen — and hates herself for it — means they have to rally her as well.

And there’s this curious little family dynamic of Batman, Huntress, and John, Dick Grayson’s long-lost son. He’ll potentially be performing the role of a boy wonder there, which I think is really sweet. Originally, the Dick Grayson storyline of his missing son had been dangling for such a long time that I thought it was important to resolve. The obvious thing would have been that he’d never find his son, but I believed it would be much more interesting if he did find his son and brought him back into the fold with Huntress’s help. 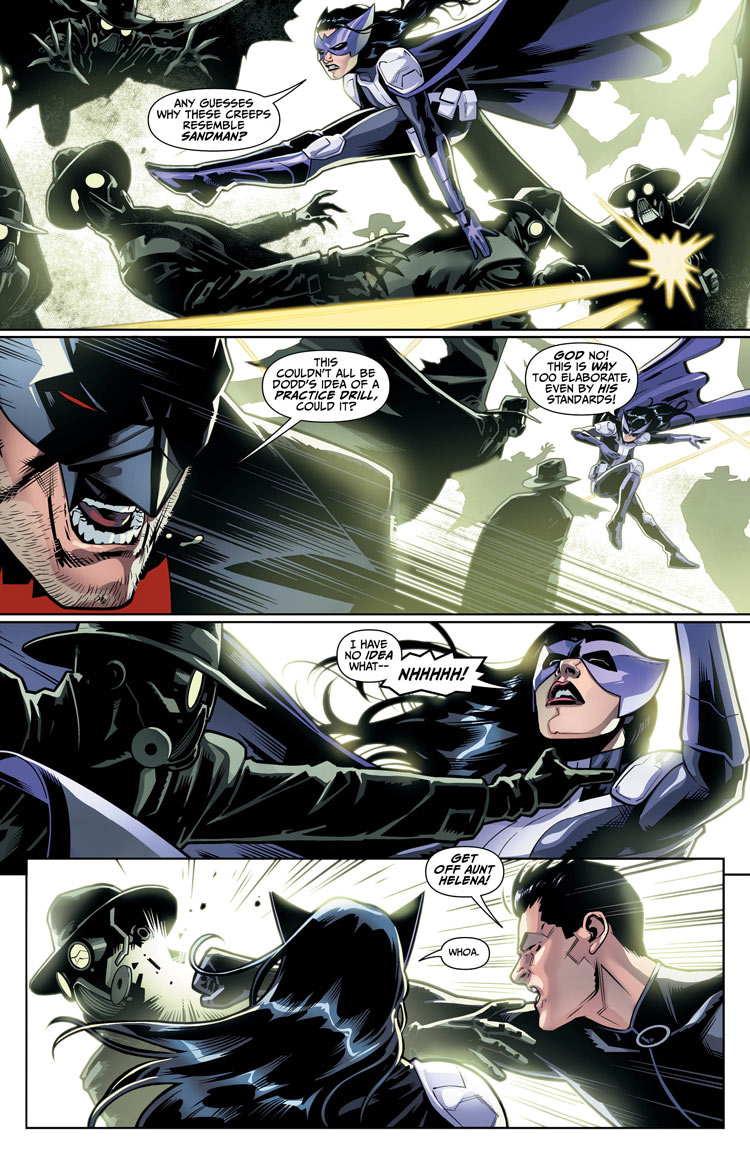 You now have this ready-made sidekick. In some respects, it’s great to have Batman, because Batman’s such a core DC character, but he’s a difficult character to handle. All the other Earth 2 characters are just so obviously a different person, but Dick Grayson is taking up the mantle here. I’ve done a lot of work over the last few issues, and in the annual as well, to define him in a way that’s much more credible and interesting. As someone who’s done this not necessarily because he’s suited to it, but because someone needs to fill this role.

If we’re going to have Batman, it needs to be a really interesting Batman with a lot going on. I like the idea that although he’s extremely capable, he’s not the best Batman ever. He knows that he’s not up to the standards of the ones that have come before him. But what he brings to the table is enormous courage.

Huntress, in that respect, is the natural successor to the previous Batmen. And having his son there to will be interesting, as well as how they each react to the main group.

Push comes to shove, though, this is a group of characters that will stand together without question. But along the way, there will be clashes and conflicts among them. I think that’s only to be expected, particularly given that they’re not going to forget what they’ve been through — this loss of their worlds and an enormous, endless saga of trauma that has brought them to this place. They are not going to give up. They’re all much more resolved than ever before. 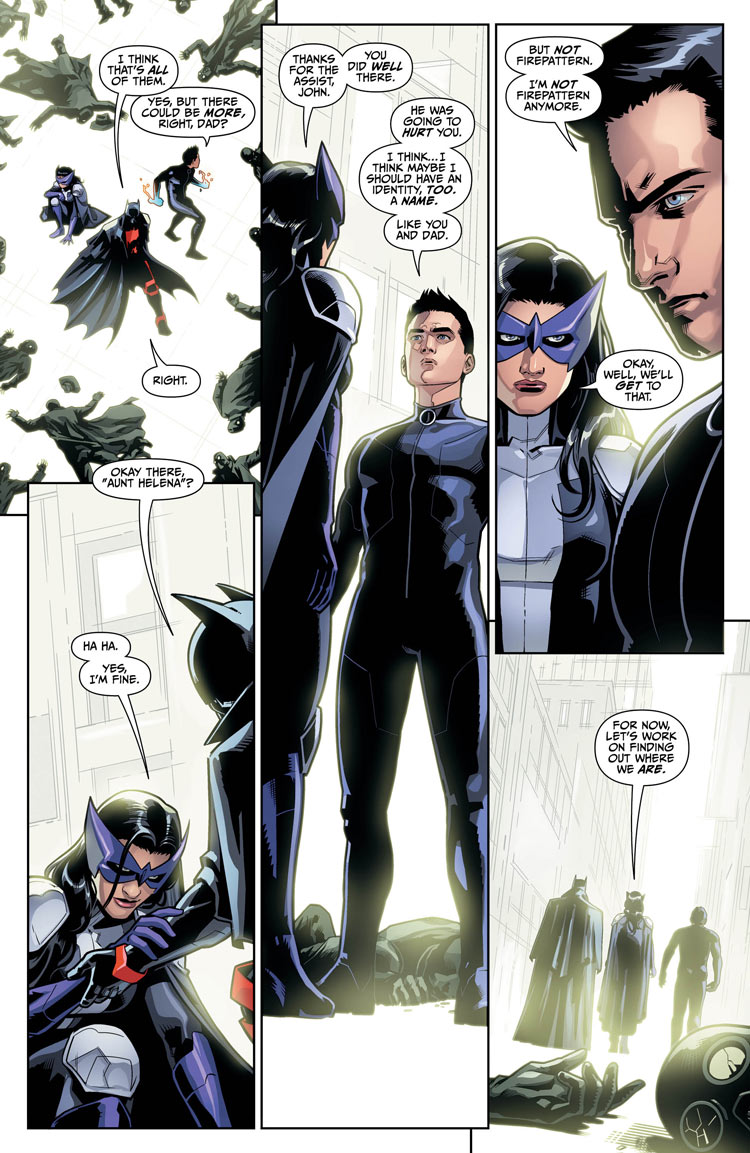 It’s fun! I really love some of these characters and have this chance to play with either variations on classic DC heroes or with heroes that just don’t exist anywhere else except on our beloved Earth 2.

MSG: Any final teases or spoilers for the upcoming months to get the fans excited for the series.

DA: Although I hope the current story is immensely satisfying in itself, where this story goes is sort of an unexpected direction. And while I said at the beginning of this conversation that I think the Earth 2 heroes have been through too much — that the volume of trauma has been turned up too loud — we will give them some sort of security and settlement. But that doesn’t mean it will be easy.

The next issue has an enormously, possibly shockingly dramatic moment in it. So, stay tuned. 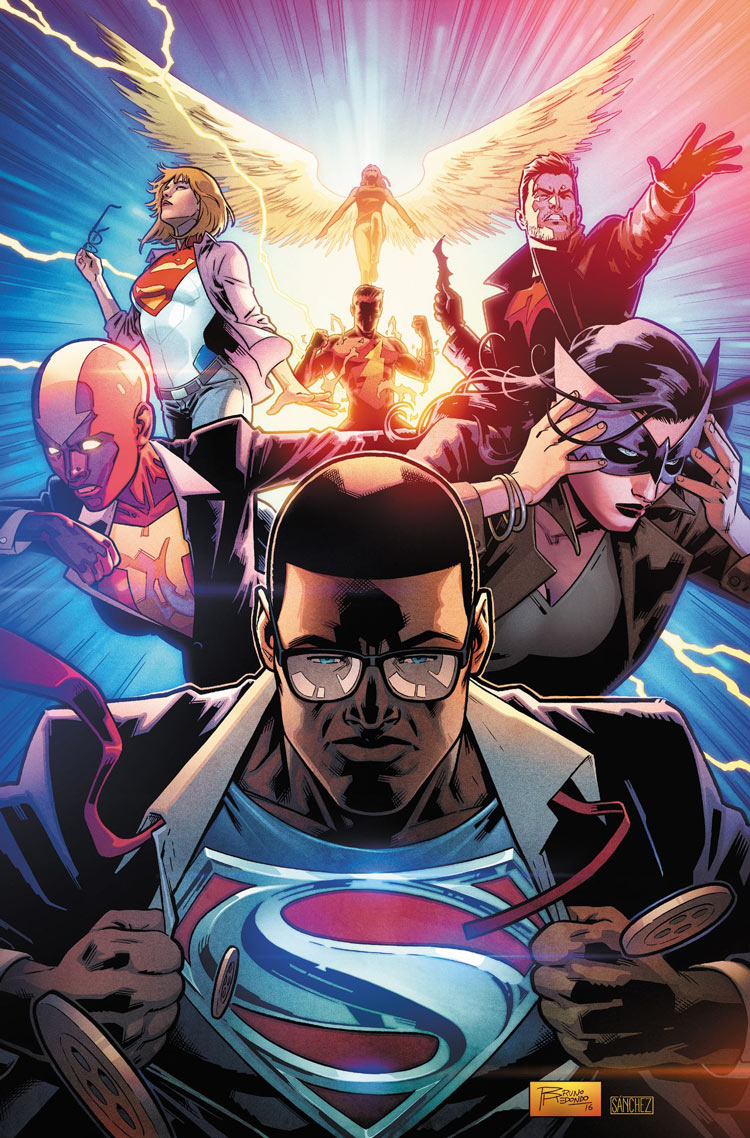 If you’ve followed Earth 2 this far, you’re going to want to stick with it to see where it ends up. But if you are new to Earth 2, in some respects this is the perfect place to join in. If nothing else, it is a huge saga. An entire DC Universe contained in one book is quite a rewarding thing to look at.

Part three of “The Final Fate of Earth 2” will appear in next month’s Earth 2: Society #19. Dan Abnett also writes Aquaman and Titans for DC Comics.