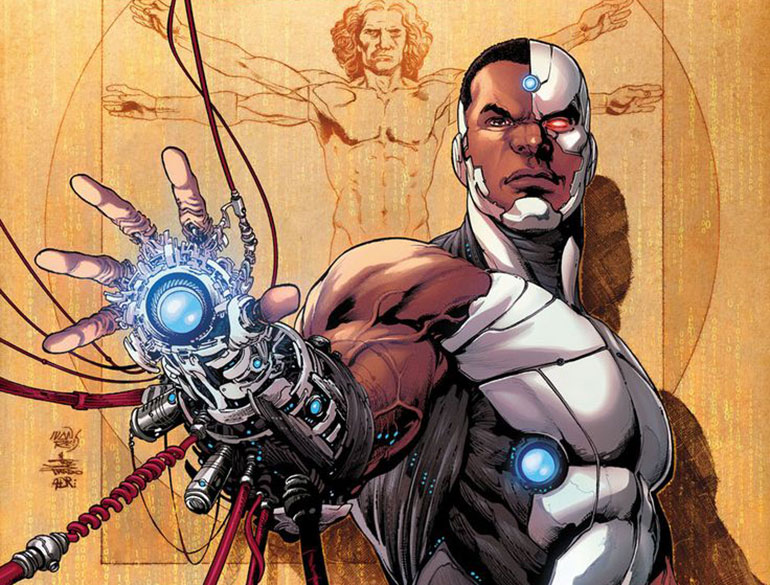 Cyborg may not be DC’s first African-American super-hero, but today he is certainly the most prominent. Introduced in 1980 by Marv Wolfman and George Perez with the New Teen Titans, Victor Stone is now one of DC Comics’ Big 7 Justice Leaguers and helming his own ongoing series for the very first time. Taking the writing reins is David F. Walker, who sat down with Comicosity to share a bit of his thoughts on the character, how Vic’s relationship to his body is evolving, and how he functions as an African-American character in 2015 amid a charged political climate. 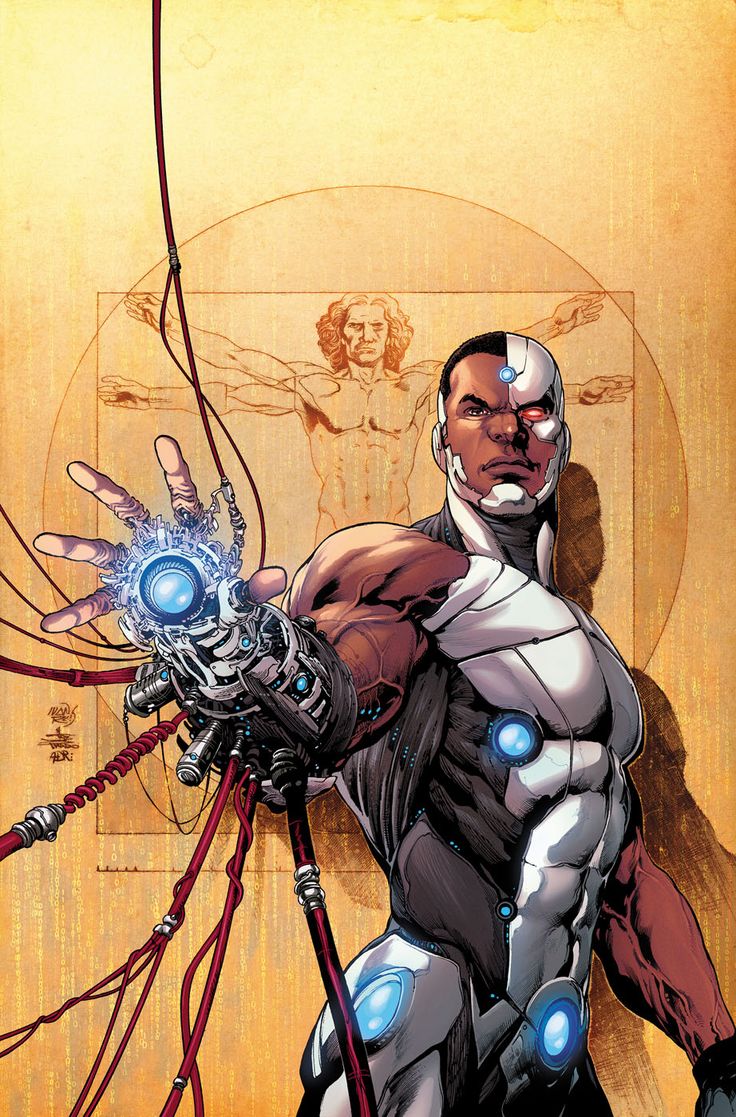 Matt Santori: With Cyborg being DC’s highest profile African-American hero and this being his first ongoing series, what does this moment mean to you as we move into Wednesday’s #1?

David F. Walker: It means that all eyes are on me and Vic Stone. It’s kind of surreal. But it’s also a good feeling.

I think the three African-American characters I think of most when I think of the DC Universe, it’s Black Lightning, Cyborg, and Static Shock (who, of course, is part of the Milestone Universe). Although, I am a big fan of Black Vulcan too from Super-Friends. You know, there’s this odd feeling because everyone asks the same question, which is, “What took so long?” Which of course, I can’t answer.

But it’s clear that I’ve been waiting for this comic since all the way back to 1980 when I first discovered him. I’ve been wanting Cyborg to have his own comic since the beginning of the New Teen Titans. So, for me, this is a bit like a childhood dream come true to be able to be part of this next stage in Vic’s development.

MSG: So, as a longtime fan, how do you feel Vic is different today — particularly in your take — than he was when he was first introduced?

DFW: The differences between the DC YOU version of Cyborg and the classic version? There’s tons of similarities. They’re very much the same character. He’s still very young in both iterations of the character. He was still 18 when the accident happened that turned him into Cyborg. And he’s still a team player.

It’s interesting because he’s one of those characters that just as easily could have been a villain, but he’s chosen to do good. And in both versions, he’s a character that’s never had an alter ego. So, he’s never had the opportunity of hiding behind a secret identity that so many other super-heroes have.

One of the things that interests me — and that I really want to explore — is his evolution as a character. I want to see how he grapples with the death of his mother, and the massive transformation he’s gone through. And the strained relationship with his father. All these things have been touched on throughout the course of his history, but I want to go deeper with it. I think that’s something that interests a lot of readers about this particular character. How is coping with this stuff? He’s 70% machine, but he’s still all human being. 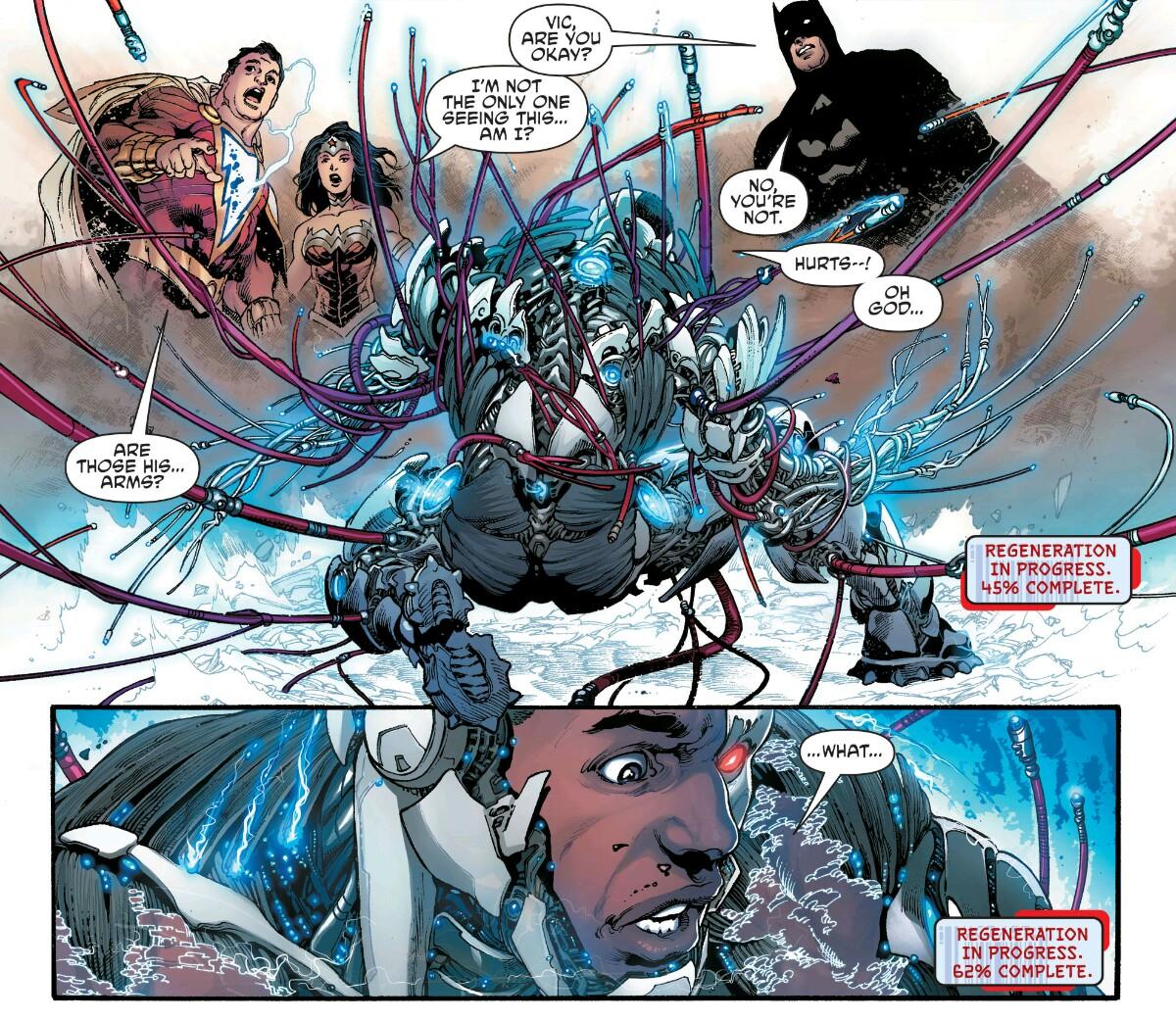 MSG: Right. Certainly the final splash page in the eight page preview shows us a Cyborg whose body is being reconstructed. How do you tackle this character emotionally that has an opportunity to rebuild his body from scratch?

DFW: The way I’m approaching it is not so much the opportunity to rebuild his own body — although that’s clearly part of what’s going on — but it’s also this aspect of your body going through changes you don’t understand and that you don’t necessarily have control over.

And this happens to a lot of us. I’m getting older and my knees don’t work the way they used to. They’re all creaky and there are days I wish I could unscrew my legs from the knee down. People get sick and tragedy occurs. Their lives are impacted in these tremendous ways and they just have to soldier on. And that’s what Vic has always done. 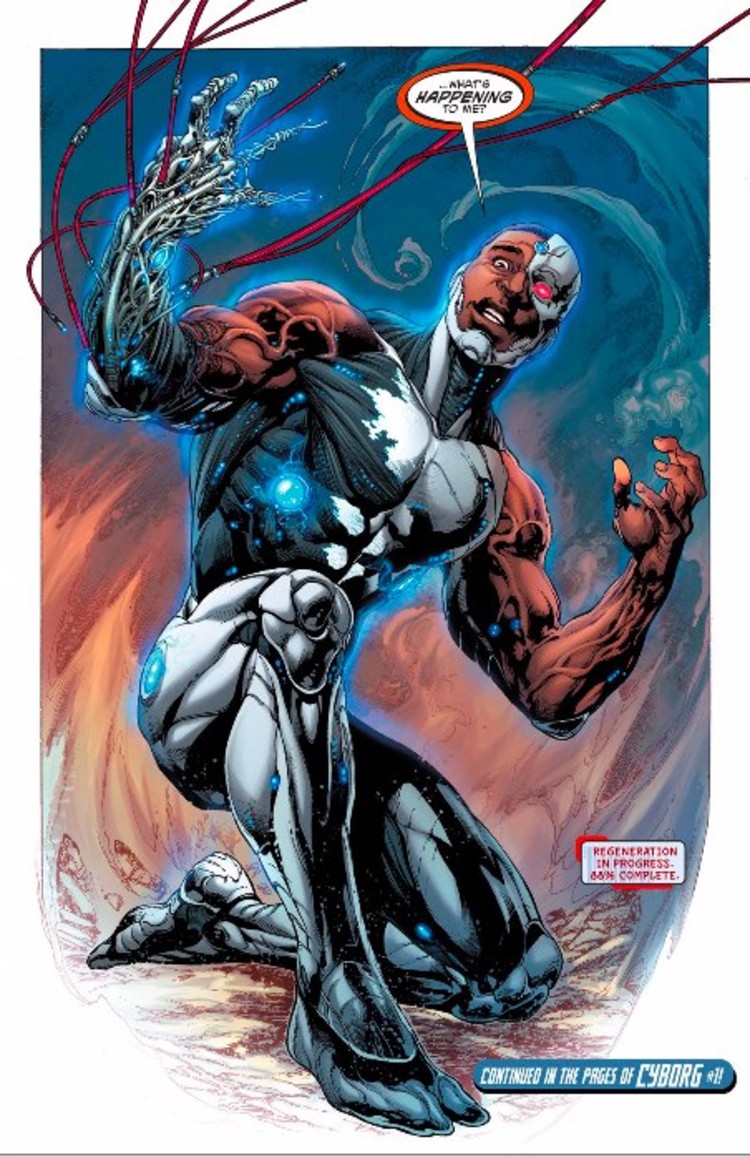 We’re seeing him at a particular juncture in his life where he’s really adjusted pretty well to everything that’s happened up until now, and settled into a state that’s normal for him. But this is going to change all that, because that’s what happens in life. And how does he adjust to that?

And more importantly, how does he adjust to the shifting ways that people perceive him? Because as much as he may complain that people think he’s just a machine, he’s grown comfortable with that. And that’s all about to change.

MSG: Well, up until now, most of those people have been his colleagues in the Justice League, but your supporting cast is evolving beyond that. Can you talk a little bit about the characters you’ll be bringing into the book?

DFW: Most of the cast I’m bringing in are familiar people that we’ve seen in one form or another. His father, Silas Stone, is going to be a huge part of this. Sarah Charles is also another really crucial character. Thomas Morrow. And a few others that aren’t super-heroes.

One of the things that I think makes a good super-hero story is seeing how they interact with the non-super-heroes in their lives. You see it in Batman the way he interacts with Alfred and Commissioner Gordon. You see it in Superman. You see it in so many books across the publishing spectrum. And that’s what I think is really needed for a character to have a solo title. You don’t have to have a strong supporting cast if a character is just a member of a team book. But the moment they go solo, there has to be characters that remind us, that in addition to all the amazing things a character can do, they still are grounded. They still have emotions and desires. 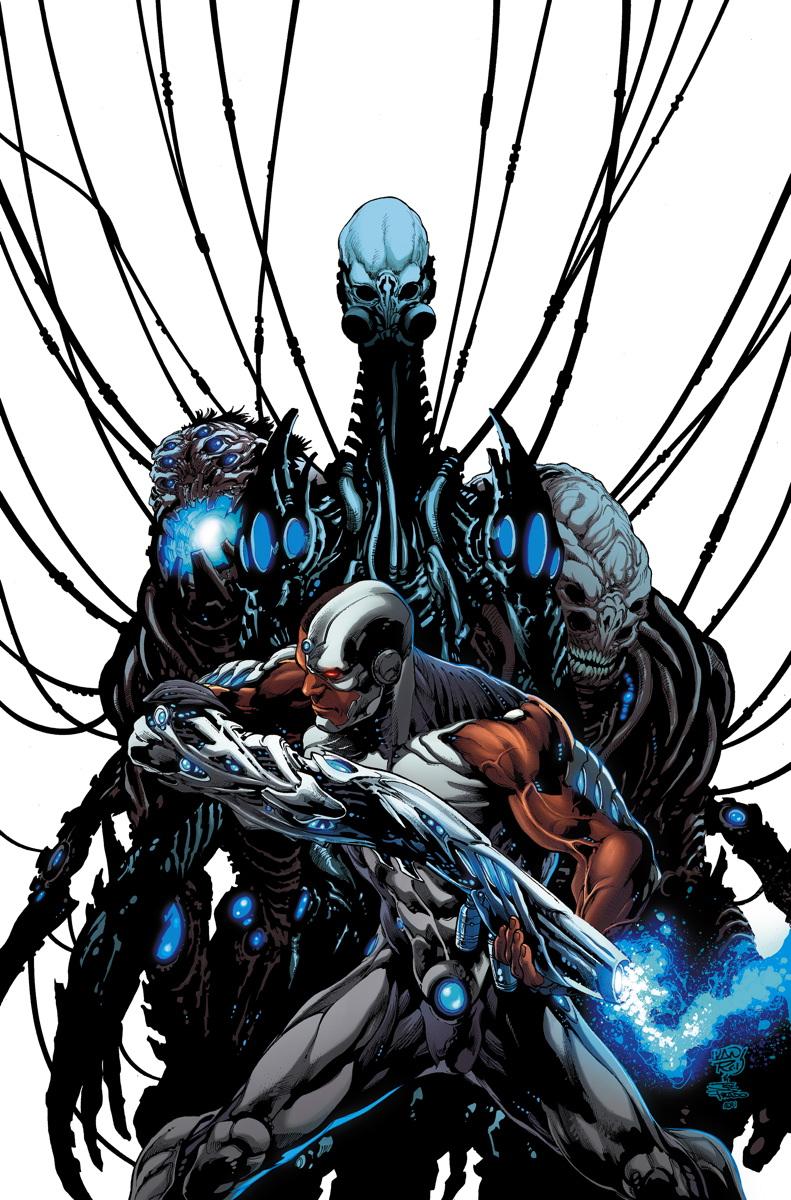 That’s what we’re going to see. The three biggest characters will be Silas Stone, Sarah Charles, and Doctor Morrow, but there will be new characters coming in too. Like Sebastian, who knew Victor in passing when they were both in high school. He’s going to be this buddy with whom Victor can go out with and hang out, watch TV or sports with, but who isn’t a super-hero at all. It’s very different than the relationship he has with Shazam in the Justice League, or going way back, to the relationship he had with Beast Boy in Teen Titans.

MSG: So, in the book, this is the world Victor is surrounding himself with, but there’s a greater world right now that you have mentioned reflecting: Ferguson, the shootings in South Carolina, and arsons of Black churches. How much does that impact how you’re looking at Cyborg and how he’s looking at the world around him?

DFW: As someone who tends to look at the news a lot, and keeps up with the world around him, I can’t help but ask myself what would happen if someone like Vic Stone — with all of these cybernetic attachments — were walking down the street in Charleston or Ferguson or McKinney, TX. We’ve seen how the police have responded to unarmed Black youth. What would happen to someone like Cyborg?

I think there’s a lot of readers who just feel frustration in their day-to-day lives and turn to comics as a form of escape. But they also turn to comics as a form of metaphor and myth that reflects the way that they live. And I think that a lot of readers of color aren’t getting some of that metaphor in their comics, something that speaks to them in their day-to-day experience.

So, what I’m hoping to do as we move forward past the first story arc is to address some of that, to show that you can still be a super-hero and be a victim of some of the injustices of world that are thrown at regular people. That you are not immune to it, just because you have super powers. 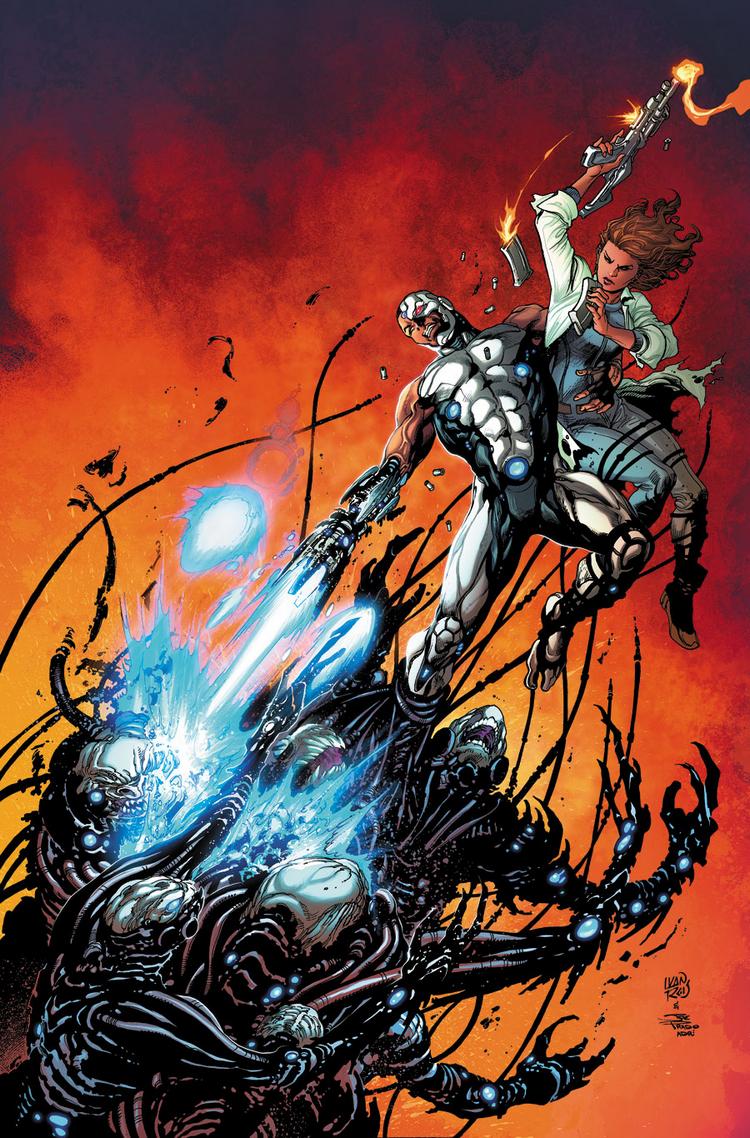 The continuing adventures of Victor Stone begin anew in this Wednesday’s Cyborg #1 from writer David F. Walker and penciller Ivan Reis, and DC Comics. For a free 8-page prologue story from David Walker and the rest of the creative team, visit Comixology now.