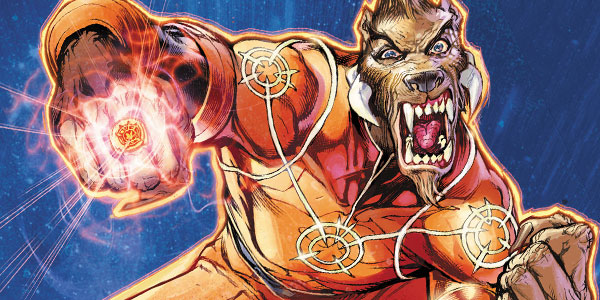 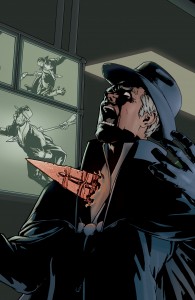 Few comic creators can claim to run the gamut of subjects the way writer J.M. DeMatteis has in his long career. From classic heroes like Captain America and the Justice League, metaphysical protagonists Man-Thing and Doctor Fate, to all-ages adventure with The Adventures of Augusta Wind, the creator has written it all — and he’s about to take on his strangest pairing yet. J.M. was kind enough to speak with us about his ongoing role in crafting the (after)life of the Phantom Stranger, and what it’s like to go home again with collaborator Keith Giffen on June’s upcoming new series from DC, Larfleeze!

Matt Santori: It’s so great to see your name gracing so many new projects at DC Comics, J.M.! What drew you back to scripting for Dan DiDio on Phantom Stranger and what is it about the character you find compelling?

J.M. DeMatteis: I believe it started with my old buddy Keith Giffen having a conversation with Dan about me.  Soon after, Phantom Stranger editor (and all-around great guy) Wil Moss emailed and asked if I’d like to work with Dan on PS.  I usually like to take a day or two to think these things over, but I’m such a huge fan or the supernatural corners of the DCU—and of the Stranger in particular—that I said yes instantly.

The Stranger has always intrigued me.  His air of mystery, that sense of knowing Cosmic Secrets the rest of us don’t, the Stranger’s ability to weave in and out of a variety of stories, touching lives all across the DCU.  Dan has remained true to the essence of the character and yet he’s woven a new mythos around that, a tale of redemption that I find irresistible.   Dan also came up with a brilliant angle when he introduced the Stranger’s family…and the mystery of Philip Stark. 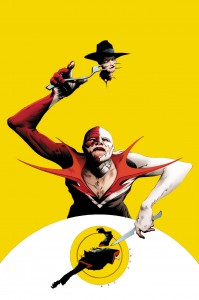 MSG: You have the opportunity with Phantom Stranger, as you did with Dr. Fate years ago, to investigate religious and metaphysical themes in the DC Universe from a first person perspective. Can you talk a little about the challenge of writing a character whose history is so intertwined with Christian tradition?

JMD: The metaphysical and the psychological have always been my doorways in to the various characters I’ve written over the years.  I want to know the why people are the way they are…why the universe is the way it is…where we all fit in the scheme of things.  The supernatural characters offer a unique perspective on those questions and the Stranger, with his roots in Christian tradition, taps directly into that.  That said, I don’t see this in any way as a “Christian book.”  We are, after all, dealing with the entire supernatural arena of the DC Universe, which encompasses many paths and traditions and points of view.  But having that backdrop allows us to ask the Big Questions in natural ways.

All that said, if the book was just about the metaphysical it wouldn’t work.  First and foremost, a good story has to be about a character and his journey.  The Stranger is a complex character, with levels and layers we’re just beginning to tap, and it’s his journey to redemption that holds the most fascination for me. 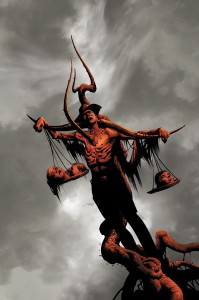 MSG: Phantom Stranger has featured a true who’s who of DC’s mystical characters, from the big guns like the Spectre and Justice League Dark, to the more obscure like Lady Luck. Who have been your favorites to write and can you tease any more guests coming on the horizon?

JMD: Dan has come up with a fantastic new character called Nightmare Nurse, who arrives in PS #8.  I intend to bring her back very quickly because she’s got so much potential and I want to learn more about who she is, where she came from, what her goals are.  That same issue introduces a new villain—the book’s main antagonist—called the Sin Eater that I think the readers will love.  In PS #9 (my first issue writing the book solo) the Stranger journeys to Hell and the story features the Demon as well as cameos from the Spectre and the Sons of Trigon.  And in issue #10, we get the first appearance of Zauriel in the New DCU.

As for favorites—I love the new characters I’ve mentioned because there’s so much room to play and explore.  But I’m a massive Kirby fan, so I’m delighted to have a chance to write the Demon, one of the classic Kirby characters.  I’d like to bring him back into the book before too long.

MSG: The title will soon be undergoing a name change to Trinity of Sin: Phantom Stranger as Pandora is launched in her own series. How are you working in collaboration, if you indeed are, with Geoff Johns, Ray Fawkes or others on the bigger picture leading toward Trinity War?

JMD: I don’t want to say much about Trinity War—beyond the fact that Geoff and company have crafted a wonderful story—because I don’t want to spoil any surprises.  I will say that there will be a Phantom Stranger cross-over with TW (in issue #11) and it won’t be one of those forced stories that interrupt the main flow of an ongoing title.  It will be integral to Trinity War and it will be a hugely important moment in the life of the Stranger. 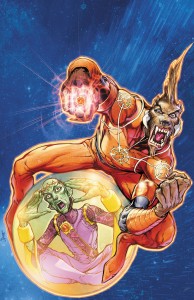 MSG: Shifting gears, with Larfleeze launching in June with co-writer Keith Giffen, there’s no question fans are expecting a bit of that old-fashioned magic you two brought so beautifully to Justice League International. How has your professional relationship grown over the years and what do you think each of you bring to the table now that you didn’t before?

JMD: During our original, five year Justice League run, we really weren’t thinking much about our collaboration, we were just working like madmen to please our editor (the great Andy Helfer) and get the books out on time.  (Remember, there was Justice League, Justice League Europe, Justice League Quarterly, annuals, spin-offs—an entire line of books.)  It wasn’t till years later, when we came back together for Formerly Known As The Justice League that we realized what an amazing partnership this is.  As Keith says, when we work together we do something that neither one of us can do alone.  We’ve come to appreciate that more and more and no matter what Keith and I have worked on—the various Justice League titles, Defenders, Metal Men, Hero Squared (which I think is the best thing Keith and I have ever done together so far), Booster Gold—it’s the creative chemistry between us that’s been the real fun.  Having done this for so long, we understand each other in an intuitive way.  At the same time, we talk more than we did back in the 80’s JL era, bouncing ideas around, planning future stories, discussing character arcs, etc.  But the real fun of what we do is the crazy creative freedom.  Keith and I may discuss a story and then he’ll go off and create a plot that’s bears no relation to what we’ve discussed. I’ll then take that story and, via the script, build on what Keith has done while writing in new plot elements, character bits, changing the story in unexpected ways.  We like to surprise each other.

I’ve said it before but it bears repeating:  Keith is brilliant, one of the single most creative human beings on the planet, and I’d work with him on just about anything.  If he called up and said, “Hey!  Let’s do a reboot of Herbie!”  I’d say yes without hesitation.

And, since folks are constantly asking, I’d like to add that we’re looking around for a new project to do with the amazing Kevin Maguire.  I hope that comes to pass sooner than later because Kevin has been such an essential part of our work for so long and his skill as an artist and storyteller has never been stronger than it is right now. 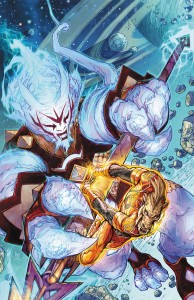 MSG: There’s been some perceived deficit of genuinely funny, outrageous books in the comic market as of late. What kind of hijinks can we expect Larfleeze to encounter (or generate) and how do you see his book fitting into the greater Green Lantern universe?

JMD: We’re taking Larfleeze off to the farthest edges of the DCU and our plan is to go full out Kirby Kosmic, while, of course, layering our brand of demented humor on top of that.  Keith and I have been talking for years about wanting to do a big cosmic book together and Larfleeze will allow us to do just that.  As for the rest of the DCU, our intention is to introduce new characters, not depend on pre-existing ones.  The overall goal, of course, is to have fun:  after all, it’s a book about an orange lunatic named Larfleeze.  You have to have a sense of humor when you approach this material.  We’re incredibly lucky to have Scott Kolins drawing the book.  His art is big and bold and energetic, his storytelling is clear and strong:  perfect for these stories.

MSG: Speaking of Green Lanterns, any chance of a G’nort reappearance in the New 52? He would seem like a perfect counterbalance to Larfleeze’s advanced OCD!

JMD: Despite what I just said about using primarily new characters, I have always been absolutely crazy about G’nort (which, I suppose, reflects some deep character flaw in me) and would jump at the chance to bring him into the Larfleeze book.  I wouldn’t be surprised if they were related in some way.  Maybe G’nort is Larfleeze’s 2nd Cousin, 15,000 times removed…?

JMD: There’s a new project coming up that I can’t talk about yet, but I’ll say that I’m incredibly excited about it.  (How’s that for being vague?)  IDW is bringing out a hardcover collected edition of The Adventures of Augusta Wind—the all ages series I just completed with Vassils Gogtzilas—in June.  Mike Ploog and I have a new project that we’re in the process of setting up.  I’ve got episodes of Cartoon Network’s new Teen Titans Go! series coming up soon.  And lots of other things I can’t talk about yet.

And I have to mention my Imagination 101 writing workshop:  the next one is in May, in Northampton, Mass. Go to my website—www.jmdematteis.com—for details.  Running these workshops has been a real joy.  It’s a full weekend of uncorked creativity as we explore writing for comics and animation.

Larfleeze #1 arrives in stores June 26, 2013 from DC Comics, co-written by J.M. DeMatteis and his frequent collaborator Keith Giffen. J.M. also currently co-writes DC’s Phantom Stranger and will be taking on the solo reigns with the renamed Trinity of Sin: Phantom Stranger #9, out in shops June 5, 2013.