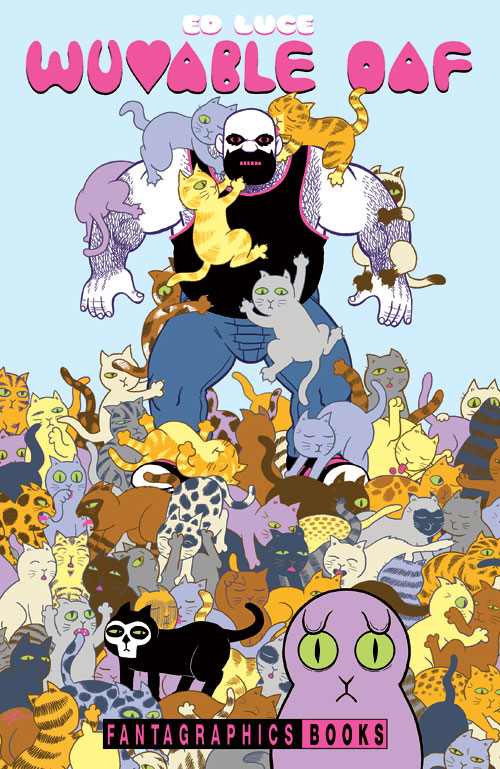 In the past year, one of my greatest comics discoveries was Wuvable Oaf, and along with it, its equally wuvable writer and artist Ed Luce. This April, Fantagraphics Books will release a hardcover collection of the first years of Wuvable Oaf, which have been described as “Like Sex and the City but with adorable, ex-wrestler hairy gay men.” This comic has it all – adorable kitties, a black metal/queercore/progressive disco grindcore band, and a search for true romance that is sure to make you laugh, cry, and help you celebrate your inner eccentricities.

Many, many thanks to Ed for taking the time to talk with me more about the book, which is available for pre-order now!

Sam Marx: You’ve been doing Wuvable Oaf for quite a while – how does it feel to revisit some of your older material for the Fantagraphics release?

Ed Luce: Yeah, this is our seventh year of publication! To be honest, revisiting the older work is a little petrifying. With the exception of some cartoons I drew for my college newspaper, these are the first proper comics I’ve ever made. I started them in my mid-30’s, after a decade plus career as a painter, so I like to think some of my technique arrived fully-formed. But really, I didn’t think I’d find such a broad audience for this early work. I’m still very proud of it… and how much I’ve grown as a writer since those first stories. There’s a definite progression and it’s especially evident in the back half of the Fantagraphics book, which is made up of shorter mini-comics.

SM: In your stories there are often experiences about bad dates, falling in love, and crazy metal fans. For new readers who might not know your work – how much of the comic is autobiographical?

EL: I like to describe the book as “exaggerated autobio.”  My real life just isn’t that interesting, but I think my perspective is. There are kernels of truth throughout, gleaned from my own personal dating experiences and those of my partner Mark and best friend Matt. Some things are observed, some overheard. Much of the cat stuff is me coming to terms with them… they’re these wild little creatures we let into our homes and lives. Lord knows what goes on in their tiny heads. I write their parts in the story as an attempt to explain my own cat’s behavior and motivations. Ultimately, my experience has taught me that she just thinks I’m another large uber-cat. So the kitties in the story treat Oaf accordingly.

Oaf’s basic personality is largely pulled from the nicer parts of my own, the boy my mom raised. I also describe him physically as me dosed with gamma radiation. Eiffel is more my real life stature, and his less endearing traits are pulled from my own dark side, my pettiness and jealousy. So when the two get together, they form this conceptual comic self-portrait.

EL: Character design. I love referencing other pre-existing comic characters, choosing a nose from here, picking a stylized eye from there. Any real student of comics could name my influences very easily. I base some characters on friends, so I get to kind of visit them in my mind, every time I draw them. Occasionally, I’ll give myself the task of making two male celebrities have a baby. Attila, from EJA©ULOID, is a fusion of Rob Corddry and Jason Alexander. If I’ve done my job right, I tend to have a little crush on the character for a while, which makes drawing them a whole lot more fun.

SM: Is there anything you really hope people take away from reading Wuvable Oaf for the first time? 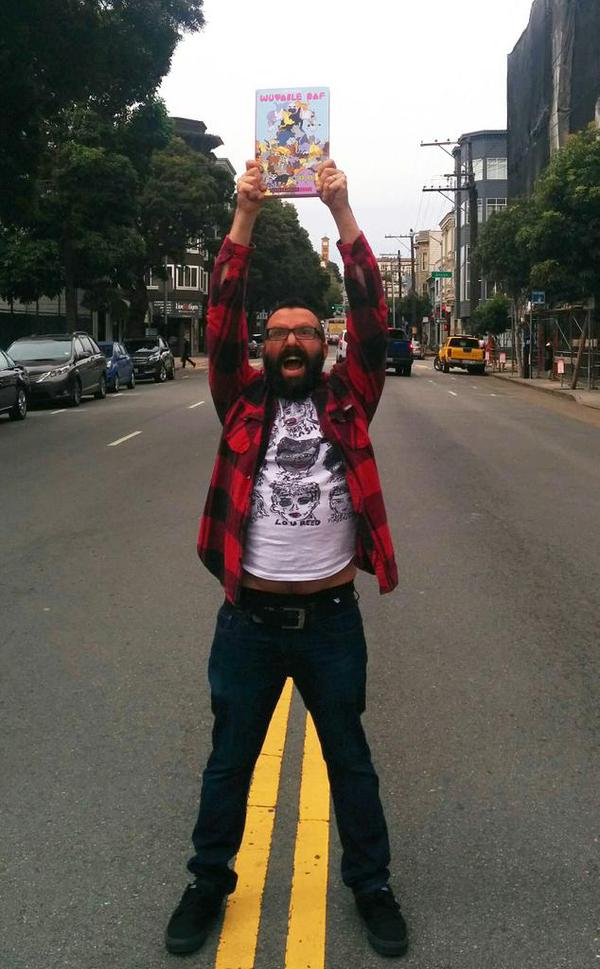 EL: I definitely hope people check out the book and discover that a comic from a queer perspective can be appreciated and enjoyed by anyone, regardless of gender, ethnicity or sexuality.

Beyond that, I never set out to have a message really, but I think what has emerged is this idea of accepting and loving yourself. Oaf starts out hating all his eccentricities, thinking he’ll never find anyone who will love him for who he’s become.  He feels like he doesn’t fit into all these molds he’s supposed to. When we meet him, he’s largely withdrawn from the social scene, especially bars and clubs. He just feels like a freak, so he cuts himself off from everyone but his closest friends.

After he meets Eiffel, each of his insecurities gets tested or brought under a spotlight and Eiffel ends up sticking around…at least ‘til the end of the date. So ultimately, Oaf ends up learning to embrace his inherent weirdness. I think people have really responded to that aspect of the story.

SM: What’s the best thing anyone ever told you about their reading of Wuvable Oaf?

EL: Oh hell…that is a tough one! I couldn’t pick one best. My audience has become so varied, I enjoy the different reactions each group has.

Very early on, the artist Skinner (who did the cover of the most recent Mastodon album and has been generally slaying the art world for years now) walked up to my booth and said, “I totally get what you’re doing and I think it’s great.”  He’d been following me for a while, pointing people in my direction. It was incredibly flattering.

Along those lines, I love it when straight heavy metal dudes come up to me and tell me they love the character. I often want to ask them specifically what they like (hmmmm…Sam)?  Is it the cats, the music references, the fact that Oaf ends up owning his big, hairy oafishness? Is the whole thing just a celebration of masculinity that they can vibe on? I mean, I know the place he came from and at first blush, I wouldn’t think he’d appeal to straight guys. But I’m glad he does. I think that breaks down some important barriers, especially during this challenging time where marriage equality and the basic civil rights of queer people are being questioned. It’s one thing to express one’s queerness with your art, to speak that truth…it’s another to actually get straight folks to understand and identify with it. I want Oaf to crossover that way….

I also like it when a parent comes up to me and tells me Oaf reminds them of their son.  I enjoy it when women let me know they think he’s really sexy. Those are my kind of ladies!

SM:If you could do the album art for any band, who would be it?

EL: Jeez…these are good questions!  I don’t think I could stylistically pull it off, but have always loved them, soooo… Slayer.  More realistically, I’d love to draw something for Bob Mould, who is a wuvable oaf in his own right. I got to do a comic about him for Noise Pop Fest, so that one’s kind of come true.

SM: What are a few songs or albums you hope people listen to while reading the new Wuvable Oaf collection?

EL: Why, the songs Needles (members of the Bay Area bands Limp Wrist and Talk Is Poison) already recorded for previous issues!  They cut three tracks as though they were the band in the comic, EJA©ULOID:  “Fearce,” “Sleep Apnea,” and “Oafanizer.”  They could also listen to the 7″ of Author & Punisher’s and Harassor’s covers of “Fearce,” which came with a special version of the OAFANTHOLOGY comic.

But really, there’s so much music that serves as a spiritual soundtrack to the book: The Pixies’ “Alec Eiffel” (where Eiffel came from), several Hidden Cameras’ singles (“Music Is My Boyfriend” is the unofficial title of the first Oaf story arc) and everything by The Smiths and Morrissey, but especially “Unlovable” and “The Boy With The Thorn In His Side.”  Those lines from “Thorn”: “And when you want to live, How do you start? Where do you go? Who do you know?”…that’s the start of my and Oaf’s journey, right there.

SM: Finally, what conventions will you be at this year where the masses can buy awesome stuff from you?

EL: Lord, where aren’t we going? We’ll be at ECCC March 27-29, with a signing stop over at Arcane Comics on March 26. Then WonderCon Anaheim April 3-5 and Portland’s Linework NW April 18-19. We’re doing the Queers & Comics Conference in NYC May 7-8, followed by a featured guest spot at TCAF May 9-10. More signings at Secret Headquarters in LA (May 22) and Floating World Comics in Portland (June 6). Then it’s off to the UK (for my birthday) and an appearance at Gosh London on June 13.  And we come home to Isotope Comics Lounge in San Francisco on June 20. Oh… and SDCC in July too!