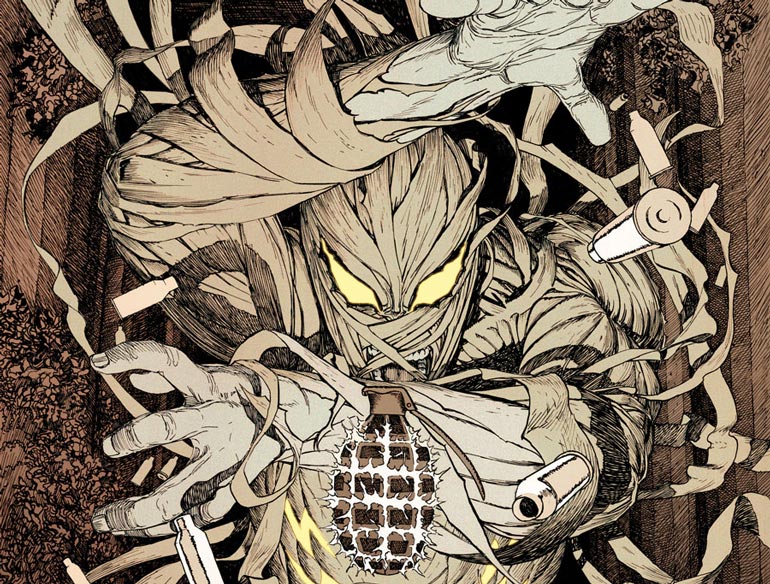 This October, DC Comics sets out to fright once again with a return of the classic character Ragman to their Rebirth Universe. Helmed by Gotham by Midnight writer Ray Fawkes and Catwoman artist Inaki Miranda, Ragman comes back to the Jewish hero and re-develops his origin for the new audience. The team sat down with Comicosity to reveal a few of those developments, and how PTSD comes to play in the series as a whole.

Ragman is perhaps one of Joe Kubert’s strongest legacies in terms of Jewish representation on the comics page, with more recent iterations tied explicitly to Jewish folklore. How much of that background are you retaining/expanding upon and what are your thoughts on visualizing that in the narrative?

Ray Fawkes: It was very important to us to retain that background, and the story is one that is connected to the concepts of the “ruah tum’ah” (or unclean spirits) from Jewish folklore — commonly presented in modern mythology as “Demons” that invade people who are suffering emotional or mental wounds and having “impure thoughts”, and the Dyubbuk – the marauding spirits of the dead. 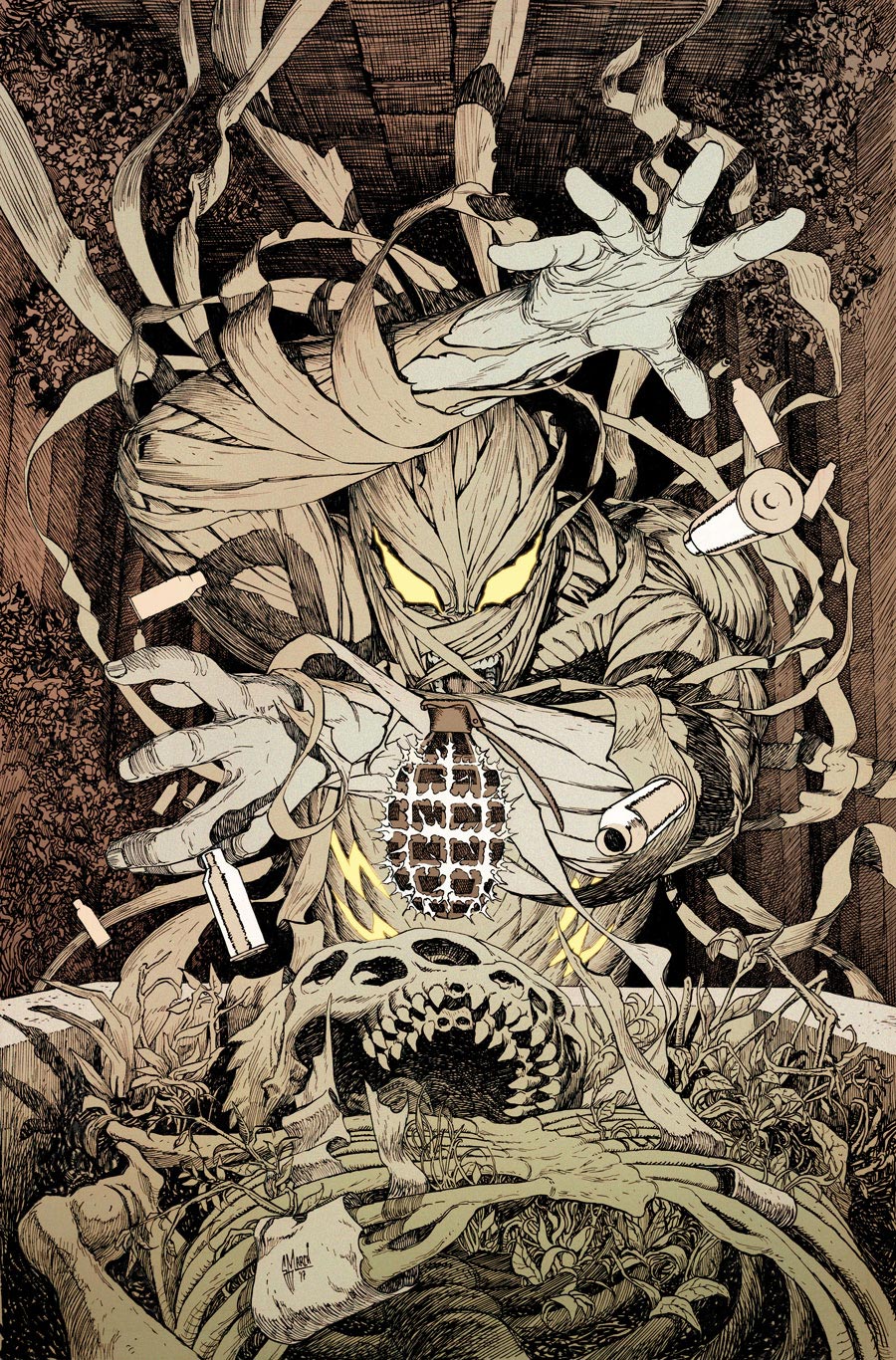 However, since Rory himself is less connected to his roots, he doesn’t quite understand them in those terms.

MS: We start out the series with your main character attached to a military regimen in the Israeli desert. What’s the geopolitical set-up behind that development and what is it adding to the narrative for you?

RF: The set-up behind that aspect of Ragman is less about politics and more about the personal: we wanted Rory to be suffering from the after-effects of war, and confronting the literal Demons that result from it.

His new origin as a hero is deeply rooted in the conflict in the desert, and the wounds he endured there. He is, like many of us, someone who just wants to be a good person and do what he thinks is right, and finds himself in world shaped by a bloody history.

Inaki Miranda: Yes, the book centers more in the immediate human experience of war, the consequences it has in a person’s mind. So that’s what I had in mind when drawing Rory. It was important to try to transmit his inner demons through his eyes and the way he moved. 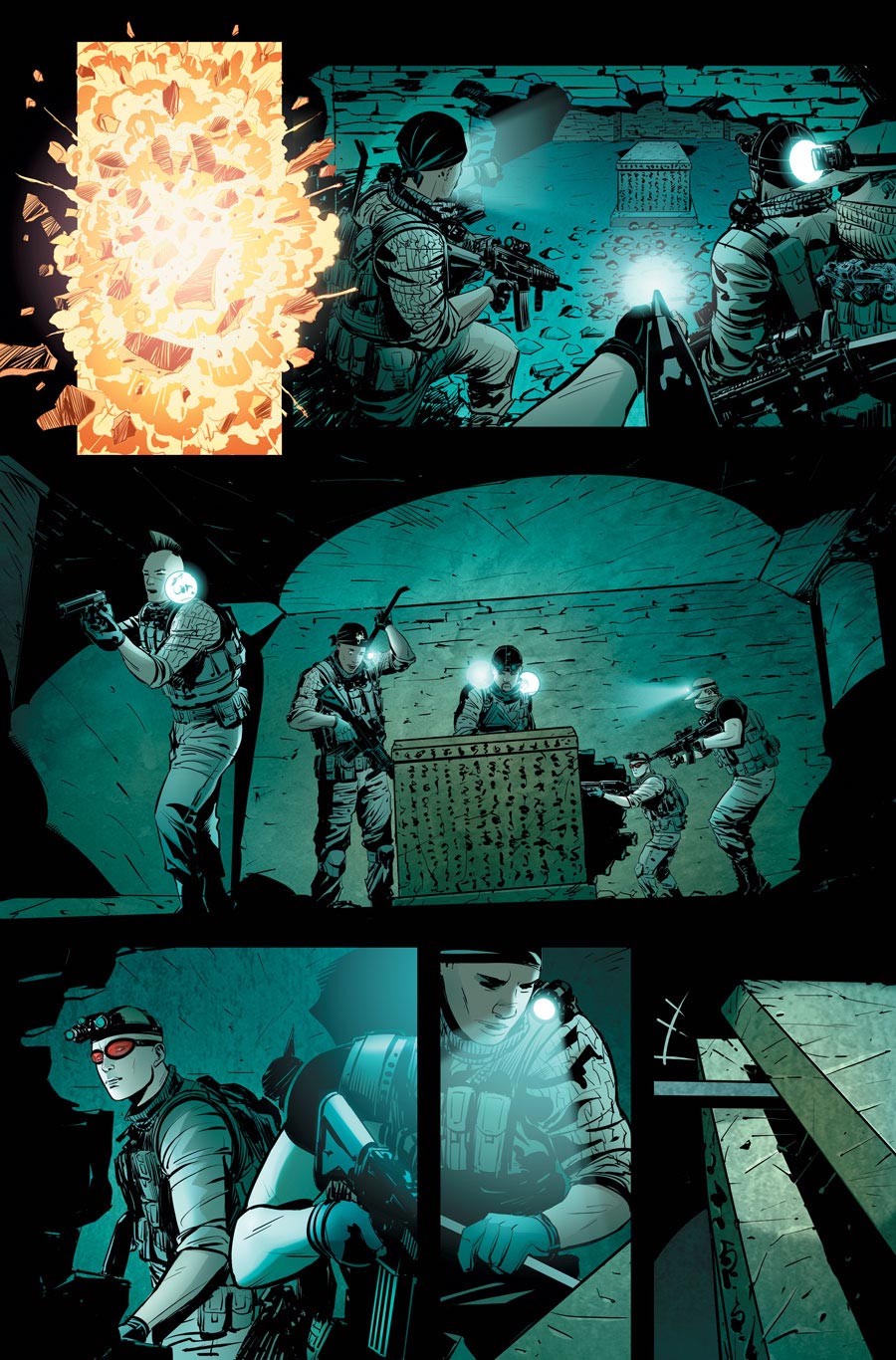 MS: In terms of origin stories, how do you decide as creators how much to keep and how much to change in terms of rebooting a character? Ragman seems to immediately have some distinct physical differences in this incarnation.

RF: It’s about boiling a character down to their essence and seeing if there’s another interesting way we can present it.

To me, the three things that form Ragman’s essence are: He is a defender of the downtrodden, he comes from their ranks himself, and he is inspired (or energized – in recent iterations literally) by the spirits of the fallen. I had discussions with Dan DiDio about how to rework and present a 21st century version of that essence while keeping true to the original spirit of the character.

The physical differences in this version of Rory really come from a wish to incorporate the beloved aspects of Ragman while allowing for some stylistic reinterpretation, so that it would be clear that this Ragman is a new version of the character. 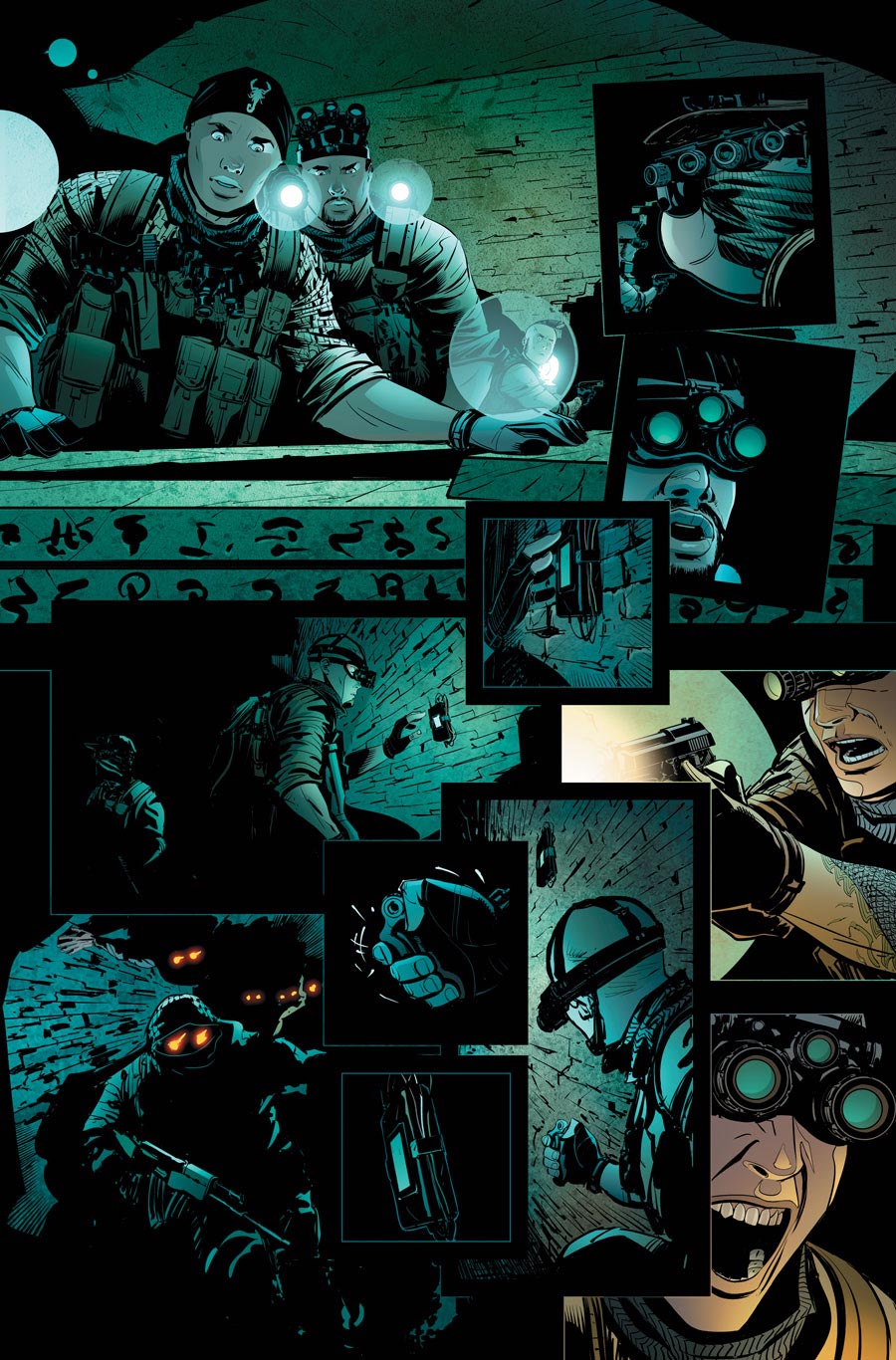 IM: Ray’s premise and script was my first real exposure to Ragman. Of course, I also researched about the original incarnation and its history, but Ray’s new representation is the one that totally hooked me and got me excited and eager to create something totally new, visually speaking.

Ray and I felt that this was our opportunity to treat the character as a top-tier DC superhero, one that could totally stand next to the other big guns at DC while having its own distinctive flavor, something new and fresh.

I was blessed with a whole lot of precious creative freedom from DC, so I went wild. The script already assured that the core of the character was safe, so my part was more intuitive and raw.

Ray’s premise was really asking for the new suit of souls to behave wilder and bolder, I thought that the full bandage-rags treatment was the best way to go. At the same time it was important that Ragman would not end up looking like the mummy, so I designed the rags to follow the structure of the human muscles, like an exo-skeleton.

Also, the suit has these cool energy spots, which not only make Ragman look cooler, but they add a functionality to his abilities. 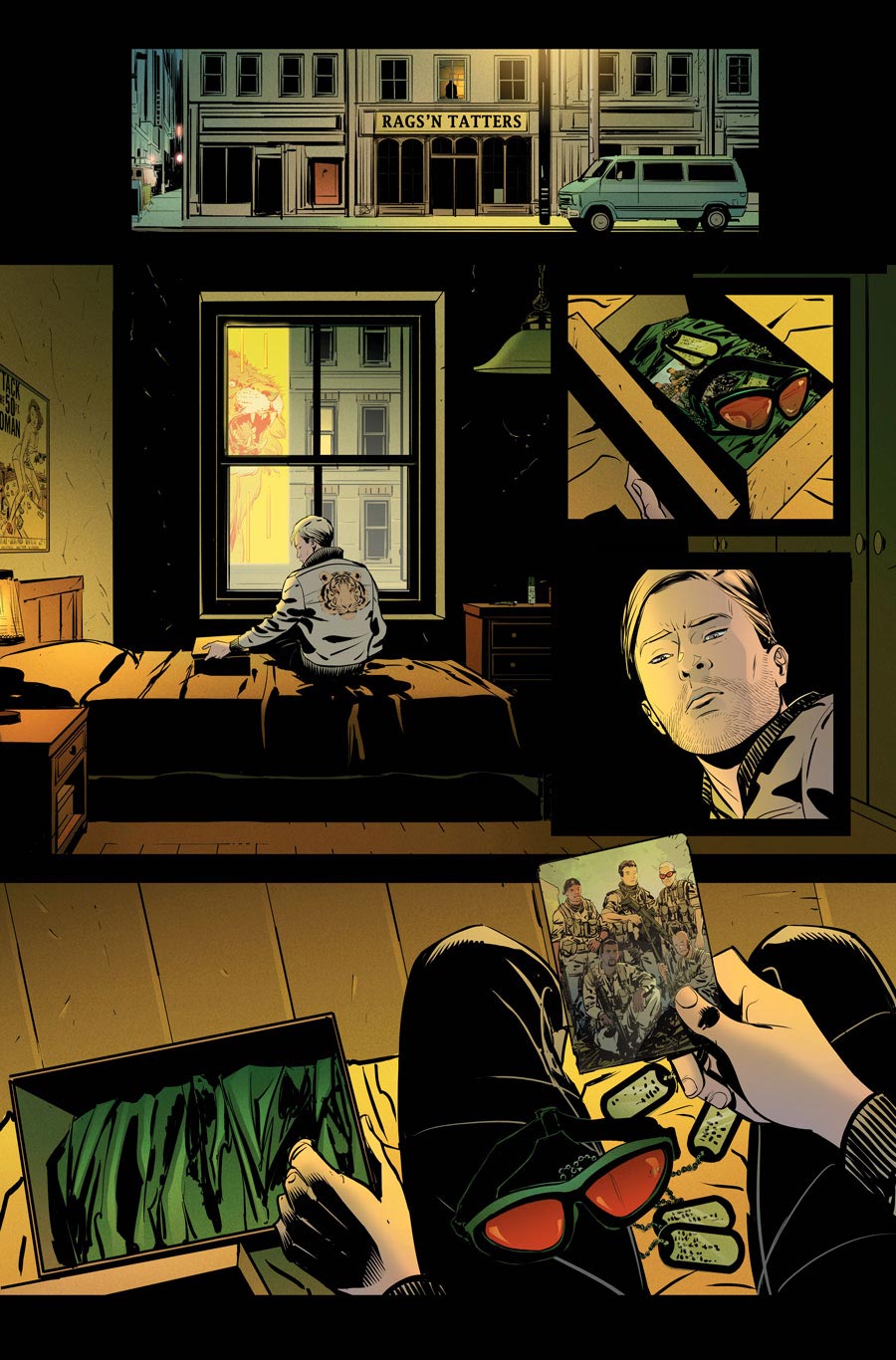 MS: Rory also seems to be dealing with some significant psychological issues right out of the gate. What kind of research went into portraying PTSD and how, as an artist, do you deliver on it physically?

RF: I did a lot of reading on PTSD, viewed testimonials of a number of soldiers, emergency responders, and survivors of war, and made sure to incorporate my research into Rory’s behaviour and language. The PTSD Rory suffers is crucial to this book. Honestly, this story is all about trauma and the often unacknowledged heroism of those who help each other through it.

IM: What I found really interesting about this, is how the PTSD symptoms intertwine with the supernatural demons that haunt Rory, to the point where it can feel symbolic. I love the oppressive atmosphere that this book exhales, in its core it’s really about a human being trying to overcome grief, while also trying to keep his integrity and do the right thing.

The quiet scenes feel like an exploration on the uneasiness within Rory’s soul; my goal in the art part was to make the reader feel how absorbed Rory’s mind is by this grief and disturbance, so that when you see him as Ragman you are still able to feel the human behind the rags… even though in the outside it’s all rage and fury and rags that behave like screams in the night.

MS: The relationship between Rory and his father has always been an important one in Ragman’s history. Tell me about your take on that, and how it impacts the development of the series for you.

RF: Rory’s relationship with his father is critical in this book. I see Rory’s father as a powerful grounding influence, and his compassionate nature in this story helps to understand where Rory’s deep beliefs come from — and what flavour his natural youthful rebellion might have taken on.

However, since we’re changing up the Ragman origin, this version of Rory’s father is not a former Ragman. His heroism is much quieter. 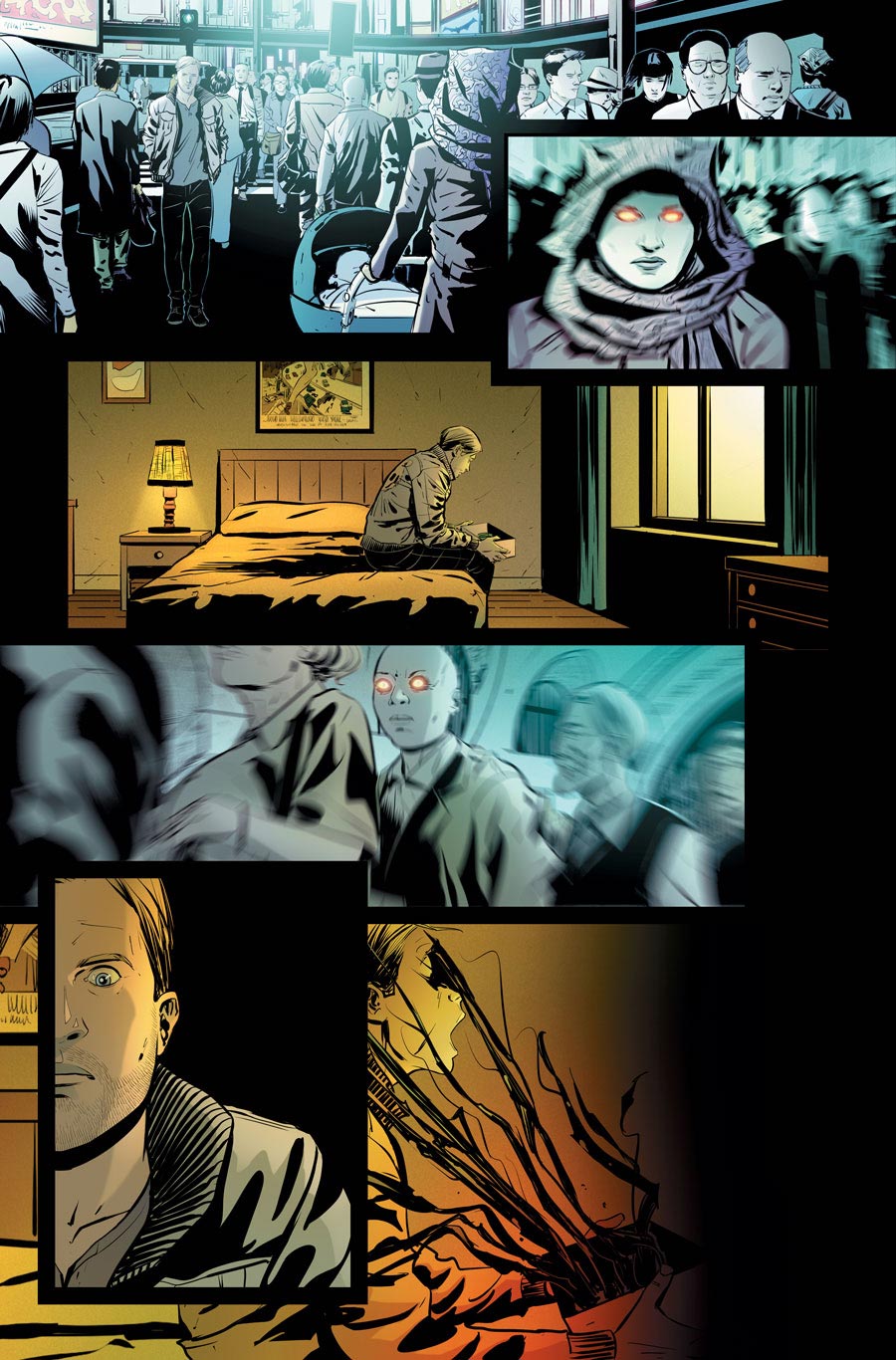 IM: I thought the father and son scene at the Rags’nTatters shop turned out incredibly warm and full of love. It might be one of my favorite scenes from the book. It says so much about how Rory’s soul was shaped.

MS: Ray, what special element is Inaki bringing to the book that surprised or delighted you?

RF: I asked Inaki to bring a sense of energy and freewheeling power to Ragman and his foes, and he delivered 200% — often surprising me with some really imaginative layouts and expressive character moments that I totally adored. I loved getting the pages for this book as they came in.

MS: Inaki, how about your thoughts on Ray’s work?

IM: Delighted is totally the word, yes. I told Ray this already… Ray’s writing made me feel like I was doing a Shyamalan film — say The Sixth Sense or Unbreakable. There’s this fantastic element of silent grief that makes you feel uneasy and feel for the characters.

Ray also cares so much about the visuals, leaving enough room to fuel my inspiration, that I felt like a little kid while reading each page and imagining how to shape the scene. I think the final product has two levels, the profound human, serious side, and the kick-ass wild fun when Ragman is fighting the demons. And that was all right there in the script. 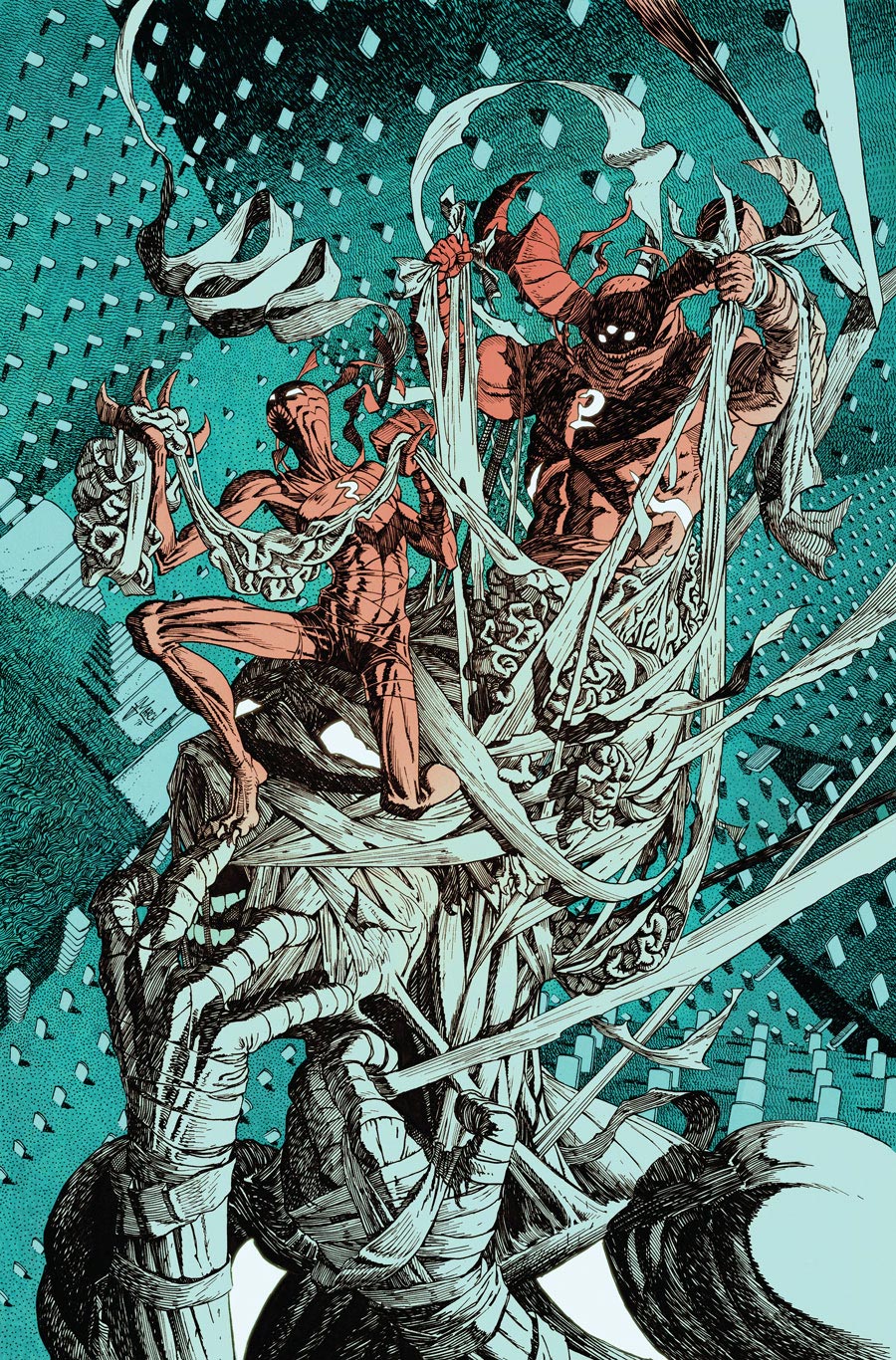 MS: Any final thoughts or special teases about Ragman for the Comicosity audience?

RF: DC readers know how much affinity I have for the supernatural characters in the DC Universe, so look for some awesome cameos and — maybe surprising — supporting cast members in this book. There’s a lot of dark, mystic fun on its way in these pages!

IM: I’m just very happy with what we have come up with; we put a lot of love in each page and into the character. I’m extremely thankful to DC for giving me this opportunity.

Final order cut-off for Ragman #1 from DC Comics is Monday, so call your shop now!