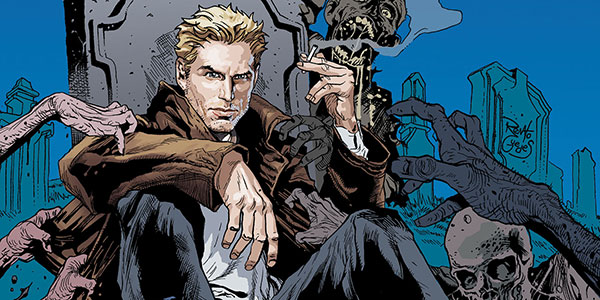 Writer/artist Ray Fawkes has quickly become one of the most prolific new creators to join the ranks of DC Comics’ New 52, co-writing Justice League Dark with Jeff Lemire, and now launching an ongoing series starring one of its most popular lead characters, Constantine! Fawkes generously took time out of his busy schedule to answer some questions about the man once known as Hellblazer, as well as his post-“Death of the Family” arc on Batgirl! 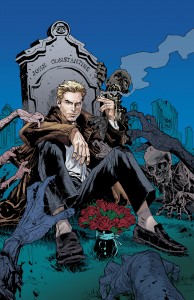 Matt Santori: Congratulations on the new series, Ray, and on your continuing role as co-writer of Justice League Dark! What makes John Constantine a character you wanted to focus on specifically in a solo title, of all the members of the team?

Ray Fawkes: Thanks! Well, aside from his wit and charm, John is also by far the most deceptive member of the team — the one who’s most likely to be engaging in some serious activities on the side while working to keep them totally hidden from the others. He’s the only one I can think of who could be running around the world, doing battle with a whole other class of threats, and step into a meeting with the Justice League Dark and act like nothing’s going on. This, I think, makes the idea of a solo series about him very interesting. What might he be up to that he doesn’t want anyone else involved in? What is he cutting his allies out of? What is he protecting them from? And what is the man with enough talent and skill to run a con on almost anybody – villain or hero – in the DC Universe ultimately trying to achieve?

MSG:  Constantine’s place in the previous DC Universe was relatively underplayed since Alan Moore’s run on Swamp Thing. What do you think John brings to a universe dominated by flashy super-heroes and villains that is unique or fascinating?

RF: He is possibly the trickiest and most ruthless operator arguably on the side of good in the DC Universe. He’s willing to play a very dangerous game, and he’ll play it wherever and with whoever he needs to, depending on the situation. He’s not just a guy dropped into the world where all these powerful figures are scrapping it out around him and he’s throwing his arms up over his head, just looking to survive. He’s made a real decision to become a mover and shaker in this world, and will steal the ears off of Batman’s cowl or the watch off of Luthor’s wrist to achieve his ends, if necessary. I think it’s safe to say that nobody else operates quite the way he does, or gets into the same kind of trouble…

MSG:  What kinds of threats can we anticipate Constantine facing? Is there a difference in your mind between the types of situations he’d handle solo as opposed to with his Justice League colleagues?

RF: Most of the threats John will face are related to magic in some way, but that has a lot to do with the fact that John’s earned the attention, admiration, or ire of almost every other mystical operator in the DC Universe. They know he’s some kind of mage, and they know he has a habit of taking down rivals who, by all rights, should be considered far beyond his reach. In the magic corner of the DC Universe, anything that isn’t understood is a threat. Almost nobody understands John – so almost everybody wants him neutralized. 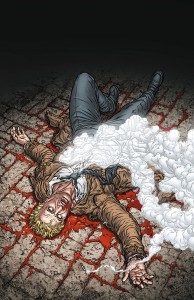 The problems he handles solo have to do with a very personal mission John is on, though, and he will be forced to step into some less mystical super-characters territory to get the job done. The details of that mission are something I’d rather not give away just yet. The real story behind John’s troublemaking ways is revealed in the pages of Constantine, and part of the fun of the book is figuring him out bit by bit.

MSG:  Can you share some of your process in working collaboratively with Jeff Lemire on the two titles? Are you writing together in similar fashion on both series or handling the chores differently on each, so to speak?

RF: We work quite differently on the two books. Our process on Justice League Dark is very synergistic – we sit down together to come up with a detailed plot, and then we split the scripts by scenes, write them, and bat them back and forth between us, talking it through all along, until we’ve put together an integrated whole that we’re both happy with. On Constantine, the two of us discuss the plot, and then I go and write the scripts.

MSG:  Series artist Renato Guedes has mostly been known to date for large super-hero action, such as on DC’s Superman title. How has the interaction with Renato been and what do you see him bringing to such a different archetype as Constantine?

RF: The interactions with Renato have been a dream. He’s worked in a number of different styles in the past, and he’s bringing a fantastically expressive, moody, shadowy look to this book. I think readers will be entranced with the work he’s doing – I know I am. 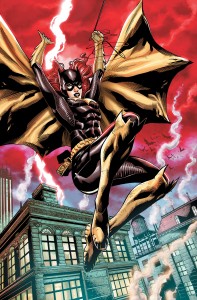 MSG:  Shifting gears, can you tell me a little bit about your upcoming two-issue arc on Batgirl?

RF: My two-issue arc takes place immediately after the events of the “Death of the Family” crossover, and Batgirl’s dealing with part of the fallout from that story in it – both physically and emotionally. She’s also going to meet up with a new enemy for the first time, and find herself playing cat and mouse with one of her oldest ones along the way. This is a very busy time for her.

MSG:  Barbara Gordon has a long history in the DC Universe, but is much younger and less experienced at this point in her narrative. What do you feel is her defining characteristic and how did it inform your story?

RF: To me, Barbara is unstoppable. I mean, think about it: she is one of only a handful of people in the world who has survived not one, but two horribly traumatic encounters with the Joker in her lifetime, not to mention countless lesser villains. Most people don’t last five minutes against someone like him – and here’s this young hero who, by all rights, must be one of the toughest people in Gotham, mentally, spiritually, and physically speaking. As I see her, she is a compassionate, driven, brilliant warrior who will never back down, no matter what. That’s what defines her, in my mind, and my story is about that aspect of her character.

MSG:  Any last words or special teases you can share with the Comicosity audience about your upcoming work?

RF: Only that I promise both Constantine and Justice League Dark are set to deliver some really wild stories – perhaps as shocking as they are enjoyable – and we’re going to blow the mystic corners of the DC Universe wide open. I hope readers join us for the ride.

Ray Fawkes co-writes Justice League Dark monthly with Jeff Lemire and is launching Constantine for DC’s New 52, with the first issue hitting stands on March 13, 2013. His two-issue story in Batgirl #17 and 18 begins that same day.

Fawkes is also the creator of Eisner-award nominated book One Soul, about which he spoke to Comicosity just a few months ago.