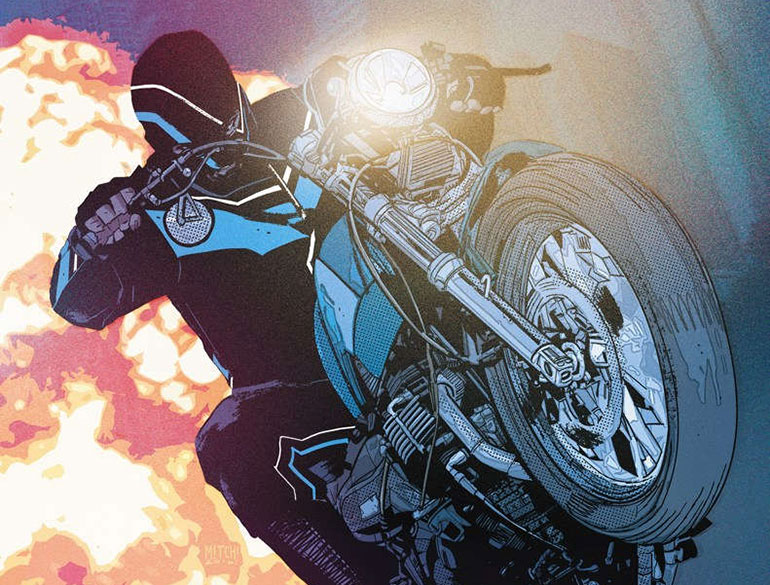 A brand new legacy hero is hitting DC this week and he’s a new take on a controversial character much more aligned to our times. Like Adrian Chase was to the 1980s crime-ridden New York City, we now have Donny Fairchild — the Vigilante for the Southland in Los Angeles. And taking the reins of Donny’s introduction is crime novelist and comic book writer Gary Phillips, who sat down with Comicosity to talk about his new character, the importance of the setting in the Southland, and how he sees a direct line from the gunslinging myths of the Wild West to the streets of Los Angeles today. 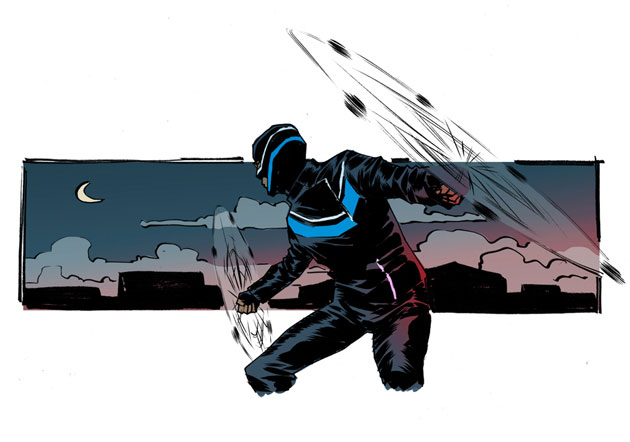 Matt Santori: Congratulations on the new book, Gary! I want to start off with your process of developing your main character Donny’s background.

Gary Phillips: The process was external, all the way in. That is to say, what first developed was a discussion Dan DiDio and I had about setting a book in the Southland of Los Angeles. I’m a crime and mystery book writer mostly, and most of my novels — and a fair amount of my short stories — have been set in and around this area where I grew up. It’s a very multi-faceted area.

With that in mind, I went inward to ask, “Who would be that character or person that could be set in motion across this particular landscape?” That’s how we get to Donny Fairchild, who’s this young Black man in his 20s, kind of a get-along guy. It was important to me in the sense of the character arc that, as we know, our heroes never start out being heroes. They never start out wholly formed. There’s a process along the way that develops them into the person or persona that they become. 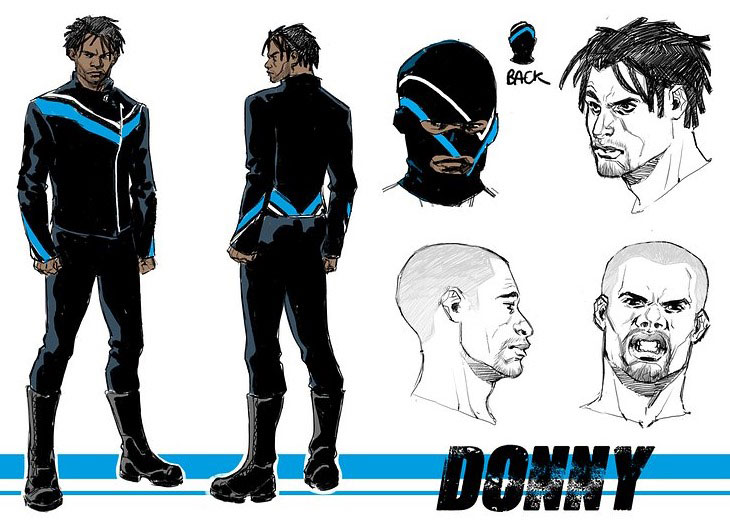 So, that’s what I wanted to get across when we first meet Donny. You know, life is good for Donny. He’s a failed NBA prospect, but he played a couple of years in the European league. He’s got this low-level, blue collar gig at the largest private college in Los Angeles, but he’s got a great girlfriend and his medical marijuana card. He B-balls with his buddies. What more could you ask? Nothing could be better!

But, of course, it all gets turned upside down when his girlfriend gets murdered early on in the first issue. He’s propelled into an arena that he had no knowledge of — and frankly, would have had nothing to do with — except that now he’s motivated to do something because of the death of this woman he loved. What can he do? Does he turn his back on it or does he try to rise and do the right thing?

This being comics, of course he’s going to rise and do the right thing — though somewhat reluctantly.

And I might add, there’s a big learning curve for him. What we’re going to see over the course of the six issues isn’t just that he’s going to put on a costume. Mike Delgado, one of his allies, mentions this early on: Just because you put on a costume doesn’t make you Batman. In fact, there’s a whole process and arc to go through to become Vigilante at the other end. 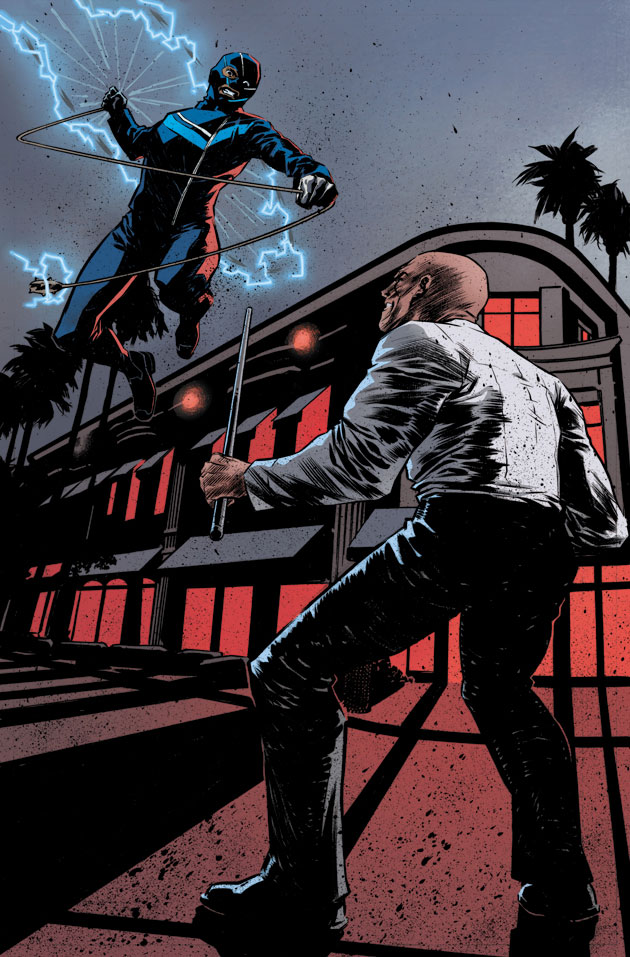 MSG: Interestingly enough, we see early on that Donny is more or less taking up his girlfriend Dorrie’s cause, not just avenging her, but following in her footsteps. Can you share a bit how you developed her and the set-up of the Vigilante?

GP: Hmmm. You know, in a novel, I would have devoted more real estate to who Dorrie was. There would have been a lot more sense of how she came to be, her upbringing. Really, here, we get to know Dorrie through her mother, Nina Smallwood, who’s there throughout the series as well.

But, as you know, often comics is about getting into the meat of the story the sooner the better. One of the drags on the idea of the origin story is how much narrative real estate it takes up, but you know, it can also feel a little slow. We just wanted to do what we could to jumpstart that, and get us in a little quicker. That’s why we have that bit of flash forward at the beginning, and then flashback to how we got there. 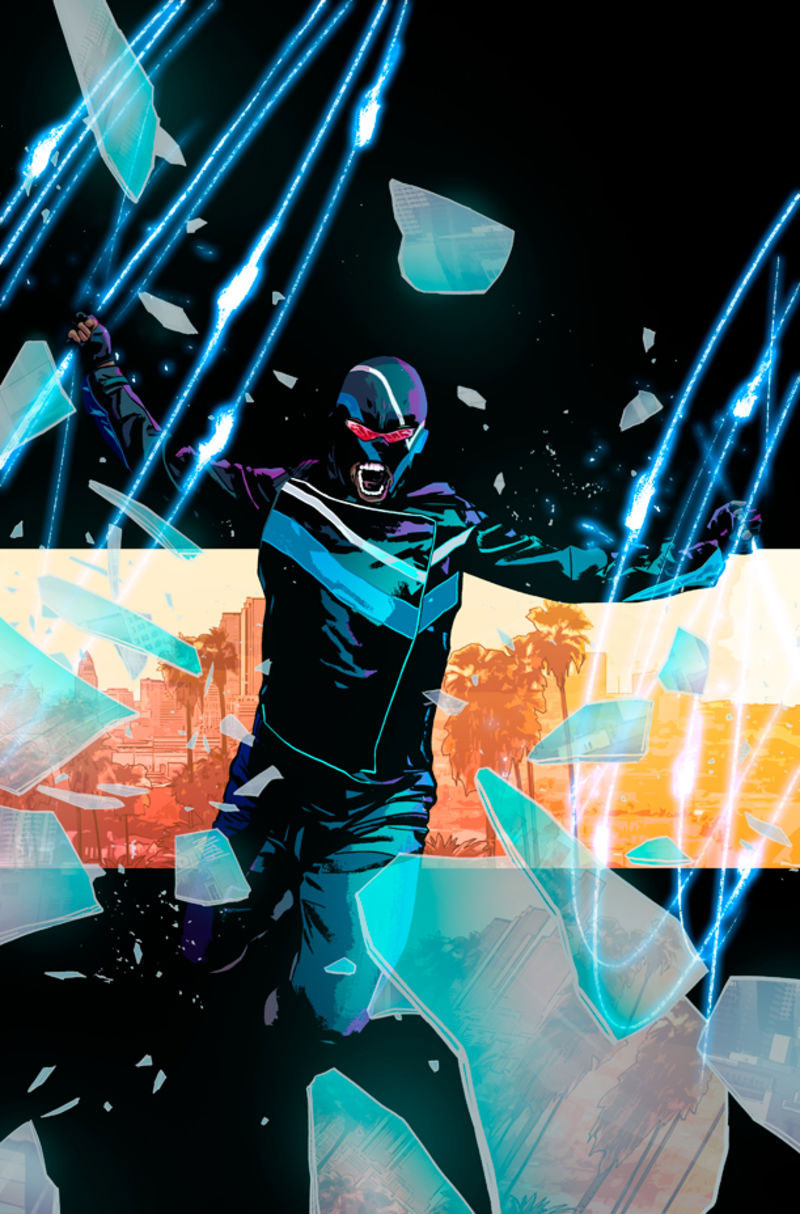 But yeah, I thought it was a nice touch that Dorrie was much more socially aware than Donny and it was even a source of friction between them. It could even be, had things played out in a normal way, that she becomes the masked Vigilante. Her life would have taken a different turn, and she might have left Donny in the dust. But as it happens, the misfortune is such that it doesn’t happen that way. So, who’s left to pick up that mantle? It turns out to be Donny.

Donny might be ill-equipped to do it, at least at the start, but he certainly feels the debt to her. It is his duty to live up to the sense of who Dorrie was. That’s Donny’s mission and the driving part of how he can now be somewhat worthy of what Dorrie was trying to do, to finish the job she started. 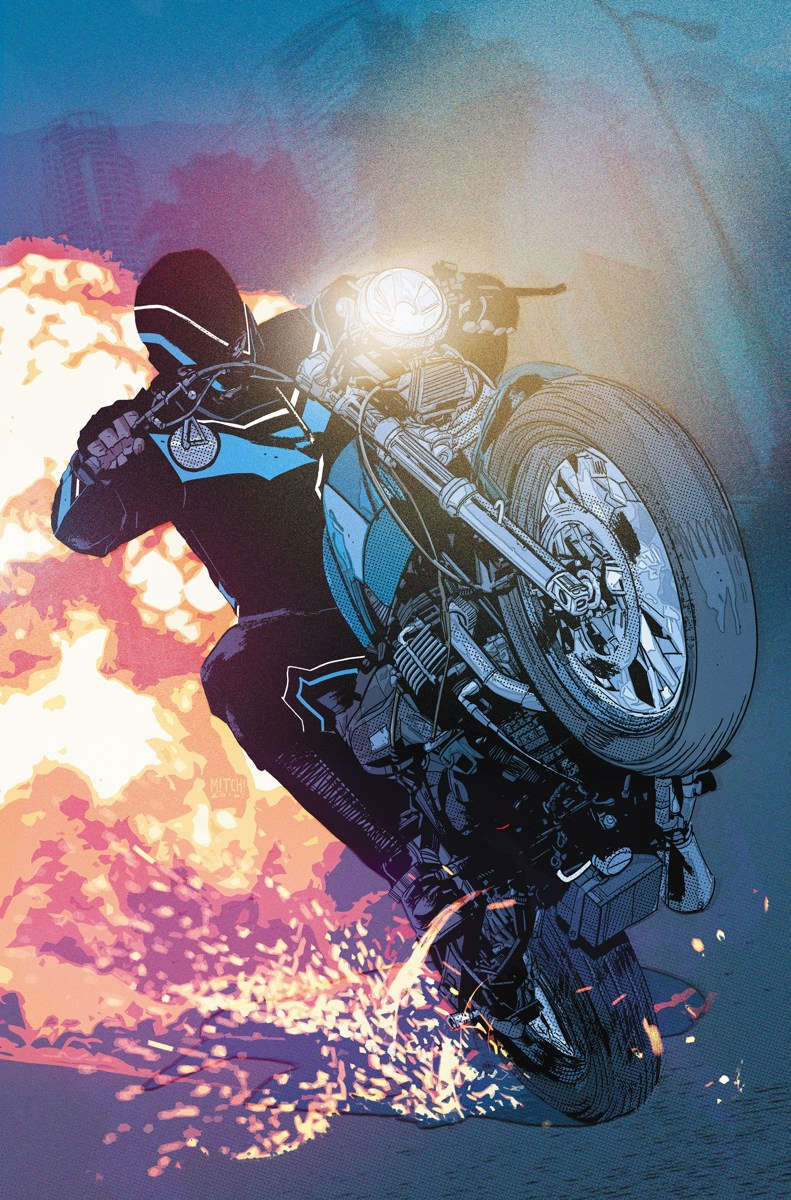 MSG: The concept of the Vigilante at DC Comics really started out as a hardcore Western character, set both in the past and at times, in the present. Do you see parallels between the Western genre in literature and true crime/mystery literature today?

GP: Oh absolutely. There’s no mistake that the gunslinger or gunhawk of what we imagine to be The West — or the Wild West, as it is often called in that period of time after the Civil War — led to the private eye that came along in the 1920s — what Dashiell Hammett and Race Williams developed in particular.

Then, from the private eye, we get that person who operates outside of the law. And it’s not much of a leap to say that the person who operates outside of the law will put on a mask. All of these things have a connection. Not for nothing, you know, as Batman used to be — and often still is — billed as the World’s Greatest Detective. All of these things are kind of in a mix.

It’s also not a coincidence that we imagined the Wild West as we did, and now, for me, there are some parts of the Southland that have that same kind of characteristics. We get this sense in the mini-series that there’s an underbelly. And not just one. There’s several layers as we journey with Donny from one part of the Southland out to the beach and then back to Koreatown, and over to Compton and other parts of southeast Los Angeles.

We get a sense of a territory that’s not often portrayed in our pop culture. One of our goals was to make that come across in the context of telling a story. 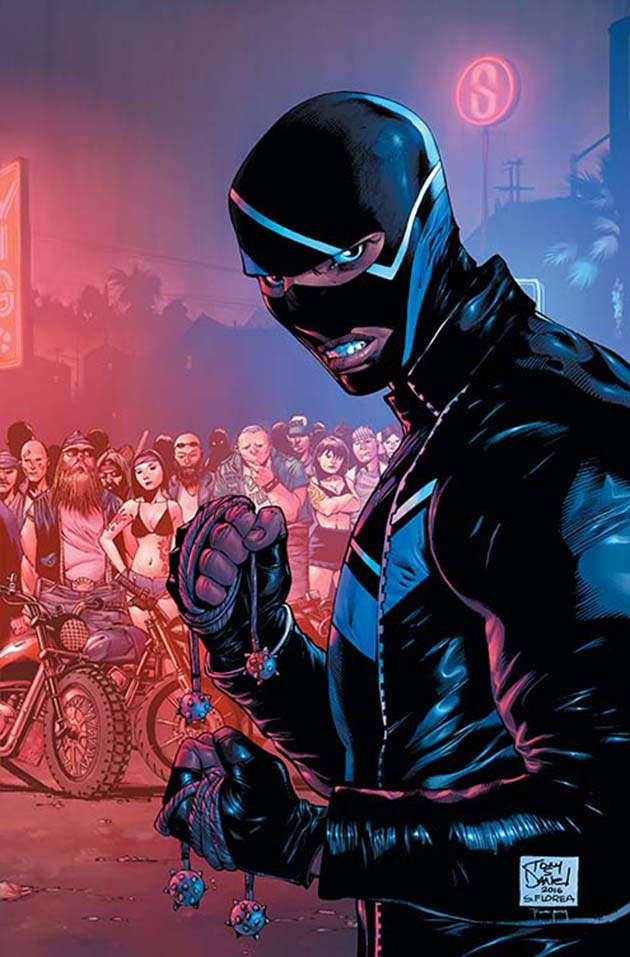 MSG: It’s not just the territory, but also in the idea of the protagonist. I’m looking at the gunslinging cowboy and this idea of the masked vigilante — all the way up to how Black men are portrayed on the news — as an existential threat to law-abiding citizens. Can you talk a little about how this figures in for you in the story, in the crime drama genre, or in general, in terms of the tensions between the police and the African-American community in America?

GP: There’s a lot of layers in that kind of question. In the real world, it provokes the question of how we affect change. If there is an injustice, how do we try to balance those scales? In a writ-large kind of way, that’s going to play out in the next few weeks with the presidential election, in terms of what each candidate promises to do. And then how does that filter down to the state level, the county level, the city level, and finally to the neighborhood level?

I think for me, that’s where a guy like Donny, as the Southland Vigilante, comes in. At the neighborhood level. As I said, he’s just this normal guy.

Now, as this is comics, we had to give him a certain amount of athletic prowess in order to jumpstart his ability. You know, you can’t really come up against the cops and just be out of shape. [laughs] So, it was necessary for him to at least be athletic enough to look good in the costume and be able to move and groove. That was important. 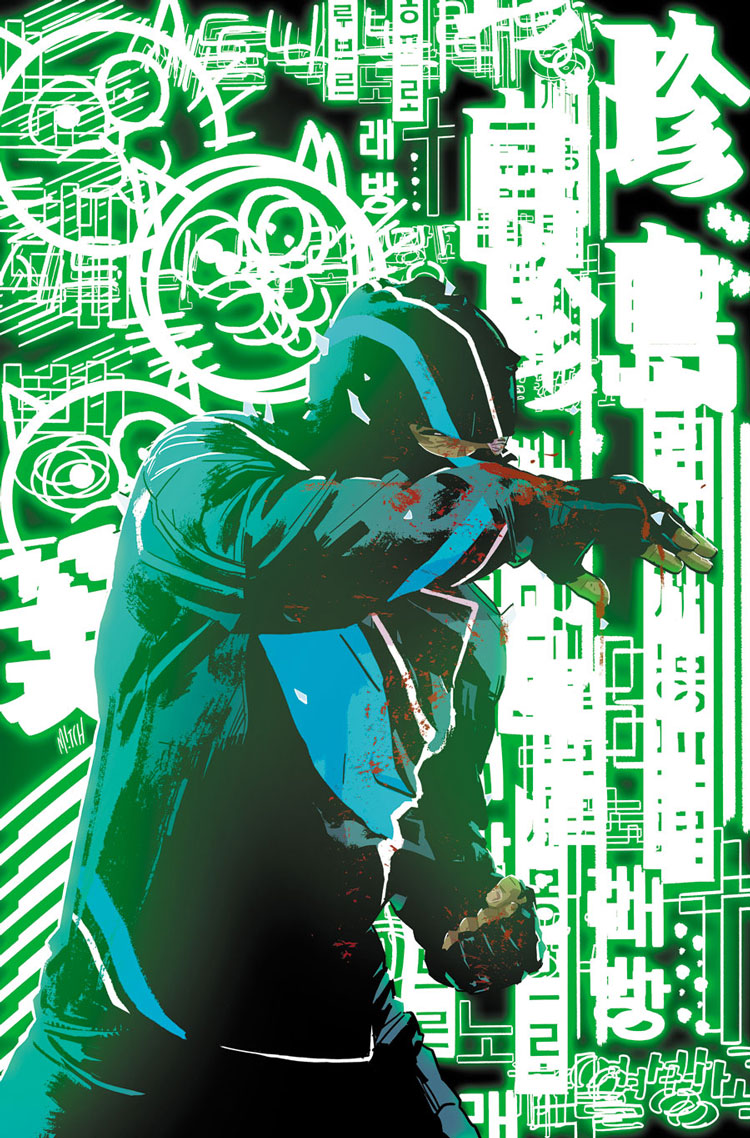 Also, what develops in the story is Donny’s personal quest, seeking justice for the murder of his girlfriend Dorrie. But as he goes about that, he discovers more and grows as an individual and as the person behind a mask. In seeking justice for her and completing her mission, he sees that he is going to affect change and to some degree, try to balance the scales.

That’s what it is. Why do super-heroes go out at night? Why do they do what they do? It’s always about, to a lesser or greater degree, trying to balance the scales. Because if you don’t make that effort, some person or corporation will have their thumb on the scale to create an imbalance. The least you can do is temporarily remove that thumb and give people some breathing room.

MSG: How has the process of developing this world working in collaboration with the artist Elena Casagrande?

GP: I’ve done some other comics work, and of course, I’m hoping to do some more. You always want as much of a synergistic relationship as you can get between you as the writer and the artist. In this case, I just can’t sing Elena’s praises enough. You know, these are just cold words on paper, man, except for the fact that she makes them come alive and brings her own talents as a storyteller to the pages.

I mean, God knows, I want words in my comic books, but if you took those words away, the story would still go on. That’s how strong her work is. You’d still have a great sense of what the story is about, just because of the way her images flow and the way she realizes a world, a city, that’s unknown to her — but she makes it so alive on the page. I’m just so happy with all of it.