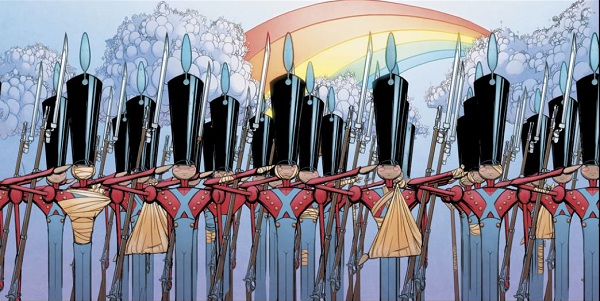 Originally announced at New York Comic-Con 2012, Wars in Toyland reunites creators Joe Harris and Adam Pollina for the oversized graphic novel. Set in the now conquered world of Toyland, Matthew is brought to Toyland by his soldiers and together they march into battle against the teddy dictator, Roxbury. Joe and Adam were kind enough to take time out of their busy schedules and answer a few questions for us here at Comicosity.

Maxwell Majernik: First off, for our Comicosity readers who may be new to Wars in Toyland, what type of story can we expect? 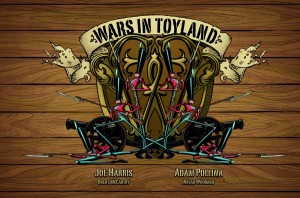 Joe Harris: It’s a dark fantasy set in a world where toys don’t only walk and talk without the help of humans looking to play, but are also locked in a brutal, crushing civil war. It’s the story of a young boy named Matthew who finds himself dragged into world where the toys he and his big brother, Alex, used to play with are all looking at him to be the leader, rather, “The Captain” they’ve been waiting for to lead them against the evil, crushing tyranny of a vile, rotting and mean old teddy bear named Roxbury. But when Matthew discovers that his brother is also here, lost, and likely Roxbury’s prisoner, he feels he’s got no choice but to, somehow, rise to occasion these toys have presented him with and rescue his lost brother if they ever hope to get home again.

JH: For us, I think, the wooden soldiers have always held an appeal that goes back to childhood. I mean, if we’re talking about the classic Laurel & Hardy film that would play every Thanksgiving Day, it’s when the soldiers all gather into formation and begin to march that really sparked my imagination when I was growing up. I suspect Adam would agree.

Adam Pollina: Joe’s correct, the Laurel and Hardy film struck a chord with me that still remains. I still wish Life could be that clear, so ‘Black & White’ 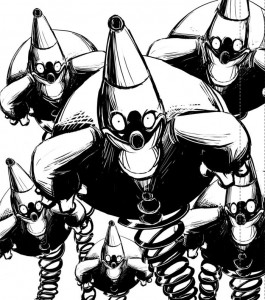 MM: Quotes from NYCC ’12 gave the impression you two are recreating favorite old war battles from your childhoods. Were there any old ideas you had as a kid that might have stuck with you and made it into this story?

JH: Well, for me, the idea of dirtying up some normally pristine and brightly colored wooden soldiers has always appeals… and we definitely do that in here! Wooden soldiers tend to be these ceremonial, iconic toys. But we’re talking about warriors here, and war is always hell so I have come to believe. So let’s see them actually doing battle, suffering losses and triumphing after an arduous, hard-fought skirmish.

AP: For me growing up, I enjoyed creating conflicts with some sense of Logic, a kid’s logic. I would divide my toys into teams – combining Dolls, Toy soldiers, Dinosaurs and Robots into ‘plausible’ armies. Playing the Puppet master, I made an effort to keep both sides evenly matched.

MM: You have both worked together before, on Slingers. How did Wars in Toyland come about between you two?

JH: I believe we first starting talking about Wars In Toyland back during those old Marvel days, but our own shifting relationships with the company, coupled with other considerations regarding whether or not pursuing a creator-owned project like this at a publisher like Marvel Comics at that point in time, made waiting seem like a better idea. We then explored publishing this as a series of young adult novels, but felt this nagging sense that doing it as a single volume graphic novel would likely serve the thing best. Honestly, we’ve been talking about this, on and off, for a number of years now.

AP: I must say, that I held this project very closely for a long time. It was something that resonated with Joe and I from the very first moment the concept of ‘Toys at War’ was mentioned. But like most wishes, they don’t always come true. And so, life went on. But Joe brought our story back to reality and I’m super grateful to him for doing so.

MM:Will the story be self contained just to this hardcover? Do you (or would you) want to continue with these characters for more stories?

JH: Right now, it’s a contained story. Though I’d love to explore this world and these characters again, given the chance. Let’s see how the market reacts. Sequels and spin-offs sound great, to me!

AP: I believe the most wonderful aspect of this Story is the Landscape on which it unfolds, and the limitless amount of characters it engages. It is a colorful and unique Universe with many, many special stories left to tell.

Wars in Toyland will be in comic shops and on sale on July 10th. You can follow Joe Harris on twitter at @joeharris.