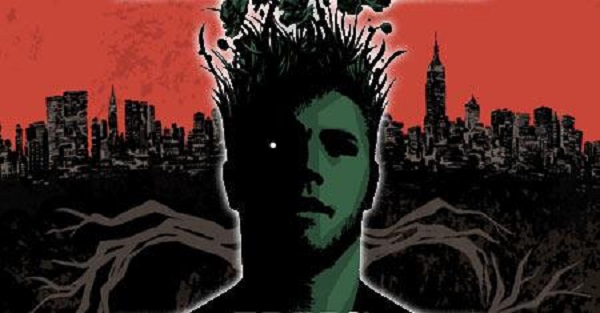 Mother Nature has been blooming for many this spring, including the trees. But what if the trees are the ominous signs of what is yet to come? Artist Jason Howard is tackling a new alien invasion story, with writer Warren Ellis, about these stoic beings in Trees. Here is the solicit from Image Comics: “Ten years after they landed. All over the world. And they did nothing, standing on the surface of the Earth like trees, exerting their silent pressure on the world, as if there were no-one here and nothing under foot. Ten years since we learned that there is intelligent life in the universe, but that they did not recognise us as intelligent or alive.”

Howard was able to give Comicosity a little bit of insight into the style that is being added to this book, due to hit the shelves in a few weeks, on May 28, 2014. 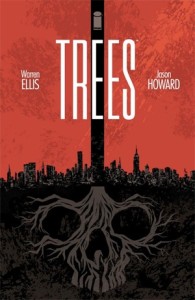 Jessica Boyd: What kind of process or type of conversations took you and Ellis from working on a single reveal panel webcomic that’s gathered together (Scatterlands) into a more traditionally presented comic like Trees?

Jason Howard: Well, when we started on Scatterlands (the first chapter collected here- https://imagecomics.com/comics/releases/scatterlands-1 ) the whole point of it was to do something different and experiment with the format a little bit. It was actually a lot of fun for me, especially from a storytelling place. Because every panel is the same size and they were initally presented online one at a time, I wanted each panel to stand alone more than I might a random panel in a typical comic. When we started working on Trees, it was a return to the format of comics that we are all familiar with. This was really exciting for me because I felt I had learned some things and was eager to bring them back to “normal” comics.

JB: While the story focuses on an invasion by stoic tree-like creatures, the preview pages highlight brutal and futuristic technology. Is this a purposeful juxtaposition with nature?

JH: A little. Especially at the beginning where there is active human technology and the aliens are more passive big things that affect the world around them just by being there, like trees.

JB: While your previous collaboration with Ellis seemed to focus more on a singular character surviving, initial previews of Trees highlight a vast urban struggle with an alien invasion. Do you adjusted your style for each story? 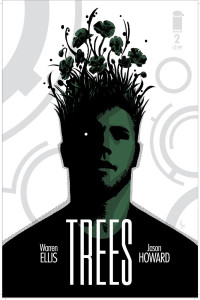 JH: I try to consider what would make sense for the project. At a basic level, I draw the way I draw and my instincts are pretty much the same no matter what I’m working on. But certainly the finish and tone of the art is different on Trees than my previous projects. The main difference from Scatterlands is the approach to color. With Trees the color pallet is way more open, instead of the very limited grey and red palette I used on Scatterlands. Also with Trees I am trying to emphasize the world and scale or bigness of things, so my storytelling and layout approach is a different than say Super Dinosaur where I try to emphasize an awesome T-Rex with robot arms shooting missiles jumping at the camera 🙂

JB: Ellis tends to integrate deeper human and psychological themes into his stories no matter if they’re superhero, criminals or alien invasion stories. In this series you have a group of people who have been living with these invaders, whose intentions are unknown for a decade. How do you try to translate those emotions and experiences in your art for readers?

JH: Really just reading the script, what the characters are saying and how they are reacting to each other. Sometimes Warren’s panel descriptions read like prose and offer internal insight into the character, its really amazing to read but can be a little daunting to try to capture with a drawing. But I try to let it inform how I think about the characters and do my best with the drawing and hope it comes through.

JB: The art that you’ve done in your collaborations with Ellis is a lot more loose and not as traditionally comic book styled when compared to some of your other work, such as Super Dinosaur. Is that a conscious decision that the two of you talk out or is it just something that comes more naturally when reading Ellis’ scripts? 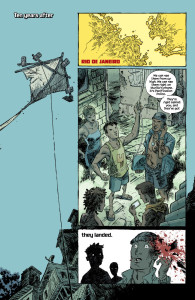 JH: Its more of a natural direction that I wanted to experiment with my art. When drawing a long run on a series (like Super Dinosaur) it doesn’t seem right for me to try drastically different styles, the art defines the world of the story and I don’t want a reader to get pulled out of the story by having everything look different every few issues. Working with Warren on Scatterlands gave me a chance to be looser and more sketchy with my art, a way that I had been drawing a lot more in my sketchbooks, it gave me an outlet for a artistc approach that didn’t really fit in the world of Super Dinosaur. The tone of Warren’s writing on Trees is a little gritty and dirty so continuing that approach seemed to make sense to me. But I still did a lot of preliminary pages just for myself, testing inking and coloring approaches trying to find the right look.

JB: Do you have major influences on your art from artists in the field? Are you constantly looking for new inspiration?

JH: Yes and yes! My early comic book big influences were Todd McFarlane, Joe Quesada, Travis Charest and Dave Johnson. But there were tons more that I would ape drawings from in my sketchbooks. I love style, I love seeing drawings that look like something that could only come from that particular artist. Their own unique interpretation of how the world looks. I love seeing work from new artists that inspire me.

JB: What are your biggest factors with panel design or layout? Is it script direction? Action verse static conversation/talking heads?

JH: Clarity is key. Unless the story requires obscurity for effect or mood, I feel that first step of drawing comics is communicating the simple events of the story. Beyond that its a matter of using the page layout and panel shapes to accentuate movement or design. Sometimes Warren’s scripts will give direction regarding type of panels, but mostly I do what I think will work best for that particular page.

JB: What is your favorite part this series, so far?

JH: Drawing snow! I also really like the cast of characters, I think we have a pretty unique group and they are enjoyable to draw. But mostly I like when there’s robots.

JB: Is there anything else you would like Comicosity’s readers to know about Trees?

While the pre-order deadline for Trees has passed you can still look for a copy with Diamond Code: MAR140475 for $2.99. You can check out Jason’s other series, like Super Dinosaur, and his art on his website: http://www.jasonhowardart.com