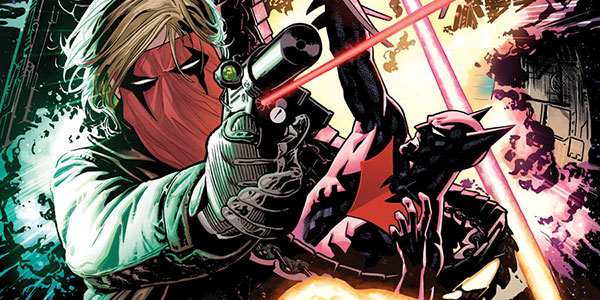 Futures End is off to a devastating start, post-Terry McGinnis’ arrival in the pages of last week’s Free Comic Book Day offering, and at the center of it all is writer Keith Giffen. No stranger to the future from his days as Legion of Super-Heroes scribe — or his current run on Justice League 3000 — Giffen is joining writers Jeff Lemire, Dan Jurgens, and Brian Azzarello in crafting a world five years from now that is quite a bit darker than our own. The writer was willing to do a quick chat about the characters he’s working on, how he conceptualizes the future, and more! 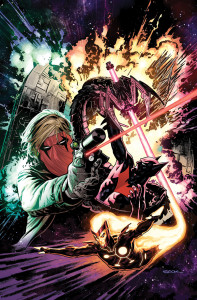 Matt Santori: Thanks for taking time out of the weekly grind to chat Futures End, Keith! How has the collaboration process with the other three writers been going so far?

MSG: Dan and Brian were quick to share with me that Grifter is your character to direct in Futures End. What drew you to the character initially?

KG: He was one of the two (the other being King Faraday) left on the table once the smoke cleared.  I tend to step back when “who’s doing what characters” is being determined.  I just take whoever’s left.  They tend to be the most flexible characters, in terms of rethinking them, and that’s more attractive to me than Superman or Batman or whoever.  I really believe that there are no bad characters, just bad handling.

MSG: What advantages or challenges are you experiencing in writing a book set 5 years in the future, character-wise, technologically, culturally?

KG: For me it’s remembering to advance the technology.  Since I don’t care about continuity, story’s not a problem and putting five more years on a character can really enhance the character so, for me, it’s the damn technology that becomes an issue.

MSG: With issue #1, we see the wholesale destruction of Stormwatch as we know it, with at least Apollo meeting his end for certain. What led to this decision and is there an Authority waiting in the wings? 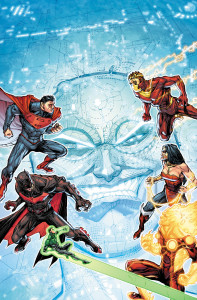 KG: You’d have to ask the Canadian kid that.  Bloodthirsty bunch those Canadians…

MSG: Do you have another character, other than Grifter, who you are particularly responding to in the process of writing the book?

MSG: One of the things both of your ongoings, Futures End and Justice League 3000, have in common other than a future setting is the concept of a man (or people, as the case may be) out of time. How does this perspective help drive the narrative for you and are there any other similarities for you in working on the two books?

MSG: Speaking of Justice League 3000, we’re still reeling a bit from the first set of revelations about the Justice League’s identities. What should fans be watching out for as we enter the second half of the first year?

KG: The revelations will keep on coming.  Hal’s got a stunner heading his way.  You’ll also meet the Injustice League and a few of the members of that group should raise some eyebrows.

KG: Don’t get too comfortable with anything or anyone.  We’re REALLY untrustworthy.  Really.